The Dirt on the Soap

Written by Art Williams, Photographs by Tod Grubbs and Cynthia Hestand | From the November 2016 issue | Updated: October 14, 2016 | Filed Under: Culture 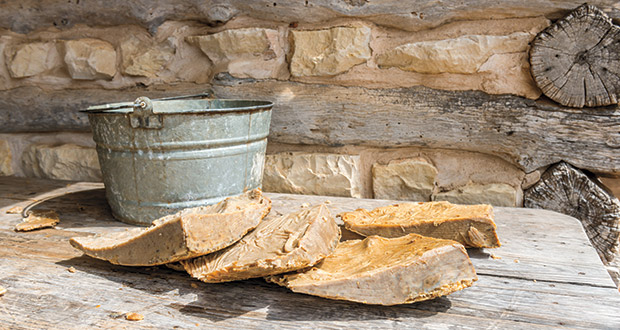 It’s 9 a.m. on a Saturday, and most of the farm chores have already been done.

Stephen Baethge, wearing a straw hat, muddy boots, a work shirt, and rust-colored pants with suspenders, throws some logs on a pit, strikes a match, and settles in for yet another task—making a batch of soap for the Sauer-Beckmann Farmstead at Lyndon B. Johnson State Park & Historic Site in Stonewall.

Baethge, a park ranger, points to a display of soap he made previously. “I’m gonna tell you, I made that out of some pretty rank lard—rancid animal fat and bacon grease—because the fresh animal fat was too valuable for cooking and baking,” he says.

Baethge makes lye soap the old-fashioned way as part of the Sauer-Beckmann farm’s interpreta-tion of the hardscrabble life and times of rural Texans in 1915 to 1918. By operating the farm according to early 20th-Century practices, the park offers insight into Texas’ rural roots and the childhood of President Lyndon Johnson, who was born nearby in 1908. Available in the gift shop for $4 to $6, a bar of the farm’s lye soap gives visitors a tangible link to the farm’s hard-working history.

The Sauer family first settled the farmstead in 1869, building rock and log cabins and raising 10 children here. The Beckmann family acquired the farm in 1900, grew cotton, and added on to the structures. In the 1960s, a Beckmann descendent sold the farm to the Texas Parks & Wildlife Department.

That meant meat preservation created its own rituals, and soap is a byproduct of this cycle. At the Sauer-Beckmann farm, butchering pigs and cows is done once or twice a year, in the fall, winter, or early spring, “because Mother Nature is giving us natural refrigeration,” Baethge explains.

After butchering the animals, the park rangers start the curing process, which includes coating the meat with a curing mixture of salt, sugar, and preservatives; and grinding meat scraps to be stuffed into sausage casings. Bacon and hams are kept in a covered pan for the first 10 days; on a daily basis, farmers turn the meat and pour out any excess liquid. After 10 days, the meat is placed in a crock of lard for storage.

After issuing a warning that it’s no pretty sight for vegetarians, Baethge lifts up a lid on an earthenware crock and dips a metal hook into the fat (in the hot summer months, the lard is liquefied), fishing out a sausage link. The cured meats are used in the daily meals served to park employees at noon.

“They didn’t throw anything away—everything was utilized,” Baethge says, even down to the eggshells, which were fed back to the chickens to fortify their own eggshells.

The lard that preserves the meat is kept for cooking and baking until it goes rancid, which can take a year or two. “It kind of smells like latex paint if you sniff on it,” he says. And then it gets a new life as lye soap, which was used to treat poison ivy and chigger bites; wash hands, floors, and laundry; and for the weekly bath. Occasionally, it was also used as punishment in the mouths of defiant children.

As the lard, lye, and water cook together over the heat of the open fire, the mixture goes from white to pale yellow and from liquid to a pudding consistency. Soap was originally made with wood ash, but lye—technically known as sodium hydroxide or caustic soda, and commonly known as drain cleaner—replaced ash as a safer and more predictable substitute. In their day, the Sauers and Beckmanns would have purchased lye from a general store. It takes hours of cooking to achieve just the right amount of viscosity, which Baethge tests by dipping a paddle into it.

After the soap mixture is cooled and dried, Baethge cuts it into bars. He notes that if you check the ingredients list on a bar of Dove soap, you’ll find “sodium tallowate,” the technical term for the exact ingredients he’s using today. The farm’s lye soap is unscented, no fancy fragrance added. “One hundred years ago, they were only taking one bath a week, so if they were clean, they were smelling pretty good,” he jokes.

The process of making lye soap was likely one of the easier tasks on the farm when the settlement’s first inhabitants lived here. In that sense, the Sauer-Beckmann farm’s soap-making demonstration drives home the amount of hard work that daily life required in the Texas countryside in the early 20th Century.

“It’s changed my life at home, to be honest with you,” says Baethge, who’s been working here for 12 years. “It’s made me very grateful for what we have today. Very grateful.”