The Heart of Country Music 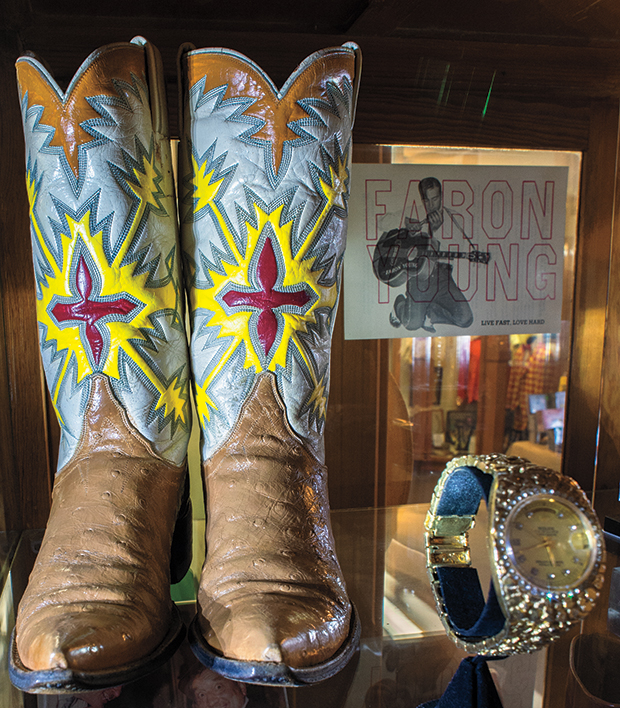 The museum’s Faron Young display includes custom boots made by M.L. Leddy’s of San Angelo and a glitzy watch.

Tracy Pitcox still remembers the first record he ever bought. “It was a cassette of Ernest Tubb’s album Thanks A Lot,” he recalled. “I was 15 years old, and I paid $3.95 for it at Kmart in Brownwood.”

Along with the Country Music Museum, the town is also home to the Heart of Texas Historical Museum. Read more about the museum at texashighways.com.

Since that purchase, Pitcox, the founder of the Heart of Texas Country Music Museum in Brady, has done as much as anyone to honor traditional country music and preserve its stories and sounds. Pitcox launched his popular radio program, Hillbilly Hits, when he was 17 on his hometown station in Brady, KNEL, and he still holds court on Thursday and Saturday evenings with four hours of classic country music. Setting the tone at the outset, the first record Pitcox played on the show’s 1989 debut was Hank Thompson’s “Kindly Keep It Country.”

“Every item in the museum has a story,” Pitcox said during a recent tour. The story behind Ferlin Husky’s first guitar, a Supertone acoustic, underscores the hardscrabble origins of many country musicians. The guitar is part of an extensive display of Husky memorabilia that includes the platinum record for his signature tune “Wings of a Dove.”

“Ferlin was born into a family of Missouri sharecroppers,” Pitcox said, “and his mother traded some chickens to get him this guitar.”

A collection of Hank Williams rarities, framed under the title “The Show He Never Made,” includes an original poster, flyer, and ticket from his 1953 New Year’s Day gig in Canton, Ohio. Hank died en route to the concert, the result of years of hard living. The items were in a scrapbook kept by Hank’s mother that somehow wound up in a Mason antiques store, where an Austin benefactor found them and donated them to the museum.

The museum even managed to expand its collection as the result of a theft. In 2005, a burglar stole a Fender Stratocaster owned by Brady native Dave Kirby, co-writer of “Is Anybody Goin’ to San Antone?” (Police recovered the guitar about six months later in Taylor.) Betty Oyler, the grandmother of the technician who installed a museum security system after the break-in, had been a neighbor of Western Swing pioneer Bob Wills in Oklahoma. Wills had given Betty a fiddle, encouraging her to learn to play. Her family later donated the fiddle to the museum.

Centenarian Flo Sauers of Victoria donated one of the rarest recordings in country music history: the Jimmie Rodgers picture disc—a vinyl record with artwork on the grooved area—of “Cowhand’s Last Ride,” including the Blue Yodeler’s image and signature. “Flo’s husband had been a huge Jimmie Rodgers fan,” Pitcox explained, “and her nephew Frankie Miller is one of our Heart of Texas Records artists.” Rodgers recorded the song nine days before he died in 1933, and it was pressed in a limited edition. Very few copies survive.

Among the memorabilia, spectacular stage outfits dazzle in museum displays just as they once did under opry and honky-tonk lights. The museum features several suits that Hollywood tailor Nudie Cohn made for Hank Thompson, including the Silver Dollar suit with leather-and-rhinestone silver dollars that Thompson wore in Las Vegas. Thompson is best known for blending honky-tonk with Western Swing, and his artifact donations include the master recording of his landmark 1952 hit “The Wild Side of Life.” (I was especially excited to see the sheet music for his 1947 ditty “Humpty Dumpty Heart.” Metro Music, my father’s company in Dallas in the 1940s, published the song.)

“Hank was a great friend of ours,” said Pitcox, who reminisced in his book, Legendary Conversations (Heart of Texas Country, 2007), about the intimidation he felt when he first interviewed Thompson at the tender age of 16. “Before his death he asked that all memorials to him be sent to the museum. The first two checks we received in his memory were for $1,000 from Vince Gill and $500 from George Jones.”

One beautiful Nudie suit, which Ray Price wore for the cover of his 1961 Greatest Hits album, recalls the days when the singer called his band the Cherokee Cowboys. An image of an elaborate Cherokee headdress fills the back of the jacket, and eagle feathers adorn the pant legs.

A soundtrack of Heart of Texas Records artists enhances the museum’s musical atmosphere. Several artists—Justin Trevino, Darrell McCall, and Norma Jean—have been so moved by Pitcox’s mission to preserve traditional country music that they relocated to Brady. Norma Jean—who was billed as Pretty Miss Norma Jean during her years on TV’s Porter Wagoner Show, the Ozark Jubilee, and the Grand Ole Opry—occasionally serves as a museum docent herself.

“Sometimes I’ll even sing as I give a tour,” she said. “That’s the great thing about country music. The artists love the fans as much as the fans love the artists.”