Written by Art Williams, Photographs by Will van Overbeek | From the April 2017 issue | Updated: March 20, 2017 | Filed Under: Culturemade in texas 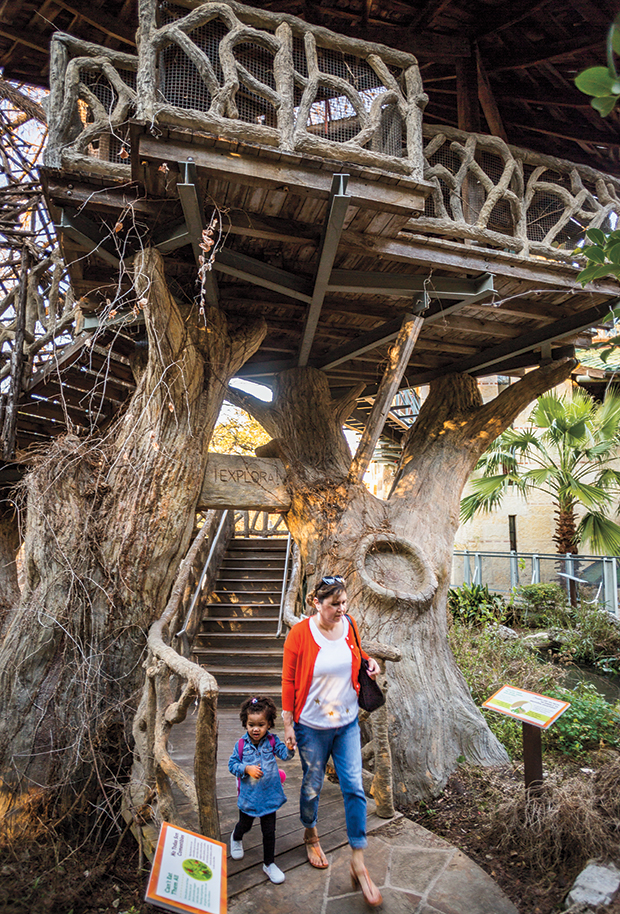 Dionicio Rodriguez’s cement sculptures look so much like tree trunks and branches, they even fool wily woodpeckers. Woodpeckers have been spotted pecking the concrete “bark” hoping to find a tasty insect lurking within the rails of Rodriguez’s footbridge in Brackenridge Park or his bus-stop palapa at the corner of Broadway and Patterson.

Donald Tucker shares details of the craft at TheGardenArtForum.com, and his book, An Introduction to Sculpting Ferrocement Faux Bois, is available online.

Created in San Antonio from the 1920s to the 1950s and called faux bois (false wood) and trabajo rústico (rough work), Rodriguez’s utilitarian cement pieces, crafted to appear as though made of wood or stone, can be seen at the San Antonio Museum of Art, the Spanish Governor’s Palace, the Japanese Tea Garden, and other Alamo City sites. Comfort, Castroville, Port Arthur, and Houston also preserve Rodriguez’s work, and his work in seven other states includes an Old Mill in Little Rock, Arkansas, that graces the opening frames of the epic film Gone With the Wind. Fifteen of his Texas works, and six in other states, are listed in the National Register of Historic Places. (Rodriguez is second only to Frank Lloyd Wright in the total number of locations listed on the register.)

Rodriguez’s great-nephew Carlos Cortés continues the tradition with such works as the concrete grotto on the Museum Reach of the San Antonio River Walk and an in-progress entry-way to a new wing of the Witte Museum. In her 2008 book about Rodriguez’s life and work, Capturing Nature, Patsy Pittman Light traces the origins of his medium to a French gardener named Joseph Monier, who first used wire and steel to reinforce concrete around 1850, crafting faux bois garden pots and other containers. Since Monier introduced it, only a handful of known artisans have produced such work.

Rodriguez, born in Toluca, near Mexico City, in 1891, learned the basics of faux bois from a contractor. He worked on a rock fountain at Lago del Bosque de Chapultepec in Mexico City before coming to San Antonio around 1924.

Across the Rio Grande

Rodriguez was likely brought to Texas by Dr. Aureliano Urrutia, who may have known the artist in Mexico before the doctor himself moved north of the Rio Grande, according to Light. She lists eight extant pieces Rodriguez made for Urrutia’s elaborate San Antonio garden, Miraflores. On Hildebrand Road, in a corner of Brackenridge Park, the remaining 4.5 acres of Miraflores are owned by the city and await restoration. While tours may be offered on a limited basis in the near future, park visitors today can stand on Hildebrand Road and peer into the garden remnants to see the cement saguaro cactus, a faux hollow tree entry gate, faux wood steps, a palapa bench, and a small grot-to housing wingless cherubs.

The majestic faux stone arch that once rose above the Broadway entrance to Miraflores now stands in the Latin American Collection at the San Antonio Museum of Art. The arch features Talavera tile depicting peacocks, flowers, winged lions, and the Virgin of Guadalupe. “There’s a juniper tree on either side of the arch,” Miraflores researcher and descendant Elise Urrutia says. “Dr. Urrutia may have sought to recreate the atmosphere of the floating gardens in his hometown of Xochimilco, and there were juniper trees there.”

Back at Brackenridge Park, one of the most distinctive of Rodriguez’s many footbridges spans a flood channel of the San Antonio River near Miraflores. Light describes it as “a curved structure resembling an elongated arbor.” Built in 1925, the bridge attracted the attention of Popular Mechanics magazine in 1927, which reported its effect on local woodpeckers. Light notes that humans are often fooled as well. Rodriguez’s works challenge the viewer, she writes, to “separate the real from the art form” because of his “careful molding of bark textures, with worm holes, peeling sections, and lichen, and his sensitively formed drooping and twisted branches and heavily grooved tree trunks.”

Houston artist Donald R. Tucker, 72, crafted his first faux bois some 25 years ago and teaches a summer class in the practical yet whimsical folk art at San Antonio’s Southwest School of Art. Tucker first saw Rodriguez’s work as a child on a trip to San Antonio. The memory stuck. He explains the distinguishing factor of North American trabajo rústico—as pioneered by Rodriguez—is the finish coat. “The historic French work is a sanded mortar aggregate that limits the amount of detail,” he adds. Rodriguez’s version utilizes Portland cement and water, without any aggregate, and is very difficult to master. He mixed a secret recipe of water and chemicals to produce the realistic finish. Extremely protective of his formula, the artist broke empty containers of the solution so that no one could retrieve enough of the liquid for analysis. He did, however, share enough of his secrets with assistants like Carlos Cortés’ father, Maximo Cortés, so the tradition could be preserved and passed down.

“When I first began studying this art form in the early 1990s, only Carlos Cortés was producing any work,” Tucker notes. “Today, I have students from Australia, France, Costa Rica, and throughout the United States.”

Tucker, whose own works include a large outdoor “tree” bench at Houston’s Rehab Bar on the Bayou and something he describes as “a hitchin’ rail for hippos” at Baytown Nature Center, notes many of Rodriguez’s pieces have been receiving needed restoration. “The reinforcing steel that was utilized in these historic structures oxidizes and expands, causing problems with the whole piece,” says Tucker, who is working with Carlos Cortés to develop a set of standards for the restoration and preservation of this type of work that they hope will be adopted by the Texas Historical Commission.

During World War II, with materials in short supply, Rodriguez used actual rock in some pieces, including a dramatic grotto and Stations of the Cross constructed with honeycomb limestone at San Antonio’s Shrine of St. Anthony of Padua. Time will tell if Rodriguez’s trabajo rústico, some of which is approaching the century mark, will last as long as natural stone.

“We might not have this work at all in Texas if he hadn’t come north, as so many Mexicans did, during the turbulent era after the Mexican Revolution,” Tucker muses. “So I like to say that we owe these pleasures to Pancho Villa. Thanks Pancho!”