Track to the Future: Train Museums 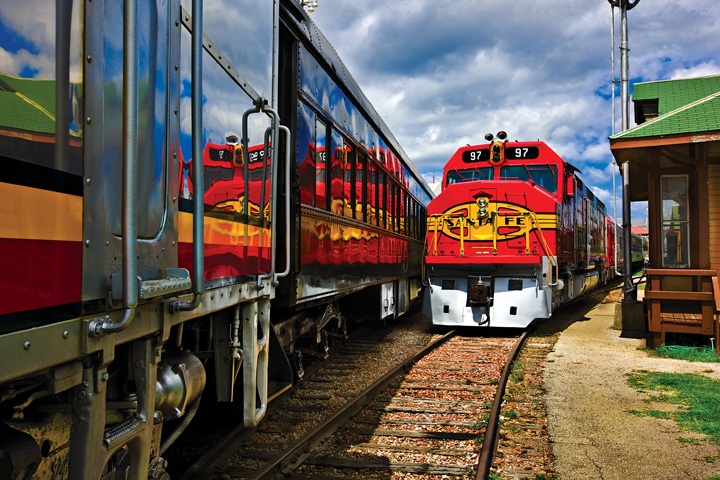 At the Museum of the American Railroad in Dallas, dozens of locomotives and train cars illustrate railroading history. This 1967 Santa Fe locomotive pulled the famous Super Chief passenger train between Chicago and Los Angeles. (Photo by J. Griffis Smith)

A few blocks north of the Fort Worth Convention Center and its supporting cast of restaurants, wine bars, and plush hotels, the railroad still rolls into town much as it did in 1876, when the city became a major shipping point for livestock headed to northern markets. There are no cattle today, but freight cars carrying everything from auto parts and coal to orange juice rumble through every few hours, the full-throated whistles lending a note of nostalgia to the downtown streetscape. Periodically, blue-and-silver passenger trains, operated by Amtrak these days, arrive at the new Intermodal Transportation Center from points north and south.

On a recent Thursday afternoon, I waited-feeling vaguely cosmopolitan- on the Fort Worth rail platform for my mom to arrive by train from Oklahoma
City. When she arrived, looking refreshed and toting a half-finished novel, she declared the four-hour journey “100 percent pleasant,” though she allowed that a sighting of Cary Grant or Eva Marie Saint, from Hitchcock’s North by Northwest, would have been nice. Times change, we agreed. When I returned her to the depot a few days later after a weekend of R&R in the Metroplex, I envied her easy-breezy trek back to the Sooner State.

How is it possible, I wondered, that railroads—which, along with windmills and air-conditioning, facilitated the settlement of the West—have been relegated to icons of nostalgia for most of us? Are they still relevant today?

To learn more about the role of the railroad in American life, I visited three Texas museums dedicated to train history. The Martin & Frances Lehnis Railroad Museum in Brownwood displays nearly every type of railroad that exists, from tiny model trains to full-size cars and locomotives (known collectively as “rolling stock”). The Railroad and Heritage Museum in Temple houses extensive archives of the Santa Fe Railway, and is a working train station as well as a museum.

The Martin & Frances Lehnis Museum occupies an airy, new building across from the city’s original Santa Fe Railway Depot and Fred Harvey House and displays nearly every type of railroad that exists, from tiny model trains to full-size cars and locomotives (known collectively as “rolling stock”). Today, the buildings serve as the Brownwood Visitor Center, but outside, a hulking, oil-burning, 1080 Baldwin locomotive, built around the turn of the 20th Century, entices visitors to explore the area’s railroad history in the adjacent museum.

Inside, surrounded by displays of rail–road art and advertisements, china, photographs, lanterns, and other memorabilia, model trains of several sizes and configurations whooshed around tracks in the main room, their rhythmic chug-a-chug-a-chugs sounding like a steady rain.

The first railroad line in Texas, I learned, a short track in the Houston area, was chartered in 1850; soon railroad companies by the hundreds were laying track. By 1910, rail lines connected ports along the Texas Gulf Coast to the forests and oil fields of East and North Texas, along with rail hubs like Fort Worth and San Antonio. Commerce flourished, but so did recreational travel. “The railroads opened the way for people to settle out west,” says Museum Director Mary Irving, “but they also made it possible for people to go on vacation out west.”

I asked Museum Director Mary Irving about the museum’s idyllic Western paintings; the large, geometric reliefs; and the brightly colored brochures on display. Looking for ways to pique travelers’ interest in traveling by rail, Irving told me, the railroads commissioned paintings and other for the trains’ public spaces.

The museum also displays dozens of collectible china settings—cups, saucers, plates, and the like—which were used in the railroad dining and lounge cars. “Each one of the railroads had a theme going,” says Mary. “For example, one of Santa Fe’s most famous and collectible patterns, known as Mimbrefio, features Southwestern motifs. Mimbrefio was designed by Mary Colter, the architect responsible for many of the structures at the Grand Canyon.”

Outside, with tremendous grain silos as a backdrop, you can tour a restored Santa Fe depot building, a 1931 caboose, and a 1929 Santa Fe Railway Pullman business car, which features a parlor, a dining room, three bedrooms, and a bathroom—outfitted with the space-saving innovations and sleek
design made famous by cabinetmaker-turned- industrialist George Pullman.

Temple’s Railroad and Heritage Museum, on the second floor of the renovated 1911 Santa Fe Depot building near downtown, interprets the history of railroading through the perspective of what it meant to small towns like Temple, which was the division point of three lines: north to Fort Worth, south to Galveston, and west to New Mexico. “The depot was the center of every town,” says Museum Director Judy Covington. “People came to the depot to see who was coming and going and which products people were receiving from the Sears catalog, to get their mail, and to learn what was going on in the world.”

Downstairs, on one end of the building, Amtrak passengers board the Texas Eagle, bound for destinations as far north as Chicago. Upstairs at the museum, several rectangular rooms overlook the tracks, allowing views of arriving and departing trains; visitors can even listen to dispatchers and engineers courtesy of an audio scanner on a viewing platform.

Hundreds of items depict aspects of life along the rails, including multicolored lanterns (employees used a standard signaling system to communicate with engineers); massive anvils and other forge tools (many jobs at the roundhouse involved ironwork), and collections of china settings, advertisements, and memorabilia from the long-gone Harvey House. The museum also shines a light on the railroad’s roles in communication by telegraph and in delivering mail. A working telegraph, a device that originally operated on lines strung along the railroad right-of-way, transmits the U.S. Constitution in dots and dashes. And regarding the mail: U.S. mail was first transported by train in the 1830s, I learned, and in 1838, Congress stipulated that all railways were post roads. In fact, government mail contracts with passenger trains helped keep the trains profitable until the 1950s, when the U.S. Postal Department began to transfer mail-carrying functions to trucks.

But for many train enthusiasts, the archives department here gets their wheels turning. “We have tens of thousands of photographs—of nearly every passenger car, locomotive, and railroad car imaginable,” says Archivist Craig Ordner. “Typically, researchers make an appointment to search our archives, and we can scan the images for them.” 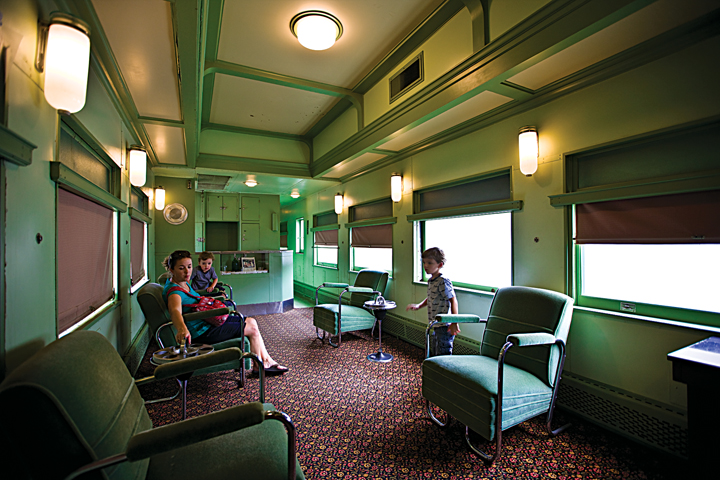 Passengers in this Santa Fe club-parlor car, on display in Dallas, could request a cocktail or snack from a car attendant by pusing a button on the wall. (Photo by J. Griffis Smith)

On less than two acres on the northeast corner of Dallas’ Fair Park—and crammed caboose-to-cow-catcher on tracks near the new DART light rail station—the Museum of the American Railroad’s collection of rolling stock showcases some of the railroad industry’s most impressive innovations. Here’s the 1942 Union Pacific No. 4018 Big Boy, the largest steam engine ever built. Next to it, you’ll find the Pennsylvania Railroad’s all-electric No. 4903—a streamlined, Art-Deco locomotive that dates to 1940, designed by Raymond Loewy. And a few steps away, you can see the 1910-11 Pullman sleeping car Glengyle, an all-steel car that provided accommodations for family and dignitaries on Franklin Roosevelt’s funeral train in 1945; an 1896 “Bobber” caboose; and a 1914 Santa Fe parlor-club car, outfitted with plush seats and a full bar.

”As you can see,” says longtime Operations Manager Gari Latham, as we stepped over tracks, climbed arrow metal steps, and explored some of the museum’s 36 rare cars and locomotives, “we’ve run out of room to display our collection. While the move to Frisco is bittersweet in many ways, there’s no doubt in my mind that it’s the best thing for the museum.”

Sometime in 2010, after this year’s state fair, the cars and locomotives will move some 40 rail miles to Frisco, a northern suburb of Dallas that was once a stop on the St. Louis-San Francisco Railroad. “It all fits together,” says Latham.

Thanks to a detailed, self-guided tour brochure, you can view the museum’s rolling stock at your own pace, but I was lucky enough to have longtime Operations Manager Garl Latham provide a personal tour, explaining the many engineering advances that he believes guarantees the rail’s role in the future of transportation. “One of the reasons trains are so energy efficient, much more so than other forms of transportation, is that they operate with so little friction. You have steel wheels and steel rails, and a very small contact surface between them.”

“Most people don’t realize that almost everything we consume here in Texas arrives first by train,” he continues. “Trucks may bring products to the stores,
but trains bring products to the towns and cities.” And for train enthusiasts such as Latham, there’s no better way to learn about the country’s history than
through the perspective of train traveler to witness America’s ever-changing vistas from a reclining window seat. On a train, there’s plenty of leg room, freedom to walk around, and time to ponder the promise of fortune and adventure.