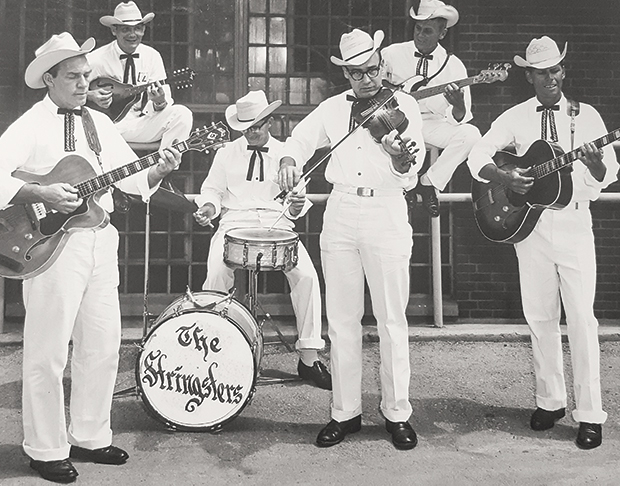 A circa 1960 photo of the Stringsters, a prison band that performed at the Texas Prison Rodeo and on Thirty Minutes Behind the Walls. (Photo courtesy of Texas Department of Criminal Justice)

Inside the administrative and archives office of the Texas Prison Museum in Huntsville, I thumb through old photographs and booklets that archivist Sandra Rogers has pulled for me to examine. One photo from 1941 shows more than a hundred people—men, women, and children—waiting in line to enter an imposing red-brick building.

Caroline Gnagy is the author of Texas Jailhouse Music, A Prison Band History, published in 2016 by Arcadia Publishing & History Press.

One might assume that these photos were taken at a college or community theater. In fact, it was a much more ominous location: the Texas State Penitentiary in Huntsville. And the white-clad men and women on stage were all convicted felons.

Although music isn’t typically associated with the “Texas tough” image of the state prison system, the Huntsville unit of the Texas penitentiary—nicknamed the Walls Unit—for decades had a rich tradition of inmate musical groups that were immensely popular in their time.

From the early 1930s through the mid-1980s, the Walls Unit allowed and even encouraged inmates to play music and perform as a tool for rehabilitation and public relations. Today, the Texas Prison Museum explores the history of the prison system and its music with displays of photographs and vintage instruments, as well as with its archival collection of photos, recordings, and programs.

Prison bands first captured the public’s imagination with the launch of the Thirty Minutes Behind the Walls radio program on March 24, 1938, through 50,000-watt WBAP in Fort Worth. Beset with public criticism over reports of brutality, prison officials aired the musical variety show, featuring their most talented inmates, to burnish the prison system’s image. WBAP broadcast the shows live from Walls and other units, sometimes in front of a live audience. The reaction from Texans—who were trying to pull themselves out of the Great Depression—was immediate and overwhelmingly positive. Thirty Minutes Behind the Walls aired for 10 years and even won broadcasting’s prestigious Peabody Award in 1940.

Black-and-white photographs in the museum document the radio program, including pictures of the Goree All-Girl String Band, a group of young women musicians. Led by prison matron Mrs. Heath, the Goree Girls, as they were known, were among the most popular acts on Thirty Minutes Behind the Walls. The photos show the band posed in portraits with their instruments and performing at the Texas Prison Rodeo.

Held between 1931 and 1986 in an arena at the Walls Unit, the rodeo provided another venue for prison musicians to perform. The museum’s exhibit includes a large horse-drawn buggy from the rodeo. Painted maroon and labeled “Texas Prison Rodeo” in block letters, the wagon transported musical acts and prison officials to microphones set up in the center of the arena. Bands would perform during intermissions between rodeo events featuring inmates riding broncs and bulls.

Across the room from the Texas Prison Rodeo wagon, more of the prison’s musical history shares a large display case with baseball uniforms, team photographs, and game programs from the prison baseball team, the Huntsville Prison Tigers. Prison officials organized the team and built a ballpark in 1924. The team played area semi-pro teams until they disbanded in 1943, a casualty of budget-tightening during World War II.

The display case’s music section features photographs of prison inmate acts from the 1930s through the ’70s, including an early male country-and-western band called the Rhythmic Stringsters. Another photo shows an African American gospel quartet, while others show orchestra and pop combos from the Ramsey Farm in Brazoria County and the Wynne Farm in Walker County. 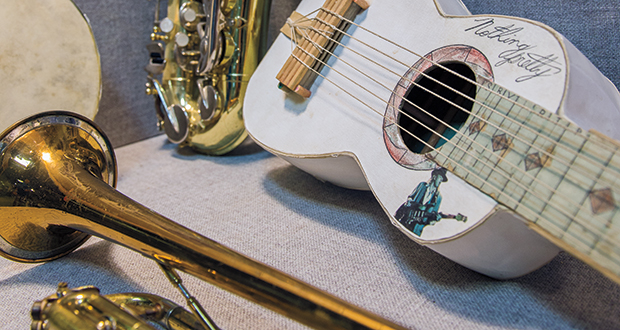 Also on display is a 1978 souvenir LP recording of the Eastham Unit band. In the ’70s, the Texas Department of Criminal Justice recorded a series of prison-band albums and sold them as souvenirs at the prison rodeo. Each year’s souvenir album featured original music, mostly country-and-western, from the male-only prisons. Next to the LP are several musical instruments, including an old wooden guitar and a well-worn saxophone. Particularly eye-catching is a banjo made from a cereal bowl, a paper towel roll, and string.

“I mean, just picture it—some inmate sitting around in his bunk somewhere, playing this banjo,” says Rogers, who notes that the instrument’s history is mysterious—like so many other items in the museum’s collection.

The Texas Prison Museum chronicles not only music in the penitentiary, but also other elements of life behind its walls in the 20th Century, from the uplifting to the macabre. Some inmates passed the time making artwork, including items on display like leather purses and wallets, and a large white saw blade, once used at the Ellis Unit, painted with images of Texas Prison Rodeo participants.

A mock jail cell inset into a long wall gives visitors a sense of prison living conditions in the early 20th Century, while another display showcases dec-ades of prisoner-made contraband in the form of crude-looking shanks, files, corkscrews, and razors. A detailed exhibit chronicles the histories of notorious death row inmates such as Karla Faye Tucker—a murder convict who was executed in 1998—and Ray Hamilton and Joe Palmer, members of Clyde Barrow’s outlaw gang. Another case displays the handgun retrieved from the body of Bonnie Parker after police in Bienville Parish, Louisiana, killed her and Barrow—aka Bonnie and Clyde—in 1934.

Perhaps the museum’s premier attraction is a re-created death chamber, complete with Old Sparky, the infamous electric chair that put 361 inmates to death between 1924 and 1964. The high-backed wooden chair with leather straps and buckles shines under harsh spotlights, making an ominous shadow on the wall behind it.

Back in the administrative office, Rogers, the museum’s curator of collections, shows me one of her favorite artifacts: a yellowed booklet with Art Deco typeface dated July 4, 1923. “It’s a vaudeville program,” she grins, “for a show that was put on by the inmates at the Walls Unit, which is fascinating to me. It was very beautifully done and full of interesting information.”

The prison museum archives also house a bound book of radio transcriptions and a handful of souvenir programs from Thirty Minutes Behind the Walls. These artifacts contain treasure troves of information about the radio show and its stars, including photographs and detailed information on inmate acts.

One compelling photograph shows an African American inmate looking earnestly into the camera as he plays his harmonica into a WBAP microphone. The caption reads, “A.B. Johnson, carefree harmonizer on the harmonica, specializes in novelty numbers and imitations which make him one of the most unique speciality [sic] entertainers on the program.”

Rogers says former prison officials and musical directors donated some of the museum’s musical paraphernalia, while she collected some with the help of Texas Prison Museum Director Jim Willett—himself a former warden at Huntsville—when they both joined the museum in the early 2000s. Occasionally, the descendants of former inmates or prison officials add to the museum’s collection with information and artifacts.

Not long ago, Willett says, the daughter of a former warden shared enlightening information about the Goree Girls. “She came out and interviewed with us and brought pictures,” Willett says. “Suddenly we went from peeking through a little peephole in a fence to getting a whole board knocked out—to where we could really see some things.”

The Texas Prison Museum’s research has become even more important in recent decades as inmate musical groups have all but disappeared from the prison system—a result of legislative changes and a general shift in policing and pris-on culture. The museum’s extensive archives, fascinating ephemera, and rare artifacts provide a rare glimpse of the historical importance of music to the many inmates who once played “behind the walls.”