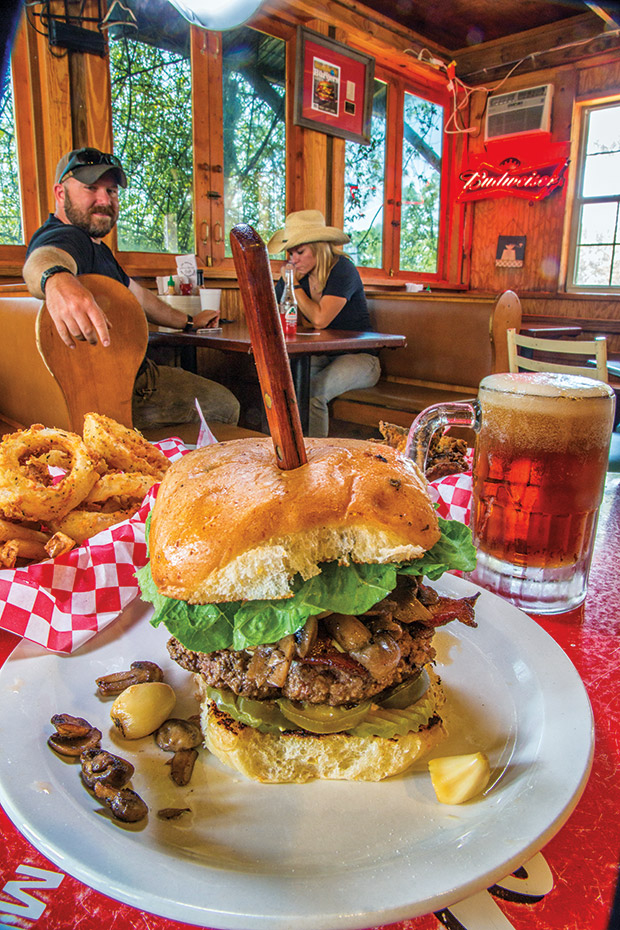 If you’re a recent arrival in Texas, you may not have heard that our state gave birth to the hamburger, but now you know: Allegedly created in the late 1880s at an East Texas café owned by a man named Fletcher Davis, the hamburger was introduced to a larger audience at the 1904 St. Louis World’s Fair—and the rest, as they say, is history.

Need proof? It’s right there on a historical marker on a building on the north side of the Henderson County Courthouse square in Athens. Certainly, the burger has evolved in marvelous ways since then, now enjoying toppings that range from Stilton cheese to pineapple slices, Hatch green chiles, and avocados. East Texas continues to make a strong showing among your five favorite burger joints in the state, while San Antonio and Hill Country towns do themselves proud, too.

Originating in Longview in 1980, Jucys outpaces its competition with a devoted population of followers. Now with five stores, Jucys is a power to be reckoned with. At each location, beef is ground daily for the hamburger patties and French fries are cut every morning from russet potatoes. When you bite into a burger hot off the griddle, the taste and texture attest to handcrafting that you don’t find in a uniform patty from a box. You’ll need two hands to eat this bad boy, and a generous appetite to match. Among topping temptations, the bacon and blue cheese combination is hard to resist, but you can’t go wrong with the burger laden with grilled onions and melted cheddar cheese. Oh, and the buns are always toasty-warm from the grill, too. Loyal fan Amanda Hayes McCary writes, “Jucys’ are by far the best in Texas. You’d be hard-pressed to find a better burger.”

Here’s where you can really have it your way, and then some. Atop your burger or cheeseburger, choose from such additions as chili, avocado, roasted garlic, fresh garlic, blue cheese, grilled onion, jalapeño, bacon, mushrooms, and green chiles. What’s more, your bun choices include jalapeño cheese or wheat. It’s hard to resist a place that posts a sign reading, “Want fast food? McDonald’s is 12 miles to your right.” Call 830-990-8004; alamospringscafetx.com

A fixture in the central city since 1977, Chris Madrid’s quickly became so popular for its hamburgers that the restaurant dropped nearly everything else from the menu. Hundreds of fans pack the place at lunch, but the line moves quickly. The signature Tostada Bean Burger (available in two sizes, like the rest of the burgers) comes topped with homemade refried beans, crushed tortilla chips, cheese, and onions. Regulars drizzle the sandwich with hot sauce from the salsa bar; add jalapeños if you dare.

The Burger Grind earned glowing reviews upon opening in 2014 for making a fine burger by blending its own ground chuck with ground brisket.
Customer lines stream out the door during lunch and dinner hours, as word-of-mouth buzz for the Bacon Cheddar, Mushroom Melt, Bleu Bomber, A-1, and other specialty burgers keeps spreading. Bonus points go for the kaiser wheat, toasted onion, sesame twist, and gluten-free bun options.

Anyone traveling US 281 over the years has become familiar with the burger joint sign slashed by a lightning bolt in the logo. Begun in Lampasas as a drive-in restaurant in 1950, the original Storm’s once was a regular dining spot for Elvis Presley, who was stationed at nearby Fort Hood. Old-fashioned, flat patties are made daily in the stores’ kitchens for the special half-pounder, which comes with all the trimmings and can be enhanced with pepper jack cheese, chili, jalapeños, and bacon. Sourdough and wheat buns are also available. www.stormsrestaurants.com.