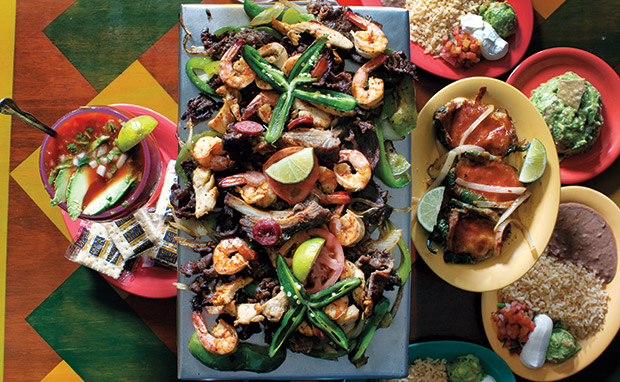 The East Texas city of Tyler has changed since I was a youngster, when only a few places served a bland version of the richly spiced cuisine favored south of the border. An influx of Hispanic families in recent dec-ades, however, has spawned a variety of quality Mexican eateries.

Three of my favorites—Don Juan Mexican Restaurant, Don Juan on the Square, and Mariscos DJ’s, all owned and operated by the Barron family—have rekindled my love of interior Mexican cuisine and culture. The Barrons serve the foods they grew up with in the central Mexican state of Guanajuato.

Eating at their restaurants takes me back to the summer I spent with my wife and kids in San Miguel de Allende, Mexico. Among the offerings, you’ll find thick, fried sopes (corn cakes) topped with beans and meat and queso blanco; spicy chicken enchiladas topped with crumbly, slightly salty queso fresco; tortas (sandwiches) layered with avocado and meats; and giant chilled shrimp cocktails. Made from scratch using fresh ingredients, these dishes—along with brightly colored decor and hand-carved wooden furniture—remind me of our days in San Miguel. There’s even wall art showing scenes of Guanajuato state. And when I eat a soft corn tortilla filled with grilled steak, avocado, cilantro, and shredded cabbage, I recall the origins of the Barrons’ true Texas success story.

Juan Barron first visited Texas from Mexico in 1977 on a mission. He was determined to bring his son Arturo, who was working in a Tyler meat-packing plant, back home to Salamanca, Guanajuato. Once in Tyler, however, Juan liked what he saw: a good place, nice people, and opportunity. So he moved in with Arturo and began working with his son at the plant.

In those days, Arturo played soccer every weekend at a field near downtown. For lunch, he often brought tacos that his dad had made—spicy barbacoa (Mexican barbecue) wrapped in fresh corn tortillas in the style Juan knew growing up. Other players and fans sampled Juan’s tacos and wanted their own. So Juan obliged by loading a five-quart pot with his tacos and selling them on weekends out of the back of his 1966 Ford Falcon. Soon, demand required a 40-gallon pot, and eventually Juan found himself selling tacos from a concession trailer at two soccer fields.

Taco customers began referring to him as “Don” Juan, a Spanish term of honor. By then, his wife, Prisca, had moved to Tyler to help out at the trailer. Prisca had learned to make traditional Mexican dishes from her mother while growing up, and she dreamed of running her own restaurant. “We worked three days a week at the soccer fields, and I liked it so much that I wanted to work every day,” Prisca recalls. “We had to have a restaurant.” 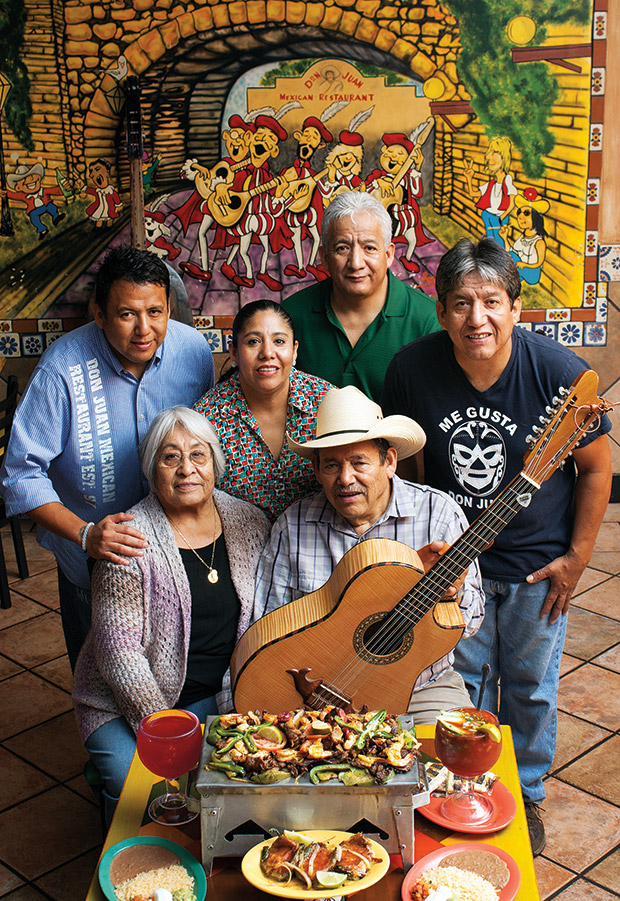 In 1997, the Barrons took a leap of faith and opened Don Juan Mexican Restaurant in a former neighborhood grocery a mile east of downtown Tyler. The small eatery had only 10 menu items and 10 employees, mostly family members. Don Juan’s reputation spread by word of mouth through the downtown business district and the nearby medical district, and workers packed the place during lunch and came back for more at dinnertime. The restaurant, by now managed by the Barrons’ daughter Juanita and her husband, Angel Alfaro, added tables and expanded the dining room and kitchen. Eventually the Barrons’ five sons and two daughters all moved to Tyler to join the growing family enterprise.

In 2002, the family opened Don Juan on the Square. It offers the same menu as the original Don Juan, a list now boasting 42 items ranging from flavorful tortilla soup and besitos (mozzarella-stuffed jalapeños), to chiles rellenos and enmoladas (mole-topped enchiladas). The two eateries also serve breakfast dishes such as migas, huevos rancheros, and chilaquiles. In 2011, the Barrons opened a seafood restaurant and sports bar called Mariscos DJ’s. Its 50-item menu specializes in dishes from Mexico’s Pacific coast, ranging from various seafood cocktails and soups to a dish called Enpapelado de Mariscos (a saucy shrimp, octopus, and fish dish that’s baked in a foil wrapper). I love dining at Mariscos DJ’s on Friday and Sunday nights when a six-piece mariachi band entertains. (The music recalls Don Juan Barron’s early years in Mexico as a street singer and guitar maker. He still makes stringed instruments for family members.)

The Barrons also run a catering service that has handled private events for as many as 600 people. No wonder the Don Juan family of restaurants was named Tyler’s Hispanic Business of the Year in 2014. The three restaurants embody togetherness… literally. All sit within a mile of each other along East Erwin Street. Together, they boast 100 or so employees, roughly half of them family members, comprising a new generation of Barron restaurateurs in the making.

At 78, Juan monitors the goings-on at all three locations. Prisca, now 76, retired from the kitchen a few years ago to oversee the restaurants’ finances. She and Juan also remind all who will listen of the secret ingredient contributing to their culinary success. Says Prisca, “Everything we make here, we make and serve with love.”