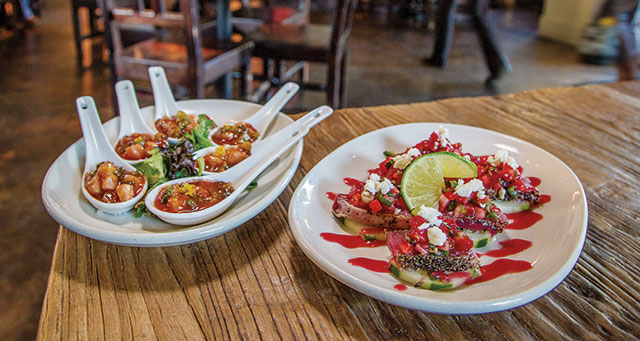 These days, whenever I bump into someone from my hometown of Victoria, the conversation inevitably turns to Bloody Mary shrimp shooters. On the menu at the Pumphouse Riverside Restaurant & Bar, a hangout that is breathing fresh air into the culinary landscape of South Texas, these wee hybrids of a Bloody Mary and shrimp cocktail are tasty morsels that you savor in one spicy swig.

While the idea did not initially appeal to me, our waiter suggested them, so I went for it, and found myself happily surprised. The sweet flavor of the shrimp perfectly complemented the vodka and tomato juice of the Bloody Mary, and my husband and I polished them off.

Indeed, “happy surprise” is a fitting theme for my whole evening at the Pumphouse. Because, going in, I wasn’t even sure what a pumphouse was. But I soon learned that for more than a century starting in the 1880s, this compound of weathered buildings—now listed in the National Register of Historic Places—held the pump, boilers, and other equipment that moved water from the Guadalupe River to be distributed to the citizens of Victoria. According to Victoria County deed records, the Republic of Texas granted the land to the township of Victoria in 1841; Sam Houston himself signed the property title. In the early 1890s, local architect Jules Leffland built what is now the oldest surviving part of the pumphouse—a charmingly faded brick structure with graceful interior arches where the bar area now stands.

If you arrive past dark, the Pumphouse might suggest an oasis—a building of many brightly lit steel casement windows surrounded by a handsome stucco wall, gardens full of palmettos and purple agapanthus, and a 150-year-old iron gate open wide. Just outside the gate is a Texas Historical Commission plaque explaining how the English-born William Wheeler arrived to town in the 1880s to set up the waterworks here. The life and times of William Wheeler, who presided over the pumphouse for approximately 40 years, is a bit of Victoria’s history that I had never known.

Entering the restaurant is like stepping into a grand country estate. Soaring ceilings, burgundy brocade curtains, and rows of dramatic, tiered chandeliers define the space, which is large enough to hold 130 people inside, and about 160 on the outside terrace.

We had made a reservation, which was good, because it was a weekend night and the place was hopping, with every table full. Soon we were sitting within the brick arches of the original pumphouse building, sipping glasses of cabernet while our children reveled in the Sprites they are allowed on special occasions.

They call the menu here “Classic American,” and it leans toward such fare as potato skins, burgers, and fried mac-and-cheese—although fish dishes like grilled salmon with a side of quinoa are options, too. Chef Cliff Denton is a Victoria native and culinary-school graduate who worked on the East Coast and in San Antonio before returning to Victoria to take the helm here. His popular Sunday brunch, which includes New Orleans-style shrimp-and-grits and the “Texas Benedict,” a cheesy polenta cake with pan-fried chorizo, is a happy mimosa-drinking ritual for many locals.

After those celebrated shrimp shooters, we dug into our tasty entrées: pecan-crusted chicken breast drizzled with lemon butter and tender beef fillets heaped with caramelized onions (with buttered macaroni for the kids). As the children fell asleep at the table, I looked around at the many cheerful groups of people and marveled that this historic site had ever been close to demolition.

In fact, if it hadn’t been for Dennis and Louise Patillo, this building might have been relegated to history. Surrounded by a chain link fence and unmanned by the 1980s, the building seemed doomed. In 2005, the City of Victoria estimated it would cost at least $250,000 just to tear it down. Luckily, one councilman suggested they not spend the money, but rather wait it out to see if anyone would buy the place.

In spring of 2010, the city put the building up for auction, and the Patillos purchased it. Eighteen months of extensive restorations, landscaping, hiring, and menu-planning later, the Pumphouse opened for business.

The Patillos had never intended to be restaurateurs. But when the couple began dating in 2001, Dennis, who lived in Houston at the time, visited Louise in Victoria over the Christmas holidays. “When he came over the top of that hill in Riverside Park for the first time,” says Louise, “he saw the old pumphouse and said, ‘Someone should put a restaurant there.’ Never in our wildest dreams did we imagine that a few years later it would be us.

“Many of our friends thought we were crazy,” says Louise. “They warned us about how hard it is to make a restaurant succeed. But Victoria had a lack of destination restaurants, no place really to eat outside, and no development on the river here. All those things put together made us feel like it would work, that we could do it.”

Count me among the many visitors who are glad they did.