Honk If You Heart Tailgating

Tales and recipes from the Parking Lot Gourmet 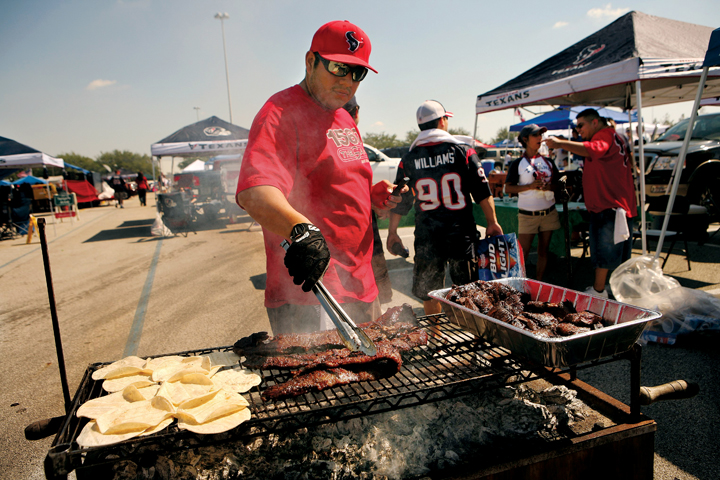 Tailgating in Texas is not just a casual, snacks-for-friends-only affair: These cooks often feed hundreds of fans. (Photo by Paul S. Howell)

In the parking lot of Houston’s Reliant Stadium, a few hours before the Houston Texans played the Carolina Panthers, I witnessed a scene that forever changed my attitude about tailgating. My Sunday excursion to the stadium fell under the umbrella of “research” for my book The Tex-Mex Grill and Backyard Barbacoa Cookbook, and I hoped to find a few extra recipes that afternoon.

I expected to encounter some fanatical football fans drinking beer and ask them what they were cooking for lunch. What I actually discovered in the stadium parking lot that day looked like Woodstock on wheels with Weber grills. Just outside the stadium’s main gate, I climbed a ladder bolted on the side of a repurposed school bus to an observation deck on top so I could gain some sense of what I was in for. From that vantage point atop the bus, I was amazed to see thousands of smoky fires in all directions. And I could make out more white plumes rising from remote parking lots where other tailgaters were cooking, more than a mile away.

Houston Texans officials estimate that 30,000 people tailgate before the average home game. In a recent survey, 52 percent of Texans fans said they ate in the parking lot before the game. When the Texans play Monday Night Football at home, the crowd swells and the cooking gets even more serious. That’s when the turduckens and the whole hogs show up.

Why do these people do all this work? What’s the point of the elaborate rituals associated with tailgating? Rabid tailgaters will tell you it’s to create fan camaraderie and support the football team. But these motives hardly explain the massive undertaking that tailgating in Texas has become.

It all started with the college football crowd. If you’ve ever been to a Longhorns football game in Austin, you’ve probably encountered the burnt orange-clad tailgaters grilling Central Texas sausages and fajitas in the parking lots just north of Scholz Garten, just a few blocks south of the University. Flour tortillas and Shiner Bock are found in abundance. And if you’ve experienced a football game at Kyle Field in College Station, you’ve walked right through the tailgaters who gather under maroon flags in the shadow of the stadium. Ask them what they are cooking and they all claim to be grilling Bevo.

Tailgating at college football games traces its roots back to the traditional picnic lunch your mom and dad brought along for the family to eat after the long drive to the big game at their old alma mater. Bringing a grill and roasting weenies would have been considered a big deal back then. But tailgating started drawing larger crowds after it achieved a boost in popularity from regular cable television coverage. With several hours to fill on game day, shows like ESPN’s College GameDay started paying attention to what the fans were cooking in the parking lots. And the camera crews found an interesting array of local favorite dishes on display. There was bratwurst at the University of Wisconsin, barbecue down south, and shrimp along the Gulf Coast. Interviews with tailgaters became a regular feature of game-day coverage. Following all that media attention, the cooking and the showmanship kicked into a higher gear and started getting more elaborate.

The connection between tailgating and the team spirit of college football fans impressed professional sports organizations enough to change their dismissive attitudes about fans cooking in their parking lots. The Houston Oilers originally banned tailgating at the Astrodome in Houston. But when the Houston Texans debuted in 2002, the team made tailgating a part of the game-day tradition at Reliant Stadium. With all the team flags, tents, cushions, coozies, and other team-logo-emblazoned paraphernalia snapped up by free-spending tailgaters, the NFL probably decided that tailgating could be a profit center.

These days, tailgating is everywhere. At Jimmy Buffett concerts, the Parrotheads gather with Landshark beer, margaritas, and paradisiacal cheeseburgers. At NASCAR events, each track has its own food themes (baby-back ribs at the Kansas Speedway, pulled pork at Richmond International Raceway, and anything with chipotle barbecue sauce at Fort Worth’s Texas Speedway).

Tailgating started out as a culinary pep rally, but somewhere along the way, it became a sport unto itself. I love these gatherings because they are the purest form of culinary competition-a place where great cooks go to show off in public.

In the small city of 30,000 tailgaters I surveyed in the Reliant Stadium parking lot that autumn afternoon, I could see all different kinds of cooks. And nearly all of them were putting on a performance. A white-haired gentleman named Sal Ramirez sat behind his vehicle, grilling on a tiny charcoal grill not much bigger than a shoebox. He was cooking a couple of boneless, skinless chicken breasts for himself and a lady friend. But his grapefruit marinade caught my attention.  When I asked about his secret, he pointed out that he picked the red grapefruits from his own backyard tree.

Nearby, Jacob Trevino flipped his special-recipe stuffed hamburgers. The half-pound patties combine ground chuck mixed with chopped black olives, chipotle peppers, several kinds of cheese, and Lipton Onion Soup mix, he told me. Inside each patty, he creates a cavity and stuffs it with cheddar and chiles. Trevino hunted me down a few hours later so I could try one of his Tex-Mex stuffed burgers. (It was terrific.) Another tailgater named Gabe Gonzales handed me a roasted jalepeño stuffed with cream cheese.

Wild game is especially popular at football games. I have seen elk, wild boar, and venison served at tailgate parties. Game typically impresses fellow tailgaters because you can’t always buy it at the grocery store or order it in restaurants. Besides, I suspect that in many households, mom is eager for dad to get that deer meat out of the freezer. (That’s the way it was when I was growing up, anyway.)

Some tailgaters give food away to fellow fans. In the south parking lot in front of Reliant Stadium’s main gate, the Raging Bull Tailgaters, past winners of the “Tailgater of the Year” award (which is paid in grocery store coupons), serve free food to hundreds of people they have never met before. Each week this team of eight spends $2,000 on food. Typically the menu includes half a dozen briskets, 10 racks of ribs, six pork loins, 30 pounds of chicken wings, 100 pounds of sausage, 40 pounds of shrimp, 20 pounds of fish steaks, and 100 pounds of smoked boudin. There are seldom any leftovers.

Years ago, there was a similar spirit at Texas barbecue cook-offs. But the rigid rules and rising costs ruined all that. Today, barbecue cook-off teams at the Houston Livestock Show and Rodeo Barbecue Cook-off (which is also held in the same parking lot) are required to carry hefty million-dollar liability insurance policies. Successful teams seek corporate sponsorships to defray the expenses. In exchange for sponsorship, the team serves as a caterer for the corporation’s functions. A corporate wristband is required to join the party. With all that rigmarole, the barbecuing that was once a joy for the happy tailgaters turns into a job.

In contrast, I’ve found that tailgaters grill whatever they want, just for the fun of it and to see how it turns out. Some put on a big show and some cook quietly with class. Either way, there’s always something new to see, eat, and talk about.

Feed Yard Saloon, another Reliant Stadium Tailgater of the Year, serves brisket and beans to the public from a modern chuck wagon. Family Feud visits all kinds of tailgating events, driving a school bus painted half maroon and half burnt orange-the team colors of archrivals Texas A&M University and the University of Texas at Austin. This team of tailgaters serves gourmet tailgating fare, including chorizo-stuffed quail and grilled chicken in cilantro cream sauce.

I visited with the owners of a Mexican-American meat company who proffered a savory slice from a wild boar cooked in a caja china, which is a Cuban pig-roasting contraption that includes an oven/box with a mesquite-fired grill on top.

Next to trailered grills the size of my mid-sized car, I enjoyed medallions of venison backstrap served on hot biscuits with gravy, cheese-stuffed jalapeños wrapped in venison sausage, and grilled shrimp and pineapple kebabs. But I also learned useful information from people sitting in lawn chairs next to modest propane grills where they prepare asparagus, artichokes, and countless delicacies wrapped in bacon.

Tailgaters are incredibly ingenious. They can bake or steam on the grill with a little aluminum foil. Margarita mix straight out of the bottle becomes an easy marinade for pork, and Bloody Mary mix doubles as a great shrimp cocktail sauce. Bacon is ubiquitous because it serves as the butcher’s string, cooking oil, and garnish of tailgate cuisine.

The secret to tailgate grilling is lots of advance preparation. Tailgaters tinker with the seasonings and pre-cook things at home in the kitchen so that when they get to the stadium, there’s nothing left to do but throw the meat on the grill. Take it from the tailgaters, whether you’re cooking in the parking lot before the big game or entertaining in your backyard, do the prep work a day in advance. Then on the day of the party, relax and enjoy.

Sal Ramirez sat behind his pickup truck grilling chicken. He had marinated two boneless, skinless chicken breasts in red grapefruit juice and seasoned them with paprika and lemon pepper.

“You baste the chicken with more grapefruit juice while it’s on the grill,” he said as he demonstrated his technique. There were more grapefruit sections ready to garnish the finished chicken, which he served in slices over salad greens. “The grapefruit comes from a tree in my backyard,” Ramirez told me. He looked to be in his late sixties or early seventies, and he said he used the skinless chicken because he was watching his cholesterol.

Pound the chicken breasts flat between two sheets of plastic wrap. Combine the garlic, Mexican oregano, juice from one grapefruit, and olive oil in a mixing bowl. Add the chicken breasts to the mixture and marinate for at least 4 hours or overnight. Discard the marinade.

Heat the grill. Season the breasts with salt and pepper and grill over hot coals for 2 minutes on each side. Move the chicken to a cooler part of the grill. Cook for 6 to 8 minutes basting with the juice from the 2nd grapefruit until cooked through. Heat the tortillas on the grill, turning often. Transfer the chicken breasts to a cutting board and slice them into long strips. Place the chicken strips on a serving platter. Bring to the table (or tailgate) with the warm tortillas, grapefruit salsa, and other condiments such as chopped lettuce or black olives. Invite your guests to make their own fajita tacos.

Try this tangy salsa on grilled chicken or fish.

Remove the skin, seeds, and membrane from the grapefruit and dice the sections.  Combine with the other ingredients in a medium bowl and mix well. Allow to mellow for half an hour in the refrigerator for the flavors to combine.