Hot off the Griddle 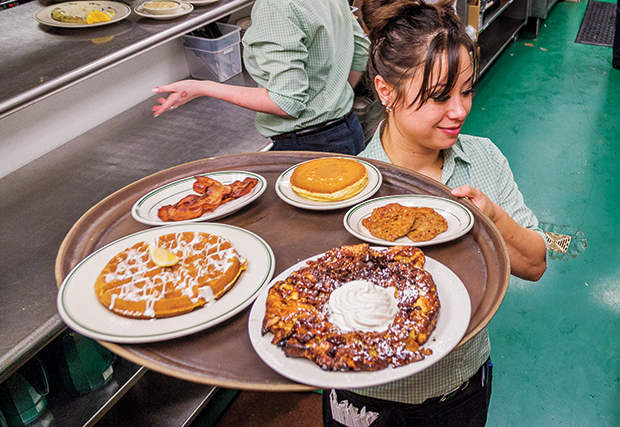 Apfel Pfannekuchen (pictured in foreground to the right)

Like many Texans who have a fondness for pancakes, I keep a list of favorite places to eat them. Magnolia Pancake Haus in San Antonio recently joined that list. On a recent visit, after perusing the menu at length and admiring the dozens of commemorative souvenir plates that serve as decoration, I ordered Magnolia’s “world famous” buttermilk pancakes with blueberries. The short stack came cooked to perfection, evenly browned and fluffy, with a fresh, slightly sweet taste.

“People always try to figure out what we put in our pancake batter,” says owner Robert Fleming. “We use all fresh ingredients but keep the recipe simple: butter, sugar, flour, buttermilk. It’s the proportions that make it special, and also the fact that we make our batter fresh throughout the day. Fresh ingredients make for a great pancake.”

Most of the restaurant’s menu items are made from scratch, he adds. “We make our own syrup, do our corned-beef from scratch, cure our own bacon, and we even smoke our pork shoulder for the pork hash. We don’t cut corners.”

Along with the famous pancakes, the restaurant is well-known for its overstuffed omelets, including an unusual jambalaya version. “It’s a traditional, New Orleans-style jambalaya, with chicken, smoked sausage, bell peppers, celery, and onion—but in an omelet,” he says. “It’s my personal favorite.”

Fleming graduated from culinary school in Chicago in 1975 and worked as a chef or general manager at a long list of hotels and restaurants in several cities, including San Antonio, Minneapolis, and Dallas. In 1998, he and his wife, Sheila, decided to return from Big D to San Antonio, where they had met and married. Fleming had always exhibited an entrepreneurial streak, and he wanted to put down roots for their daughter, then a sixth-grader.

A pancake house made sense for two reasons. First of all, focusing on breakfast meant he could be at home with his family for dinner. Second, he had a special recipe. “I had acquired a pancake recipe from an old friend, a Swedish chef who worked for me in Minnesota,” says Fleming. “That was 30 years ago, and he was about 65 at the time, and he told me that he got it from his grandmother years before. So the recipe is at least 150 years old.”

The original Magnolia Pancake Haus opened in 2000 on Embassy Oaks in north San Antonio. The second location, on Huebner Road, opened in 2012 on a spacious, wooded corner not far from Six Flags Fiesta Texas. Because the restaurant closes after lunch service, he wanted to do more with the land, and an event space seemed a natural fit. In fall 2016, the Flemings opened The Halle, an airy, urban “barn” that can accommodate 300 people.
The couple’s daughter held the first wedding there, but contrary to rumors, Fleming says that’s not why he built it.

“The northwest area of town is very vibrant and growing quickly,” he says. “We saw a need for a community gathering spot. The Halle is a beautiful, traditional timber-framed structure, with lots of natural light, wrought-iron chandeliers, and a grand limestone fireplace, which is a focal point for parties and other events.”

Fleming sometimes reflects on how a pancake recipe changed the course of his life. Interestingly, he says he wasn’t a big pancake fan growing up. That old recipe from his Swedish colleague converted him.

“My wife and I travel a lot, and we eat breakfast at many different places,” he says. “I almost always get pancakes, and I may be biased, but I’ve never found one as good as ours. I’ve tried some that came close—some that are good, but none as good.”