There's more to this small town than barbecue

Written by: Veronica Meewes
Photos by: Will van Overbeek 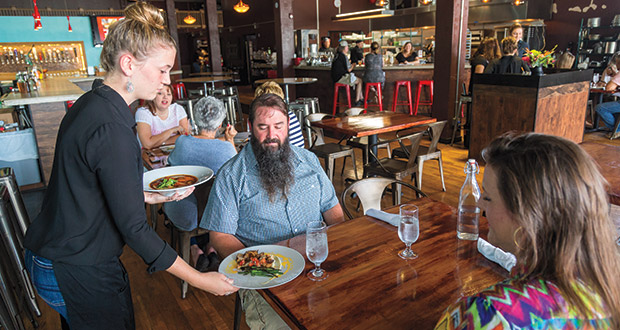 Like most Texans, my main experiences with Lockhart have always revolved around barbecue, whether that meant a birthday brisket throwdown at Kreuz Market or a pit stop for Smitty’s Market sausage on the way back from the beach. So naturally, when planning a day exploring the quickly developing town 30 miles south of Austin, I took my husband’s barbecue order before hitting the road.

For details about Lockhart restaurants, shops, events, and lodging, contact the Lockhart Chamber of Commerce and Visitors Center at 512/398-2818.

However, smoked meat was to take a backseat for the majority of this visit. After a 30-minute zip down US 183 and the SH 130, I’d arrived in Lockhart’s idyllic main square. Thanks in part to the many restored 1880s buildings, a number of movies and television shows have filmed scenes here, including Honeysuckle Rose, Red Headed Stranger, Waiting for Guffman, What’s Eating Gilbert Grape, and most recently, HBO’s The Leftovers.

Contrasted against a brilliant blue sky, brick-red and white-frosted gingerbread storefronts face Caldwell County’s 1894 courthouse, a regal three-story structure boasting a 900-pound bell and a clock that was restored in recent years by the neighboring Southwest Museum of Clocks and Watches.

“It’s about five minutes off, but I feel like that’s kind of appropriate for a town that doesn’t worry too much about time,” says Austin Burge with a smile. Last fall, Burge and his wife Taylor signed a lease for a shop space on the square and put in an application for a house around the corner on the very same day. This past spring, they opened Chaparral Coffee with their friends and business partners Johnny Musselman and Shane Renfro.

“When we moved to Austin, we were looking for a slower-paced life, but we ended up having to work more to afford the lifestyle we had become comfortable with,” explains Burge, a musician and new dad with 12 years of barista experience. “So when we moved out here to Lockhart and started this place, it was like we could take it easy a little bit. Lockhart has a slower feel to it.”

“A lot of artists are wanting to move out here because it’s so cheap,” adds Musselman. “Lockhart’s becoming more attractive because there’s a bit more of a scene here than there used to be even three years ago.”

Chaparral Coffee, with its Talavera-tiled bar front, potted plants, and veladora candles, looks like the perfectly sparse backdrop for a bohemian lifestyle photo shoot. In addition to a regular menu of coffee beverages, Chaparral makes a sweet and creamy pecan toddy, a spiced drinking chocolate, seasonal cold brews (like a recent orange zest and cardamom-infused brew blended with coconut milk), and locally sourced yaupon tea (the only naturally occurring source of caffeine in Texas). Today, a lilting, acoustic Townes Van Zandt ballad fills the space, but any given day could bring live folk or bluegrass provided by Chaparral’s large network of musician friends.

“People are also drawn out here because of the architecture,” says Burge, who recalls peeling away three layers of flooring to get to the original Bastrop pine of this former 1800s barber shop, which he sanded and stained with leftover cold-brewed coffee. “Our motto was ‘out with the old and in with the older.’”

Just a couple of doors down, a café and herbal shop called Market Street Cafe & Apothecary occupies a former bank building. The space’s original tri-color hexagonal tile still paves the floor, and the old safe, which boasts an intricate handpainted door, now acts as the restaurant’s dry storage. Across the square, Lockhart Bistro fills a capacious space that once housed a popular department store.

“This used to be the only place in town that sold Levi’s—lots of people still remember it,” says Lockhart Bistro chef and owner Parind Vora, who pared away 1950s-era stucco to reveal the building’s original limestone wall, a contrast to the rest of the renovated space, where cherry-red barstools and pendant lights pop against a cool turquoise accent wall.

In 2006, Vora moved from New Mexico to Austin, where he opened and ran restaurants for almost a decade before opening up Lockhart Bistro last fall, one of the first of nine new bars and restaurants to open on the square in less than two years. Six months earlier, hoping to escape Austin’s urban sprawl, he had relocated to 20 acres of land between Lockhart and Bastrop.

“I moved out here to get away from the traffic and expense of living in the city,” says Vora. “Ninety percent of my commute now is with cows and horses, so that definitely helps me decompress … they’re not always pulling in front of ya.”

When Vora discovered Lockhart by making a wrong turn one day, he was immediately enthralled. When he investigated the price of opening a restaurant on the square, the choice seemed like a no-brainer. Within four months, he was able to open Lockhart Bistro.

“When I moved to Austin in 2006, I was able to open up without any investors—I was the real owner,” he recalls. “And in Lockhart, you’re still able to do that, which is why we’re seeing such a renaissance. It’s a little bit of that American spirit, and that’s what’s nice—seeing people live out their dreams.”

With an expansive open kitchen and multiple walk-in refrigerators, Lockhart Bistro is capable of catering off-site events for up to 10,000 people. Vora has also reopened the fourth incarnation of his passion project, Jezebel, in an intimate dining room connected by a window to the kitchen, where he improvises the night’s menu depending on diners’ preferences. His mother’s saris drape over certain tables, which are set with silver candlesticks and handblown glass, while Astroturf gives the space a playful edge. Vora has been drawing diners from Austin, Bastrop, San Marcos, and beyond both for Jezebel’s wine-pairing experiences and for Lockhart Bistro’s diverse menu, which includes items like shrimp scampi, frog legs with green Thai curry, and a popular house-ground brisket burger. And, with two major housing developments bringing nearly 3,000 new homes to the Lockhart area in the next four years, business is on the rise.

“Lockhart is booming,” says realtor and Lockhart native Ronda Reagan. “We’re getting into bidding wars again, sort of like Austin. There’s not a lot of inventory, but if it’s priced right, it sells fast.”

The vacancies that sat latent on the square for years are now full, and there are whisperings of a brewpub, a boutique hotel, and another upscale restaurant opening in the town’s historic buildings. Reagan recently restored a space to open The Pearl, a cocktail bar featuring live music.

Located right across the street from The Pearl is Desiderata Estates, the wine bar that led the resurgence when it opened in spring of 2015, serving a vast selection of wines from across the state by the glass or bottle. A stage with a sophisticated sound system allows for live music most nights, and owner Tony Bowen is in negotiations to take over booking for Cedar Hall, one of the town’s biggest venues, located a couple of miles from the square. Lilly’s, the town’s beloved dive bar, recently relocated to a bigger space with an expanded grill menu and games like pool, foosball, and pinball. And just across the square, two more dives—Risky Business and Killin’ Time—recently opened their doors, gaining instant regulars.

“There’s definitely a newer heartbeat that’s coming out of the square and a community that’s being realized down here,” says Burge, who says that it’s not uncommon for visitors who grew up in Lockhart to stop in to Chaparral Coffee and thank them for being a part of the town’s revival.

“It’s a pretty great little town and there’s some interesting stuff going on right now,” says Bowen. “This town is on the brink of busting loose. Lockhart’s not just for barbecue anymore.”

His words echo in my head on the drive back to Austin, when I realize I completely forgot the brisket.