Frozen or rocks at the Original Ninfa's on Navigation

Written by: Jennifer Nalewicki
Photos by: Will van Overbeek

Written by Art Williams, Photographs by Will van Overbeek | From the October 2015 issue | Updated: September 16, 2015 | Filed Under: Eat + Drink 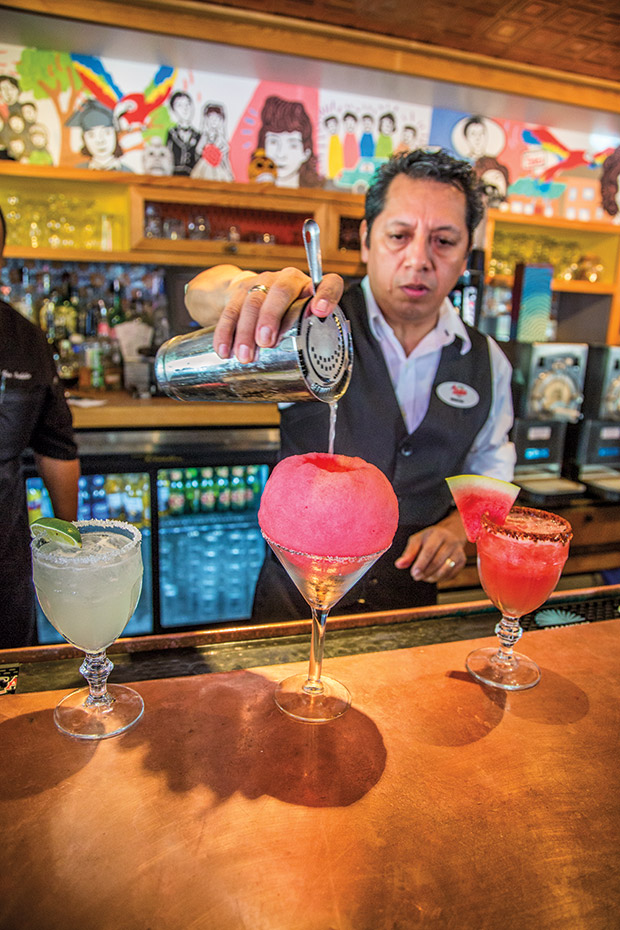 As a Tex-Mex-deprived Northeasterner, I try to get my spicy food fix as often as possible during my annual weeklong visit to see family in Texas, and there’s no place more satisfying for Tex-Mex and ice-cold margaritas than the Original Ninfa’s on Navigation.

The restaurant has been a Houston institution for more than 40 years, ever since the late Ninfa “Mama Ninfa” Rodriguez Laurenzo opened a taco stand inside her family’s tortilla factory back in 1973.

It started simply enough: To supplement the family’s income from tortilla sales, Mama Ninfa decided to start a restaurant. What started out as 10 tables in the front portion of the factory has, in the decades since, blossomed into a restaurant empire that at one point even had a location in Germany. But I’m partial to the original (now owned by Legacy Restaurants)—a low-slung stone building with a green aluminum awning whose decades-old sign still proudly proclaims “Tacos a la Ninfa.” (The other Ninfa’s restaurants throughout the state are not affiliated with the Original, by the way.)

Although Ninfa’s is probably best known for its made-from-scratch tortillas, tacos al carbon, and avocado-and-tomatillo “green sauce”—all made using Mama Ninfa’s original recipes—the margaritas are what originally drew me in. They regularly wind up on “best of” lists across the state. Making a decent margarita is actually simple—all you need is tequila, lime juice, and orange liqueur, plus a dash of simple syrup or agave nectar—but many bars and restaurants botch the recipe by swapping out fresh lime juice for concentrate, or by simply mixing tequila with bottled sweet-and-sour mix. That’s akin to microwaving a good brisket until it resembles a cinderblock. Thankfully, Ninfa’s is not one of these places. The bartenders here use fresh ingredients to make both the margaritas and the seasonal list of other cocktails, like sangrias and mojitos. Every morning, bar employees prep the bar by squeezing hundreds of limes. General Manager Betzabet Suarez, who has been working at the restaurant for eight years, estimates that the bar goes through about 7,000 limes a month.

“If you come to the restaurant when we open at 11, you can smell the fresh aroma of all of those limes, especially in the bar area,” she says. To showcase the importance of freshness, wire baskets overflowing with plump oranges, lemons, and limes sit on top of the copper-topped bar for bartenders to use as garnishes.

Suarez says that the restaurant’s most popular drink is The Navigation Margarita, made with silver tequila, Cointreau liqueur, the requisite fresh-squeezed lime juice, and agave nectar. For more adventurous imbibers, there’s also a list of flavored margaritas that change seasonally. During my visit, I tried the Tomatillo Margarita, made with silver tequila, Cointreau, house-made epazote-tomatillo-cilantro juice, and a sweet-spicy mole rim. The drink had a fresh, herbal flavor and an added depth thanks to the mole, which is made in-house. I also spied a margarita on the menu made with slow-roasted pumpkin, which sounded delicious and perfect for autumn, but I decided to save that for my next visit.

So who comes up with these creative concoctions? Suarez explained to me that the bar’s head mixologist, Ignacio Juarez, works with Executive Chef Alex Padilla to come up with the seasonal cocktail menu. This summer they created a winner with the Best of Texas Martini, which features vanilla-infused vodka, pineapples, local peaches, and ginger. Another creation that caught my attention was the Oaxacan Margarita, a smoky riff on a regular margarita. Instead of tequila, bartenders substitute smoky mezcal, then
combine it with fresh lime juice and prickly pear purée, which gives it a lovely magenta color.

“We use a lot of the same ingredients that I use here in the kitchen,” Padilla told me. “When peaches and grapefruits from Texas are in season, we use them. We have a neighbor down the street from the restaurant who has an orange tree in his yard. He doesn’t use the fruit, so he lets us pick them.” Those very same oranges often appear in the fresh-squeezed orange juice found on the restaurant’s brunch menu. Padilla and his staff also make grapefruit soda in-house, infuse tequila with cotton candy for a drink called the Margarita Mágica, and make sangria in-house on a daily basis.

“We like being different,” Padilla says. “We offer special drinks that no one else has in town.”