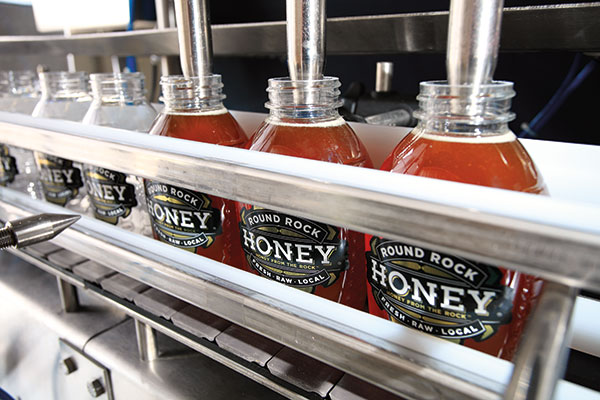 Round Rock Honey begins with honeys sourced from about 900 individual hives concentrated in Central Texas, says Konrad Bouffard, who founded Round Rock Honey in 2003 with his wife, Elizabeth.

The Bouffards use a method called biodynamic beekeeping, employing handheld smokers to calm their bees when removing honey, cinnamon to discourage ants, and olive-oil traps to suffocate beetles and other predators.

See www.roundrockhoney.com for information on beekeeping classes and to order honey online.

Straight from the hives, individual honey batches taste different from year to year—and sometimes from season to season—because of fluctuations within the bee population, the weather, and the plants that emerge. Plus, each plant’s nectar has its own flavor; some taste buttery while others seem peppery. Mesquite nectar, for example, is light and sweet, while persimmon nectar features much stronger flavors.

Round Rock’s unfiltered honey is also blended for an appealing chestnut brown color, as well as for a consistent, rich flavor with floral and citrus notes. You can find jars in grocery stores and for sale through the company’s website, which also provides information on Konrad’s beekeeping classes.