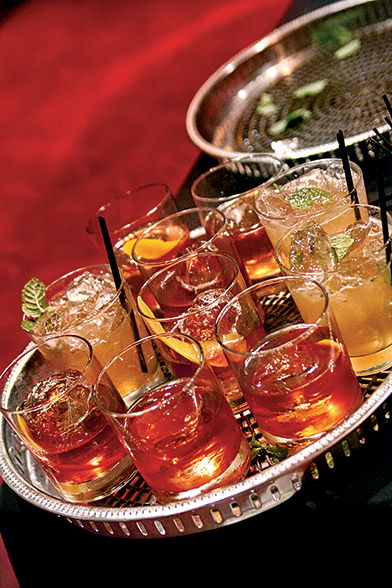 Every July, New Orleans throws an event called Tales of the Cocktail, a five-day celebration of fine drinks and the people who love them. Likewise, New York City stages the Manhattan Cocktail Classic each May; and in March, Aspen holds its annual Après Ski Cocktail Classic. It seems that from San Diego to Kansas City to Atlanta, people gather to acknowledge these heady days of craft cocktails. Texas’ big event is called the San Antonio Cocktail Conference (SACC), and this year it takes place January 16-19.

January 2014 marks the third year that SACC takes over the Alamo City’s downtown with its four-day schedule of tastings, seminars, mixology classes, and skills competitions. Classic spirits brands showcase their latest products while newer brands try to gain some of the industry’s attention. Bartenders reveal their techniques for success behind the bar. Excursions introduce guests to San Antonio’s nightlife. There are parties and there are after-parties. Indeed, SACC—organized and run by volunteers—is an intoxicating get-together for both the cocktail professional and the cocktail-curious.

“It’s a spirited group,” says Scott Becker, by way of describing SACC’s crowds. Becker is one of the conference’s organizers, as well as the general manager of Bohanan’s Prime Steaks and Seafood (a restaurant that helped pioneer San Antonio’s modern craft-bar movement), so he’s fully aware of how educated, enthusiastic, and well-traveled those in the industry tend to be. “These are the same people who go to the conferences in New Orleans and New York. I was actually nervous about it in year one.”

And, Scott admits, he was a little surprised at the first year’s attendance numbers: “We were hoping for 500 and we got 2,500.”

Now, preparing for year three, Scott expects another enthusiastic crowd to fill the banquet halls and seminar spaces of the historic Sheraton Gunter Hotel, where most of SACC’s events take place. The hotel’s early-20th-Century interior lends an appropriate ambiance to the festivities by recalling a time period that many historians call the “golden age” of the cocktail. (Right up until Prohibition, that is.)

However, since San Antonio attracts and nurtures great bar talent, and because there are many bars to visit and celebrity mixologists to meet downtown, other SACC events take place at venues in the surrounding neighborhood. It’s a chance to experience how the city’s nightlife options extend beyond the River Walk and beyond the margarita. Attendees can imbibe at swanky newcomers like the Brooklynite and Bar 1919, as well as the historic Esquire Tavern, which was reborn a few years ago as a craft cocktail bar and was subsequently nominated for a James Beard Award for “Outstanding Bar Program.”

“San Antonio was not on the map as a cocktail destination until a couple of years ago,” says Austin’s David Alan, a professional bartender and bar consultant who assisted in the Esquire’s reopening. As a charter officer in the U.S. Bartender’s Guild, David believes that having a Texas-based conference offers an important opportunity to bring together the state’s craft-cocktail innovators.

David, whose The Tipsy Texan cocktail book came out in 2013, runs his own mixology workshop at SACC and knows full-well that home bartenders can be just as passionate as the professionals.

In fact, nearly every aspect of SACC is open to the public, including hands-on tutorials for individuals who don’t know the difference between a shot glass and a jigger. Attendees can learn about drink categories (like tiki cocktails) and bartender trends (like the difference be-tween using big and little ice in cocktails), while rubbing elbows with local, national, and international spirits producers.

Some of the most well-attended classes are the numerous seminars covering the intersection of alcohol culture and history, such as Manhattan bartender Theo Lieberman’s seminar on the history of hotel bars. Hal Brock, a former bartender at Houston’s Anvil Bar & Refuge, told me, “It was utterly fascinating learning how craft cocktails evolved in the bars of great New York and European hotels.”

If nothing else, SACC is inspiring—even for those novices who are unsure whether to shake or stir their martinis. At the end of last year’s festivities, for instance, I met a couple of conference-goers, Diana Lechuga from Corpus Christi and Rose Mendoza from San Antonio, who were not connected to the industry. When I asked what brought them to SACC, Rose—with obvious enthusiasm—replied, “We’re having a girls’ weekend, and this is one of San Antonio’s new up-and-coming events.”

Diana added that she thought the interactive ‘Mixology 101’ class was “particularly excellent” for home bartenders like herself. “It opened my eyes to fruits and vegetables and other options for home bartenders. Now, we’re thinking about hosting our own ‘Mixology 101’ evening for our friends,” she told me. “And I’m definitely saving the dates for next year’s conference.”