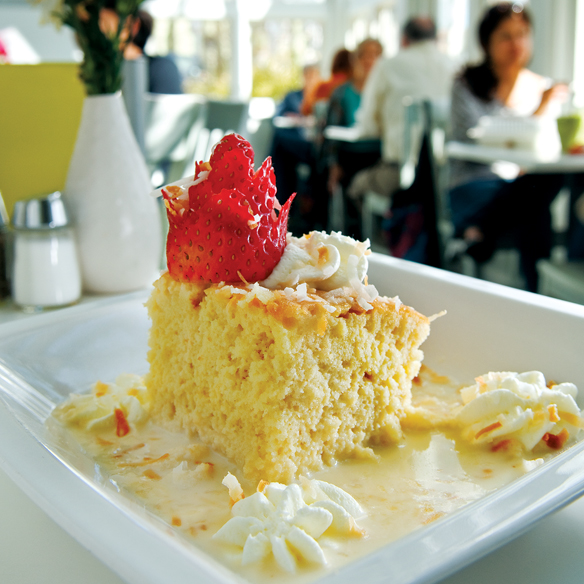 Growing up, I watched the women in my family labor over homemade tortillas every morning, and during the holiday season, they took cooking to a whole other level with the tedious process of making tamales.  So, why was it that no one in my family ever made pastel de tres leches (three milks cake), the delicate vanilla cake sopped in sweetened condensed milk, evaporated milk, and cream?

I assumed tres leches cake must really be difficult to make since the only ones we ever enjoyed were purchased. I never ventured to try, until now.

These days, I’m a lot more adventurous in my baking. One of my specialties, which I sold at a local restaurant, even earned me a “Best of Austin Critics Pick Award” from the Austin Chronicle. I feel ready to tackle tres leches.

Tres leches, usually topped with whipped cream or a light meringue, is as uncomplicated as it gets. It’s rivetingly delicious in all its simplicity, yet easily adaptable for presentation and flavor variations. I focus here, though, on the original version.

Place flour, baking powder, and salt in a large mixing bowl. Set aside. In another bowl, beat 5 egg yolks with 1 c. of sugar. Add the vanilla and milk into yolk mixture and mix together. Fold into flour mixture.
In a separate bowl, beat egg whites and ¼ c. sugar until the mixture forms peaks. Gently fold egg whites into the batter.
Pour batter into a 9”x13” buttered pan and bake for about 40 minutes at 350°, or until a toothpick comes out clean.
Allow cake to cool somewhat. Use a fork to poke holes throughout the top of the cake.
Combine evaporated milk, sweetened condensed milk, and 1/3 c. cream to create a milk syrup. Slowly pour 1 c. of the mixture over the cake to allow the cake to soak it up evenly.  Use additional milk syrup as desired to adjust cake moisture or to add to plates when serving.
Cake topping: Whip remaining cream with ¼ c. of sugar until firm. Spread evenly over the cake.

While no one can pinpoint the exact origin of tres leches, it likely originated in Latin America (Mexico, Nicaragua, Panama, Costa Rica, Cuba, and Guatemala have all claimed credit). The Nestlé Corporation included a recipe for tres leches on the labels of the evaporated and sweetened condensed milk cans sold in Mexico in the late 1800s. This dessert serves as a great counterpart to spicy Latin American foods.

The best version I’ve had comes from chef Michael Cordua’s kitchen at Américas restaurant in uptown Houston. Just the thought of it evokes an afterglow—sitting amid mesmerizing tile mosaics with my tres leches plated so stylishly. There’s a certain comfort built into that simple flavor. It’s like ice cream, minus the brain freeze, as one friend says. Américas’ cake also stands my test of texture—firm, spongy, and moist, but not soggy.

In Austin, I’ve found a delicious representation at Zocalo Café, the modern-styled taqueria billed as a “little piece of Mexico City.” The bright green and crisp white colors of this hideout offer a welcoming environment in which to enjoy the restaurant’s tres leches, an understated cake with a comforting vanilla cream flavor, topped with fresh strawberries and toasted coconut, resting in a shallow pool of the three-milk sauce.

Habana Restaurant and Bar, on Austin’s South Congress Avenue, offers Cuban and Caribbean fare, including a mouth-watering tres leches served unadorned except for a sprinkling of cinnamon. Habana serves a chocolate version, too.

With these stellar examples in mind, I set out to make my own—from scratch—and discover that my misgivings were unwarranted. Tres leches cake is actually easy to make.

I consulted sources that I thought would know tres leches best, including friends who shared family recipes. I used my judgment where there were differences and came up with an amalgamated recipe that I would follow.

Some tips: Let the baked cake cool, then slowly and evenly pour about a cup of the milk mixture over the cake—careful to make sure all of it gets covered—especially the sides. Give it a little time to absorb before spreading on the topping. If you’re not in a hurry, let it chill in the refrigerator awhile before frosting it.

And there you have it—complete with whipped topping. Tres leches cake—delicious, plain and simple—but you can top it with assorted fruits, like strawberries, mangoes, kiwis, pineapple, and others. I styled mine with strawberry and mango slices and a dusting of cinnamon.

Amaretto, rum, Irish cream, and Frangelico (or similar non-alcoholic flavorings) can add flavor to the milk mixture. I tried some of the variations with the remaining milk mixture I had, and they were all splendid, though I particularly enjoyed the sweet almond enhancement of Amaretto. You can also replace the sweetened condensed milk with cream of coconut, and top the cake with coconut flakes.

Some bakeries and restaurants offer cuatro leches (four milks) cake—a classic tres leches cake topped with the milk-based caramel sauce known as dulce de leche or cajeta. Américas incorporates several of those deviations with their dessert called Bocadito del Cielo (a little taste of heaven, it is!). This remains one of my all-time favorite desserts, a mini tres leches cake (with Bailey’s Irish cream added) filled with cajeta and served with berries.

Now you have the basics. Go forth and conquer tres leches. Buen Provecho!