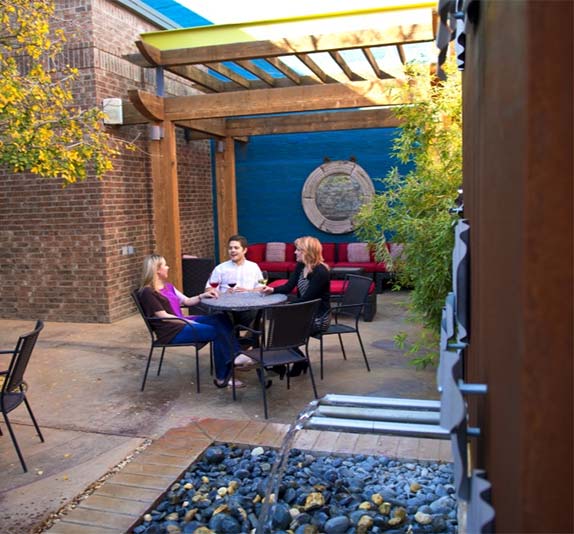 Now that the dust has settled from the 4th annual Austin Food & Wine Festival, which took place at Auditorium Shores and Republic of Texas Park in late April, I’m thinking about all the things I learned and how to apply them to my everyday life.

As in years past, when I discovered the joys of drinking vinegars, locally made charcuterie, and how to balance the four primary tastes (bitter, sweet, salty, and sour) of every dish or drink, my eyes have been opened to new culinary directions I can pursue in my own kitchen and beyond. It’s a barnburner of a good time, and in my opinion well-worth the $250 price of admission to the daytime festivities.

As a proud Texan who has watched the state’s wine industry grow in both size and reputation in recent years, Saturday’s Texas Two Sip seminar, which paired Texas wines with similar European wines in a raucous blind tasting, proved especially enlightening. Given that the festival draws attendees from throughout the United States, I wasn’t surprised to witness a fair amount of skepticism that the Texas wines would fare well—so I could barely conceal my swelling pride when they knocked the ball (cork?) out of the park. 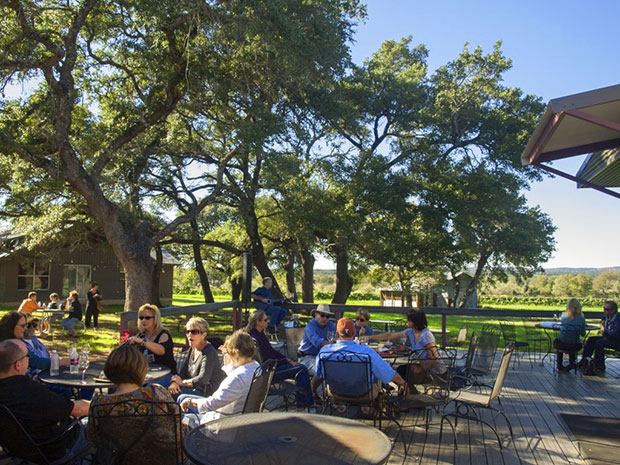 Patrons of William Chris Vineyards enjoy wine on the patio.

Chosen by a panel of Austin-based sommeliers that included Craig Collins of the fine new downtown restaurant Italic, Devon Broglie of Whole Foods, and wine writer Jessica Dupuy, the Texas wines included a bright Trebbiano from Duchman Family Winery in Driftwood, an Italian-style “Super Nero” from Brennan Vineyards in Comanche, a beautiful rosé from McPherson Cellars in Lubbock, and a lush Syrah from William Chris Vineyards in Hye. These were paired with Italian and French wines of comparable price and variety from Spain, Italy, and France, chosen by the Executive Wine Editor of FOOD & WINE magazine, Ray Isle.

After the festival, I visited with some of the major players in this fun event. I was curious to learn how they chose the wines and what some of the challenges are in the Texas wine industry, and because the next festival is a full year away but the wineries are open NOW for tours and tastings, I sought out details about the visitor experience at each participating winery.

Holding up to the Heat

“We brought in wines from producers who have consistently been releasing wines at a high quality,” Jessica told me. “I wanted to feature grapes that reflect Texas’ warm climate and compare them to grapes from other warm climates across the world. In Texas,” she continued, “we’re not so much challenged by difficult soils as we are with harsh weather conditions, such as spring hail and late spring freezes.” She explained that instead of relying on traditional Old World grapes like Chardonnay and Cabernet Sauvignon, Texas growers are experiencing success with late-budding grapes like Mourvedre and grapes with high acidity like Trebbiano and Vermentino, which hold up well in the heat and deliver refreshing wines with balance. 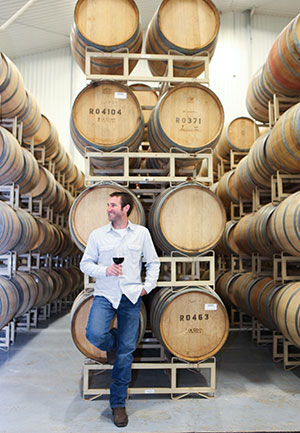 “It was interesting to sit on the sidelines and listen to the crowd discuss our wines,” confided Dave Reilly, winemaker at Duchman Family Winery in Driftwood. Duchman, like the other Texas participants, sources all of its grapes from vineyards in Texas. “The Trebbiano, along with Vermentino, is one of our flagship white wines. To me, the Treb has a slight citrus and tropical fruit note to it. It’s very drinkable and refreshing. I think we did a better job with the grape for what we were going for—refreshment. Trebbiano is a great grape for Texas because it’s late to wake up in the spring. That protects it from the late spring freezes. Trebbiano gets a bad rap, because in Italy they grow so much of it that they distill a lot of it into cognac. But we take a different approach. We coax it along and make a wonderful white wine from it.”

On Wise Planting and Millennials

“My vineyards are about 40 miles south of Lubbock, in Brownfield,” says Kim McPherson, who arguably hails from Texas’ most influential winemaking families. Kim’s father, Dr. Clinton “Doc” McPherson, co-founded Texas’ first post-Prohibition winery, Llano Estacado Winery, in 1976. “Up here the climate is a lot like the famous Ribera area of Spain. We’re at 3,500 feet above sea level, we have low humidity, and we have deep, sandy-loam soils. But statewide, the trend I’m seeing is that we’re getting smart about growing the right varieties of grapes.”

‘What we really need to do is market to millennials. There are 90 million of them. They don’t drink what their parents drink—Cabernet, Merlot, Chardonnay. They want everything oddball. You give a millennial the choice between Cabernet or Cinsault, and they’ll go right for the Cinsault.’

Kim says that some of his top grapes include Mourvedre, Tempranillo, Sangiovese, Viognier, and Roussanne. “Roussanne buds out late and is a good producer. But you have to train people to drink it,” he told me. “Here’s a good example of how we can continue to educate people about Texas wine: My Roussanne is a really nice wine, and it has won several gold medals. I was approached by Spec’s, and they wanted to sell it for $9.99 a bottle. I wouldn’t make much money on that. But I did it. They sold 70 cases of that wine in one week. And no, I didn’t make any money on it, but I got a lot of people to try Roussanne, and that’s a good thing. What we really need to do is market to millennials. There are 90 million of them. They don’t drink what their parents drink—Cabernet, Merlot, Chardonnay. They want everything oddball. You give a millennial the choice between Cabernet or Cinsault (a red wine grape from France), and they’ll go right for the Cinsault.”

Of Fruit and Dirt 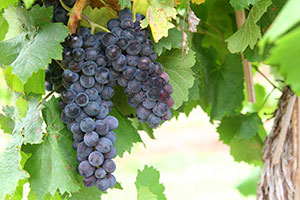 “The main issue that we deal with in Texas wine is a lack of respect,” says Brennan Vineyards owner Pat Brennan, whose winery in Comanche produces award-winning bottles by accomplished winemaker Todd Webster. “So what we try to do with events like the Texas Two Sip is to have people taste our wine blind and unbiased. When they don’t have a bias against Texas wine, they usually say they like it. The bias may have been fair in the past but it’s not now.”

“We’re one of the few growers in the U.S. to plant Nero d’Avola grapes. My wife and I had gone to Sicily a decade ago, and we knew about Nero and thought it was wonderful. We figured Sicily is hot, maybe not as hot as Texas, but hot. And it’s worked for us. When you have grapes grown in a hot climate, one of the things you have to worry about is the fairly precipitous loss of acidity as the grape matures and the sugar levels go up. In hot climates, the acid goes down too much. But growers all over told us that the Nero d’Avola grape would have a better acidity than, say grapes like Cabernet. That’s been our experience. It makes a wonderful wine. It tastes of fruit and dirt, I like to say—it has a nice minerality, and a nice flavor and aroma.”

The Coolest Friends in the World

Self-described “wine grower and forager” Chris Brundrett of William Chris Vineyards in Hye has been growing wine grapes for almost a decade. “My business partner Bill and I farm seven different properties across the Hill Country, and we also source grapes from three other properties in Fort Davis, San Angelo—where I grew up–and in Brownfield,” he told me. “It’s a challenge and a wonderful opportunity to work with our growers so closely.”

‘It’s about having the best product you can grow coupled with the ultimate guest experience. We have an open door, and we have the coolest friends in the world.’

“We are incredibly busy on Saturdays and have in fact had to start limiting our visitation on Saturday so the quality of the tour doesn’t suffer. If you come during the week, we can usually show you around. We also have a self-guided tour, which includes a viewing of the cask room and the bottling operation, but a lot of people just come out to have their photo taken by the chicken coop, to stroll around our tranquility garden, or to enjoy a glass of wine sit on the back deck and enjoy the most spectacular sunset in the Hill Country. We want to have a special place for people to come. For me, it’s about having the best product you can grow coupled with the ultimate guest experience. We have an open door, and we have the coolest friends in the world.”

The winery and tasting room at Duchman, with broad windows overlooking a pastoral Hill Country view, opens daily. For $10, you can sample a flight of six different wines from Duchman’s all-Texas offerings, and you can take a self-guided tour of the barrel room, tank fermentation area, and bottling and labeling operation. Duchman Family Wines is in Driftwood, at 13308 FM 150 West. Call 512/858-1470.

The winery and tasting room at McPherson Cellars are located in a 1920s Coca-Cola bottling plant in downtown Lubbock. Open Mon-Sat. On a free self-guided tour, you can see the entire operation. For $5, you can sample a flight of five different wines; additional wines can be purchased by the bottle or glass. McPherson Cellars is at 1615 Texas Ave. in Lubbock. Call 806/687-9463.

This tasting room, an unusual collaboration of wineries—Brennan Vineyards in Comanche, McPherson Cellars in Lubbock, and Lost Oak Winery in Burleson—is located on Texas’ most popular “wine roads,” the stretch of US 290 that flows through Johnson City and Fredericksburg. “Our wineries we don’t get the kind of traffic they get in Central Texas, so we brought our wines to them,” says winemaker Kim McPherson. Four Point Wine is at 10354 US 290 in Fredericksburg. For $12, you can taste six different wines from three different operations. Open daily. Call 866/396-6326.

The winery and tasting room of Brennan Vineyards is at 802 S. Austin St. in Comanche. Flights of six wines, as well as glasses and bottles, are available for purchase. The winery is set up for self-guided tours, with large windows overlooking the crush pad, tank room, and barrel room. The grounds themselves, surrounding the historic 1879 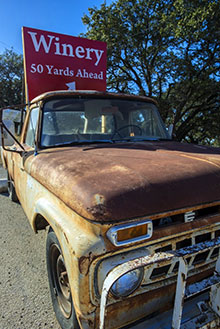 McCrary House, home to some of Comanche’s first Anglo settlers, are lush with mature landscaping. Call 325/356-9100.

The winery and tasting room for William Chris is at 10352 US 290 in Hye. Open daily. Flights of six wines, as well as glasses and bottles, are available for purchase. On a free tour of the winery, you can see the entire operation. On Saturdays, reservations are required and visitation is limited to 250 people per day; if you’d like more flexibility and space, visit during the week. Call 830/998-7654.