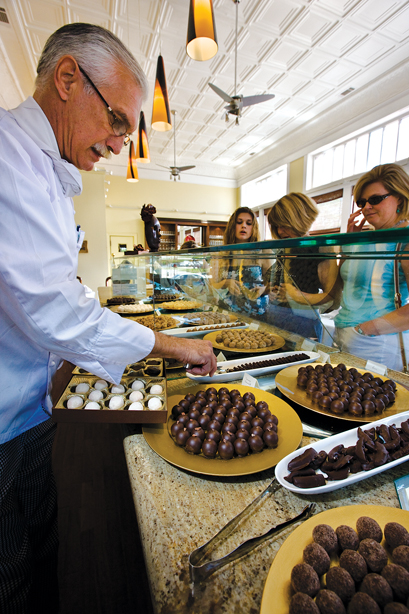 Flamboyant characters like former Brit Ken Wilkinson, who arrived in the sleepy Brazos Valley town of Calvert a few years ago to build a world-class chocolate shop, tend to start tongues wagging.

“The first time I saw Ken, waving his arms up and down Main Street, well, I didn’t know what to think,” says Calvert businesswoman Jody Powers, whose bakery, Zamykal Kolaches, opened on Main a few years ago. “He was dressed immaculately, very ‘from the city.’ I had no idea what he was planning to do.”

Nor did Wilkinson, exactly. He just knew that he wanted to open a chocolate boutique, using recipes and techniques he had learned in Europe, and that his present hometown of Houston wouldn’t support the scenario he envisioned. Real estate cost too much, for one, but he also thought that city-dwellers might be too distracted to linger and wax rhapsodic over the textural experience of an enrobed key-lime ganache or the painterly dusting of raspberry essence on a perfectly spherical truffle. He wanted to greet passersby with a “Hulluh, mates! Do you like anisette, by chance?” and invite them in for a taste and a theatrical conversation embellished with tales of cooking for royalty, kitchen alchemy in Switzerland, and culinary adventures in the Caribbean.

So when Wilkinson came across a deteriorating 1874 bank building along Main Street in Calvert, a Victorian town that boasts one of the largest historic districts in the United States, his entrepreneurial wheels started spinning. Calvert, he soon learned, enjoyed great prosperity in the 1870s as a rail link for goods headed to and from Galveston. By the 1950s, though, when the area’s cotton plantations were mechanized and work grew scarce, the town settled into a rhythm of languor. Many of Main Street’s historic buildings lay vacant. Could he be the galvanizing force in a downtown revitalization?

Wilkinson, a self-described “exacting bastard with a low tolerance for compromise” bought the building, restored it, and opened CocoaModa. He and his crew replumbed, rewired, and replaced the mortar between each brick. They repaired windows, restored the pressed-tin ceiling, painstakingly stripped and refinished woodwork, and finally, added a marble-and-glass candy case from which Wilkinson sells his handmade truffles and chocolate-covered candied fruits. When he needed more space for his cooling tables, melting machines, and other equipment, he bought and restored another two buildings across the street to house the CocoaModa factory. A viewing room here allows visitors to watch truffles roll down a conveyor belt en route to Wilkinson’s Deco-inspired candy boxes.

At the CocoaModa boutique, Wilkinson reaches into the case and extracts a single truffle from a gilded platter. It’s the color of ivory with a shimmery dusting of the palest green, and it makes me think of a bejeweled quail’s egg. “This;’ says Ken with a flourish, “is my key-lime truffle.” I take a bite, my teeth breaking through the crunchy shell and into a mildly sweet, astonishingly creamy center made from white chocolate ganache. That point where crunch turns to creamy is what chocolatiers call “snap,” Wilkinson tells me. I try other confections, too-an earthy (and still snappy) truffle of espresso and dark chocolate; a truffle with a subtle kiss of orange and a decorative glimmer of 14-carat gold; a spicy sliver of ginger enrobed in more dark chocolate; and finally, a complex, bittersweet marriage of dark chocolate to dark chocolate that sends endorphins zinging.

Chocolate-fueled and wide-eyed, I’m glad that CocoaModa has a bistro with a menu that promises to bring me back to earth. “I’m not interested in sauces or herbs or wines that mask the flavor of quality ingredients,” Wilkinson says, bopping the tablecloth with his fist for emphasis. “I want to enhance the flavor of the food, not overpower the flavor of the food!” he says. Wilkinson’s influences, primarily French comfort food, reveal themselves in such dishes as a salty-crispy-creamy croque monsieur, a delicate tomato-and-orange soup called potage jonelle, and a classic French cassoulet, the latter a stunning stew of savory pork sausage and white beans topped with a buttery crust of breadcrumbs and Parmesan.

Groups of tourists from College Station and Houston come in while I’m dining, and Wilkinson drains his coffee cup and breaks away to hold court—”Would you like to try a blackberry truffle? How are you enjoying your time here in Calvert? Have you seen the beautiful homes to the east of us?”

I can’t help but smile.

“I see people all the time walking around with their little CocoaModa bags,” says Jody Powers. “And it’s such a delight. Have I seen my own business pick up? Absolutely. Ken and I both came to town with the idea that Calvert will be back on the map once people start restoring these buildings and attracting visitors again. Won’t Calvert be something then?”