TH Taste: I Fell in Love with a Mexican Plate

…out in the West Texas town of El Paso 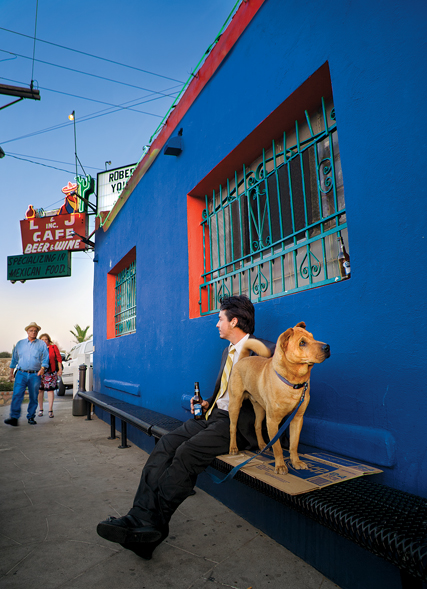 As the writer and producer of McDonald Observatory’s daily StarDate radio program, I visited El Paso nearly 20 years ago to discuss producing a Spanish-language version of the show. Arturo Vasquez and Ignacio “Nacho” Acosta, the founders of the station with whom I was considering working, took me to lunch at one of their favorite Tex-Mex cafés, a no-frills spot called the L&J Cafe.

Over green chile-studded enchiladas and homemade tortillas still steaming from the griddle, we set the show in motion, and I set a personal goal as well: to eat at every Mexican-food restaurant in El Paso.

I’ve visited El Paso close to a hundred times since then, and I still have a long way to go to reach that goal. In part, it’s because El Paso is blessed with a seemingly endless supply of Mexican restaurants. But it’s also because I can’t pass up my handful of favorites.

Take L&J, for example. Bright blue on the outside, cool and dark on the inside, L&J sits across North Stevens Street from Concordia Cemetery, where gunfighter John Wesley Hardin is buried.

On a recent lunchtime visit, I tried the meat taco plate—which passed my personal litmus test (delicious, affordable, interesting, and plentiful) with flying colors. The taco shells are made from white-corn tortillas fried in-house so that the tortillas are crisp on the outside but still chewy on the inside, a play of textures that works well with the hearty filling of peppery ground beef and potato chunks. Topped with spicy red salsa and accompanied by creamy, rich refried beans, this deceivingly simple plate helps explain the crowds of locals and visitors who pack the place at lunchtime.

Also on my favorites list is the Little Diner, a restaurant once lauded by Gourmet magazine, which is tucked next to a laundromat in a residential neighborhood of Canutillo, a community in El Paso’s northwest corner.

Local ingredients are one of the keys to El Paso’s Mexican food.

Little Diner offers some of the spiciest salsa in town; you can practically see the heat waves from the locally grown chiles shimmering above the bowl.

In fact, says owner Lourdes Pearson, local ingredients are one of the keys to El Paso’s Mexican food. “Green and red chiles, lettuce, onions, even corn for the tortillas—they’re all grown right here, so what we have is what we fix.”

Little Diner’s gorditas—stuffed pockets of fried dough whose soft-yet-crunchy texture resembles a southern-style corncake—are made of corn from nearby Anthony, which is stone-ground at the restaurant and mixed with red chile sauce to add a bit of heat and color. The pocket is filled with beef seasoned with black pepper and local chiles, topped with lettuce, tomatoes, and yellow cheese. The crispy exterior, spicy filling, cool vegetables, and addictive salsa combine to produce one of my favorite El Paso treats.

As I enjoyed my meal one evening, with the sun painting fiery patterns on the Franklin Mountains, I realized that color is an important ingredient in El Paso-style Mexican food. In fact, one of the most important decisions diners must make is between red or green salsas—the former typically a smooth, aromatic sauce made from ground red chiles, the latter slightly chunky and tangy, thanks to several varieties of green chiles.

I opted for the red sauce at lunch the next day at La Malinche on North Yarbrough Street, one of six restaurants in the local chain. My lunch special (selected from a menu of six choices) included chips and salsa, soup, two tacos, two cheese enchiladas, rice, beans, and iced tea—all for $6.95.

The place was still busy when I showed up around 1:30, but the wait staff was friendly and efficient, and I was soon digging into a bowl of caldo de res, a popular Mexican soup made with chunks of beef shank along with cabbage, celery, carrots, onions, and sections of corn-on-the-cob. The clear broth was hearty and flavorful, the slightly crunchy vegetables added body, and the beef was rich and fork-tender.

The freshly made corn tortillas provided an earthy-sweet flavor that complemented the spices in the enchiladas and tacos. The red chile sauce on the enchiladas, which were filled with white cheese, offered a complex flavor with a slightly sweet undertone. And the tacos, made with ground beef seasoned with more peppers, were prepared like those at L&J, with the crispy-chewy shell fried in-house.

The profusion of restaurants like La Malinche that offer great and plentiful food at low prices is one of my favorite things about El Paso. I grew up thinking that inexpensive Tex-Mex was a basic human right, but restaurants that share my philosophy are difficult to come by in some other Texas cities these days.

So as I headed to the airport on my way out of town, I had to stop for one more round, at Good Coffee on Montana Avenue. My chorizo con huevos—spicy Mexican sausage scrambled with eggs—was delicious, with a bit of heat and almost no grease. The freshly prepared hash browns, refried beans, a jumbo flour tortilla (so fresh off the griddle that it was almost too hot to handle), and a chunky tomato-and-onion-based salsa completed an excellent send-off. And at $4.25, it was priced to lure me back the next time a business meeting—or anything else, for that matter—brings me to El Paso.