The Beer from Out Here 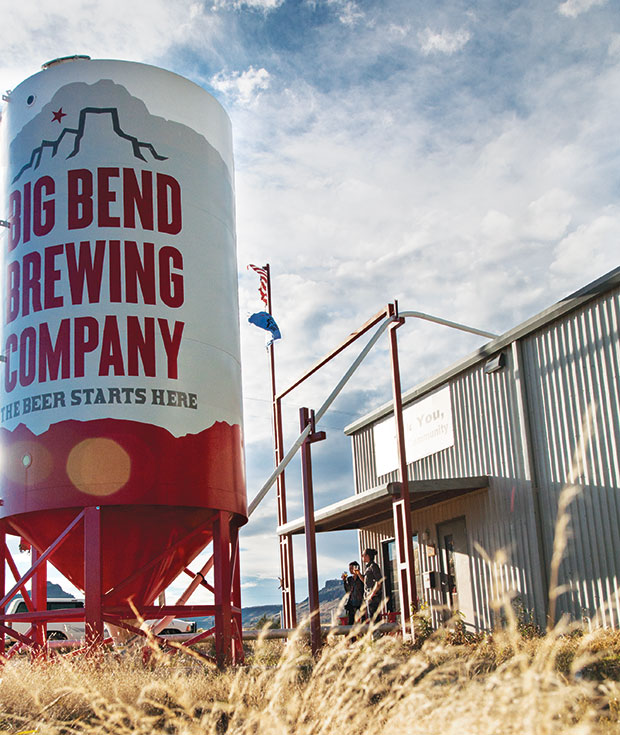 Although craft beer-making has flourished in Texas for decades now, the Big Bend region has been slow to benefit, only recently welcoming the arrival of a sustainable local brewery.

Be Mine in Valentine

On February 14 from 3-10 p.m., join fellow Big Bend enthusiasts for Big Bend Brewing Company’s 3rd annual Valentine’s Day in Valentine. The event takes place in and around the Old Mercantile, the historic dry goods store in the heart of Valentine.
Doors open at 3 p.m. and musical guests this year include the Joe Ely Band, Tessy Lou & the Shotgun Stars, Crooks, and Mike and the Moonpies. The brewery provides free shuttle service back and forth between Valentine and Fort Davis, Alpine, Van Horn, and Marfa during the event.

Tell us what you LOVE about Texas and you could win a brewery tour and tickets to the party.

The Big Bend Brewing Company, located in Alpine, completed brewing its first beers in December 2012, providing the region’s pubs from Marfa to Marathon with locally produced beer on tap. Six-packs soon followed, and these days the brewery’s creations are found in commercial chillers across the Big Bend.

Beer and the art of beer-making have existed for many centuries, but until the onset of the Industrial Revolution, beer production usually took place at home or at small, locally operated breweries, essentially creating hundreds of craft beers throughout each region. The
introduction of mass production consolidated the beer-making process (and Americans’ tastes), leaving enthusiasts few options by the middle of the 1900s. Thankfully, the country has experienced a renaissance in artisanal beers over the past few decades, due in part to a renewed enthusiasm for locally produced food and drink in general.

“We wanted to create a brewery that made world-class beer and proudly represent the region and far West Texas with a great product,” says Big Bend Brewing Company owner Matt Kruger. “I just thought that the area was so amazing and cool, and that if we made great beer, the rest of Texas and beyond would probably buy it.” Kruger soon found out he was right, and to meet the escalating demand, completed a significant expansion to his brewing facilities in 2014.

Kruger makes a great pitch on behalf of his brews, but the beer really speaks for itself thanks to Steve Anderson, Kruger’s resident brewmas-ter. Anderson brings a little science, a touch of culinary creativity, and a lot of artistic sensibility to the beer-making process, creating five different
beers that represent a variety of styles.

“We are brewing beers that are compatible with the West Texas desert heat and dryness,” explains Anderson. “The Terlingua Gold is a light-bodied, dry, and hoppy golden ale that quickly quenches the thirst. Our Big Bend Hefeweizen is a true Bavarian-style wheat ale that has a very thirst-quenching quality with its fruity and spicy character—perfect for a hot summer day. And our No. 22 Porter, on the other hand, is ideal for the bitterly cold winter nights we get here for more months than I like.” Anderson also produces an IPA called La Frontera and the brewery’s very drinkable signature lager, Tejas, which shows up in my ice chest on a regular basis. But don’t just take my word for it. Try it yourself during a tasting tour of the brewery’s facilities.

The brewery opens to the public for tours and tastings Wednesday through Saturday. During the tour, a staff member will take you through the entire brewing process while you enjoy a sample of the latest brew. With several massive fermentation tanks in the background, we learned about the brewery’s use of hops and malts, then checked out the canning area.

“Canning is an all-hands-on-deck operation,” brewery tour guide Amy Oxenham explains. “The canning line overflows with beer when running, and every run is taste-tested on the spot,” she adds. Amy tells us that the brewery uses cans rather than bottles, as cans chill faster, take up less space, weigh less (thus creating a lighter carbon footprint during transport), and protect the beer from light.

After the tour, you can socialize with fellow tourists in the tasting area over a round of lagers or ales and take in the West Texas ambiance. Rather than enhancing its tasting room with memorabilia (caps and other items are available in the lobby), the brewery showcases its inspirations instead, raising its shipping dock doors to fill the brewery with the light and landscape of the Big Bend.