Say hello to Hye, the tiny Texas town on the 290 Wine Trail

Written by: Jane Kellogg Murray
Photos by: Will van Overbeek 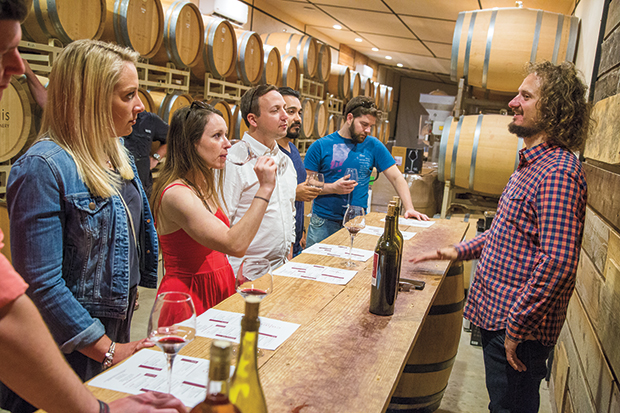 Ben Calais (pictured) built his boutique wine cellar into a hill – stopping only when he hit limestone about 11 feet underground.

Does an oenophile’s paradise exist in Texas? While some wine-lovers may pine for the Provences and Willamette Valleys of the world, for me, it’s the hamlet of Hye.

This no-stoplight town pops up on the map about an hour west of Austin, halfway between Johnson City and Fredericksburg. Locals have had their fun with the name—for awhile, “Hye, bye” became the unofficial greeting as tourists passed through, most on their way to the cluster of wineries in picturesque Fredericksburg. Hye is named for Hiram “Hye” Brown, who established the first store here in 1880; a post office came in 1886 (President Johnson mailed his first letter there at age four), but until recently, there really wasn’t much else to see.

And then on one of our regular weekend wine excursions to Fredericksburg, my husband and I decide to make an early detour. We’d heard murmurings about Calais, a boutique winery in Hye that was worthy of a pit stop, so we call ahead to reserve a spot at the tasting counter. Driving up, I wonder if we perhaps typed in the wrong address. Google Maps says we’re there, yet we can’t find a sign. “Oh wait, is … is that a sign?” I ask my husband from the passenger’s seat. “Yes, that must be the sign; turn around!”

Gravel crunches beneath our tires as we make the turn around the bend of Calais’ driveway. We land at what could easily be mistaken for a doomsday prepper’s underground bunker if it weren’t for a beautiful reclaimed wood entrance. The owner, French expat Ben Calais, greets us at the bottom of the ramp and guides us inside the chilly, 62-degree wine cave, which smells of rich oak and fresh bread he baked earlier that morning.
“This is how we build wineries in France,” he explains without my asking. “My electric bill for August last year was $37.” Surrounded by more than 100 stacked barrels of wine, he leads us through a tasting of his current releases, mostly Bordeaux varietals such as the 2015 Cuvée de Cantegral—a cabernet Franc grown in the Texas High Plains.

Calais speaks more like a winemaker than a businessman, with deep pride in how his grapes are grown entirely in Texas. “I believe that a wine has a sense of place, and when you start mixing 25 percent California wines in all your [Texas] wines, you lose it,” he declares. Calais enjoys experimenting, so much so that in April he unveiled a rum distillery just three miles down the road: Hye Rum (the wordplay on Hiram was unintentional, he says). I make a mental note to check out the distillery on a return trip.

I’d heard about Calais through the grapevine, so to speak: During a tasting earlier this year at Spicewood Vineyards, owner Ron Yates encouraged me to explore the wine evolution happening in this tiny Texas town. He’s betting on Hye’s success: Earlier this year Yates unveiled his eponymous 6,000-square-foot winery—a stone’s throw from Calais’ cellar—and is already expanding with a 6,000-square-foot tasting pavilion. One day, Yates says they’ll add rentable cabanas and a swimming pool to compete for the bachelorette party crowds. But for now, his new winery remains a quiet respite just off the busy highway, with plenty of acreage to grow his favorite grape, tempranillo.

The wine spark in Hye can be traced back to Chris Brundrett, who started William Chris Vineyards in 2008 with viticulture industry veteran Bill Blackmon. They opened their tasting room in 2010. We head to his winery next. It’s just three minutes away unless you stop for gourmet sandwiches across the street at Hye Market Restaurant & Tasting Room, housed in the historic post office, which you should.

Today William Chris’ wine club boasts more than 3,000 members—impressive considering the town’s population is 105, give or take a few. (“The sign hasn’t changed since I’ve had both my kids,” Brundrett points out.)

Visitors are drawn to wineries like this one for its relaxed atmosphere, but don’t mistake the laid-back attitude for a lack of passion—Brundrett is eager to share his love for farming grapes in Texas’ fickle soil. “Wine is all about where it’s grown,” he says. “The joy, for me, is tasting different wines and knowing what these different areas of Texas and the world taste like.”

You can take a tour of Texas through William Chris’ wine list alone, which features grapes grown entirely in Texas, including petit verdot, mourvèdre, and trebbiano Toscano. As he pours his signature wine, the 2011 Enchanté—a blend of cabernet, merlot, and malbec made from grapes grown at Granite Hill Vineyards in Willow City—he waxes poetic about the diverse geology that produced its complex character, pointing to the vein of decomposed granite that runs across the state, the result of volcanic eruptions in Texas more than a billion years ago. “This is what 25 minutes from here tastes like,” he says proudly.

Like Calais and Yates, Brundrett is experimenting with his growers, planting varietals he thinks are well-suited to Texas’ extreme climates, in an attempt to define the true grape of Texas—a question that can generate five different answers from five different winemakers. He’s also making fortified wines, like a roussanne aged 18 months in neutral barrels and fortified with brandy.

It’s easy for me to understand why people are quickly falling in love with Hye, an old town so new to the tourism industry that it doesn’t yet have a proper hotel. Our morning pit stop in Hye has expanded into a full day, so Brundrett directs us to his neighbors across the highway, Compass Rose Cellars, which last year built three modern casitas for wine-weary travelers. “I can’t tell you how many people have told me, ‘We’ve been trying to get out of Hye all day, but we just can’t.’”

As we navigate our way down the well-worn road toward Compass Rose, our last stop of the day, we’re met with a traffic jam: A pair of burros have somehow found their way to freedom on US 290. We watch as a few friendly drivers pull over and quickly corral the donkeys to safety. It’s not an uncommon sight, says Compass Rose owner Mark Watson: Just two days earlier, his electric fence malfunctioned—he found out when he got a call from the sheriff’s department saying three of his cows were wandering down the road outside of Garrison Brothers whiskey distillery.

As we arrive at Compass Rose and stroll onto the terrace overlooking the Pedernales River valley, a rockabilly band strikes up a rhythm as about a hundred people settle in to enjoy one of the best sunset views in town. For this city gal, it’s the perfect example of the Texas life I was hoping to taste today. Watson holds up his glass to me and signals a cheer: “We’re living the Hye life, my friend.”