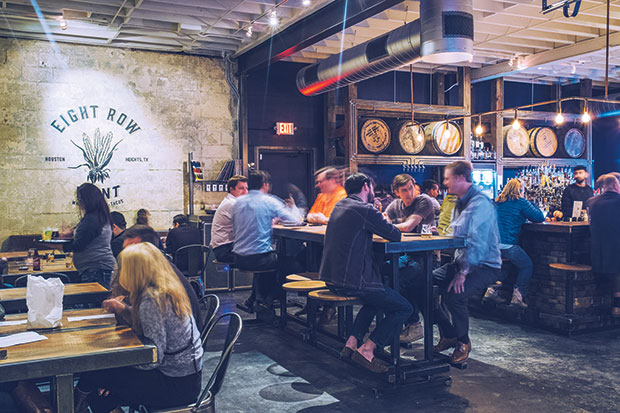 It’s a Sunday afternoon, and the rows of picnic tables are quickly filling up outside at Houston’s West Alabama Ice House. Inside, regulars settle into prized spots on cushioned swiveling stools while a bartender in a red Houston Texans T-shirt pops open beer bottles and juggles conversations with ease and a sunny smile.

In the backyard, kids play basketball while groups of friends retreat to wooden corner benches, where they sip Lone Star and someone picks up a guitar for some bluesy guitar riffs.

“We’ve got over 80 years of beer drinking in this neighborhood,” says owner Pete Markantonis matter-of-factly. Built in 1928, the icehouse has been in his family since 1985, when his dad Jerry, a longtime bar-owner in the downtown area, looked to the Montrose neighborhood for his next venture.

“When we got here, this area had abandoned houses and businesses, and groups of homeless people walking down the street,” remembers Markantonis. “So it’s gone through a lot of changes since I started working here when I was 18. Imagine what it was like in the early days. West Alabama Street was a dirt road, and this was a country store and gas station on the edge of town. And now it’s in the middle of the city.”

When Texas’ first ice-manufacturing plants coincided with the arrival of the railroad in the late 1800s, the state’s fruit, produce, and meat industries suddenly had a way to transport their products long distances without risk of spoilage. Before too long, these “icehouses” began to sell blocks of ice to consumers, too, who could now keep perishables like milk, eggs, and produce fresh in their homes. By the early 1900s, there were icehouses in nearly every Texas city—and most also sold beer and soft drinks.

“People didn’t have A/C, so you couldn’t hang out in your house— it was too hot,” says Markantonis. “So you either hung out in your yard or you went down to the icehouse and hung out with everyone else. So an icehouse was a daytime gathering place where the neighborhood would get together—and it still is!”

Eventually, as automobiles became widespread in the 1950s, most icehouses in Texas had turned into drive-ins, and many sold gasoline, as well. (In the 1980s, in fact, the sign for West Alabama Ice House actually read “West Alabama Drive-in,” but the Markantonises changed it back to “Ice House.”)

“People would basically drink beer sitting in their cars, listening to the radio,” says Markantonis. “I have heard stories that the gas pump was here until the 1970s but they weren’t using it
anymore, and that someone eventually backed into it. Since then, it’s just been a beer joint.”

When the Markantonis family took over the property in the 1980s, there were still a number of icehouses operating throughout the city, but, one by one, they began to shut down.

The few icehouses that still stand remain important neighborhood institutions. Nearby in The Heights, Jimmy’s Ice House has been serving longnecks straight from Igloo coolers since 1948—and the music hasn’t changed much either. Sheffield’s Ice House, a 1940s-era open-air hangout due southeast, regularly hosts live music and competitive chili cook-offs.

In recent years, a new wave of bar owners and restaurateurs have started paying homage to Houston’s icehouse culture with inspired concepts. Three years ago, a classic icehouse named D&T Drive Inn was revived; in its new incarnation, the D&T features 50 beers on tap, board games, yard games, and a “Buy Your Bud a Beer” chalkboard where friends can leave each other drink credits. The D&T features regular steak nights and burger nights where Chef Jason Kerr mans the patio grill for a crowd consisting mainly of Heights regulars.

“As big as Houston is, you have to identify yourself somehow, and being linked closely with a Neighborhood is a way to do that,” says Chef Ryan Pera, who’s part of the team behind Houston’s Revival Market (a craft butcher shop and café) and the Italian restaurant Coltivare. “So I think an icehouse in a neighborhood is going to be well-supported, because it does feel so local.”

Pera, along with his partner Morgan Weber, opened Eight Row Flint in a former Citgo gas station in The Heights this past winter. Named for an heirloom variety of corn used to make whiskey in the colonies (and cultivated by Native Americans hundreds of years ago), Eight Row Flint could pass for a classic Texas icehouse, with its expansive patio, white patio tables, bench seating, and George Strait playing just loudly enough. But behind those garage doors, you’ll find no ordinary bar, with a sophisticated whiskey menu and some of the most complex frozen drinks, carbonated cocktails, and other inventive libations in town. 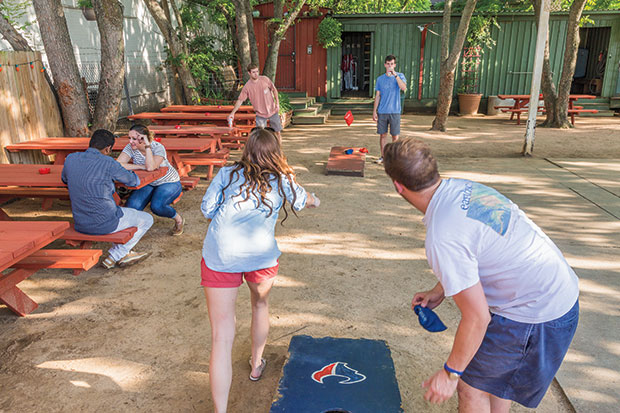 “Morgan has been in love with bourbon for as long as I’ve known him,” says Pera. At Eight Row Flint, six American Oak bourbon barrels are hooked up to a labyrinthine custom-tapping system, which allows the whiskey to age until the moment it’s siphoned into a glass. Another interesting twist: Weber and Pera pay homage to their name via a mobile taqueria in the parking lot, where they use handcrafted tortillas made from an heirloom variety of organic corn. The tacos served here—like the grilled fish tacos with a fragrant slaw made with jicama, fennel, and orange; or the juicy carne asada piled with scallions and pickled peppers—are nothing short of exquisite.

“Certainly, we are not a traditional icehouse—there’s no doubt about it—but everything has to change, all the time, or we’re in big trouble,” says Pera.

Even West Alabama Ice House continues to adapt to the times. Horseshoe pits and washers have been replaced with ping-pong tables. A basketball court occupies the former shuffleboard court, and a dry-erase board can barely contain the joint’s lengthy beer list, which now includes selections from such local breweries as Karbach, Buffalo Bayou, 8th Wonder, and 11 Below. Most of the former parking lot has been replaced with an extended patio filled with hand-built picnic tables.

Don Hardy, an 80-year-old local perched at the inside bar with a friend, says he has been coming to West Alabama since long before the Markantonis family bought it, and that the steadily increasing (and younger) clientele is the most obvious change to his favorite hangout.

“A crowd like this? Unheard of!” he says. “When I first started coming here, everyone was local and had been here a long time. Now, it’s completely different. Houston has outgrown all the redneck people that were here, you know? There are a lot more people here who don’t know what we went through.” He takes a sip from his Miller Lite, which is kept cool by a camo koozie. “But I don’t hold that against them,” he says with a smile.