Brewing in the Hills 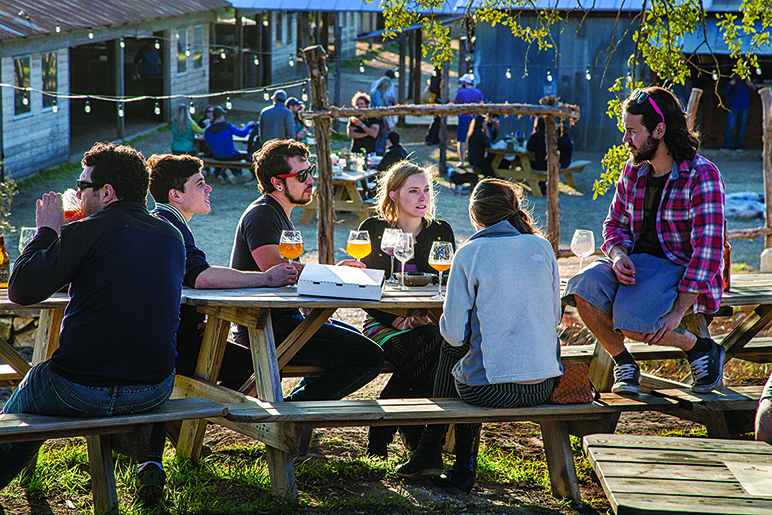 It is a sunny and crisp Austin day, perfect for showing our visiting family some of our area’s attractions. We wanted to venture off the beaten path, and since both of my brothers-in-law are craft-beer enthusiasts, my husband and I chose to showcase the city’s growing craft brewing industry by heading to Jester King Brewery. Approximately 18 miles southwest of downtown Austin on a 200-acre ranch, Jester King produces beers unlike any others in the area.

We feel like we’re heading to the middle of nowhere as we drive up winding, narrow Fitzhugh Road, flanked by fields of oak and cedar trees. Then we spy the handpainted sign directing us to turn left. After parking beneath a grove of oak trees, we head up the crushed limestone path toward the tasting room and brewery. The smell of a bonfire at the adjacent Stanley’s Farmhouse Pizza—located on the same property—promises warmth and camaraderie. At the brewery’s entrance, a friendly Jester King employee in a plaid flannel shirt hands us current menus and explains the lay of the land: We can purchase beer in the tasting room, or at the blue tent on the opposite side; a free tour starts within the hour, so we need to listen for announcements.

Amidst the oak trees and limestone outcroppings, couples of varying ages, groups of friends, and family groups gather at picnic tables—chatting, tasting, sharing pizzas, and enjoying a day in the Hill Country. Some people play lawn games like cornhole and horseshoes, while others take their beer study seriously, poring over glasses of different shapes and sizes and comparing tasting notes.

We find a table under an old oak on the edge of the hill, overlooking the lively scene at the pizzeria below. After a visit to the tasting room (four-ounce pours cost $2-$4.50, depending on style), we return to our table with an array of beers to sample. Jester King’s beers might surprise aficionados who prefer traditional lagers, as here the brewers make mostly dry, sour styles (one of the latest beer trends), using hops judiciously to impart bitterness and interesting floral notes. Jester King’s tried-and-true standards are available year-round at the brewery and in local stores, but at the brewery itself, I recommend sampling the limited releases, which are experimental styles brewed in small batches and not available anywhere else. 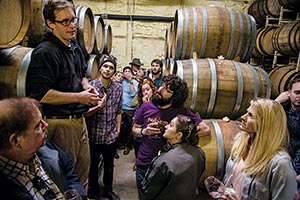 On this occasion, I especially enjoy Jester King’s popular Wytchmaker Farmhouse IPA, from a batch that had been conditioned with fresh guava juice. I also love the Atrial Rubicite, a barrel-aged sour beer re-fermented with fresh raspberries, which boasts a beautiful ruby color and a dry finish of fresh raspberries. Because of their lighter body and tangy flavors, they are ideal for pairing with food, and Stanley’s
pizzas—some of the best wood-fired oven pies in the Austin area—are the perfect foil. Two of our favorites are the Penelope, made with red sauce, smoked speck, fresh mozzarella, arugula, tomatoes, cracked salt and pepper, and extra-virgin olive oil; and the Willie, a spicy pie with barbecue sauce, juicy brisket, cheddar cheese, red onions, and fresh jalapeños.

As we sip and discuss the beers we’re sharing, we hear the announcement that it’s time to line up for a tour with co-owner Ron Extract. With my glass of RU55 sour barrel-aged red ale in hand, I follow the group into the fermentation room where Ron, standing on top of a keg, tells us the story behind this one-of-a-kind place. Inspired by small farmhouse breweries in France and Belgium, Ron and his business partners, Jeffrey Stuffings and Michael Steffing, devised Jester King’s largely experimental approach to produce artisan ales with a true sense of place. They draw water from the Trinity Aquifer with an onsite well, use as many organic ingredients as possible, and ferment with naturally occurring wild yeasts. Rather than making seasonal beers, the offerings are weather-driven. The brewers allow the fermentation to progress until the beer is “at the right point of doneness,” then they allow it to mature naturally—often in oak barrels recycled from Hill Country wineries—prior to re-fermentation in the bottle, cask, or keg. No batch tastes exactly like the last, and once a certain batch is gone, it’s gone.

Jester King Brewery’s motto, which graces every bottle, defines the business well: “We brew what we like, drink what we want, and offer the rest to those who share our tastes.” But Ron adds an unwritten addendum. “It’s good that not everyone shares our taste,” he says, “because we can’t make that much beer!”