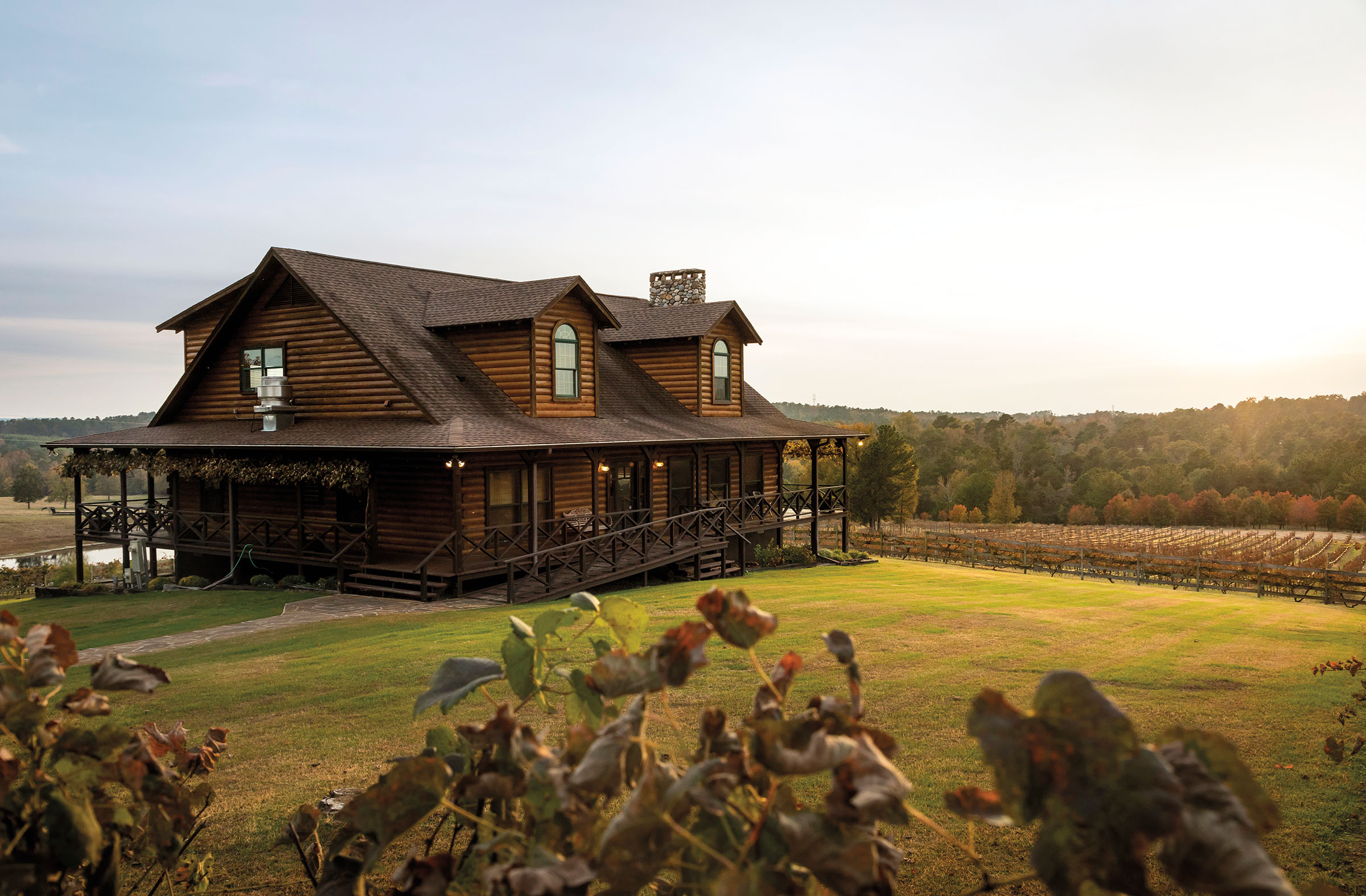 At Kiepersol Vineyards & Winery, south of Tyler, a resident flock of guinea hens provides the soundtrack for an afternoon of wine tasting. Their squawks, which sound like something between fingernails-on-a-blackboard and a chainsaw, might surprise unwitting guests. Yet these South African birds are the vineyard’s first line of defense against agricultural pests—and just one sign that East Texas winemakers do things a little differently.

For a map and details about the wineries and vineyards on the Piney Woods Wine Trail, see pineywoodswinetrail.com.

Texas now has more than 500 wineries, mostly in the Hill Country and High Plains regions but also in far-flung corners of the state. The most popular region for wine tourism in Texas is the Hill Country, especially along US 290 between Johnson City and Fredericksburg. This stretch is so popular that wineries from Lubbock, Comanche, and Bryan have set up tasting rooms there to reach customers. Last year, Los Pinos Ranch Vineyards in Pittsburg, a town of fewer than 5,000 residents between Dallas and Texarkana, opened a US 290 tasting room in a shared space with San Saba’s Wedding Oak Winery. Some visitors expressed surprise that East Texas wineries existed at all.

In fact, there are more than 20 wineries and vineyards along the self-guided Piney Woods Wine Trail—three of which are spotlighted here. They offer tours, tastings, and dining, with hearty doses of innovation.

In 1984, the late Pierre de Wet, a farmer by trade, immigrated to the United States with his two young daughters, Marnelle and Velmay. Initially, he harvested rice in California but eventually moved to the Tyler area to work in a rose nursery. When his daughters were in high school, the de Wets began planting Kiepersol’s first grapevines amid rolling hills and pines that reminded them of their home in Kiepersol, South Africa. These days, under the stewardship of Marnelle Durrett and Velmay Power, Kiepersol makes 14 varietals from grapes grown on 63 acres surrounding the site. The winery also operates a 15-room bed-and-breakfast, restaurant, distillery, demonstration kitchen for cooking classes, and tasting room overlooking rows of sangiovese, cabernet sauvignon, merlot, and syrah vines. This was no easy feat, as East Texas’ rainfall and humidity mean that these traditional grapevines, known as vitis vinifera, often fall victim to an insect-borne bacterial blight called Pierce’s disease. “When Pierre first planted these grapes in the late 1990s, a lot of people told him it was impossible to grow vitis vinifera grapes in East Texas,” Kiepersol winemaker Alex Lee says. “But Pierre saw the benefits of the slope and the good drainage, and he understood the importance of the right timing for picking. He said, ‘Watch me do it.’” Since 2003, all wines here have been made with 100-percent estate-grown grapes.

Kiepersol opened a distillery to craft vodka from grapes in 2012 and followed that with rum and bourbon made from Texas molasses and corn. But winemaking remains the heart and soul of the business. “East Texas has a reputation for being a region where people like sweet wines,” Lee says. “And while sweet wines are strong sellers for us, our top three—merlot, cabernet sauvignon, and syrah—are dry. I like to say our style is ‘comfort wine.’ They’re not aggressive or overly tannic. Texas grapes tend to taste of bright, juicy fruit, and that’s the style I like myself.”

After a tour of the operation, most guests linger in the sunny tasting room to sample flights, including a taste of Kiepersol’s ruby port-style wines, crisp rosés, or one of the best-selling merlots. “Our merlot is a lot lighter in color and body than you might be used to,” Lee says. “That is what the vineyard brings, and we want to tell a story of the place. We want people to come out here and have a wine that speaks of Texas.” 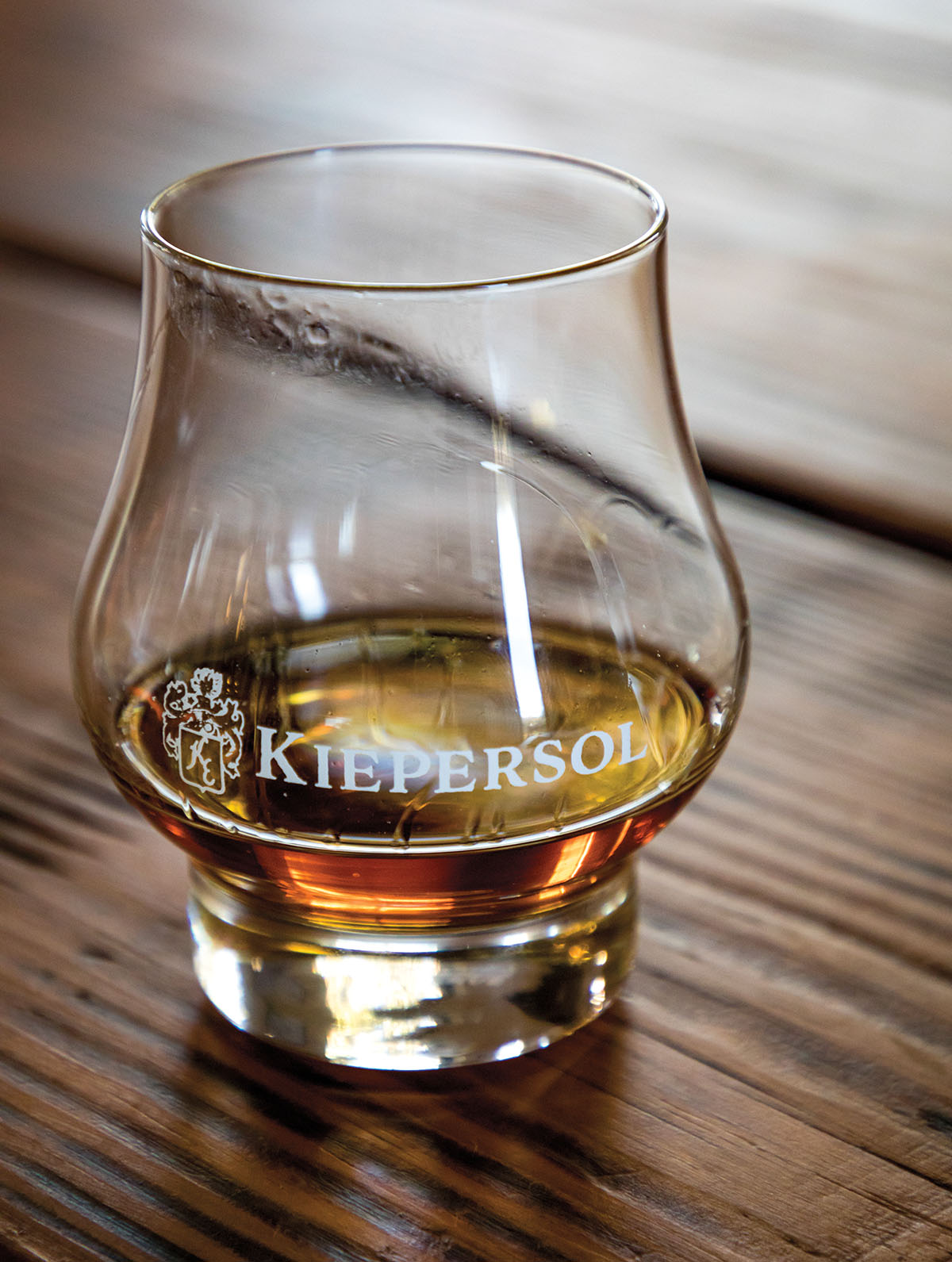 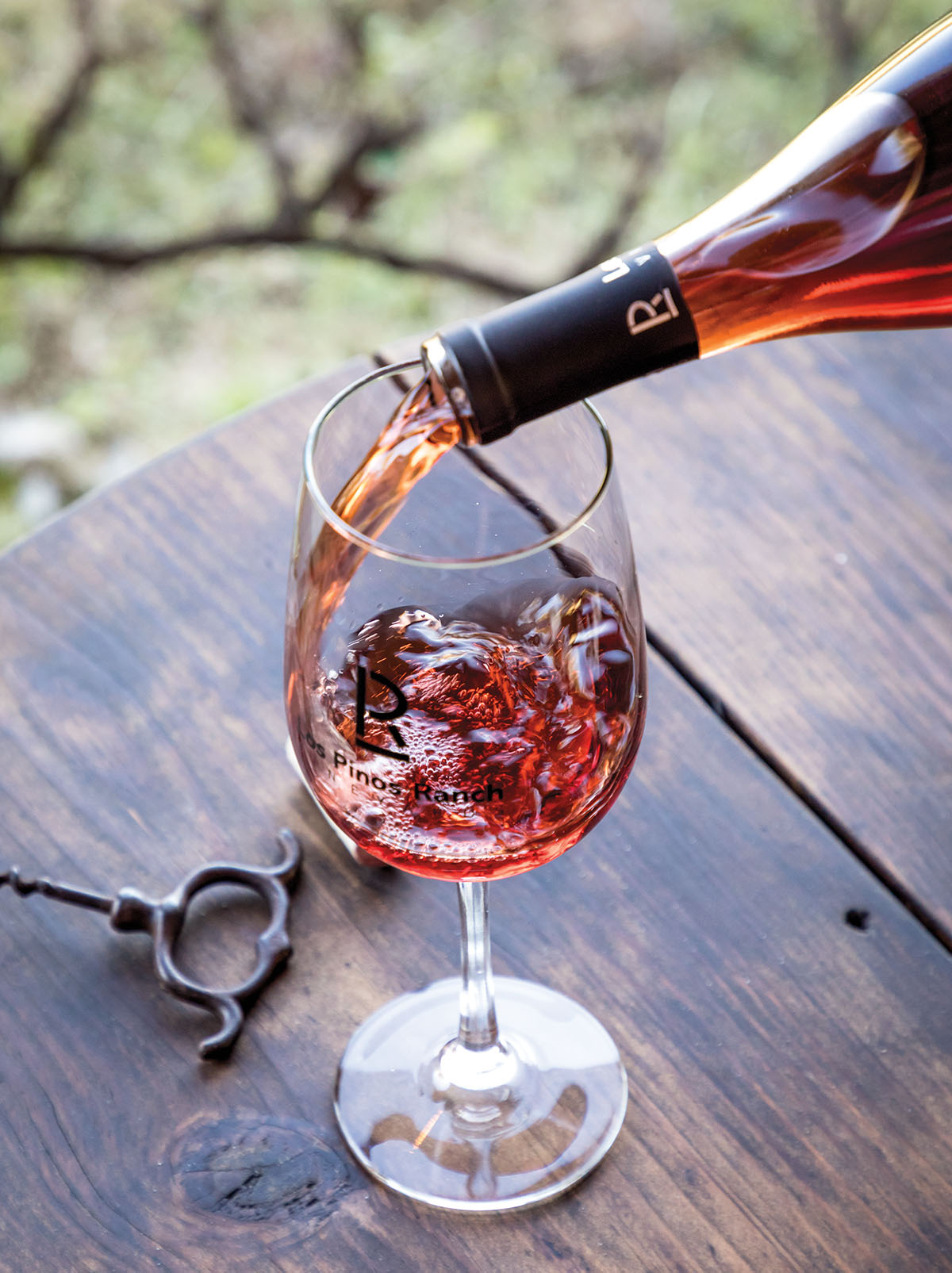 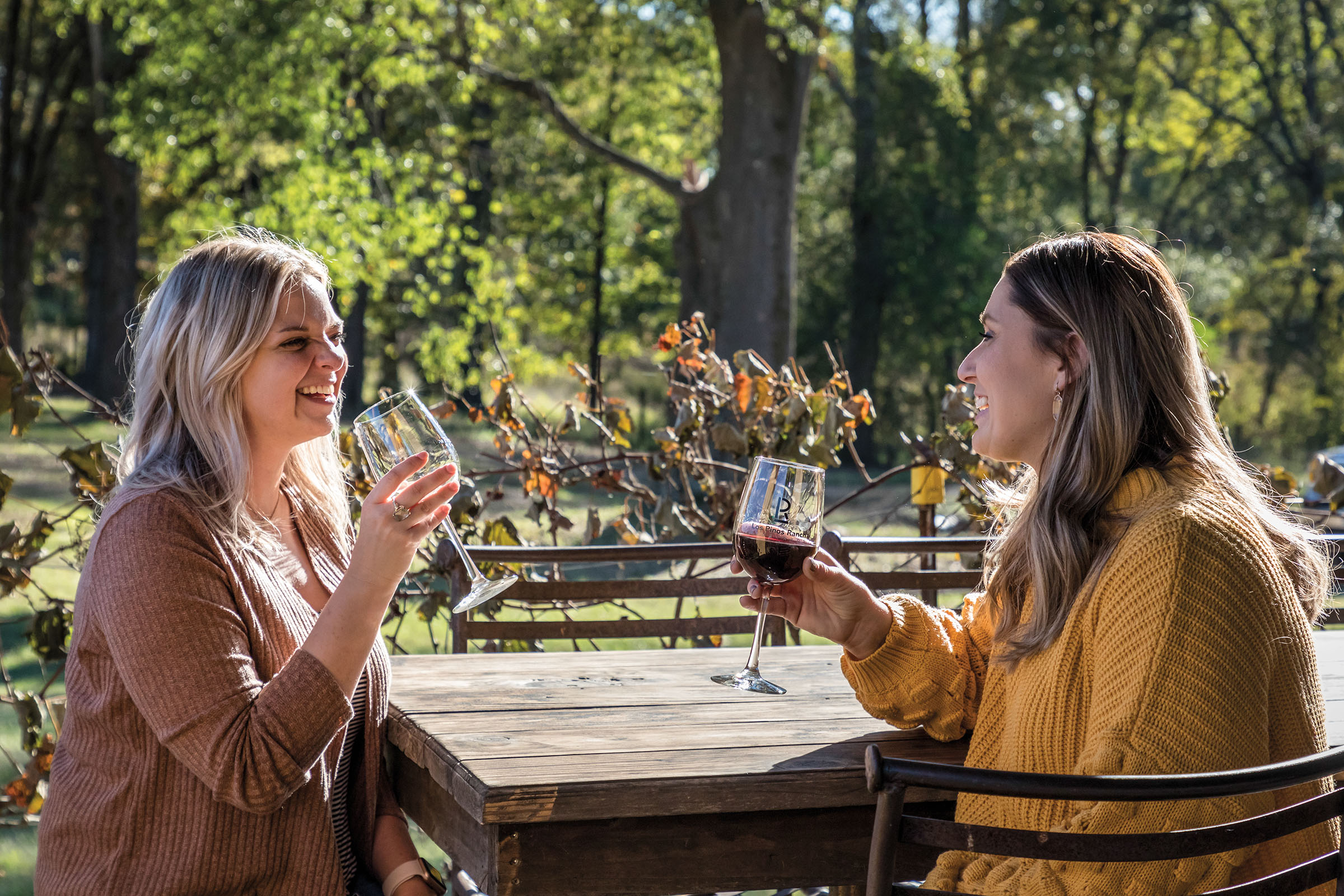 Meandering north through Gladewater and Gilmer, you’ll arrive at Los Pinos Ranch Vineyards, where winemaker Arnulfo Perez and his team specialize in Mediterranean-style varietals grown in the High Plains around Lubbock. They also make an award-winning white wine from estate-grown blanc du bois grapes, an American hybrid that’s resistant to Pierce’s disease. This crisp, aromatic wine sets just the right mood for enjoying live music on the deck as the sun sets behind the vineyards.

Perez, who grew up in a farming family near Cárdenas, San Luis Potosí, Mexico, takes advantage of relationships he’s nurtured in Spain as he coaxes flavors and aromas from sangiovese, cabernet sauvignon, tempranillo, and other grapes he receives from his growers. Natural fermentation using native yeasts, cold-soaking the grapes before fermentation, and long aging in oak barrels echo traditional Old World winemaking techniques.

A visit to Los Pinos encompasses more than good wine; managing partner Gerald Jones says his goal was to create a getaway. Guests can stay overnight in a rustic cabin overlooking rows of black Spanish grapes (brought to America by Spanish missionaries). There is also lodging next door at Relax and Wine Down, which has three casitas. A restaurant at the winery serves wood-fired pizzas and tapas, and an adjacent gift shop and tasting room offers samples of Los Pinos’ many wines.

On any given year, more than 90 percent of the wines Perez makes come from Texas grapes. “But growing grapes is agriculture, and it’s unpredictable and dependent on Mother Nature,” Jones says. “We have to deal with the cards that nature deals us every year. That’s the beauty and challenge of making wine.”

On what was once a 90-acre horse ranch in Harleton, Enoch’s Stomp Vineyard & Winery takes an educational approach to wine. The teaching happens in a hillside tasting room and restaurant overlooking its estate-grown blanc du bois grapes. Here, wine director Jonah Kral and his team of wine ambassadors lead tastings, conduct wine classes, and embark on tours of the vineyards. “Every class starts with a palate-introduction exercise that has nothing to do with wine,” Kral says. “We actually start with jelly beans and chocolate, which help people become aware of the flavors they’re detecting.” The classes have become so popular that Enoch’s Stomp recently opened a tasting room and coffee shop in nearby Jefferson. 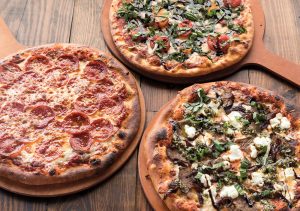 Enoch’s Stomp makes wines from estate-grown grapes and fruit brought in from West Texas—and sometimes from Chile and Washington state. “We had a windstorm come through in March right when our plants were budding, and we had a 10 percent harvest this year,” Kral says. “When you get into farming, you have to embrace the fact that you have incredible harvests some years, and while the next might not be so bountiful, you could wind up making the best wines you’ve ever produced.”

Last year, Enoch’s Stomp released 27 different wines, an all-time high. “Because a lot of what we do is educational, our large wine list lets us compare wines made from Texas grapes to those made out of state,” Kral says. “We teach people to think about acidity, sweetness, body, tannin, and alcohol content—the ‘big five’ of wine-tasting. Also, every white wine will have some notes of citrus and flowering plants, and every red will have red fruit, black fruit, or blue fruit. Think about those things, and the world of wine will open up to you.”