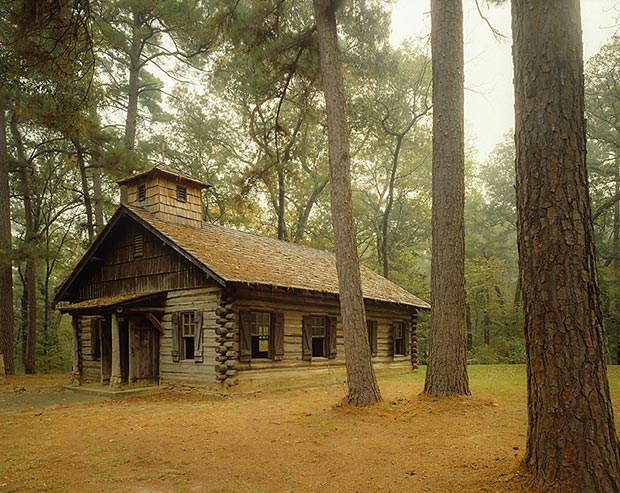 Despite my job as a Texas photographer and writer, I hadn’t visited many of East Texas’ state parks in years. In 2016, when University of Texas Press asked me to revise my 2008 guidebook, Official Guide to Texas State Parks and Historic Sites, I seized my opportunity and hit the road. The experience was a bit like renewing old friendships; I not only saw things I remembered from previous visits, but I also found new surprises. Here are some highlights from my East Texas favorites.

For good reason, scenic Caddo Lake is one of the state’s most popular parks. The shallow waters of the only significant natural lake in Texas foster the growth of a primeval thicket of bald cypress trees. Narrow channels wind through groves of the trees. Spanish moss dripping from the branches lends a spooky air to the lake. The large lake was originally formed by a massive log jam on the Red River in Louisiana; its water level was first stabilized with a manmade dam in 1914. The Army Corps of Engineers completed the lake’s current dam in 1971. The habitat contains more than 70 species of fish, with largemouth bass, crappie, catfish, white bass, and chain pickerel being the most popular with anglers.

The park faces Saw Mill Pond, a mysterious-looking arm of Big Cypress Bayou at the upper end of the lake. In the 1800s steamboats once followed the bayou upstream from the lake to the bustling port of Jefferson. Canoe rentals at Saw Mill Pond allow anyone to paddle the lake’s shallow waters. If you paddle out onto the bayou and into the main part of the lake, watch your way carefully with maps and GPS units. It’s not hard to get lost in the many winding channels. If you are inexperienced and want to venture far out onto the lake, consider hiring a guide.

The lake is the park’s most popular feature, but after you claim one of the three lakefront campsites or many woodland campsites and paddle around, be sure to hike the park’s network of hilly woodland trails. The Civilian Conservation Corps (CCC) built the park’s rental cabins during the Great Depression and also constructed a stone-and-timber pavilion hidden away in the forest. But if you want to see it, you’re going to have to hike a bit and look for it. Afterward, relax at your campsite and listen to the crickets and owls as night falls. 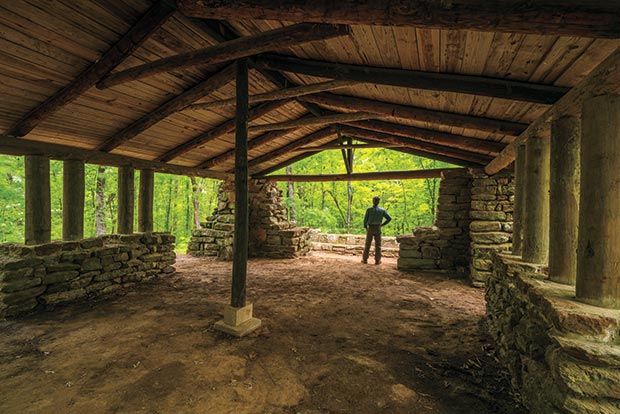 Like I do in all of Texas’ lake parks, I expected good fishing piers, picnic areas, swimming, camping, and boating at Cooper Lake. However, on my recent visit I found even more at the hilly South Sulphur Unit, on the south side of the lake. The south unit offers more than 100 campsites with walk-in tent sites, screened shelters, equestrian sites, and standard RV sites with water and electric hookups. All have shady, widely spaced areas in lush woodland. For those who don’t want to rough it, the south unit offers 14 wooden, metal-roofed rental cabins perched on a bluff above the lake. Decks jut out over the water, offering perfect sunrise or sunset views.

After claiming my campsite, I walked the well-maintained Coyote Run hike-and-bike trail through lush bottomland and over low hills. I wandered the shoreline and photographed some distinctive rock formations. The smoothly rounded rocks looked like the backs of hippos buried in mud.

The CCC built Daingerfield during the Great Depression. The park is centered around an 80-acre lake tucked into a hilly area of northeast Texas. The forest hasn’t been logged for at least 80 years, so some of the loblolly pines, oaks, and other trees shading the park’s four campgrounds reach as high as 100 feet. A woodsy trail loops the lake, and spur trails climb to the top of one of the park’s highest peaks, gaining about 180 feet and offering views of pine-covered hills. If boating is your thing, rent a canoe, kayak, paddleboat, or paddleboard by the CCC pavilion.

The park is known as one of the best areas in Texas to view fall color in November. People come every year to see sweetgums, maples, and other trees in their autumn finery. 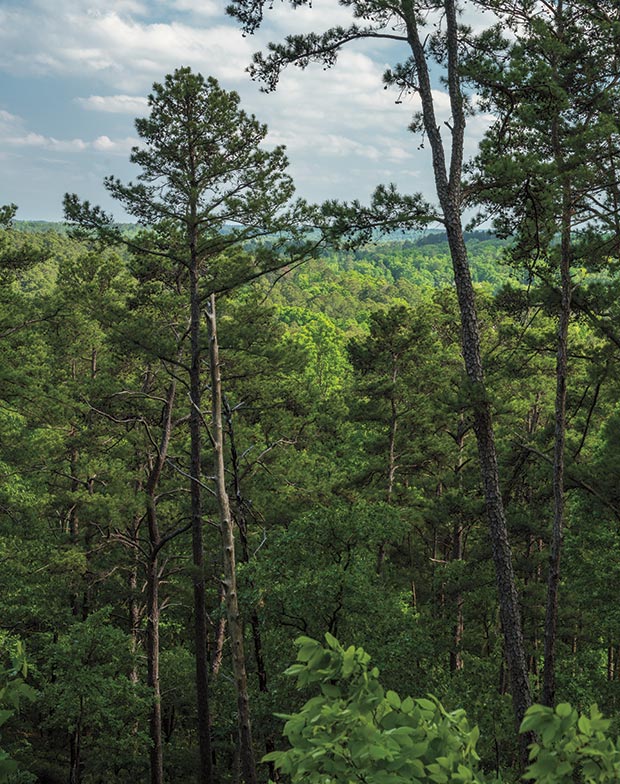 Even though it lies close to Interstate 45, Fort Boggy’s 1,800 acres comprises one of the state park system’s hidden gems. A quiet 15-acre lake fringed with oaks and other trees offers fishing, swimming, and no-wake boating. Hikers and mountain bikers can explore the park’s 3.5-mile network of trails. Although Fort Boggy doesn’t have a formal drive-in campground for tents and RVs, it does offer five very secluded hike-in tent sites for visitors willing to carry gear a short distance. If you want quiet camping, Fort Boggy delivers. For visitors who want to enjoy the park overnight but aren’t prepared to hike to a campsite, three new wooden cabins are available for rent. They have air conditioning, a minifridge, and a microwave (but you’ll need to bring your own linens and share a nearby bathroom). Each one has a large, partly screened porch with plenty of comfortable deck furniture. After hiking, boating, or fishing, you can put your feet up in your own private cabin tucked away in the woods.

Martin Dies, Jr. State Park occupies low-lying peninsulas and islands on the shore of B.A. Steinhagen Lake, which is fed by the Neches and Angelina rivers. The lake was created by a dam completed in 1953 by the Army Corps of Engineers. The park offers kayak and canoe rentals, and paddlers have numerous route options, from cypress-fringed shady sloughs tucked between campgrounds to open shoreline. Boaters equipped with a map and GPS unit can paddle into a maze of channels where the Neches River empties into the lake. For those who want to keep their feet dry, about 8 miles of hiking trails traverse the deep woodland and lakeshore. And for people who just want to take in the scenery, the park offers more than 200 campsites and screened shelters shaded by towering loblolly pines, magnolias, oaks, and other trees on the lakeshore or backwater sloughs. Most offer water and electrical hookups, and many have a great sunset view.

Mission Tejas, a sleepy spot tucked away deep in the Piney Woods, honors a nearby site where Spain attempted to maintain its territorial claims in East Texas. In 1690, in an effort to limit French incursions and to convert native tribes to Christianity, Captain Alonso de León led an expedition to establish the first mission in the province of Texas near the Neches River. Smallpox, drought, and cultural clashes led to the mission’s abandonment only four years later. The mission was re-established and abandoned two more times in the following years. By 1730, the Spanish had abandoned the mission for good.

This log cabin offered early 19th-century travelers a respite along El Camino Real, which connected San Antonio to Nacogdoches and points beyond.

In 1934, the CCC built the park, including a chapel to commemorate the Spaniards’ missionary efforts. The park’s 1828 Rice Family Log Home is one of the oldest buildings in the area. The log cabin—originally built 16 miles away—offered early 19th-century travelers food and lodging on El Camino Real, which connected San Antonio to Nacogdoches and points beyond. In 1973, the log cabin was donated to the park and moved to its current site. Visitors can tour the two historic structures, camp in the small campground tucked away in a shady hollow, and walk several miles of trails. Highlights of the trails include a pond and the hilltop site of an old fire lookout tower.

Unlike quiet Mission Tejas, Tyler State Park—a retreat also created by the CCC—bustles year-round, especially in the fall when the park’s sweetgums and maples change color. Heavily wooded hills encircle a 64-acre lake, and multiple campgrounds are tucked away in the park’s deep forest.

The park rents kayaks, canoes, and other boats; and swimmers can enjoy the water when the weather is warm. More than 13 miles of hiking and mountain-biking trails wind through the woods and along the lakeshore. Don’t miss the Lakeshore Trail with its fishing piers and water views. At the upper end of the lake on the southeast side, beavers have been hard at work building dams that sometimes flood the trail. The three-quarter-mile Whispering Pines Nature Trail features a children’s wading pool and a 4-foot waterfall both fed by a spring. 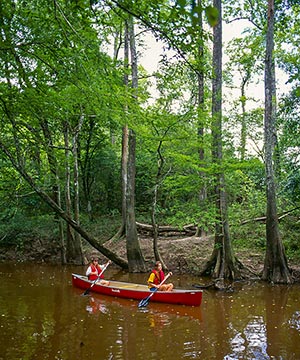 Village Creek is best-known for its paddling trails.

Lush Village Creek State Park lies on the southeastern edge of the Big Thicket, a once-vast wild area of East Texas known for its multitude of habitats. The terrain ranges from sandy hills with prickly pear cactus and pine trees to swampy cypress-tupelo sloughs. The park offers 25 RV campsites with partial hookups and 16 walk-in tent sites, plus a rental cabin. The intrepid can rent a canoe from nearby outfitters, paddle down Village Creek on the 21-mile canoe trail, and primitive-camp on sandbars with the clear, tea-colored creek waters lulling weary travelers to sleep. The canoe trail offers multiple access points allowing trips of a few hours to two or three days. The lowland creek doesn’t have rapids, but its tannin-stained, flat water moves steadily, making travel easy. Although the park is best known for its paddling opportunities, it also has 8 miles of hiking and mountain-biking trails that wind through dry sandylands and along swampy sloughs. There’s also a nice sandy swimming beach on the banks of Village Creek downstream from the main part of the park.

Much of the park was damaged by flooding from Hurricane Harvey, so it may be several months before the park’s facilities are fully restored.

Wimberley-based writer and photographer Laurence Parent lives to hit the open road in search of Texas’ natural wonders. He specializes in landscape, travel, and nature photography.