The Primordial Paddlefish Is Being Reintroduced to Texas Lakes 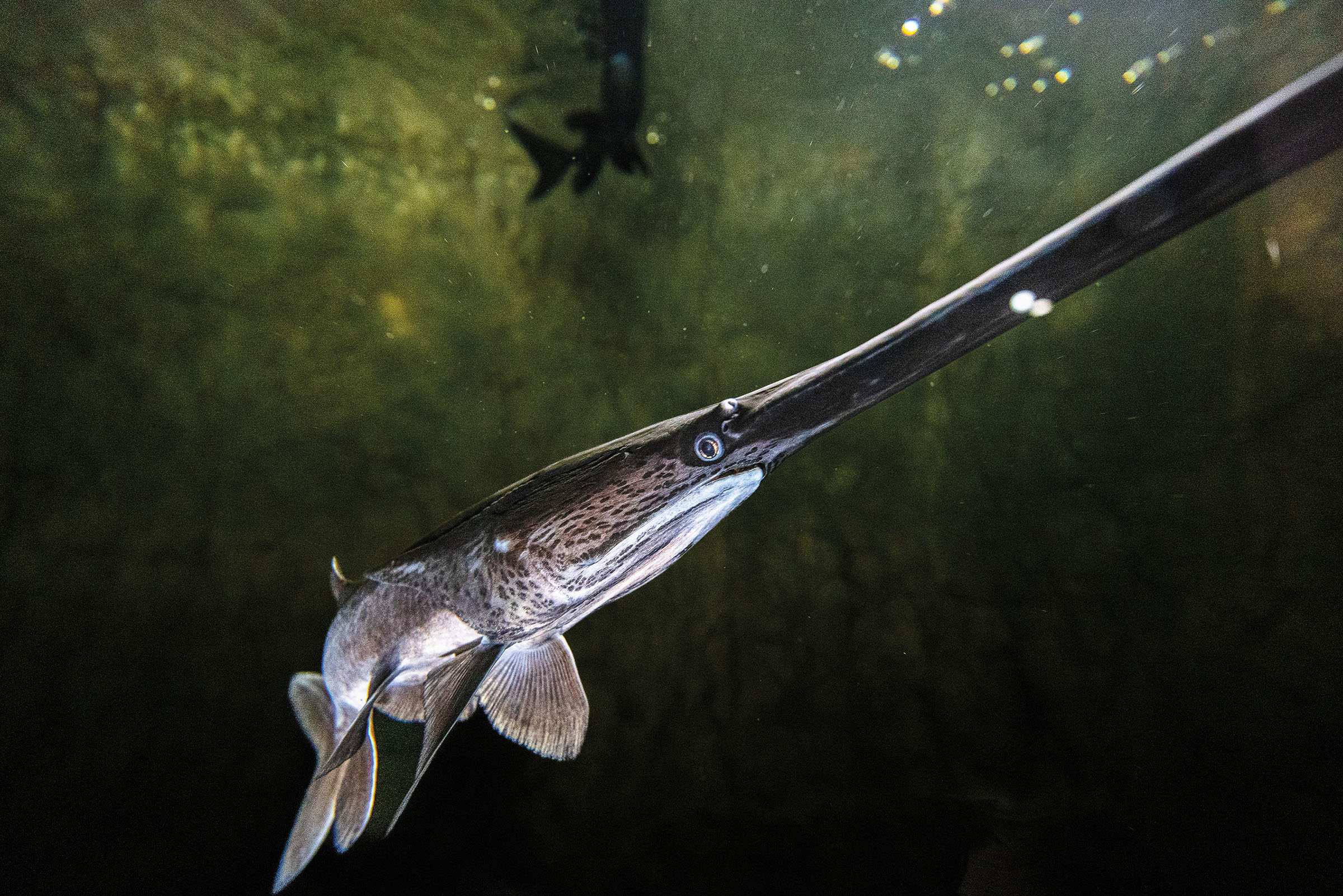 The American Paddlefish is more than 100 million years old.

One morning in early September 2020, a tanker truck from the National Fish Hatchery in Tishomingo, Oklahoma, rumbled down US 271 toward Caddo Lake in East Texas. Normally, the truck carries bass and other sport fish in its tank, ready to replenish one of Texas’ many reservoirs. That day, however, the tank was filled with something curious: 6,500 baby paddlefish, velvet-skinned beasts with long oar-like noses, called “rostrums,” and faintly shocked expressions.

The American paddlefish is the last surviving species of a 125-million-year-old family, according to Timothy Bister, a district fisheries biologist at Texas Parks and Wildlife. (Its last remaining relative, the Chinese paddlefish, was driven extinct between 2005 and 2010.) Growing up to 5 feet long and weighing around 100 pounds, paddlefish once swam the length and breadth of the Mississippi River drainage, including the Sabine, Neches, and Red rivers. One of their strongholds was Caddo Lake, an intricate system of bayou rivers, seasonally flooded swamps, and open water. At the beginning of the 20th century, paddlefish spawned in gravel beds scoured clean by spring floods, and their young grew to maturity in flooded bottomlands and oxbow lakes among the hardwoods.

But in 1959, the U.S. Army Corps of Engineers dammed the lake’s major tributary to create the Lake O’ the Pines reservoir. The construction was part of a frenzy of dam building across the state, with the goal of taming flooding. Though well-intentioned—floods can be dangerous to life and property—these projects reshaped waterways, causing rivers to channelize. This silted up their bottoms and deprived fish of breeding areas.

“Flooding is a part of a natural ecosystem,” said Mike Montagne, a biologist with the U.S. Fish and Wildlife Service who is leading a paddlefish reintroduction effort. “A lot of fishes’ whole life cycle relies on those flooded bottomlands or high-water flows to clean the shoals off so they can spawn. A lot of these specialized species need specific conditions to be able to reproduce.” 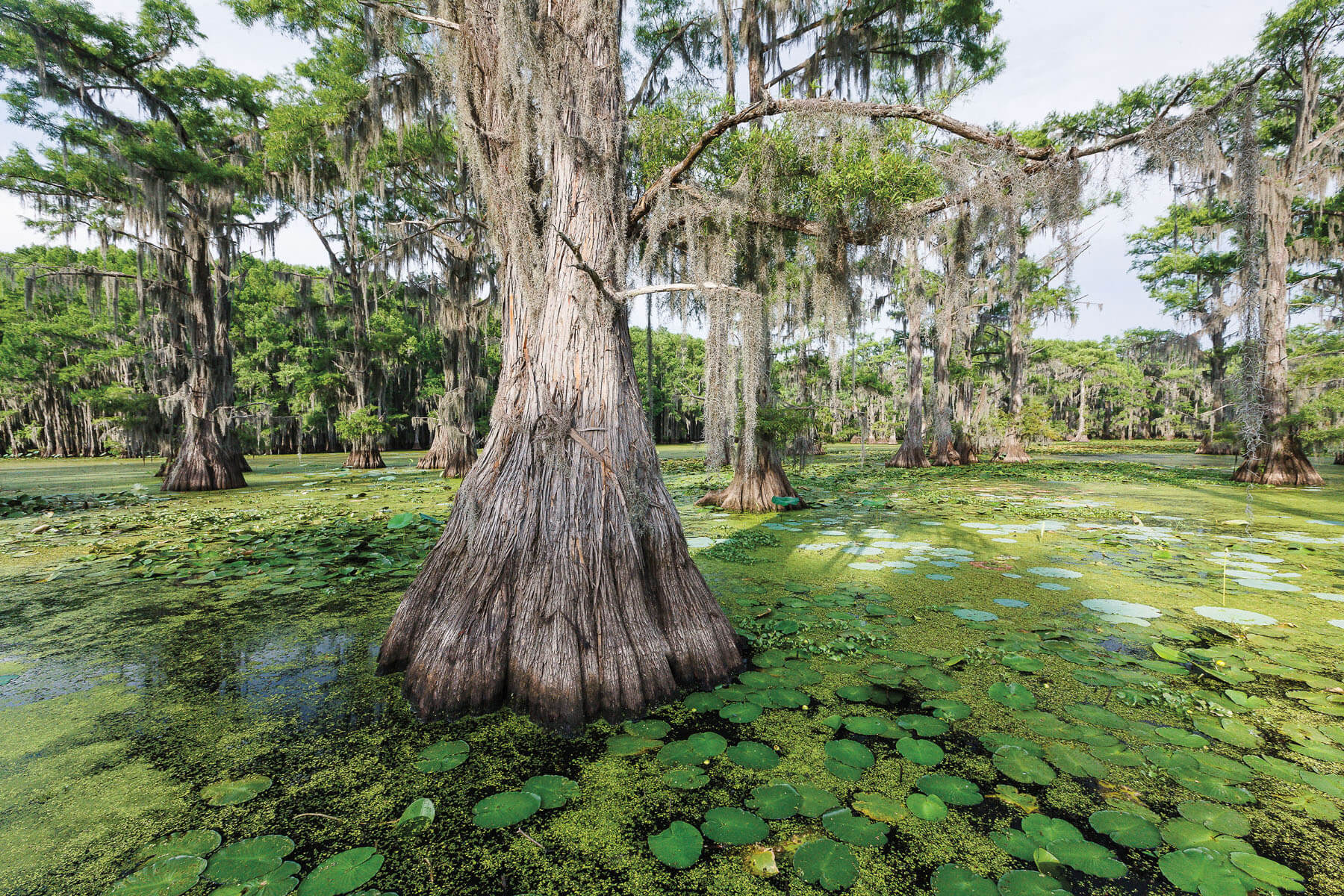 The dams also proved to be an insurmountable physical barrier. “The biggest problem these fish face is the fragmentation of their habitats,” Montagne said. “We’ll find them sitting below these man-made structures trying to go upstream, but they’re just blocked.”

By the late 20th century, a deadly mixture of overfishing and dam construction put terrible pressure on an animal that had inhabited America’s changing rivers for more than 100 million years. Caddo Lake proved a case in point. In 1977, Texas declared the paddlefish threatened. Deprived of the spring pulses that told them when to spawn and the necessary gravel beds, the lake’s population of paddlefish dwindled to nothing by the 1980s. Paddlefish disappeared from East Texas rivers as well, pushing this prehistoric relic into local extinction.

The paddlefish being transported to Caddo Lake in the tanker truck in 2020 were part of a test to figure out whether a different strategy of dam management could again make Big Cypress Bayou suitable for its rarest fish. 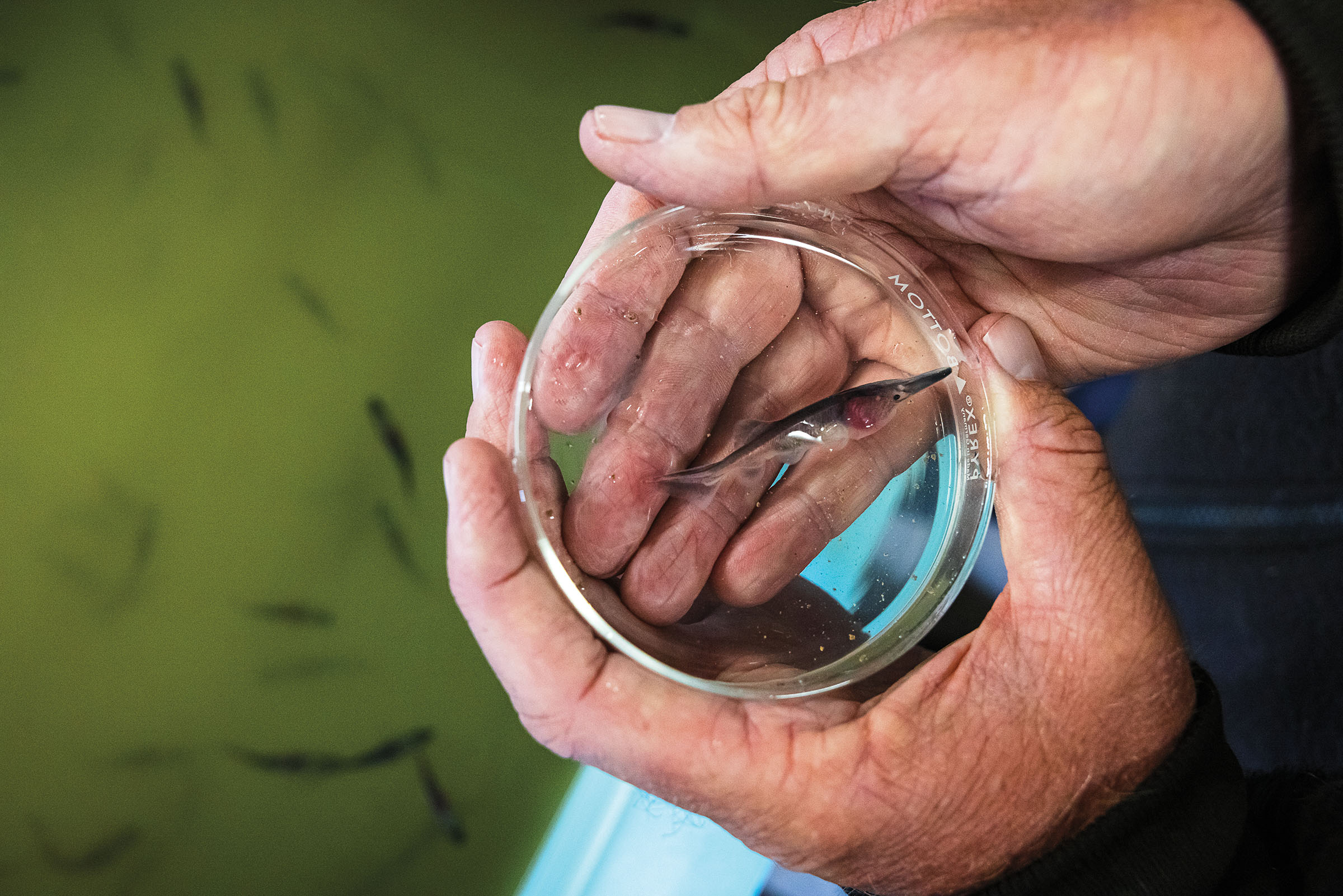 In 2010, Montagne netted his first paddlefish, from Lake Texoma on the Oklahoma border. He and his colleagues were catching fish for Paddlefish Day, a celebration held in Jefferson, where paddlefish are shown off to drum up support for their conservation. This one was 30 pounds, soft and fleshy, with a body like a shark and that strange, flat nose. Up until then, Montagne had never even seen one. “I thought, wow, this thing is just incredible looking,” he recalled. “I can’t tell you the first time I caught a bass or trout, but I can certainly tell you about the first time I caught a paddlefish.”

Montagne came to Texas under the auspices of the National Fish Passage Program, which tries to remove barriers for fish and promote connected river habitats. One of his first assignments was to examine the dam at Caddo Lake. He wanted to see if it would be possible to install a fish passage ladder—a set of artificial raised pools that help fish get around dams—for paddlefish.

He arrived at the perfect time. In 2011, the Caddo Lake Institute partnered with the U.S. Fish and Wildlife Service, U.S. Army Corps of Engineers, Northeast Texas Municipal Water District, and Texas Parks and Wildlife to create a more natural flow regime. The goal of the conservation nonprofit, founded by Don Henley of the band the Eagles and based in Shreveport, Louisiana, was to refashion the dam’s spring water releases into something resembling old river patterns. This would help restore healthy riparian forest and aquatic habitat.

“The work of figuring out what types of flows we could get from that dam led us to realize the paddlefish could be returned if those conditions could be restored,” said Laura-Ashley Overdyke, executive director of Caddo Lake Institute. “And if the return of the paddlefish was successful, it would tell us that our flow regime was doing a good job of mimicking Mother Nature.”

Montagne’s office temporarily tabled the idea of a fish passage ladder and instead began reintroducing paddlefish, eventually leading to the first steps of a restocking plan. In 2014, Montagne and his partners released 50 two-foot-long radio-tagged paddlefish into Caddo Lake. For a year, they followed their radio signals, making sure they stayed inside the lake system. 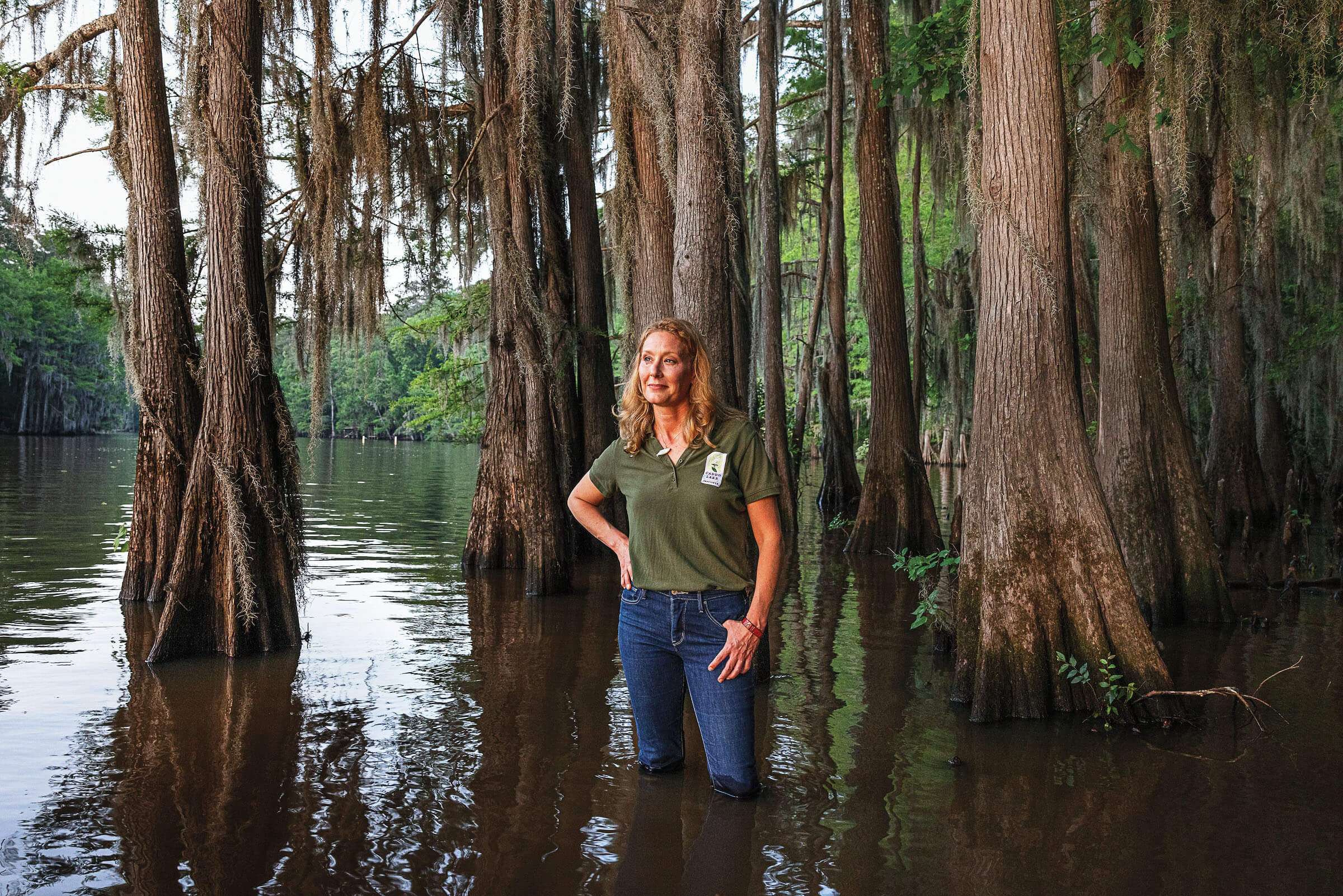 Then, in 2018, the Paddlefish Stocking Plan began: a 10-year project starting with the first annual release of 10,000 foot-long babies direct from the Tishomingo National Fish Hatchery. Each released fish has a small wire tag stuck in its rostrum, and if a fish is recaptured for any reason in the future, it will be surgically implanted with a radio tag that can last up to 10 years. “We can use the tags to track them through spring and see where they go,” Montagne said. If the fish congregate in certain spots around spawning time, that’s a clue they might be trying to breed. “At that point, we can go in and look for eggs or larval fish,” he added. “And if we find anything below a 12-inch fish, we can say that this might be natural reproduction.”

But it will be a while before that happens. Paddlefish aren’t the easiest fish to breed—they tend to be finicky, and they take around six years to reach sexual maturity. The earliest fish released into the lake will reach breeding age in 2024. And of the 14,000 fish released annually, only about half run the gauntlet of predators and such and make it to maturity. Setbacks and spawning failures wiped out the juvenile paddlefish being raised at various fish hatcheries over the course of 2021, according to Overdyke, making it the first year since the program started without a release.

The paddlefish program is now attempting to make up for lost time. Throughout February, the U.S. Fish and Wildlife Service caught 20 new paddlefish from the Red River to serve as breeding stock at the Natchitoches National Fish Hatchery in Louisiana. Similar expeditions occurred in Lake Texoma for paddlefish production at Tishomingo National Fish Hatchery. Now, the goal is to raise a new bumper crop of babies and release them throughout the summer.

“People around Caddo Lake are happy about the successful reintroduction of one of the oldest fish species on Earth to its ancestral waters,” said Gary Endsley, director of Collins Academy, an organization specializing in environmental conservation and historic preservation in Jefferson. “School children and the public are proud to be involved with the science and the riparian and aquatic habitat monitoring and improvements the project has promoted.” 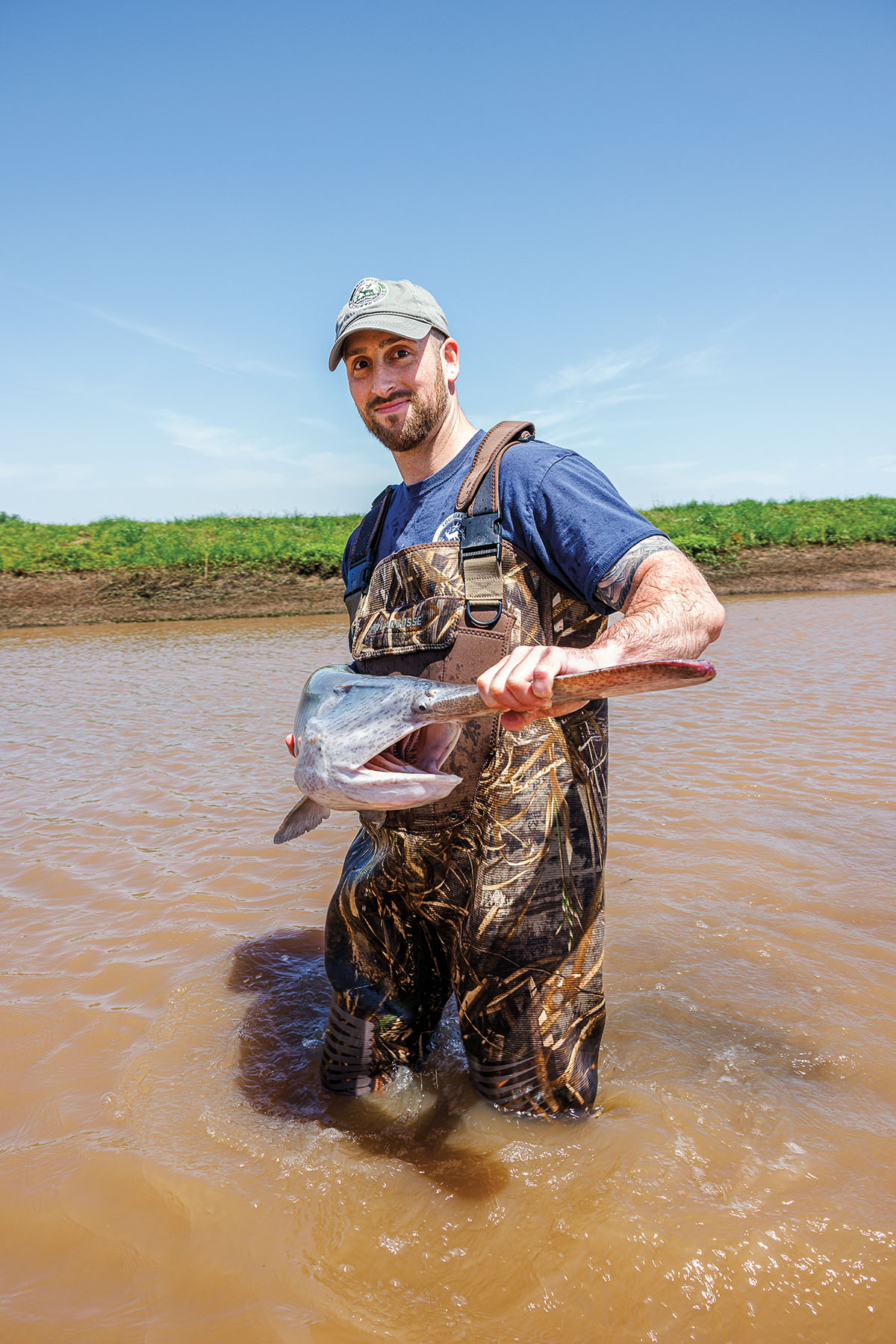 The “fish cannon” is a common stocking method. After a U.S. Fish and Wildlife Service staffer drives a tanker truck full of thousands of gallons of water and fish to a lake, they open a porthole at the back of the truck. Over 3,000 gallons of water find a narrow escape route, arcing out in a pressurized stream into the lake. Paddlefish shoot out with the water, their long bodies wriggling as they hit the surface and swim away.

To see the fish cannon and for news on releases, visit caddolakeinstitute.org or follow the Caddo Lake Institute on Facebook. 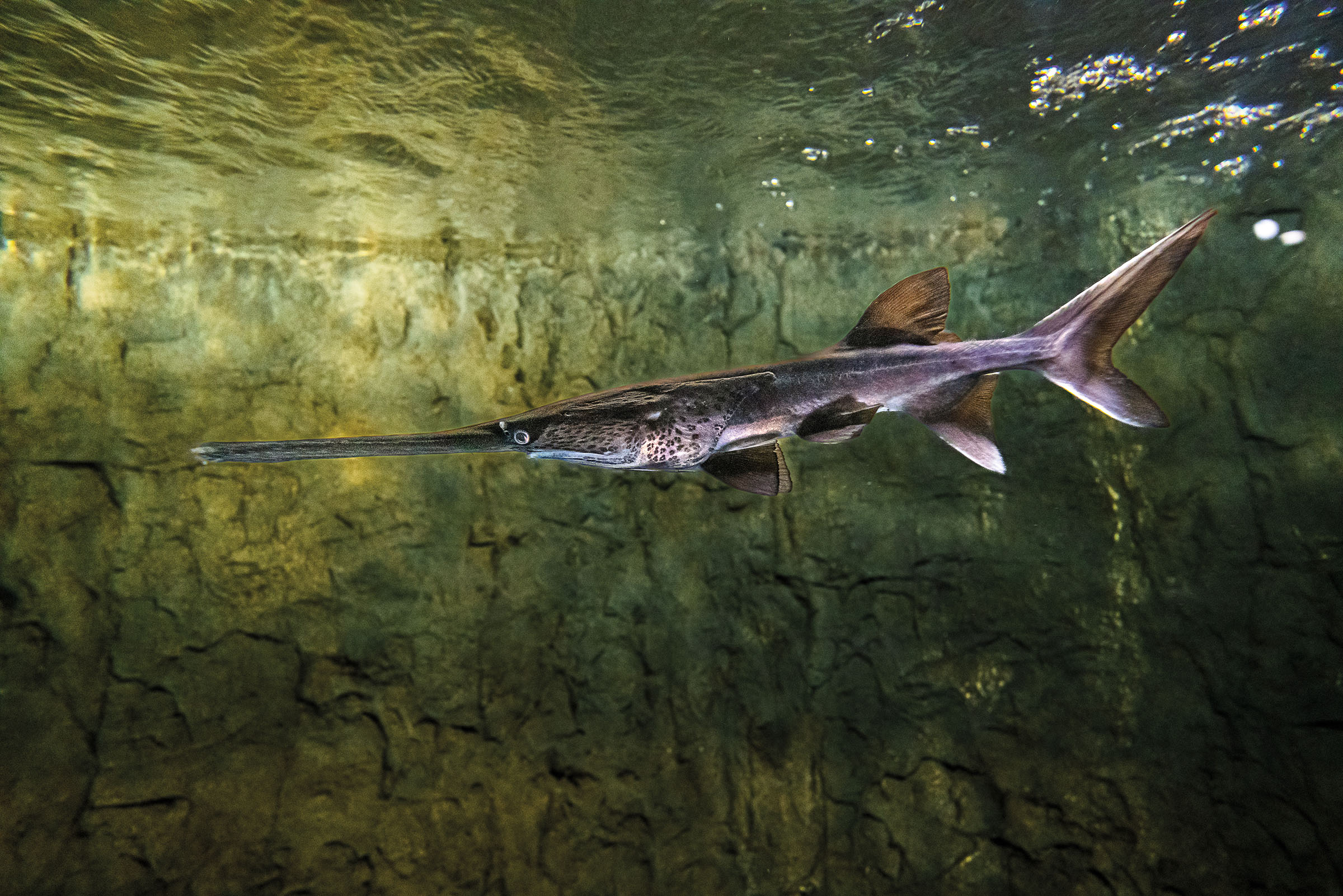 The paddlefish’s distinctive nose is called a “rostrum.”

The paddlefish releases happen irregularly and often with less than a week’s notice. Nonetheless, they tend to draw healthy crowds, proving paddlefish are excellent ambassadors for more naturalistic water-management programs. People also just like the ceremony.

The tanker truck arrives from Tishomingo around noon and backs up to the boat ramp at Caddo Lake State Park in Karnack. For half an hour, officials mix water from the lake into the tank to help the nervous young fish acclimate to their new home. A few buckets of fish are then brought out to show the people gathered around the boat dock. A lucky few are allowed to gently lift out a fish and reverentially carry it down to the water and release it. The rest of the hatchlings are released via a pipe called a “fish cannon,” which blasts them into the lake.