For the St. Mary's Adventure Tour, participants wear harnesses and clip onto safety ropes as they climb to previously unseen parts of the San Antonio cavern 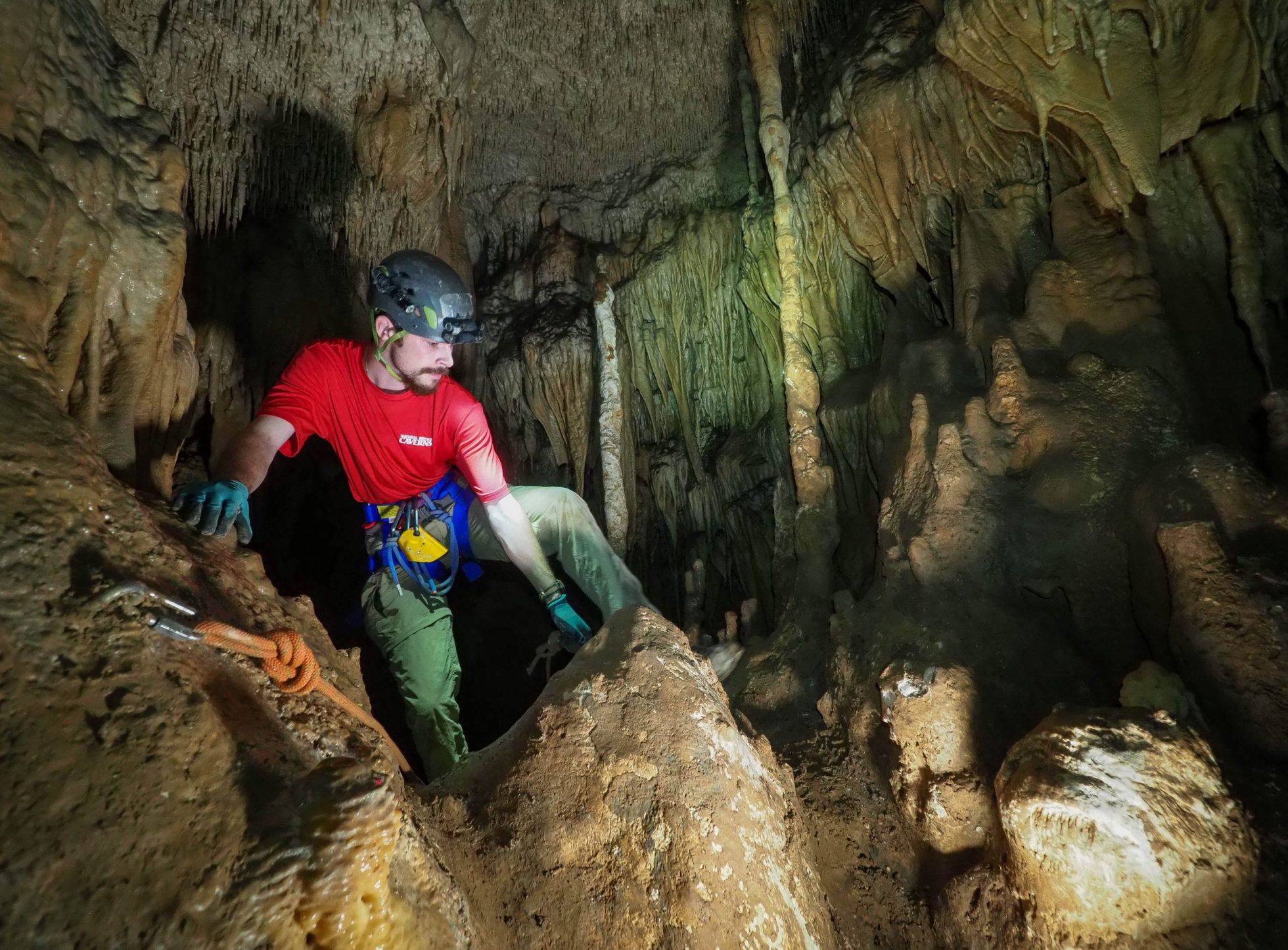 A new tour at Natural Bridge Caverns takes visitors up rocky inclines and across slippery ledges into portions of the cave never before seen by the public.

The St. Mary’s Adventure Tour diverges from the paved pathway in the main halls of the cave and into wilder sections of the underground network. Participants wear helmets, gloves, headlamps, and harnesses, and clip onto safety ropes as they navigate tricky stretches.

“There’s lots to see back there,” says tour guide Ethan Fagan, who along with team leader John Young helped design the new tour at the cave north of San Antonio.

“When you’re a kid, you look through National Geographic and see pictures of cavers wearing harnesses and gear,” Young adds. “One of the reasons I designed this was to give people the opportunity to get a harness on and have that same experience.”

Four students from St. Mary’s University in San Antonio first discovered the Natural Bridge Caverns—named for a 60-foot natural limestone bridge that spans the cavern’s entrance—in 1960. Explorers have surveyed 3.65 miles of the subterranean network, which reaches 304 feet deep at Popcorn Pit, its deepest known point. They’re still exploring, too. The cave’s owners say they hope the new experience will inspire visitors to advocate for and protect delicate cave environments.

The St. Mary’s route takes visitors past tall, baseball-bat sized columns called broomsticks, beneath ceilings of delicate, dripping “straws,” and near formations that look like fried eggs, drapes, wings, and, in one spot, a cup of crème brulee perched atop a pedestal. In one area, thin blades of calcite create a honeycombed pattern of boxes that cling to a wall, and in another, mineral deposits form what look like wide, slick ribbons. “The formations are absolutely incredible,” Young says. 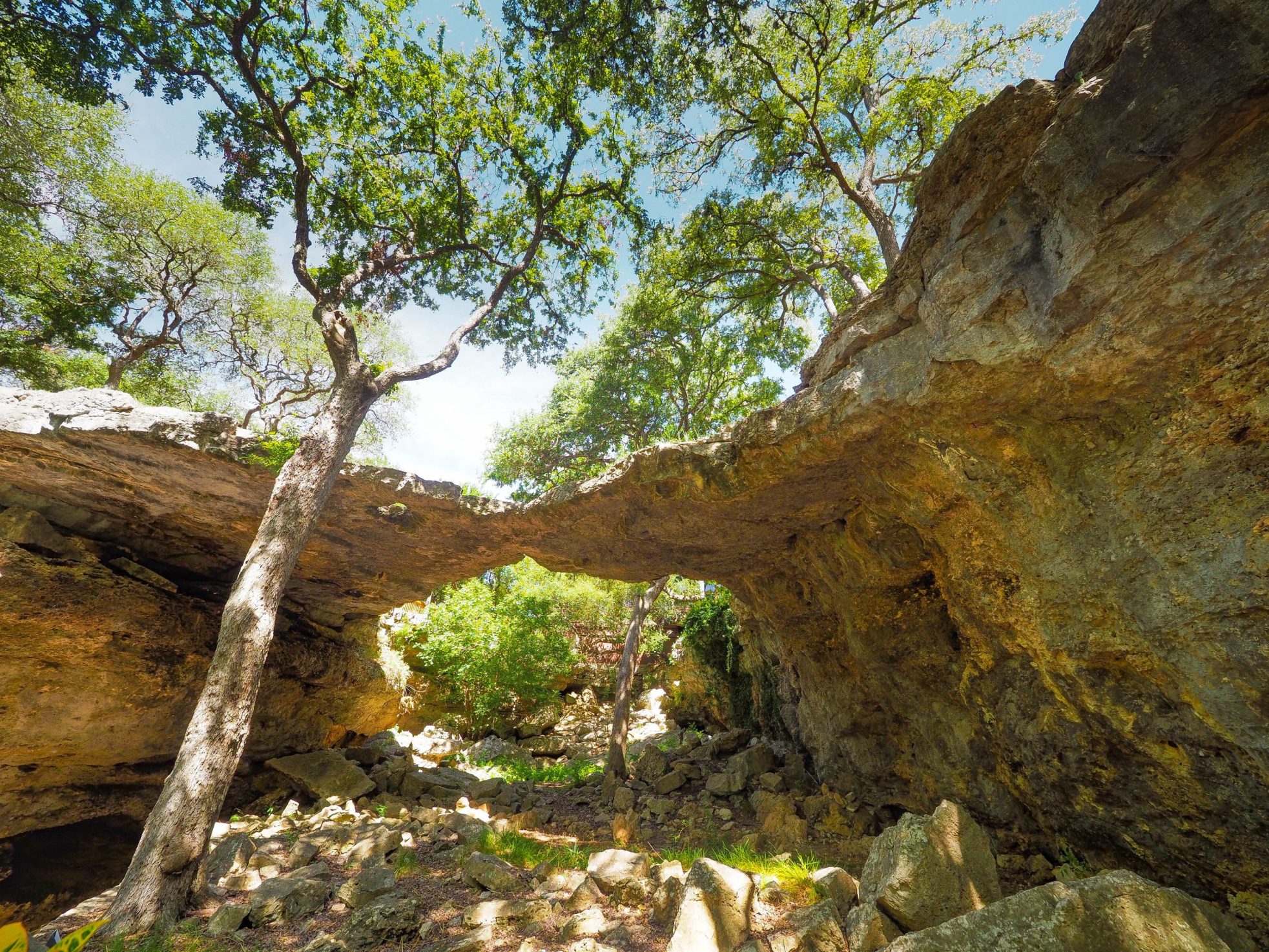 A natural limestone bridge gives the caverns their name.

It’s wet inside the cave, and anyone who takes the tour should be prepared to submerge their boots in pools of water. (Don’t worry, showers are available at the end.)

Before descending into the cave, participants in the St. Mary’s Adventure Tour practice clipping the carabiners attached to their harnesses to safety ropes. Once inside the cave, they use those skills to make two steep climbs and scooch their way around the Fairy Pit, a 30-foot hole that looks less like fairy’s home and more like someplace the Creature of the Black Lagoon might hang out.

Wildlife sightings in the tour may include bats and various insects, including spiders and crickets that make their home in the dark, damp recesses of the cavern. At one point, the guides will flip off their lights, cloaking the cave in utter blackness. “This is like going to church for me,” Young says.