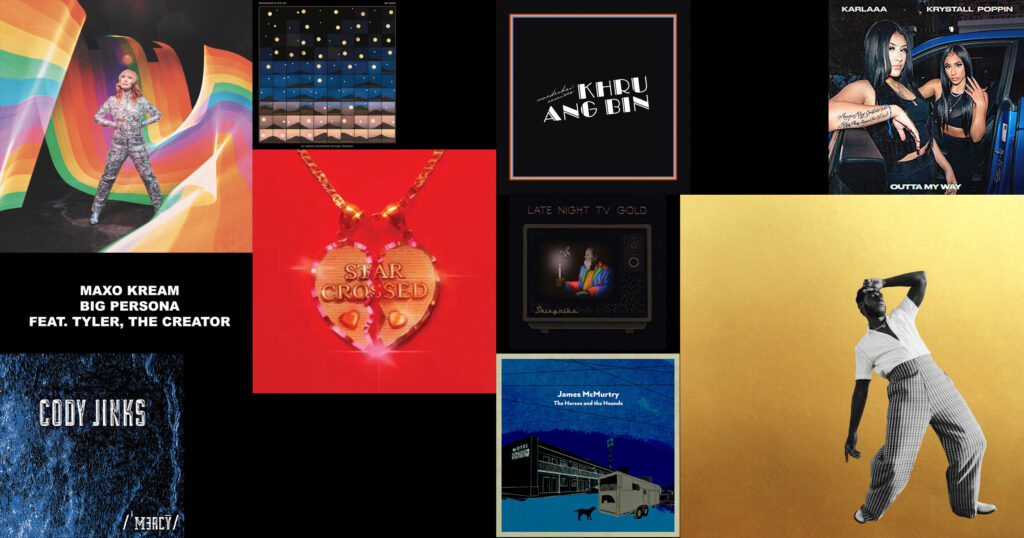 Autumn has arrived in Texas. For some (heck, for most), fall doesn’t seem terribly different from summer, especially given the comparatively mild temperatures much of the state experienced in 2021. Nevertheless, it’s a big state and an especially fun one to explore during this time of the year. To accompany your next trip, here are 11 songs (and a full album) from recently released and upcoming albums that feature a range of genres including country, hip-hop, soul, rock, funk, and Americana, all by artists who hail from the Lone Star State.

“It was a fun, strange summer,” is how the East Texas native opens this post-breakup tune from her new album Star-Crossed (released Sept. 10). Like any good classic country-pop divorce record, the lyrics chronicle the breakup of a marriage—in Musgraves’ case, her split from fellow musician Ruston Kelly. “Healing doesn’t happen in the straight line,” she sings. Man, no kidding.

Houston rapper Maxo Kream’s latest album, Weight of the World, is due in October. This new single features Tyler, the Creator, who released the excellent Call Me If You Get Lost earlier this year. “Big Persona” is pure Houston rap, designed for blasting out of slow-rolling cars around H-town and the Gulf Coast.

“Climbing Bear” by Explosions in the Sky

In February, PBS premiered Big Bend: The Wild Frontier of Texas, a documentary narrated by Thomas Haden Church about the world famous state park. In October, Explosions in the Sky (best known for providing music to Friday Night Lights) will release its soundtrack for the film. Clocking in at a little over three minutes, “Climbing Bear” is a comparatively short slice of what this Austin band does: epic, layered guitars, bass, and drums that stretch all over the horizon.

“If It Don’t Bleed” by James McMurtry

As summer drew to a close, James McMurtry released The Horse and the Hounds, his first studio album since 2015. Here, the singer-songwriter, who turns 60 next March, blends Neil Young-ish guitar crunch and canny lyrics about making peace with where he is.

“Why Don’t You Touch Me” and “Steam” by Leon Bridges

The title of Bridges’ new album, Gold-Diggers Sound, feels like an in-joke about ambition: He doesn’t abandon the vintage soul vibes that made him famous, but this album is definitely from the 21st century. He knows his way around ballads like “Why Don’t You Touch Me,” so it would be great to hear him play with more songs like “Steam,” a light, up-tempo slice of R&B pitched between old and new.

Most think of Houston when they think of Texas hip-hop, but Latina rapper Krystall Poppin is from El Paso and joined by Midland talent Karlaaa. At almost two minutes, “Outta My Way” feels less like a finished track than a thesis statement (or a joint ripe for a few more voices). Still, it’s a welcome one. As they put it, “We from Texas where the time is slow:”

This Houston band (pronounced “KRUNG-bin”) has become a cult sensation by sounding like everything at once and nobody else. Elements of surf, dub reggae, rock, soul, East Asian, Middle Eastern music, and more abound in their brilliant instrumentals. On this album, various hands turn songs from Khruangbin’s third album, Mordechai, into dance tracks both chilled and energetic. Every track is worth putting various points on a mixtape.

The rootsy, swampy Shinyribs, led by singer Kevin Russell, formerly of Gourds fame, gets mellow on this single from the brand new Late Night TV Gold. With its classic sound and lyrics like “Sweet as a magnolia hanging over the house; peaches on a picnic table, I pop them in my mouth,” this song could have been written in 1976, 1996, or 2026.

“How Low” by Heartless Bastards

Erika Wennerstrom has been the sole constant in the Heartless Bastards since the band’s beginning. The mid-tempo “How Low” calls for community and understanding in a time of grief, division, and endless greed.

“All It Cost Me Was Everything” by Cody Jinks

Fort Worth country songwriter and future metalhead Cody Jinks is releasing two albums this November, a country one called Mercy and a metal one with the band Caned by Nod called None the Wiser. This is the first single from the former, a manifesto of sorts by a country artist with nothing to lose.