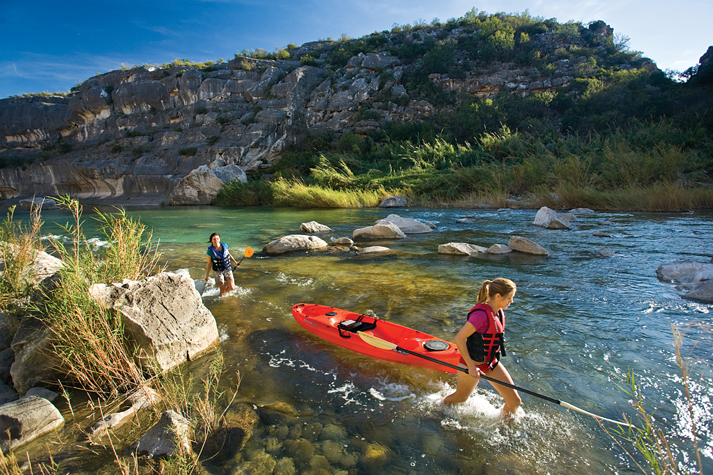 Amistad. The Spanish word means “friendship,” but to many visitors at Amistad National Recreation Area, about 10 miles northwest of Del Rio, the name conjures up intrigue and adventure. This remote, 57,292-acre park on the Texas-Mexico border boasts an enormous lake, miles of pristine shoreline, rugged terrain, and numerous, world-class prehistoric pictographs. While the National Park Service site is well known to anglers—the fishing here is legendary—it’s relatively undiscovered by other outdoor types.

“A lot of people don’t realize what we have here,” says Greg Garetz, the park’s chief of education and resource management. “Besides fishing, we’ve got excellent water-based recreation almost year round, including swimming, water-skiing, boating, and scuba diving. It’s also a great place for picnicking, hiking, and camping. When you add in the variety of plants and animals, the significant archeological sites, and the spectacular scenery, it’s really an amazing place.”

The heart of the park—the International Amistad Reservoir (or Lake Amistad, as it’s commonly known)—lies at the confluence of the Rio Grande, Devils, and Pecos rivers. Created in 1969 as a result of the construction of Amistad Dam, a joint project of the United States and Mexico, the lake varies in size with seasonal rainfall.

Noted landscape photographer Laurence Parent discovered the park about 15 years ago. “I’ve never been much of a fisherman, but I love Amistad for its dramatic scenery and great rock art,” he says. “Visually, you’ve got crystal-clear water in the Devils and Pecos river canyons, white canyon walls, and deep blue sky—a photographer’s dream. I’ve come more often in the last few years, since the water has been up. With the higher water levels, you can kayak into more areas, especially the upper canyons.”

The access wasn’t always this good. “From about 1994 to 2004, the lake levels were really low because of the drought in West Texas, and you couldn’t launch a boat on the Pecos,” says Garetz. “The drought broke in 2004, and then, last September, Tropical Storm Lowell hit Mexico, which resulted in a tremendous amount of water flowing down the Rio Grande to Amistad. The last time the lake was this full was 17 years ago, back in 1992. Today, you can easily launch from the Pecos River boat ramp, near the Highway 90 High Bridge.

“The higher lake levels have really helped park visitors in a lot of ways,” adds Garetz. “The higher water allows kayakers to get to the upper reaches of the Pecos and Devils river canyons, where there are spectacular backcountry campsites. Higher water levels mean there’s a lot more area for water-skiing, too. It even helps the scuba divers-right now the water comes right up to the steps at Scuba Cove, a protected diving cove near the Diab lo East boat ramp. It’s really a nice time for people to visit.”

The only recreational activity that hasn’t benefited from the higher water levels is fishing. “It’s still good;’ says Garetz, “but not as good as it was from 2004 to 2007. During those four years, the fishing-especially for largemouth black bass-was phenomenal!” He explains that when the lake came up 20 feet in just a few weeks last fall, the hydrilla beds used for cover by the black bass were suddenly 20 feet below the surface. “It was great for the fish, but now the fishermen have to work a little harder to locate and catch the bass;• he adds.

An avid outdoorsman, Parent says he enjoys exploring both the Devils and Pecos river canyons, but he likes the Pecos River the best. “It’s narrower and more dramatic,” he says, “and, of course, it has the two high bridges: the Pecos River High Bridge and the Southern Pacific-now Union Pacific-Railroad Bridge.”

One of his favorite sites is four miles downstream from the mouth of the Pecos—the quarter-mile-long Lower Railroad Tunnel, which was built in the 1880s and is now partially flooded with high water. “As you float through the tunnel, it’s hard to imagine that more than 100 years ago, smoky steam engines chugged through the same place, pulling long strings of cars;’ says Parent. “Today, water laps at the walls, and a few bats flit by overhead.”

While Parent relishes Amistad’s dramatic scenery, he also enjoys exploring and photographing the park’s famous pictographs. “The rockart here is some of the best anywhere;’ he says. “It’s amazing that the pictographs have lasted so long, some of them thousands of years. Now is a great time to see them; one of the most famous sites—Panther Cave—was difficult to access when the lake levels were lower!’

Difficulty is something that Parent is familiar with as a photographer. “Shooting trips are a lot of work,” he says. “To get photos at Amistad, I hike, I use a motorboat, I kayak. I start by lining up kayaker friends willing to go on a trip and be photographed. Then a photographer friend and I haul his flat-bottomed fishing boat out to the lake, where we load up camera equipment, kayaks, and kayakers.

“To get the view I want, I’ll climb giant boulders in the middle of the water and risk dropping my camera into the lake. I’ve almost fallen in myself, leaping from a boat to a rock or hanging off the bow for a different angle. On one trip, the wind was blowing hard, making it difficult for my kayaker friends to paddle and almost impossible for us [photographers] to keep our boat in position. Plus, we were all in wet swimsuits, getting chilled in the cool wind. We head out before dawn and get in after dark.”

A true professional, Parent always brings back the goods despite the difficulty, as the images on these pages attest. Thanks to his derring-do, you can enjoy Amistad National Recreation Area through his experienced lens. However, he’d be the first to encourage you to see this paradise on the border for yourself. Do it soon, while lake levels are high.