Gourmets get their fill of fungi at this annual Madisonville event 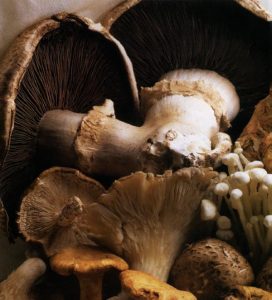 Mushrooms of many stripes add flavor and variety to a myriad of cuisines; in Madisonville, they’re the focus of a festival. Photo by J. Griffis Smith

Given the chance to experience a region’s culinary offerings, I’m always eager to pack a bag and hit the road. I’ve logged many miles to munch po-boys at the Fulton Oysterfest, savor cabrito at Brady’s World Championship Barbeque Goat Cook-Off, and sip regional varietals at the Texas Hill Country Wine & Food Festival. Hearing about a little-known event on the Lone Star food-festival circuit—the Texas Mushroom Festival—made me eager to put another notch in my gustatory belt.

For two days each October, edible fungi and Texas wines take center stage at this seven-year-old celebration hosted by the East Texas community of Madisonville. The prospect of cooking demos by local chefs, Texas wineries pouring samples from their cellars, and the guaranteed small-town atmosphere whetted my appetite for another foodie road trip.

My husband, Jeff, and I arrive early on the Friday evening of the festival, in time for the gala-dinner kickoff. As we walk across the street from our cozy room in the 1904 Woodbine Hotel, we’re drawn by the glimmering candlelight inside a large, white tent. Diners clad in everything from evening gowns to Western wear sip Spanish sparkling wine and Cranberry Mead from Purple Possum Winery of Navasota, one of the weekend’s featured Texas wines.

As twilight falls, we find our chairs at a table crowned with an arrangement of pheasant feathers, orchids, and eucalyptus and maple leaves. Gold chargers
and four wine glasses at each place setting hint at the pairing menu ahead.

In 2005, Madisonville was designated the official Mushroom Capital of Texas, and for good reason. Monterey Mushrooms, Inc., a farm just six miles south,
produces 600,000 pounds of mushrooms a week, supplying fresh white button, portabella, crimini, oyster, and other mushrooms to markets in Texas,
Colorado, Oklahoma, and Louisiana. The company is the largest mushroom producer in Texas and accounts for about 4 percent of the total United States
mushroom production.

During the dinner, four Texas wines arrive in succession, paired with the appetizer, salad, entree, and dessert. I find the Signature White from Lubbock’s Llano Estacado Winery, which accompanies the salad-a lump crab-portabella strudel over a bed of field greens—especially delightful with its fruity aroma. Its subtle pear and citrus flavors complement the creamy strudel and balance the greens’ tangy, tangerine vinaigrette.

Soon, our entrées—hearty slices of beef tenderloin—arrive. A rub of garlic and ground, dried porcini mushrooms gives the juicy beef a crunchy exterior. Generous portions of steamed asparagus and potatoes au gratin flavored with sage and sharp Gloucester cheddar share the plate. The beef is cooked perfectly—an amazing feat considering that the volunteer chefs from the Brazos Valley Chefs Association are preparing meals for 230 diners using what is essentially a field kitchen.

For dessert, we tuck into slices of caramelized banana-amaretto torte and mushroom-shaped cinnamon meringues, complemented with glasses of vanilla-tinged, tawny port from Bryan’s Messina Hof Winery. Waddling back to the Woodbine, we swear we’ll never be hungry again. Famous last words.

By late morning the next day, our growling stomachs lead us once again across the street. For the price of $10, we each pick up a souvenir festival wine
glass and five tickets for wine tastings. Ten Texas vintners representing mostly small wineries, such as Bernhardt Winery in Plantersville and Woodrose
Winery in Stonewall, unpack their libations and proceed to pour generous, Texas-sized samples. The gala tent is now ground zero for six hours of demos
featuring experienced chefs stirring, sauteing, and sushi-rolling, as well as winemakers’ presentations.

Chef Han van Joslin IV of Haiku Sushi in College Station prepares shiitaki maki featuring shiitaki mushrooms, white rice, sesame seeds, and unagi sauce, all rolled in dried seaweed and then sliced. Joslin advises the crowd on the proper technique: “Now remember, folks, don’t overstuff your sushi. It’s not like a burrito, where the more you put in it the better.”

Most of the 250 seats under the tent are taken by midday, and I soon understand why some folks arrived early to claim tables. After each of the chefs demonstrate a dish, an army of servers distributes small portions to the seated patrons.

Taking a break, we walk a block and a half to join the bulk of the crowd (about 13,000 people) perusing 100-plus arts-and- crafts booths encircling the 1970 Madison County Courthouse. My husband admires two dozen classic cars displayed adjacent to the square while I visit the Madison County Museum. There, I find an exhibit of more than 400 color and black-and-white photographs entered in the festival’s photo contest. Of course, categories include “glamour shots” of cooked, cultivated, and wild mushrooms. In one of the winning photos, the underside of a portabella fills the frame like an edible beach umbrella.

Twenty-five yards away, a line of two dozen people snakes up to a tent operated by Monterey Mushrooms, where employees hand out free portabella
mushroom fajitas and sell fresh-picked mushrooms. I stop by to take a look at a display that shows how mushrooms are cultivated, and I learn that criminis must be fewer than 45 days old when they’re harvested. If they are allowed to mature, they’ll become portabellas.

Those who’ve had their fill of fungi visit nearby vendors offering Slovacek sausage on a bun from down the road in Snook, sirloin-steak sandwiches, and salty-sweet kettle corn. Eateries on the courthouse square, including Walkers Cafe and Rancho Viejo Mexican Restaurant, provide alternatives. At the end of the afternoon, festival-goers vote on their favorite dishes. An entrée featuring chicken and creamed portabella and shiitake mushrooms served over mashed potatoes—prepared by Susan Warmuth, owner and chef of the Woodbine Hotel and Restaurant—takes top honors.

I enjoy cooking, so incorporating mushrooms into traditional dishes is not new to me. Before our trip to Madisonville, I’d slice white buttons for salads or saute criminis for my homemade spaghetti sauce. But with the many recipes I collected at the festival, I’m now ready to try out my expanded culinary
repertoire on dinner guests. Napa cabbage and wood ear mushroom salad with Asian vinaigrette, anyone?