Crossing to Safety: How Driver Attention and Innovative Design Can Help Protect Wildlife 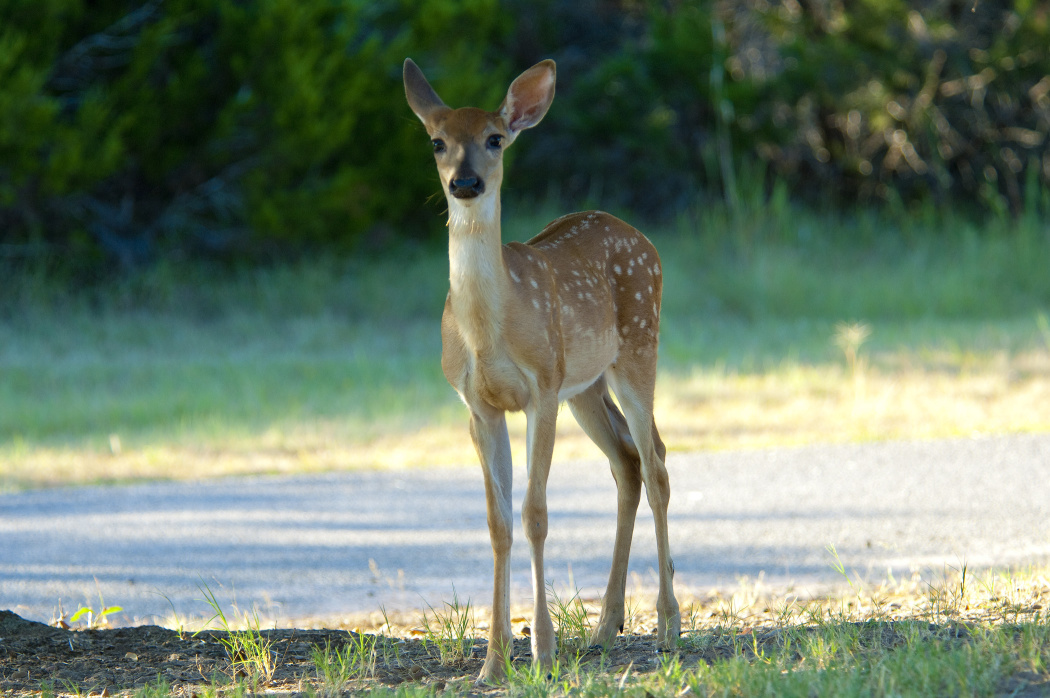 I’m out riding a motorcycle one drizzly Saturday morning in late November, tracing familiar backroads from my Austin home to Blanco and back. During my 125-mile ride, something other than bucolic scenery catches my eye. Roadkill.

The tally: a dead white-tailed deer, a mangled feral hog, a raccoon in stuffed-toy-like repose, and a gray fox lying in the road as if peacefully asleep. Cruising at highway speeds, I likely missed many smaller traffic casualties—rodents, birds, reptiles, and amphibians. On other Hill Country rides, I’ve spotted scores of dead animals, mostly deer, as well as clusters of vultures cleaning up carcasses. I’m not out searching for roadside carnage. It’s just inescapable.

Before the rise of the automobile in the early 20th century, there was no concept of “roadkill.” The term was likely coined in the late 1950s or early 1960s when Americans flocked to the expanding interstate highway system.

Iowa biologist Dayton Stoner published the first scientific study of the phenomenon, “The Toll of the Automobile,” in Science magazine in 1925. The field of road ecology emerged in the late 1990s as biologists began studying how highways fragment natural habitats and create barriers to animal movement. Rather than the term “roadkill,” road ecologists prefer “wildlife-vehicle conflict” (WVC) or “dead-on-road” (DOR) animal.

WVC numbers are incalculable. Researchers rely on systematic surveys, citizen science input, insurance claims, and police reports to estimate the scale of wildlife mortality. State Farm estimates U.S. drivers have a one in 116 chance of a collision with an animal. Drivers filed nearly 2 million animal collision insurance claims in the U.S. between mid-2019 and mid-2020. According to Federal Highway Administration data, from 1 million to 2 million large animals are killed by vehicles in the US each year. Factor in small  animals that often go unnoticed, and the annual toll scales much higher.

Texas drivers report nearly 8,000 crashes a year involving wildlife or domestic animals, and the actual number may be five to 10 higher than reported to law enforcement, according to a 2019 report by the Center for Transportation Research at the University of Texas at Austin. Approximately 20 people die each year on Texas roads in these collisions, with many more injured, and the nationwide human death toll is 10 times higher.

According to State Farm, Texas ranks fifth in the nation in deer collisions, with nearly 61,000 deer-related crashes in 2018. The swath of Hill Country from San Antonio to Austin has very high deer density, as well as the state’s highest number of reported WVCs, according to the UT report. Despite the reports, Alan Cain, Texas Parks and Wildlife Department’s white-tailed deer program leader, says, “There is no good way to capture roadkill data for white-tailed deer alone, not to mention all the other critters.”

Chris Schalk, assistant professor of forest wildlife management at Stephen F. Austin State University, compiles data to help make Texas roads safer for both humans and animals. In January 2018, he launched Roadkills of Texas, a citizen science project in which the public can document roadkills with the iNaturalist community. After registering online and downloading an iNaturalist app, participants photograph roadkills with smartphones and upload them to the project site with time and location information.

“Using these data, we’re trying to understand how roads and roadkill affect different species, where roadkill hotspots are occurring in Texas, and over what period of time,” Schalk says. “With citizen science, we have more eyes on the road documenting roadkills. Right now, the project map has more than 9,000 observations of nearly 400 species from nearly 700 contributors.”

The Texas Department of Transportation is a co-curator of the Roadkills of Texas project. Stirling Robertson, lead biologist for the department’s Environmental Affairs Division, says staff members routinely examine the iNaturalist entries to identify affected wildlife species on Texas highways. Department employees also use the iNaturalist app to document roadkills.

“With the continued development of state and national road infrastructure, we have more and more of wildlife conflicts,” Robertson says. “And with the increase in the number of highway travelers, vehicle miles driven, and the speed of their travel, WVCs are becoming an increasingly difficult problem that deserves more of our attention.”

WVC data helps highway planners identify collision “hotspots” and determine placement of warning signs and wildlife-friendly crossing structures such as culverts, bridges and fences geared to the unique behaviors of wildlife species. Such measures are a cost-effective way to mitigate the problem.

“It turns out you don’t need to do a heck of a lot to a roadway project to facilitate animal movement,” Robertson says. “We can do minor adjustments to our standard practices that really increase the value to help wildlife and decrease the safety risk for the traveling public.” 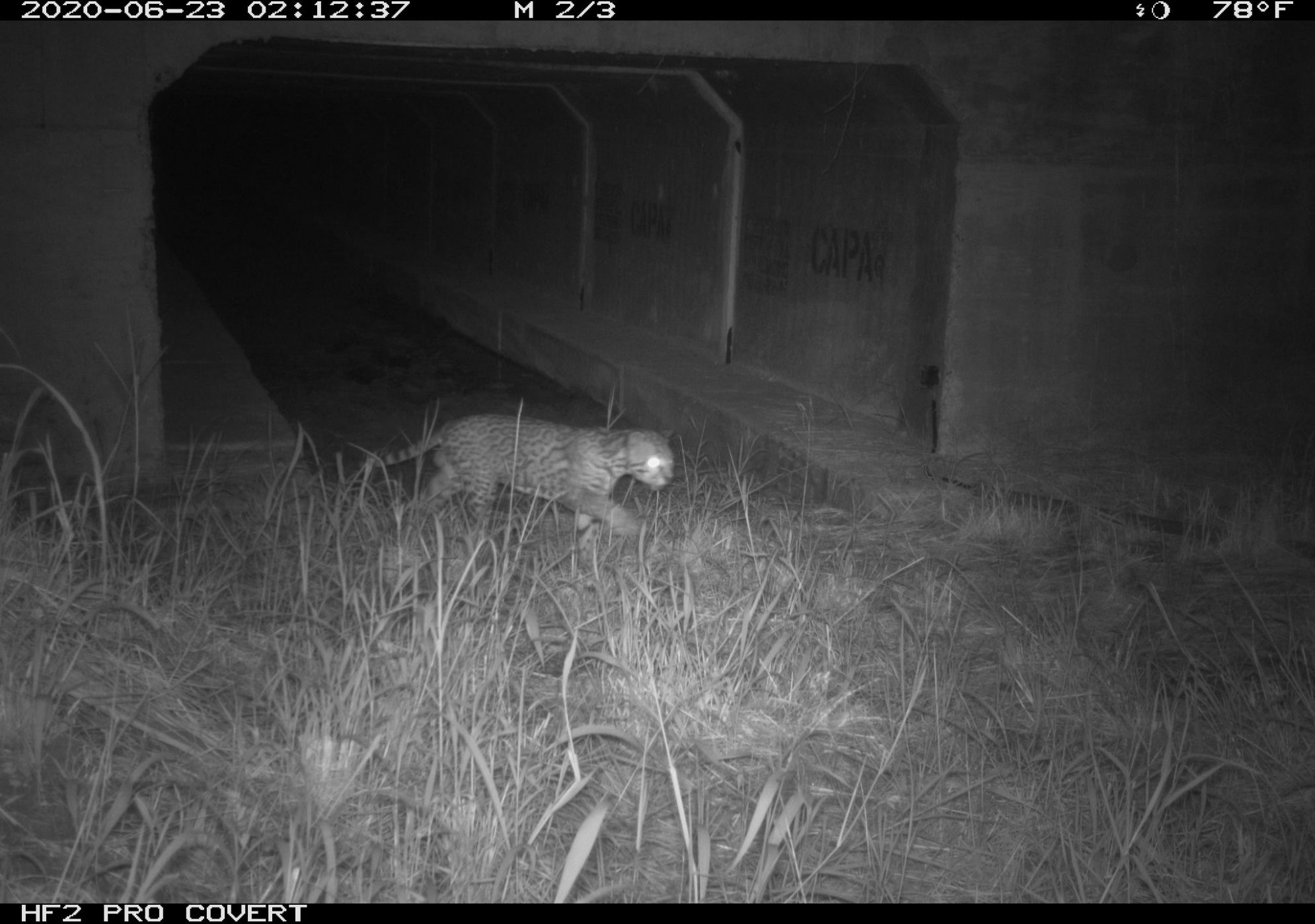 Taken in June 2020, this photo shows an ocelot using a box culvert to cross under FM 106. Photo courtesy USFWS/UTRGV

For example, TxDOT constructed wildlife underpasses on highways in the Laguna Atascosa National Wildlife Refuge in South Texas to protect ocelots, an endangered species. Nearly half of the ocelots studied around the refuge have died when hit by cars. Since the underpasses were built, cameras mounted in the culverts show that ocelots and other wildlife frequent the crossings. “For every ocelot we see, there are thousands of other animals using the crossings including more than a dozen different species such as bobcats, coyotes, armadillos, raccoons, and snakes,” Robertson says.

For years, State Highway 48 linking Port Isabel to Brownsville has been a dangerous stretch for brown pelicans, especially when winds hit the highway’s solid barriers and create turbulence that pushes pelicans into the roadway. After studying wind dynamics, TxDOT redesigned the road barriers with open spaces to ease the turbulence, reducing the pelican fallout on the highway, Robertson says.

TxDOT has also deployed dynamic message boards along SH 48 to alert drivers to wind conditions that cause pelicans to crash onto the highway. Robertson says dynamic messaging systems are more effective than static wildlife crossing signs, especially once drivers become habituated to the signs. 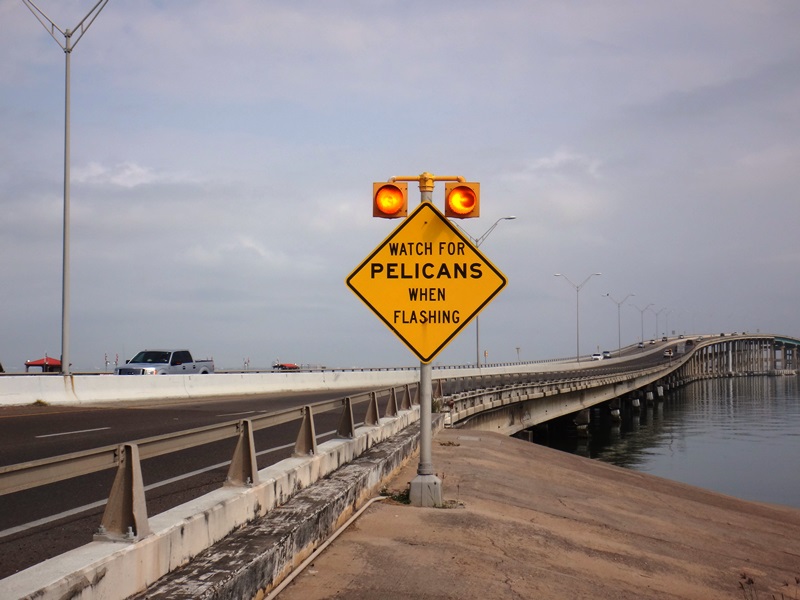 A pelican warning sign on State Highway 48. Photo by TxDOT

Another innovative yet low-tech measure to minimize nighttime deer collisions is a rear-facing light bar mounted on the front of a vehicle. Illuminating the grill area presents a more visible looming object, reducing the “frozen in the headlights” behavior of deer. Researchers report the use of light bars reduces the likelihood of hitting a deer from 35 percent to 10 percent.

Among the most effective roadkill mitigation measures in the highway engineer’s toolbox are wildlife land bridges, but they are also the most expensive. In Banff National Park in Canada, six land bridges, 38 underpasses, and roadside fencing have reduced wildlife mortality by more than 80 percent, according to the Canadian government.

Bridges, overpasses, culverts and other highway infrastructure can also provide habitat for wildlife. Cliff swallows, for example, build elaborate mud nest colonies under bridges. At least a dozen bat species in Texas roost and shelter beneath bridges and culverts. Rodents and other small animals often thrive in highway verges. Native grasses and wildflowers planted along roadways provide habitat and sustenance for wildlife and insects.

“We often talk about the detrimental impacts of highways, but it doesn’t have to be detrimental,” Robertson says. “Think about how we can make our highway infrastructure even better so that it can coexist with wildlife populations.”

There’s one kind of animal that signage and crossings seem unable to help: insects. Consider the plight of the Texas state insect, the monarch butterfly. Millions of monarchs die each autumn in collisions with vehicles while fluttering across Texas highways en route to their mountain sanctuaries in Mexico. Interstate 10 from Junction to Sheffield is especially hazardous for low-flying monarchs during peak fall migration season, according to researchers at Texas A&M University. Monarch numbers have declined so steeply—more than 80 percent over the past quarter century—the butterfly is now considered a candidate for the endangered species list. While the causes of this rapid decline are manifold, highway mortality is a contributing factor. Texas A&M and TxDOT researchers are collaborating on a multi-year research project to assess the extent of monarch roadkill on Texas highways and propose mitigation strategies to help protect this iconic species. 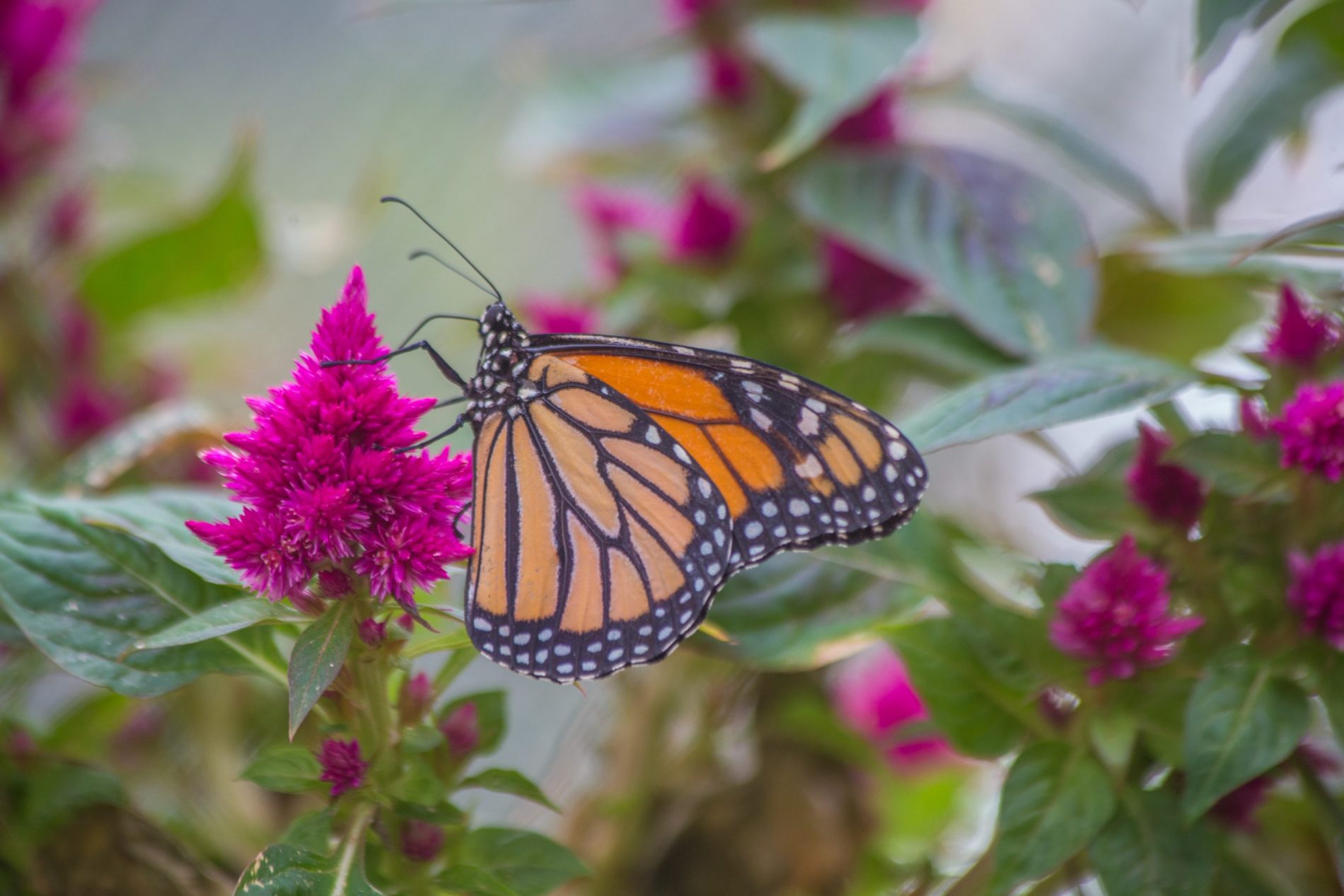 A monarch butterfly. Photo by Will van Overbeek, TxDOT.

What might happen to wildlife if traffic came to a halt? This unplanned experiment occurred last spring during the initial surge of the COVID-19 pandemic when much of the nation shut down. This brief respite in human activity, dubbed the “anthropause,” resulted in dramatic reductions in wildlife-vehicle collisions, according to researchers at the University of California at Davis Road Ecology Center. But traffic levels have since returned back to near-normal nationwide, and the reprieve is over.

“It’s important to recognize that roads and cars aren’t going anywhere, but we need to develop mitigation measures that are integrated into road planning,” Schalk says. “That’s where the field is going, recognizing the need to integrate mitigation through informed science.”

Adding more culverts, land bridges and dynamic signage is only part of the solution. The rest is up to us as drivers. “People have a responsibility to be good motorists,” Cain says. “We can’t avoid every accident, but if people are vigilant and observant, they will be aware of wildlife crossing areas on the road. Pay attention. It’s a simple concept.”

Years ago, driving in remote southwest Texas, I mindlessly rolled over a long stick in the road. What was that? In my rearview mirror, I saw a large dark snake, likely a Texas indigo, writhing in the road behind me, a goner. My regret still lingers. Why didn’t I stop? Why didn’t I pay attention?

In his essay, Apologia, the late writer Barry Lopez recounts how he reverently moves dead animals from the road: “I carry each one away from the tarmac and into a cover of brush or grass out of decency, I think. And worry. Who are these animals, their lights gone out? What journeys have fallen apart here?”

Heeding Lopez’s requiem, I pay attention on my journeys and pause for wildlife along the way.