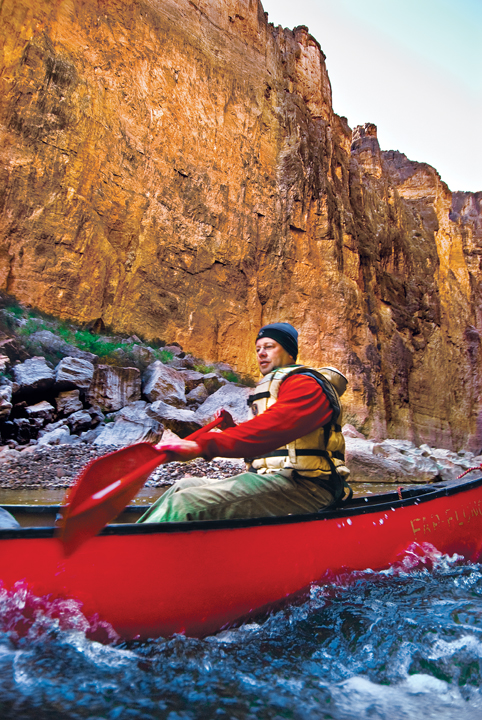 Maybe it’s the exhilarating sense of isolation, or the feeling that you’ve fallen off the edge of the earth into another world. But floating the big canyons of the Big Bend by raft, canoe, or kayak is an experience like none other in Texas or the world beyond. Some folks take to the Rockies or New York or somewhere overseas for vacation. I prefer the exotic charms of a trip on the Rio Grande in the Big Bend any day.

Extreme southwest Texas looks like nowhere else: a pure desert and mountains landscape with uninterrupted vistas and a sprawling sky overhead. Each deep gorge —Santa Elena, Mariscal, and Boquillas canyons inside Big Bend National Park, Colorado Canyon upstream, and the Lower Canyons below the park—exudes the kind of majesty the Texas myth was built upon. Only in this case, these are the real deal, towering like skyscrapers as much as 1,500 feet above the river, rendering insignificant those few humans floating through. It’s a setting as surreal as any dreamscape.

No matter what kind of expedition you embark on, just remember: Once you’re on the Rio Grande, there’s no turning back, because you’ve left the rest of the world behind.

People like you and me have had the chance to enjoy the extreme beauty of this most unusual place ever since the company then known as Far Flung Adventures started organizing Big Bend river excursions in the early 1970s. Since then, whenever the Rio Grande is flowing (which isn’t always a given), river outfitters have been guiding visitors into the canyons for short day trips and overnighters, as well as longer expeditions that can last for days and weeks.

Some trips are rudimentary, straight-up river runs with no more than a boat, paddles, life vests, and a guide. Other trips are full-immersion experiences where you can enjoy gourmet meals, lectures, seminars on photography, geology, astronomy, and writing, or with singer-songwriters or classical chamber groups providing the entertainment. On some deluxe trips, you don’t have to pick up a paddle or pack up a tent unless you want to.

No matter what kind of expedition you embark on, just remember: Once you’re on the Rio Grande, there’s no turning back, because you’ve left the rest of the world behind. Cell phone service and roadside assistance are nonexistent. The nearest hospital is 100 miles north, and it’s more than a day’s hike to a convenience store. In exchange for such remoteness, you’re reward-ed with constantly changing scenery that few others have been privileged to see as your boat floats between sheer walls rising above the water.

Around every bend, the senses intensify. Revelations are served up on an abstract palette with otherworldly visuals emerging from water, rock, and sky. On a clear night, the starlight can be so bright you can see in the dark. Smells be-come sharper in the Big Bend’s canyons, especially around whitewater rapids, where rushing water churns into froth. When it rains, wet creosote in the surrounding Chihuahuan Desert emits an aromatic scent that seduces the nostrils like perfume. Absolute silence is broken only by voices, the sounds of water flowing and wind blowing, the steady stroke of a paddle, the distinctive descending trill of canyon wrens and the occasional screech of a hawk, your breathing, and your heartbeat. When you shout, your voice echoes three or four times, bouncing off distant rock walls.

The daily ritual emphasizes relaxing recreation and fun: Pancakes, eggs, and hot coffee or hot chocolate for breakfast, breaking camp, paddling, the careful scouting of rapids and the adrenaline rush of running them, stopping for sandwiches and drinks for lunch, some more paddling and trail-exploring in the afternoon, making camp, enjoying Dutch-oven delicacies for dinner accompanied by stories told by river guides (who are a breed unto them-selves), casual conversations between river trippers, and personal revelations. Every moment is a Kodak moment, even when the winds kick up and the dust blows.

I’ve had the pleasure of doing all five canyons in and around Big Bend National Park, from half-day power paddles to more leisurely week-long passages with time to hike into side canyons and soak in hot springs. Every trip remains vivid in my mind. Camp on the left side of the river going downstream and you’re in Texas. On the right side of the river, you would be in Mexico. Note the absence of humanity, including no air traffic overhead.

Granted, some Big Bend river trip memories include not-so-pleasant moments, because river trips are unpredictable. Like the time we almost made it into Santa Elena Canyon before the heavens rained thunder and lightning upon us, forcing us to move our tents to higher ground twice in the dark (the upside was peeking out of the tent to see waterfalls gushing out of every pouroff along the rim whenever the sky lit up). The next day, my son and I tumped our inflatable kayak as we entered the canyon, forcing us to swim to safety. It was almost an hour before our party of nine fetched the boat downstream. When we reached Rockslide, the one dangerous rapid in the canyon, our group lost another boat, and we spent another two hours retrieving it. Both efforts required the kind of teamwork and coordination that brought out the best in our group. The skies cleared and we camped on a grassy vega by the river, watched Mexican free-tailed bats flitter about in the gathering dusk, enjoyed a warm meal by campfire, and went to sleep watching satellites and meteors.
My son and I still talk about that trip, and smile as we recount even the more perilous parts of our adventure.

Someday, I hope to budget a month or so and do the whole 250-river-mile run from Colorado Canyon upstream of Lajitas to the Lower Canyon takeout near Dryden, as one man in a canoe told me he was doing when we met in Lajitas a few years back. Whether or not I take that on is almost beside the point. All I know is I’m way overdue for a Big Bend river trip. I get that feeling whenever the last trip ends. River running on the Rio Grande is a restorative I didn’t know I needed until the first time I did it. Now I can’t live without.