The coffee table book, a joint project between a photographer and poet, also honors the city's history and Mexican-American heritage 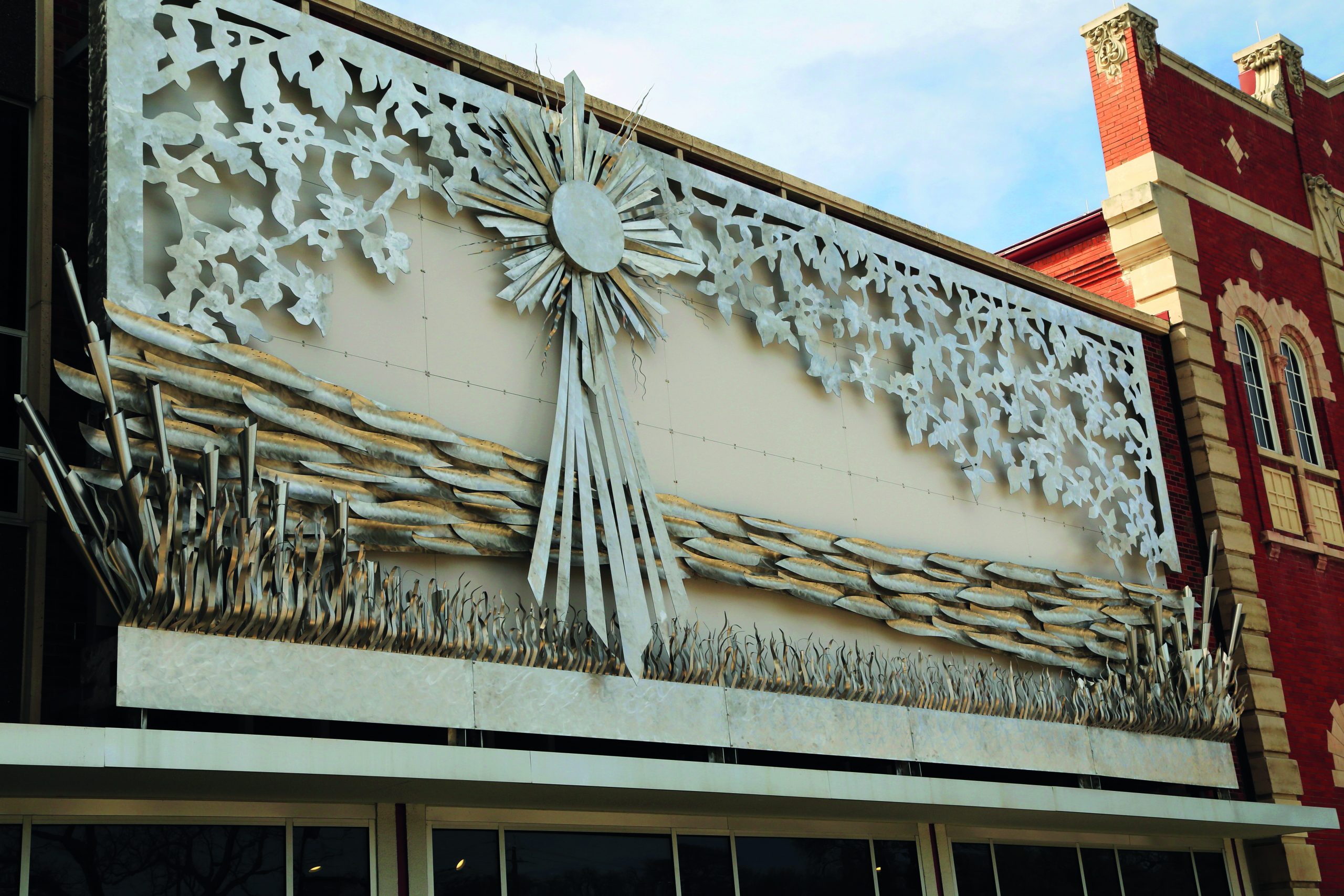 ‘Source of Life’ by Cakky Brawley is located at the University of the Incarnate Word. Photo by Frederick R. Preston from ‘Arte Del Pueblo,’ courtesy Schiffer Publishing.

There is so much public art throughout the state, it can be challenging to keep track of all of the different pieces: Marfa’s Prada Store, Houston’s Cloud Column, Austin’s I Love You So Much wall, and countless more. Texan and visiting artists are constantly trying to leave their mark on the land and cityscapes around them. And no city is more encouraging and welcoming of public art than San Antonio.

The Alamo City was an early proponent of public art, creating a Department of Arts and Culture as a reaction to the many murals and graffiti that were already decorating public spaces as early as the 1970s. Today the organization manages two free art galleries—Centro de Artes and Culture Commons—on top of providing grants and funding for independent artists and groups of artists.

Because of the abundance and ephemeral nature of art left to weather outdoor conditions, Carmen Tafolla, a poet and native San Antonian, and Frederick R. Preston, a photographer and Texas transplant, decided to give them a permanent home in a book. Arte Del Pueblo: The Outdoor Public Art of San Antonio (out now by Schiffer Publishing) both commemorates and contributes to the already robust art scene in the city.

Preston, who grew up on the East Coast but has been living in San Antonio for almost 20 years, was initially drawn to the city because of its richness of life. The people, architecture, cultures, and languages all came together in a way that left an impact on him, and it became something he wanted to share with others. “I wanted to [make] a book that not only gave a pictorial display of the art, but also captured the sense of warmth, love, and depth of spirit that I felt in San Antonio,” he says.

Preston spent three years hunting down new art pieces to photograph, meeting with artists and museums, and finding a writer who could elevate the photos he was taking. Tafolla, who was San Antonio’s first poet laureate from 2012-14 and State Poet Laureate in 2015-16, was a perfect match for the book project.

Tafolla saw the project as an opportunity to continue elevating her culture and those around her. “My family has been here since before it was called San Antonio,” she says. “We have Indigenous roots and some roots from the first mestizo soldiers that came to establish the presidio.”

Preston and Tafolla shared a common goal for the book: to uplift and honor the Mexican and Mexican-American culture that flows through the art in San Antonio. “We are a city with a heavy Latinx majority,” Tafolla says. “Muralism was an expression of social justice, of equity for lower income people.” Throughout the book, she weaves in muralism’s ties with Mexican culture and revolution, allowing readers to see the many ways Mexican-American culture influences art produced in San Antonio.

“Like the muralismo of the Mexican Revolution (for which San Antonio served as capital in exile), accessibility to all is crucial to an art that belongs to the pueblo,” Tafolla writes. “That this art is accessible to everyone at no cost is a stride for social and economic justice. And it holds the potential to impact the entire community.”

In the 208-page coffee table book, which weighs 3 pounds, Preston’s photos include everyday people strolling past or engaging with the art, adding a whole new dimension to the art of documenting art. Tafolla’s words push readers to think beyond the surface of the art and deeper into its roots and branches. Together, the two artists were able to create a creative collage and record of San Antonio’s public art, which otherwise may have been lost to the whims of time and change. As Tafolla writes in the book:

“But el arte del pueblo,
the art that is for the public and of the public,
owned by la gente and singing its daily song,
is unbound, unlimited, and glows with
the rhythm of our lives.”

Here are some of Frederick Preston and Carmen Tafolla’s must-see public art pieces around San Antonio: 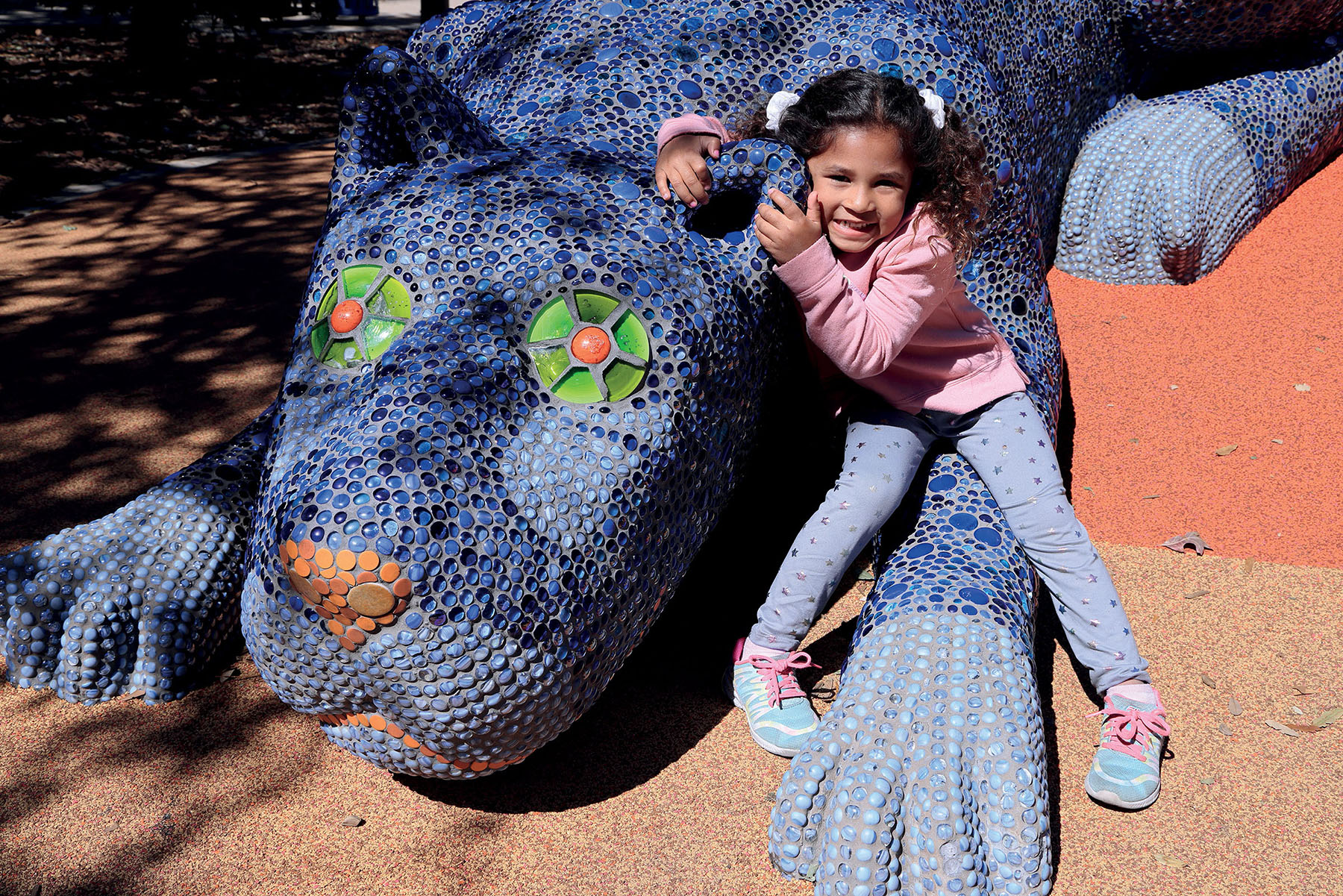 This mosaic statue of a blue panther is more than just what meets the eye. The blue panther is a symbol of the power of the water that created the Yanaguana (now San Antonio) River. Both artists value and appreciate both its beauty, but also its functionality; visitors are free to climb, sit on, and interact with the piece as they like. 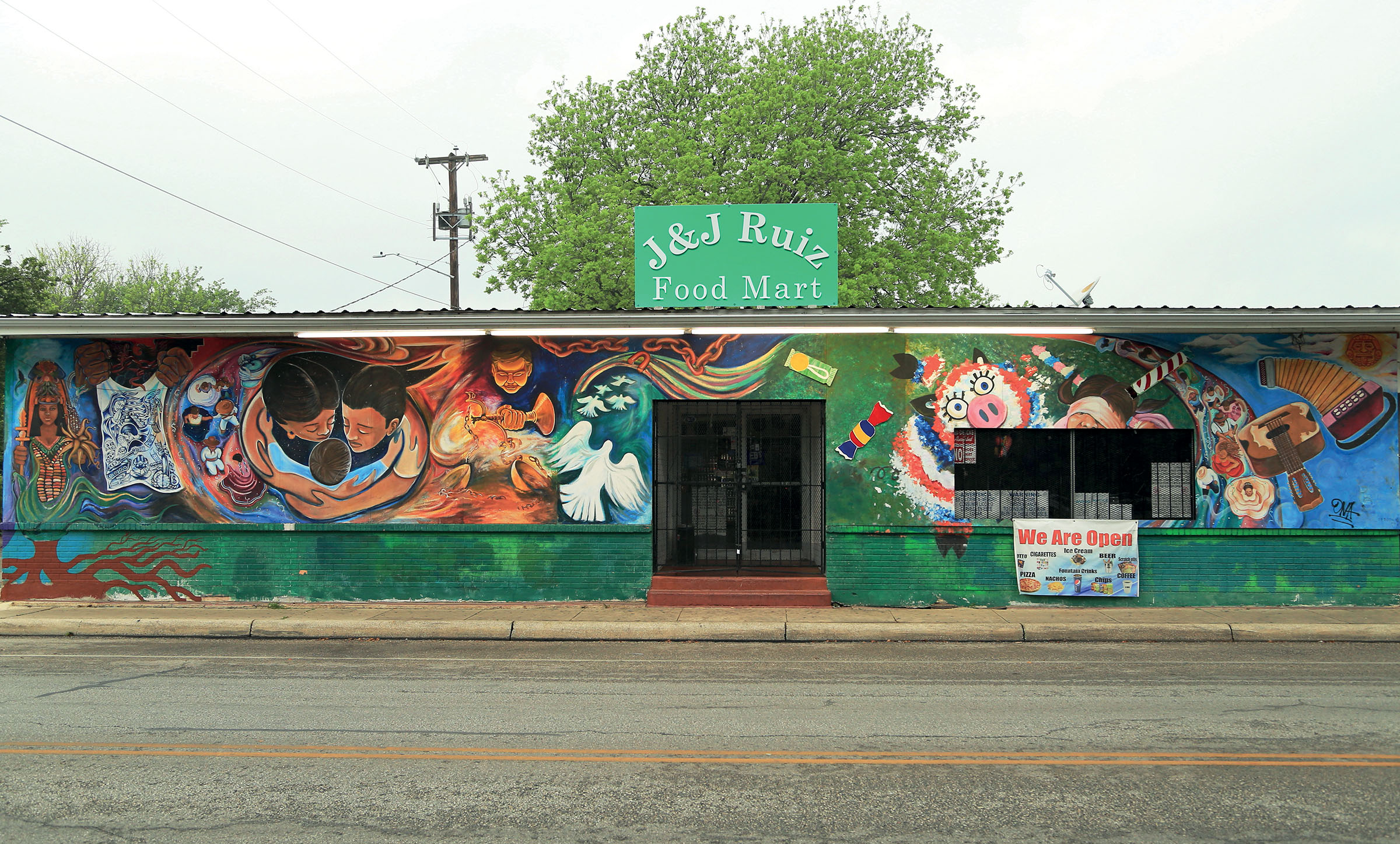 Painted onto the facade of a small corner store, this piece draws from more than just local legends and stories. The mural is a tribute to the Aztec goddess of corn, but also to the essence of survival as a family—as is shown by the depictions of a family and community. 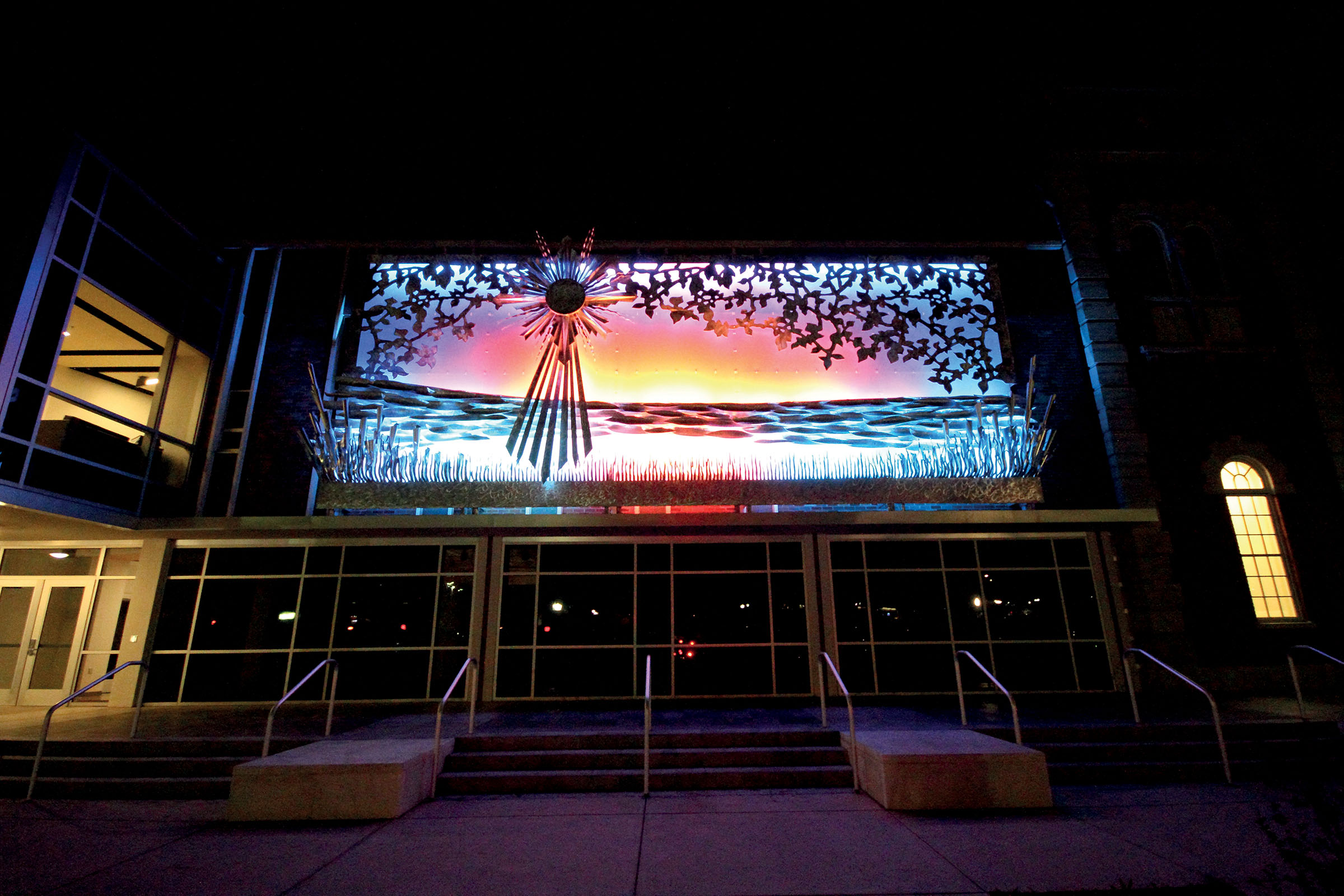 Source of Life by Cakky Brawley

The University of the Incarnate Word

This piece is one of Preston’s favorites, and must be seen at night; when the sun goes down, the piece is illuminated from behind with an array of gorgeous colors, giving the sculpture an entirely different life than the one it has during the day. 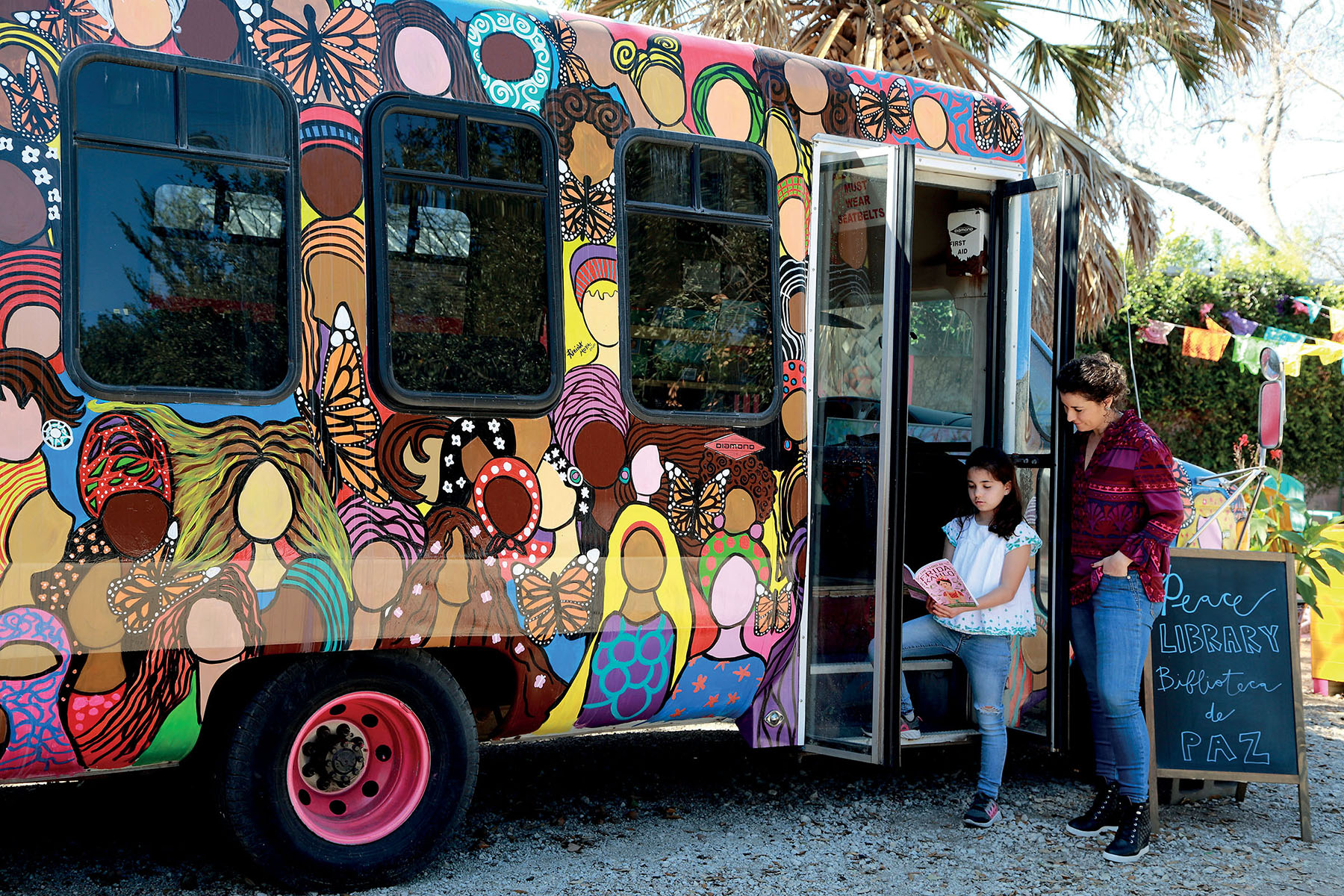 What once was a school bus is now both an interactive art piece, as well as a public learning center. Moya covered the outside of the bus with faceless figures decorated in fun, bold patterns; and on the inside, is a free community library. Visitors are encouraged to leave and take books. 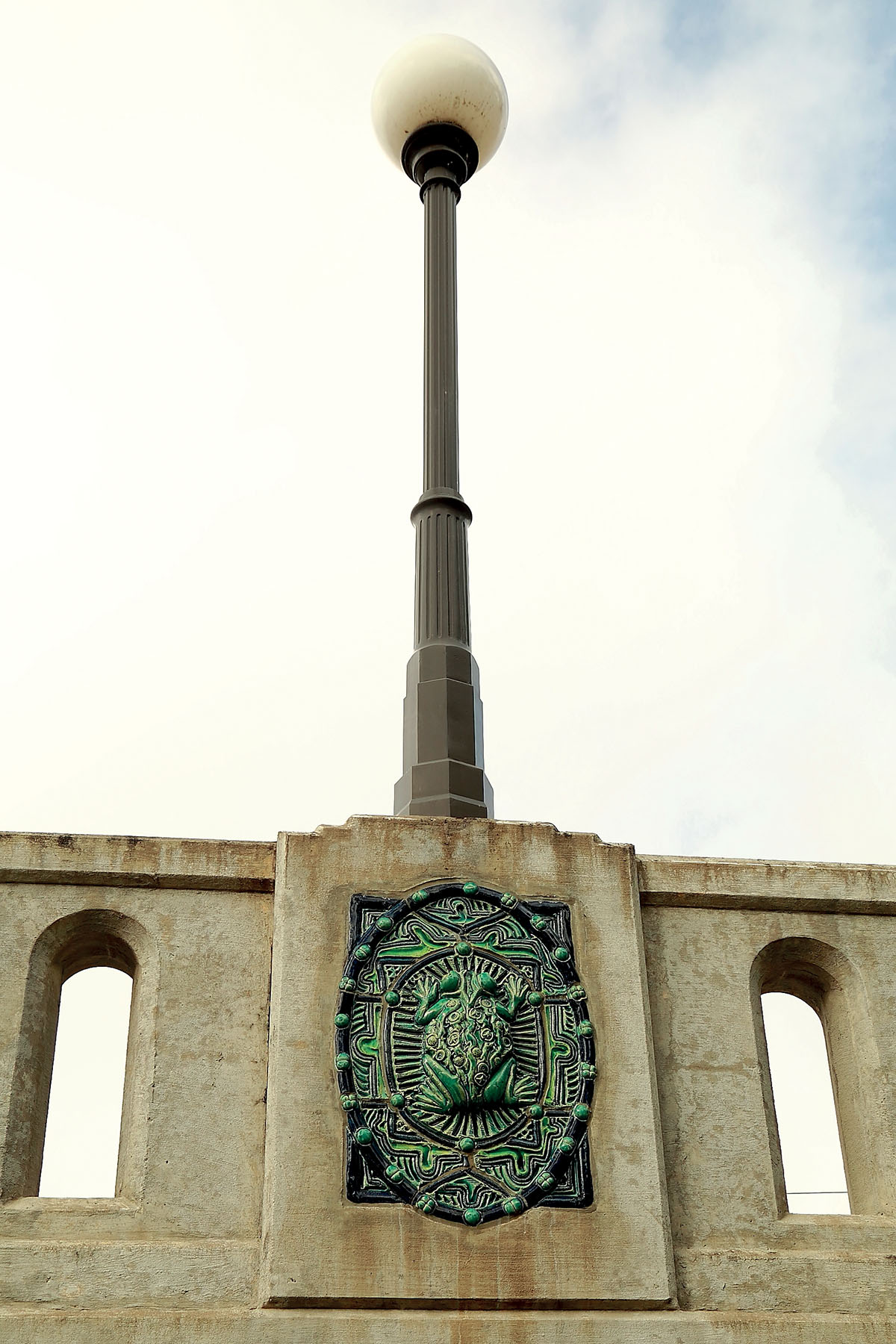 Life Cycle of the Gulf Coast Toad by Diana Kersey

This piece can be easy to miss, but it’s worth scoping out. The ceramic tile is almost like a photograph of the river below, and the green colors and wave effect of the tile make it feel like you’re peeking into the life of a frog, start to finish.