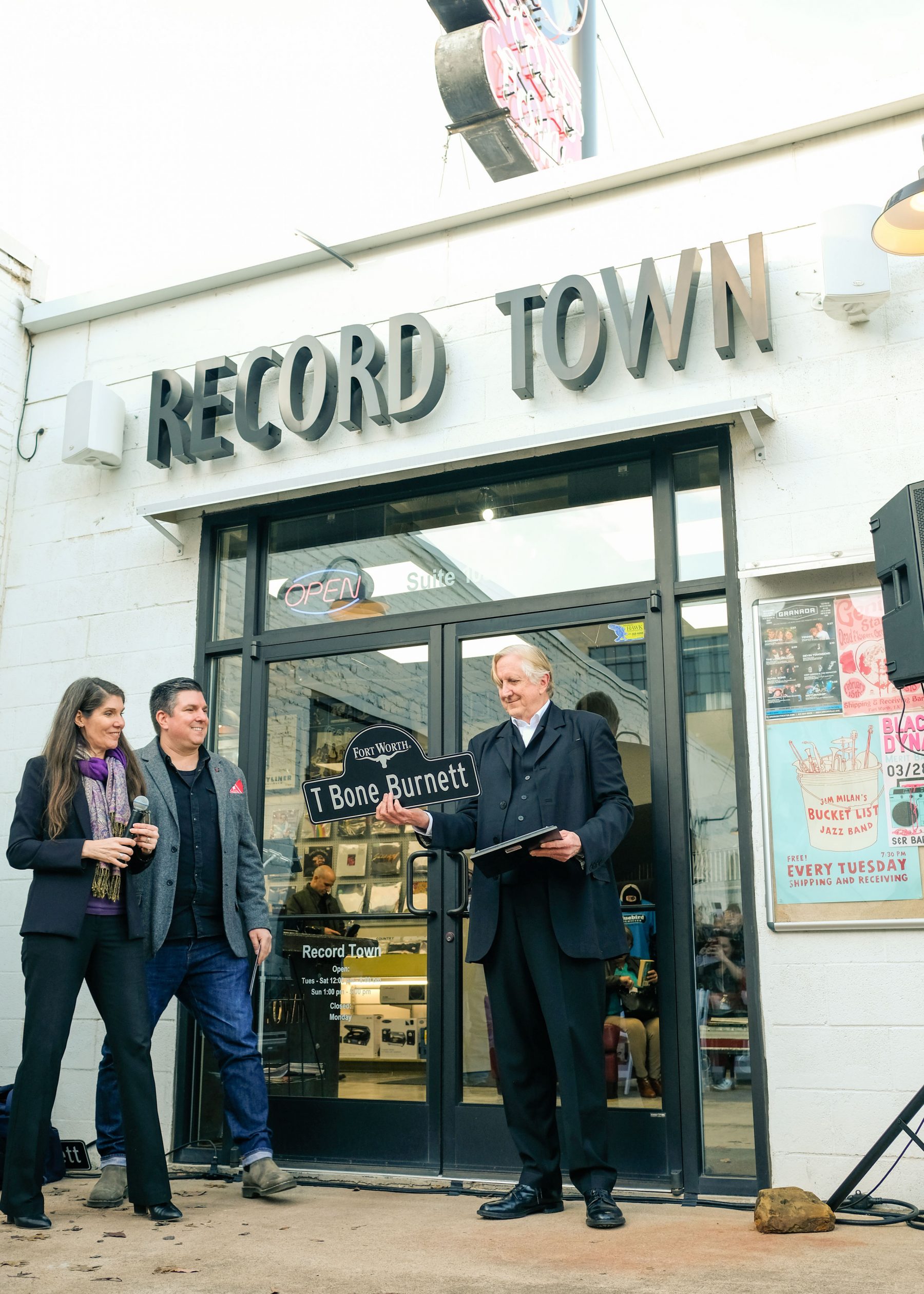 T Bone Burnett’s musical education began at Record Town, a shop owned by the father of Stephen Bruton, a childhood friend who worked with T Bone on the soundtrack to the movie Crazy Heart.

Famed musician and producer T Bone Burnett has won 13 Grammys and an Oscar, but there’s nothing like being honored in the city that raised you. “Fort Worth is a golf town and Fort Worth is a music town: Let’s go play!” the towering 72-year-old icon said Thursday at a ceremony unveiling “T Bone Burnett Boulevard” in his hometown.

The commemorative street signs reside on St. Louis Avenue, on the block fronting the new Near Southside location of Record Town, the shop where a 12-year-old T Bone first heard the songs he would later use in the multi-million-selling soundtrack to the Coen Brothers film O Brother, Where Art Thou? The renaming ceremony, which coincided with Burnett’s keynote speech to the Visit Fort Worth annual breakfast meeting, featured brief speeches by Robert Sturns, the city’s economic development director, and Ann Zadeh, a member of the city council. But since the honoree is still living—Fort Worth officially renames streets only after the deceased—the designation is strictly for show. Punching “T Bone Burnett Boulevard” on the GPS yields “no results found.”

Burnett is an avid golfer who has become the Ben Hogan of the studio. He has produced the debut albums of Los Lobos, Counting Crows, and Gillian Welch, as well as the Grammy-hauling Raising Sand collaboration between Alison Krauss and Robert Plant in 2007, not to mention the music in several Coen Brothers films. And like Hogan, the links legend, Burnett learned to swing in Cowtown.

In a short post-proclamation speech, Burnett, who has lived in Los Angeles since the early ’70s, expressed giddiness with the strides Fort Worth has made in recent years recognizing its homegrown talent. This includes guitarist Stephen Bruton, whose father opened Record Town in 1957 across the street from Texas Christian University. Bruton’s final project before he succumbed to cancer in 2009 was working with childhood friend Burnett on the soundtrack of the Academy Award-winning movie Crazy Heart. 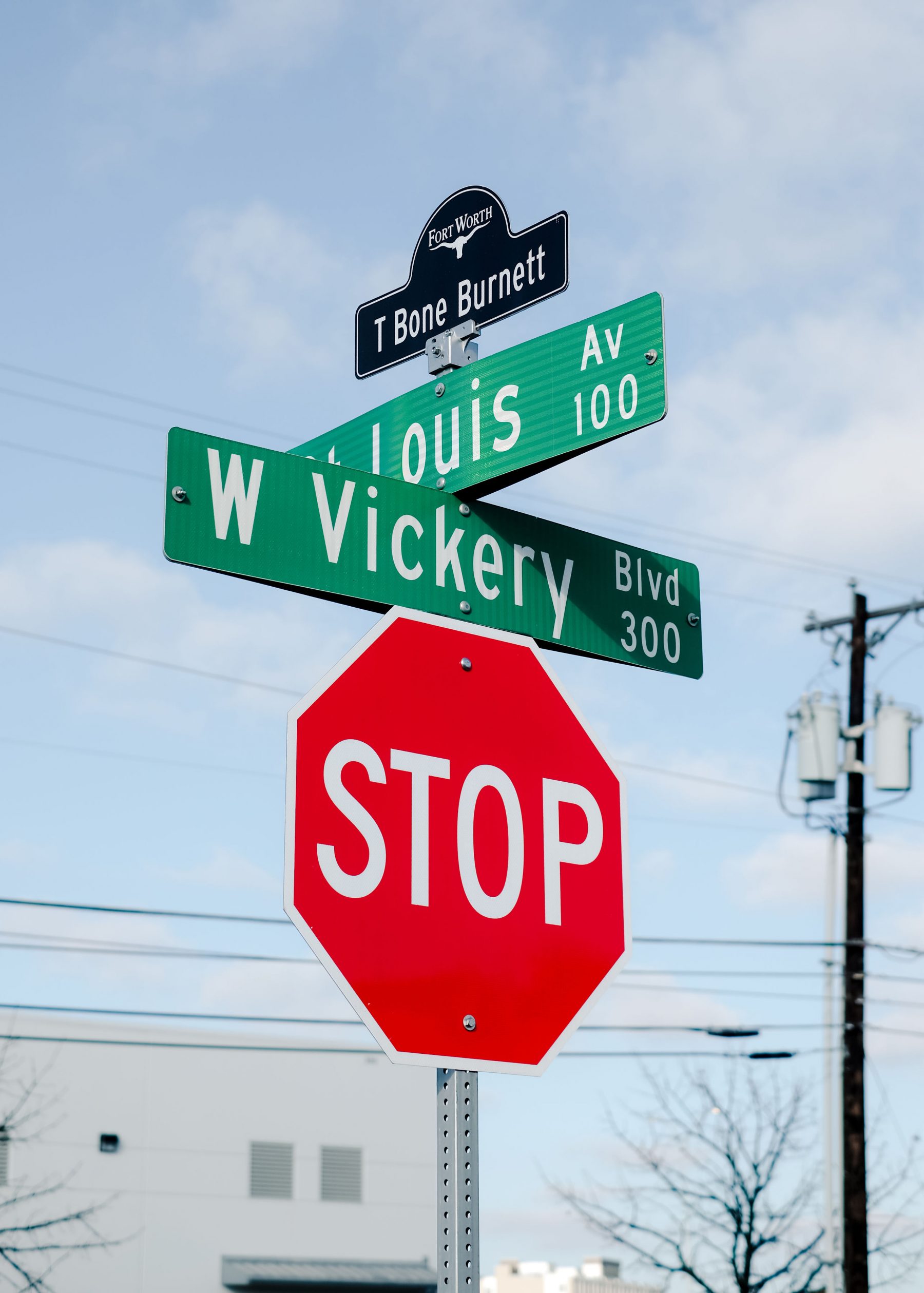 Burnett, a graduate of Paschal High School, has long touted Fort Worth’s music history, but last week’s focus was on his hometown’s potential.  “If you told anyone in New York City 20 years ago that Tribeca would be the hottest neighborhood, they would’ve laughed in your face,” Burnett said Thursday. “But it’s the artists who went in there and fixed it up and created this enormous economic engine. And I see the same thing starting to happen in Fort Worth.”

Brendon Anthony of the Texas Music Office lauded Fort Worth as “the shining example of a city that values, validates, and supports the creative class.” The city’s Hear Fort Worth live music advocacy program was represented by creative director Tom Martens, whose organization has promoted the rise of nouveau R&B singer Leon Bridges, and was instrumental in bringing Burnett back home for the festivities.

Joseph Henry “T Bone” Burnett III was born in St. Louis—coincidentally, the name of the avenue that shares his street sign—but he moved as a youngster to Fort Worth. There, he was called T Bone for his love of the blues. “We became fast friends with T Bone,” said Sumter Bruton III, Stephen’s brother and former Record Town owner, “because his house was the only one in the [Arlington Heights] neighborhood that had a swimming pool.” But music is what strengthened the bond.

Asked what Record Town meant to his career in music, Burnett said, “Everything.” When he was coming of age in the ’60s, only record stores could order music. “They had a big catalog on the counter and Stephen and I would spend hours going over everything that was available. We’d order Dock Boggs and the Stanley Brothers and Blind Willie Johnson. That was the first time I’d ever heard ‘O Death’ and ‘Rank Stranger’ and ‘Dark Was the Night,’” he said of songs that he used in the films O Brother, Where Art Thou? and Walk the Line. Another Record Town discovery was Nina Simone’s version of “I Got It Bad (and That Ain’t Good),” which he used in The Big Lebowski.

At night, teenagers Burnett, Bruton, and their friend Delbert McClinton would sneak into clubs on Jacksboro Highway to see the nascent bluesmen and honky-tonkers whose records they adored. It was quite a musical education. “It may not seem like much to most people on the outside but, to us, Fort Worth was a magical place growing up,” Burnett said.