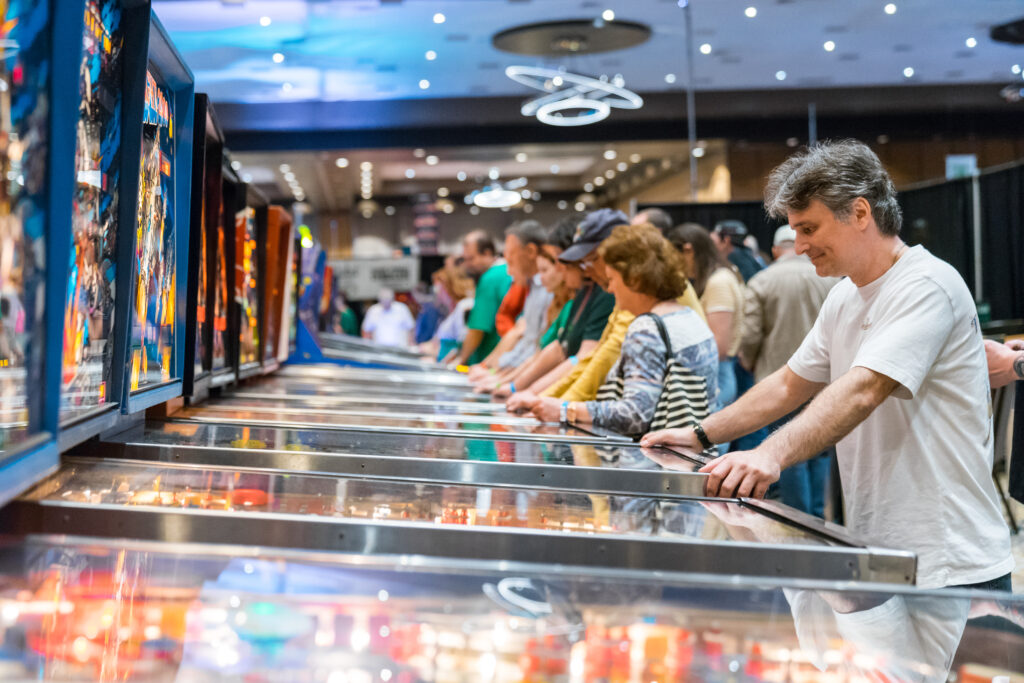 Back in 2001, pinball was in one of its periodic downturns. New machines had dwindled almost to zero and there was only one manufacturer left on the planet. Between video games, the internet, and other modern pursuits, people had just found other things to do.

That was when Paul McKinney and eight of his friends in the Dallas-Fort Worth area hosted Pinarama, the very first iteration of today’s Texas Pinball Festival. McKinney, who now organizes the event with the husband-and-wife team of Ed and Kim VanderVeen, says the first version attracted only hardcore collectors and hobbyists, but within two years, they needed a hotel and conference center to accommodate attendees, many of whom came only to play. It kept growing and growing, and today it’s something like the South by Southwest of global pinball and vintage arcade games, requiring a partnership with a hotel equipped with a 40,000-square-foot “game room” (normally referred to as its convention center.)

“Our goal was to save pinball,” McKinney says. “We all got together, and now shockingly it’s grown to the point where it’s the largest [pinball convention] in the world.”

While McKinney acknowledges that the primary attraction to most attendees is the games themselves, he’s prouder of the auxiliary functions his gathering has enabled. Maybe they did save pinball, or maybe not; certainly, they’ve reinvigorated it.

“I really feel like our show has directly contributed to a revival of pinball,” he says. “Quite a few manufacturers got their first exposure at our show.”

One of those he is most excited about is Multimorphic, out of Round Rock.

“They make a very unique cabinet—you can swap out playfields,” McKinney says. “So if you have limited space, you can still have multiple pinball games.” In other words, like multipurpose stadiums that can be configured to host baseball, football, basketball, and track, Multimorphic offers many games on one machine. When you tire of launching pinballs through one set of bumpers, ramps, and other obstacles, you can unplug and replace the entire playing field in 60 seconds, per a claim on the company’s website.

This year the company will be debuting its own Weird Al’s Museum of Natural Hilarity at the conference.

The Texas Pinball Festival is truly a global event now, with manufacturers and developers coming in from Australia and Europe and coast to coast. Just like the early days of SXSW, this conference is where the deals are made and the course for the trends in the industry are set. And just like SXSW, it is both an industry gathering and a fan happening, which brings us back to the games themselves.

This year’s convention center floor will be lined with roughly 440 pinball machines from every era of the game’s history, ranging from flipper-less antique 1930s models to the latest and greatest machines made by the hottest manufacturers. Reading the names of the machines is a fun little wallow in nostalgia for this 50-something: 1970s games like Evel Knievel, Sinbad, the ice hockey-themed Bobby Orr Power Play, and the Elton John Captain Fantastic-themed game will all be on the floor.

Sir Elton’s is one of several with a rock and roll theme. Others allow you to plunge and flip to the likes of Rush (somehow seems such a natural fit, right?), KISS, Guns N’ Roses, AC/DC, Alice Cooper, and the Rolling Stones. Even more machines have been themed to TV and film, and so you have a Star Wars machine and another built around The Mandalorian; various Star Trek and Batman machines; The Simpsons and Stranger Things; Spinal Tap and The Addams Family, to name a few.

Some games, McKinney points out matter-of-factly, might not exist were it not for his show, and others, like the line put out by Haggis Pinball from Australia, will be making its American debut at the show.

“So, I really do think there’s been a resurgence,” McKinney says. “When we started out, it was maybe 60 machines and 400 people. Now we have well over 400 machines and probably 5,000 attendees over the weekend. And there’s been a big change in the demographics. Frankly, at first, it was pretty much all middle-aged white guys. Now we’ve got a good mix of women and children and a whole lot of 20-somethings.”

For those in the trade or anyone who might want to join in, there will be a full slate of talks from luminaries in the design and manufacturing world. There will also be a swap meet for spare parts and old machines held in the parking lot on the grounds.

Contestants, ranging from pro to rank amateurs hoping for a hot streak, can compete on the machines for cash prizes in a variety of tournament tiers, from accredited professional down to a kids’ bracket.

Or you can just play for fun, either on the pinball machines or try your luck at Space Invaders, Centipede, Galaga, Joust, Mario Brothers, and Atari’s X’s and O’s Football, or dozens of other vintage console games at the adjacent arcade. No quarters needed—the price of admission takes care of that.