Roadside Oddity: The Return of Alley Oop Day and Fantasy Land in Iraan 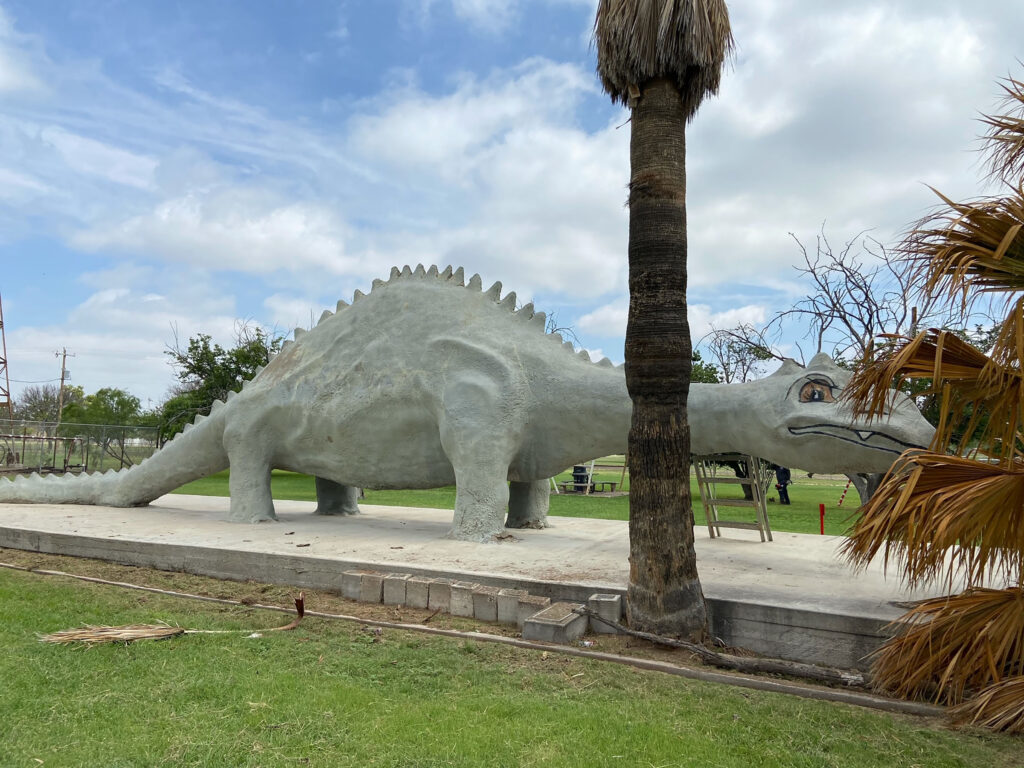 Back in the spring of 1964, West Texans in towns like Iraan were in something of an existential crisis. Agriculture and petroleum, the lifebloods of their economy, were on the wane. Iraan, situated about 80 miles south of Odessa, would have to get creative and cash in on one of the top industries in America’s economy.

“Tourism is the third largest money-making industry in this country, and you’d better get your town in shape if you want a part of this dollar,” advised George Jordon, head of the West Texas Chamber of Commerce. As reported by the Odessa American at the time, Jordon went on to cite the success of attractions like Six Flags and Happy Shahan’s Alamo Village in Brackettville, then the two biggest draws in the state.

“But just because you don’t have a Six Flags or a state park, don’t you think for a minute Iraan doesn’t have something to offer visitors,” Jordon continued. “Dream big.”

It just so happened the community was hard at work on something that would set it apart. On May 8, 1964, the city held its first Alley Oop Day, a celebration of the wildly popular comic strip about a time-traveling caveman created by Vincent Trout (V.T.) Hamlin. The slate of events included a barbecue, beauty pageant, and live music.

This Saturday, for the first time in more than a decade, the Alley Oop Festival will be resurrected in the town’s city park, named Alley Oop Fantasy Land, located on Alley Oop Lane. The daylong party features a 5K run, cornhole, bingo, a 3-on-3 basketball tourney, a barbecue cookoff, a Mr. Oop and Miss Oola beauty pageant, and a concert and dancing to the sounds of headliner Clete Bradley and the Mood and opener Ken Baucham.

As in year’s past, the festival’s centerpiece is the 65-foot-long statue of Dinny, Alley Oop’s friendly brontosaurus-like steed. Dinny was unveiled at the dedication ceremony of the Alley Oop Fantasy Land in 1965. A local teasingly told an Odessa reporter that the dinosaur’s size would make it larger than Odessa’s giant jackrabbit. Best of all, Hamlin appeared in person.

Today, Iraan town leaders are hoping his ghost can return. And Andrea Garza, president of the Iraan-Sheffield Chamber of Commerce, is heeding the words by the former chamber president of dreaming big with the event’s revival.

“When I moved here from Rankin two years ago, I realized there’s just not a lot to do,” she says. “There needs to be more to do here. We need a breath of fresh air. Just some more activities, some more things for the kids. And, of course, that’s what the Chamber of Commerce is about, helping businesses and things like that. The main reason we wanted to put this on was to help businesses spruce this town up.”

It will also be a rebirth of sorts for the town’s signature Alley Oop Fantasy Land. For years now, aficionados of quirky roadside attractions have lamented the park’s decline, complaining of rusty playground equipment and trash-strewn grounds. Yet the town still had a museum  with a collection encompassing not just exhibits on Alley Oop and its creator, but also collections that inspired him to create the strip in the first place. By 2019, however, the museum closed after its director, the irrepressible nonagenarian Edna “Snooks” Collett, suffered a fall.

Garza hopes this year’s event will put the park back on the map and set a course for the museum to reopen “down the road.”

“I’ll be honest,” she says, “I haven’t been in the museum. It was closed when I got here, but I hear there are lots of cool things in there, like arrowheads and fossils, and some Alley Oop stuff, and they are not doing anybody any good like that. So we are hoping to raise some money to get that back open.”

Although Hamlin was not a native West Texan nor even a long-term resident of the area, his now 89-year-old creation—it’s still in syndication with artist Jonathan Lemon and writer Joey Alison Sayers—was born and raised in Iraan. Without his life-altering stint drawing maps and art layouts for oil companies there in the 1920s, and thereby falling utterly in love with the bewitching Trans-Pecos deserts and mountains, and its literal truckloads of prehistoric fossils, Hamlin may never have settled down at all.

Born in Perry, Iowa, in 1900, Hamlin fought in World War I before finishing high school, attending college, and then years of restless travel and a succession of jobs as everything from a sign painter to a semi-pro boxer to various roles at various newspapers. At the Fort Worth Star-Telegram, in 1923, he was a writer, photographer, and finally, a cartoonist. The job came to an end inside of a year when he and a co-worker were caught printing fake labels for bootleg whiskey bottles on the paper’s engraving equipment.

Hamlin headed southwest to the oil patches, where he applied his artistic talents toward drawing topographical maps and field layouts. While in the Iraan area, a geologist explained to him the processes that created modern Iraan: how the seas that once covered much of Texas retreated, how those craggy mountains came to be, the rise and fall of the dinosaurs, and the cave-dwelling lives of our most distant human ancestors.

Hamlin took it all in, and the first sketches of Alley Oop took shape as a lantern-jawed, loincloth-clad caveman who was never without his giant cudgel. Alley ventured through the land of Moo with pet dinosaur Dinny and his woman Oola. (Her name comes from the French “ooh-la-la,” the name of the comic from “Allez-hop!” Alley Oop most likely came from allez-hop, a cry French acrobats would holler before each of their most daring feats.)

Launched in December 1932, Alley Oop was a success from the start, syndicated to 400 papers by 1934. “I’ve yet to reach the stage where Alley and his gang bore me,” Hamlin told Literary Digest that same year. “I like cartooning and paleontology both, and my so-called comic is a combination of the two.”

Five years later, Hamlin felt that Alley, Dinny, and Oola had “overgrazed the pastures” in the Land of Moo. He’d run out of “Bone Age” (his equivalent to the Stone Age) shenanigans for his characters.

Dorothy Stapleton, his former high school sweetheart-turned-wife and model for Oola, suggested introducing a time machine, which Hamlin did through the character of genius scientist Dr. Wonmug. The time machine propelled Alley Oop to new heights of popularity, including spawning a No. 1 hit song by the Hollywood Argyles in 1960 and entering into the lexicon of sports. More importantly, it energized Hamlin to keep making the strip until his retirement in 1972.

Today, the term “alley oop” is most notable as a term for plays in basketball and football. Hall of Fame quarterback Y.A. Tittle, of Marshall, is credited with creating the football alley oop in 1957, and college basketball players started using the term when a player standing far from the basket lobs a long pass in the vicinity of the hoop and the ball is snatched out of the air and slam-dunked by a teammate.

Iraan’s decision to theme their town’s tourism on Alley Oop 32 years after the strip was born was not as crazy as it might seem today. Nor is the decision to restore the park and museum to its former glory. Judging by the energy from the project’s Facebook page, if nothing else, it has energized many of the town’s young leaders to dream big.