Edgar Palacios has recruited local and international talent for his rising club, whose season kicks off this month 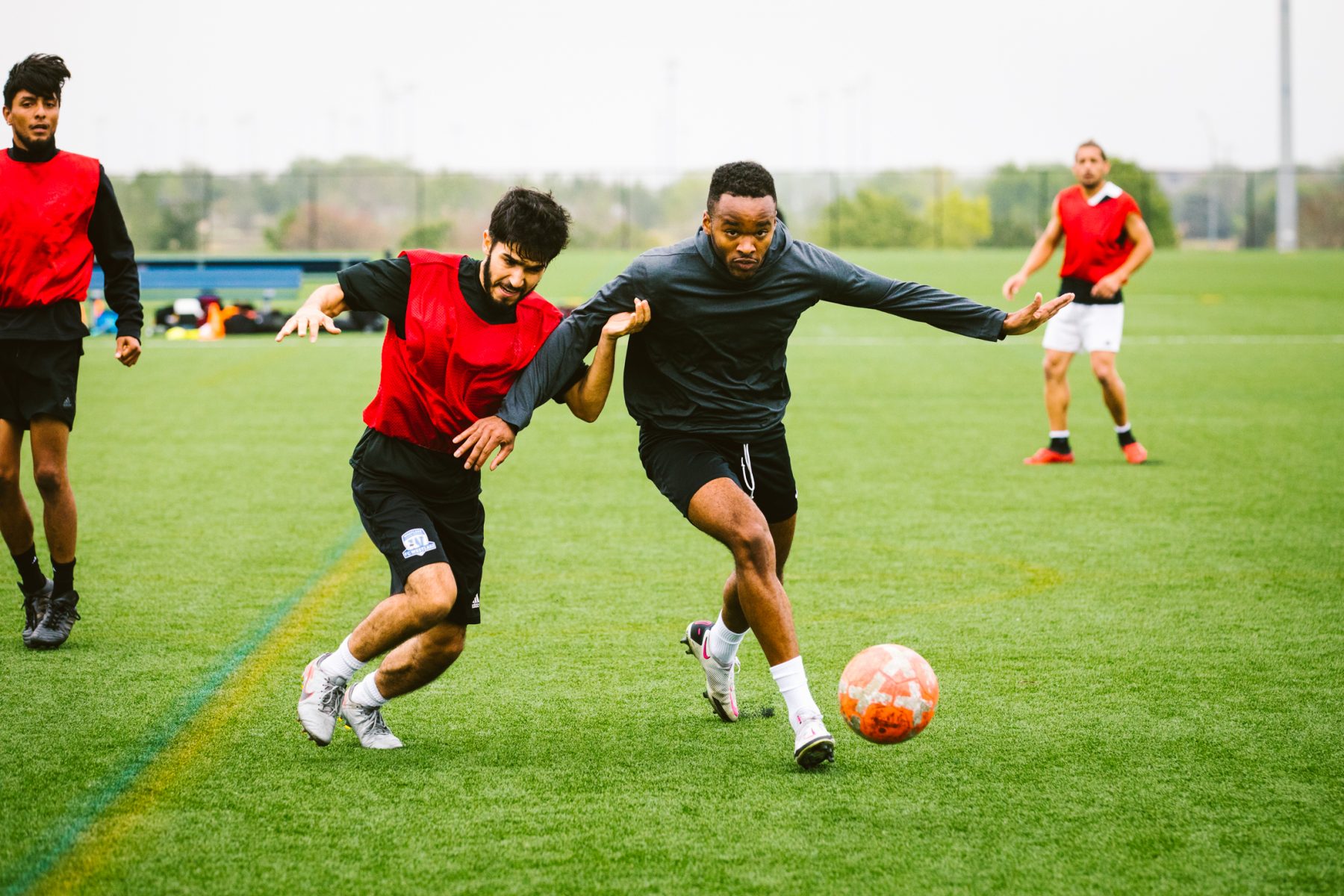 Round Rock Soccer Club players Rakan Alsankari and Devin Walton vie for the ball in a scrimmage at an early morning practice.

In Austin, all eyes are on Austin FC, the Major League Soccer team that debuted this spring with the flashy new Q2 Stadium and investors like Matthew McConaughey. But 10 miles up the road, a more low-key—but no less exciting—soccer team is also making a splash.

Round Rock Soccer Club, founded in 2017, initially launched in the United Premier Soccer League, one of many developmental soccer leagues. But after impressing the United Soccer Leagues organization, the team joins USL League Two, a semi-pro league below Major League Soccer, for the upcoming season. In this league, RRSC will face other Texas franchises such as Brazos Valley FC from Bryan, Texas United from Grand Prairie, and Corpus Christi FC.

Round Rock couple and team owners, Edgar and Janna Palacios, started the club, and their passion and know-how have contributed to the team’s rise in status.

The Palacios family ranch practically backs up to the Round Rock Multipurpose Complex, where the club practices and plays matches. Edgar grew up in a house nearby, kicking a soccer ball on a blacktop with hand-me-down cleats. He later played soccer at Stony Point High School, and was inducted into the school’s Hall of Fame. After high school, he went on to win a National Junior College Championship with Tyler Junior College in 2009, and even spent the 2012 season playing internationally for Ytterhogdals IK, a semi-pro soccer club in Ytterhogdals, Sweden. “Most Americans dream about playing overseas in Europe, and I was thankful that Sweden welcomed me with open arms,” Edgar says. He returned to Texas the following year to play indoor arena soccer for the Beaumont-based Texas Strikers, but family and his roots eventually pulled him back to the place where it all began. 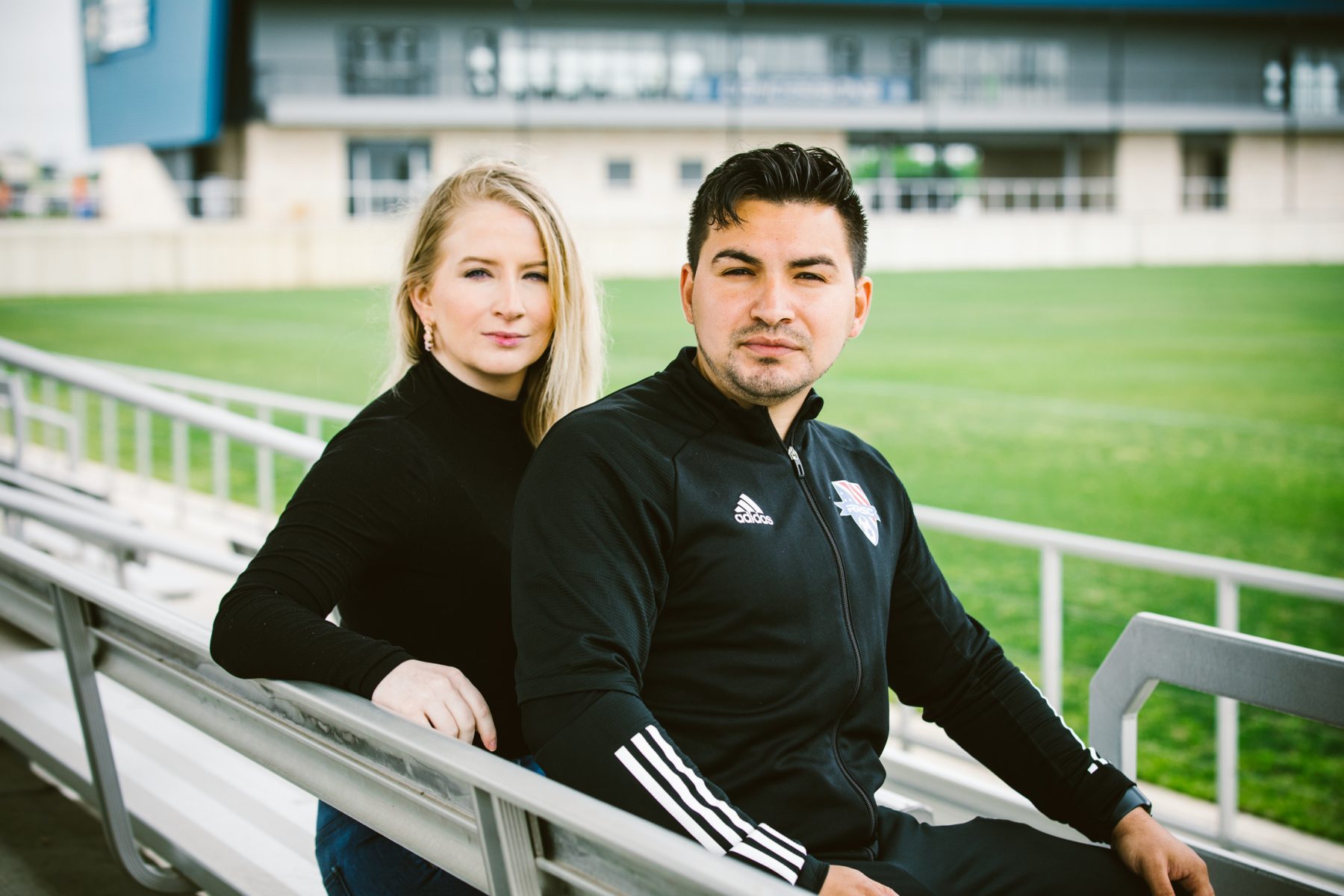 Round Rock Soccer Club owners Janna and Edgar Palacios sit in the new stands at the Round Rock Multipurpose Complex.

With interest in soccer on the rise in the U.S., Edgar and Janna saw opportunity in their own city. The club’s achievements stem partly from Edgar’s knowledge of the sport, but he credits Janna, who serves as the general manager, for the business acumen that has guided the team thus far. “The reason for our growth is that we understand each player is going to have individual paths, so we invest in casting a larger net to better help the chances of reaching their goals, small or large,” Janna explains.

Sibonelo Shezi (“Sibo” to his teammates), grew up in Johannesburg, South Africa, and came to the U.S. to play soccer at St. Andrews University in North Carolina, then later at Concordia University just outside of Austin. He says even collegiate soccer didn’t expose him to the level of talent he’s seen at Round Rock SC. Still vying for a spot on the roster, Sibo is hoping to join signed players like Jamie Beamish, who grew up in the small village of Collingsby, England, and Joan Mendoza, who played several seasons professionally in his home city of Cali, Colombia.

Such players underscore the international reach of soccer, but Joel Najar brings Central Texas pride to the team. Najar, who played for Del Valle High School, says he’s “ready to show what this area is about.” The enduring success of the Round Rock Express minor league baseball team inspired the city of Round Rock to spend $89,000 to add 1,000 new seats at the Round Rock Multipurpose Complex.

For the Palacioses, soccer goes beyond business. The club works with players as young as four, all the way through high school, and some students have scholarships to participate in activities at no cost. Standout high school students attend bi-weekly practices, working out with the team early in the morning before attending school. “We take time to invest in the community,” Edgar says.

RRSC’s first home match will be against Corpus Christi FC on Saturday, May 29 at 2 p.m., and tickets cost $10.