Spend a Weekend Getaway at One of These Quirky Vacation Rentals

From a silo on a llama farm to a Pullman train car, these seven residences come with tons of history and charm 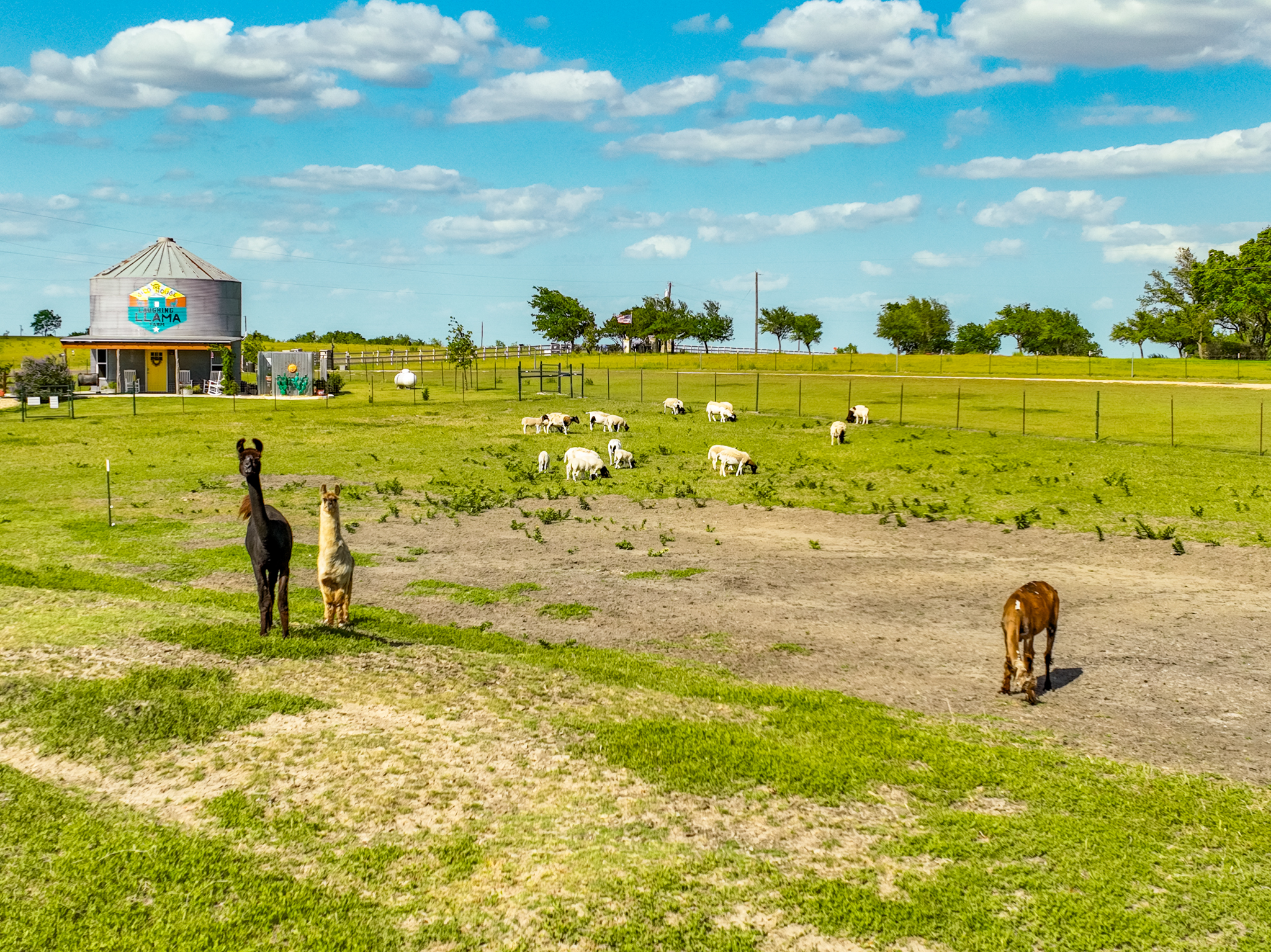 If there’s anything positive that came out of the pandemic, it’s certainly a newfound passion for travel within one’s own state where there are a plethora of creative, quirky, and design-inspired residences to stay in, usually in small towns tucked away from the hustle and bustle of everyday life.

And while you will find no shortage of conventional apartments, cottages, homes, and other well-reviewed vacation rentals to stay in on all your Texas travels, there’s something to be said for a residence that forgoes convention in both design and form and leaps at testing the bounds of possibilities, such as a Troy-based metal house made from an old grain bin, a Hobbit-inspired birdwatching house in Bastrop, and a repurposed train car apartment in Edinburg.

Choosing a place to stay at, too, is about to get a lot easier and more straightforward. This month, Brian Chesky, Airbnb CEO, announced on Twitter that the vacation rental platform has introduced a change that allows users to search by the total price, which will include all the typically hidden fees, i.e. cleaning fees and service fees, you don’t see until check out. So instead of being surprised or confused by the total just before finalizing your reservation, you’ll know exactly what you’ll be paying during your initial search.

If a quirky Texas vacation rental is what you seek, look no further than these captivating spaces scattered throughout the state, where you’ll find homes that not only rack up amazing guest reviews but also stretch the limits of creativity and possibility, and we’re all here for it.

The Silo House at Laughing Llama Farm
Owner Bonnie Chapa used creativity and ingenuity when building and decorating this metal vacation house on her family’s 10-acre farm in Troy, about 30 minutes away from Waco. The Silo House, which is made from a salvaged grain bin, opened for business in January 2019 and is one of Airbnb’s most wishlisted farm stays in the world.

Chapa, who is also an artist, and her husband did some homework for about a year on how to build a round house to complete the project. Chapa also relied on her “engineering genius” father and a remodeling company to bring it all to fruition, drawing out her ideas on an iPad without a single blueprint. She tracked down two old grain bins 50 miles away in a cornfield and used one of them to build the house, which is now furnished and decorated with farm-themed pieces, such as a repurposed tool bench that is now a kitchen island, a hanging International Harvester refrigerator door that houses board games and llama feed, and a turquoise-blue truck hood that now serves as a colorful headboard.

Though COVID-19 originally presented reservation standstills for a bit, Chapa says guests have trickled back and now fill her in-demand guest book. “People decided they still wanted to travel, especially to remote locations, and what better location is there than a llama farm,” Chapa says. “It really is paradise.” For those who want to make their stay extra special at The Silo House, there is the option to add on packages, such as a charcuterie plate from the Troy Lumberyard, a fresh flower delivery, a hands-on experience with llamas, morning mimosas, s’mores, and other meaningful additions.

Bartlett National Bank
Realtor Jennifer Tucker’s passion for historic preservation came in handy when she decided to buy the Bartlett National Bank in 2019 and turn it into an Airbnb in historic downtown Bartlett, about an hour north of Austin. The historic bank, which opened in 1904 and operated into the 1930s and briefly again in the 1990s, carries a natural charm from its days as a bank, including details like antique plaques, a penny tile floor, and the original sage-green paint on exposed stucco. 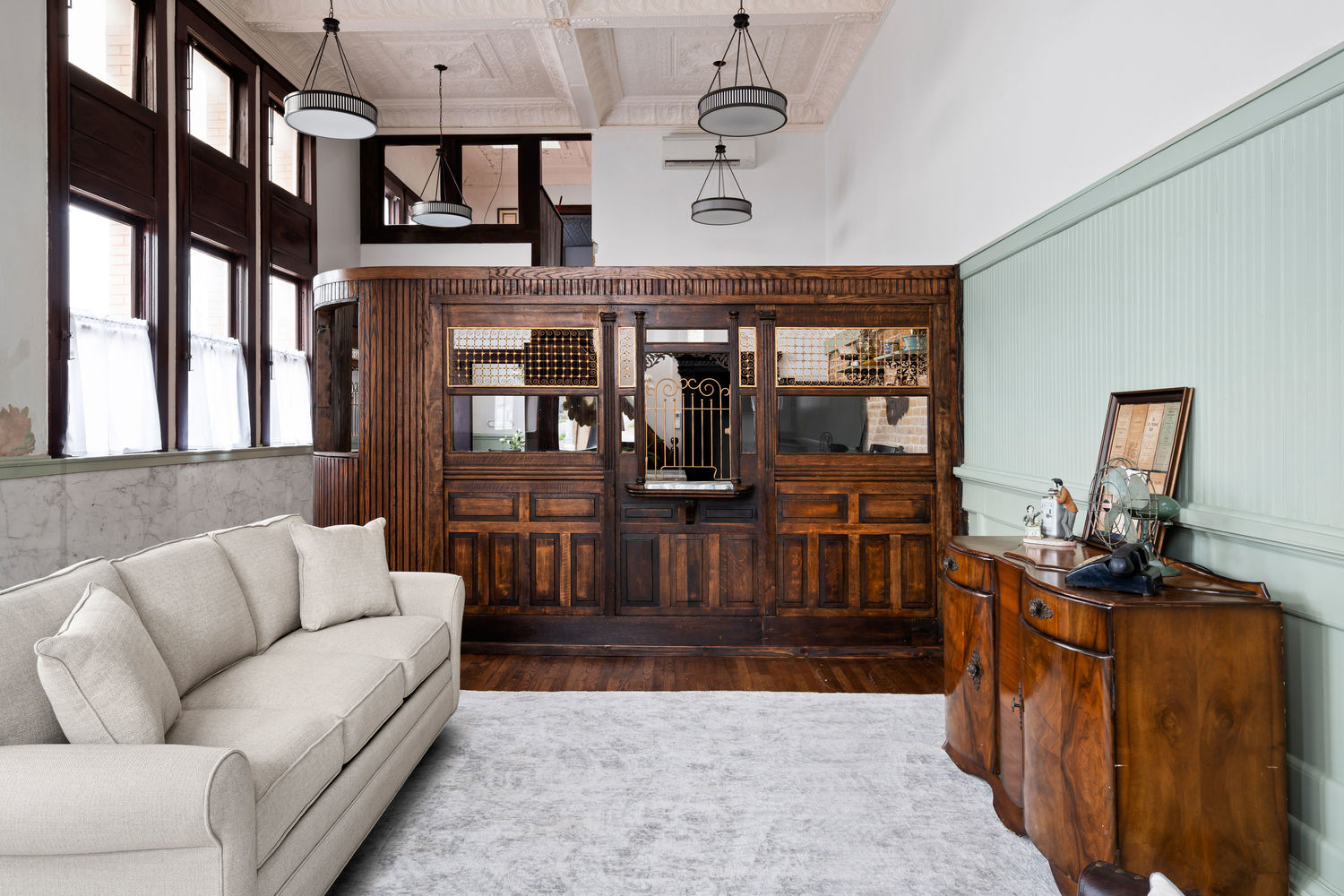 “I love old buildings. They just call out for me to rescue and save them, and I love Barlett. It’s such a sweet town with so much history and significance,” Tucker says. “I wanted to tell the story of why the Barletts bought that bank and its significance. It was very important to me to have people open the doors up in 2022 and step back into 1904.”

Bartlett was founded in 1881 by John T. Bartlett and became a central shipping point for many goods, including cotton and produce, in its early years. Tucker has restored the historic building, which carries many bank artifacts—some of which originally came from the Bartlett National Bank and others that are sourced from banks that operated during the same time period—like a bank teller cage and leather-bound, handwritten banking journals. But don’t worry: the modern-day amenities you’ll need to be comfortable, such as a fully operational kitchen, sofa, television, dining area, and cozy beds, are there to round out your stay. And if you feel like you recognize the residence, you just may; the Bartlett National Bank was used as a movie set on the 1998 Matthew McConaughey-starring film The Newton Boys. Tucker isn’t the only one bringing life back to Bartlett either; there’s been a great revitalization effort going on in downtown Bartlett worth reading about.

The Slater
Jeremy Turner, owner of this Dallas-based duplex in the Lower Greenville neighborhood, knows the power of nostalgia. Every nook and cranny of his and his wife’s colorful, ’90s-centric space is full of authentic details, including a Saved by the Bell-esque dining room, vintage McDonald’s PlayPlace equipment, VHS tapes and tube television sets, a payphone, teen-heartthrob posters and magazines, and other thoughtful, time-appropriate additions. 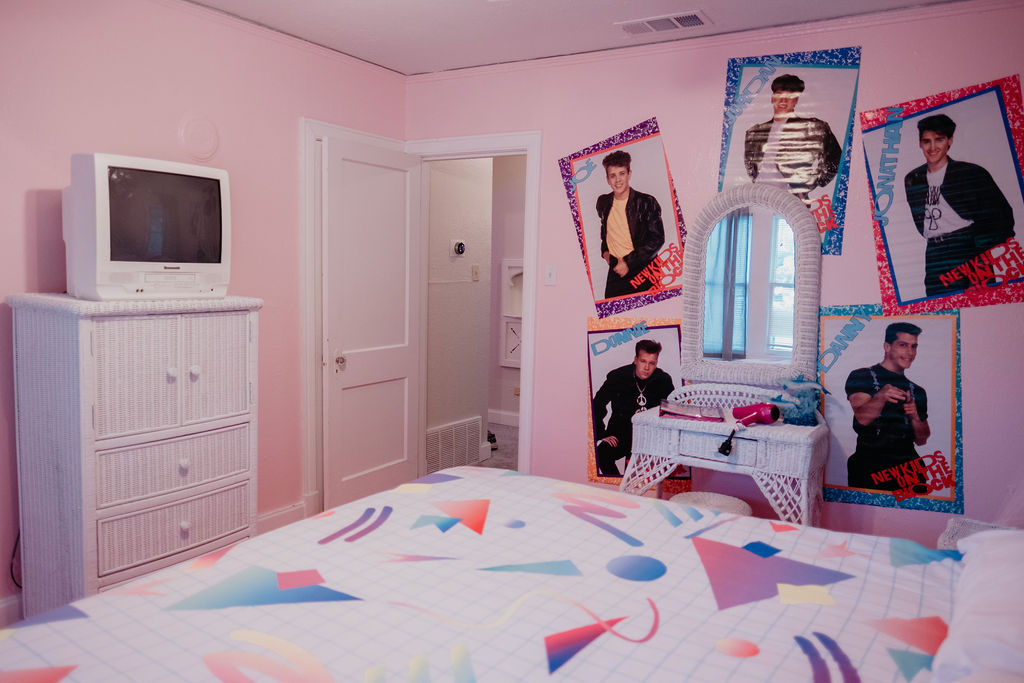 “I had this idea to make a house almost like a kid had made it, so we went real nostalgic,” Turner says. “I love old video games and toys from the ’80s and ’90s, since I grew up in that era, and I’ve always been a thrifter, so I went to tons of thrift stores, estate sales, and places like Round Top to find cool pieces to pull it together.”

The home is popular with guests and was even featured on Access Daily where Mario Lopez— Saved By The Bell’s Slater himself—got a video tour of the residence. If you’re swooning over the time capsule that is The Slater, it’s also worth checking out Turner’s other themed Dallas residences, including The McFly, The Kevin, and The Topanga.

The Perch
For four years, Spencer Millsap worked on building and finishing up his breathtaking, architecturally sophisticated cliffside in Terlingua, which overlooks the Chisos Mountains range of Big Bend National Park. Millsap visited Terlingua in 2016 on a birthday trip and fell in love with the “Chihuahuan desert light, visible geology, amazing hiking,” and deep history of the area before investing in 20 acres where he built the secluded Vrbo home, he says. 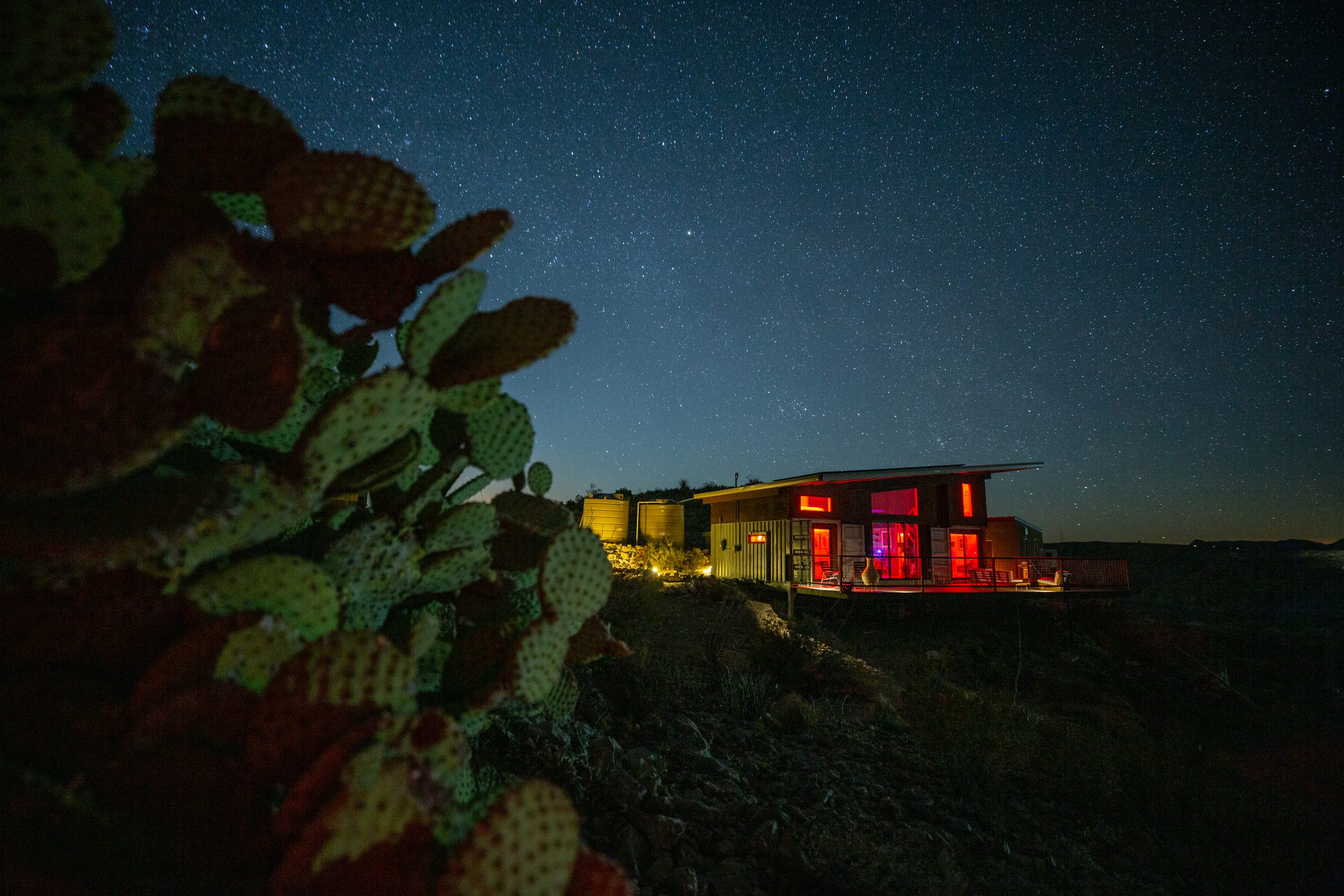 The Perch in Terlingua. Photo by Spencer Millsap Visuals.

Millsap, who has traveled the world as a photographer and cinematographer, was inspired from his extensive travels and the landscape surrounding the home when designing and decorating the relaxing, secluded Perch House, which is entirely off the grid and uses solar and rain catchment. “I leaned into the remote outpost elements of the space, almost like a moon base with sci-fi elements like ambient lighting, retro Southwestern decor, simple materials like metal and concrete, and earthy tones,” he explains.

During their West Texas stay in the space, guests can enjoy a library full of hiking guides and details of local history, lore, and tales, a vinyl record player, and amazing, see-it-to-believe-it views of the clear starry-night skies.

Pullman Train Cars
Ann Millard Flores and her husband, Isidore Flores, purchased their Edinburg property in 2004, and along with the property came two Pullman train cars. Though Ann isn’t quite sure how they ended up there, one of the train cars was already operating as an office at the time, while the other was empty with no windows and no seats. After a friend and business partner of Ann’s recommended the couple convert the train cars into Airbnbs, the couple pursued the business idea, using a contractor to do things like replace ruined wood and install a kitchen, shower, and a bathroom to make the train cars livable.

Today, railroad enthusiasts can stay at either the updated, colorful Garden Train Car Apartment or the Southwestern-style Nopalito Train Car Apartment and venture out to do things like birdwatching and explore surrounding parks in the Rio Grande Valley region. “We’re on a whole bunch of migratory pathways for all kinds of things—birds and butterflies and so on,” Ann says. “There is also quite an exuberant nightlife scene over in McAllen, which is the next city over.”

Hobbit’s Nest Treehouse
Jim Stevens originally had his Hobbit’s Nest Treehouse built for his wife so she could have a space to go birdwatching on their property. When the builder asked Stevens what he wanted the naturalist space to look like, Stevens told him: “I want it to look like a Hobbit would build it.” So that’s exactly what the builder did, harvesting most of the cedar wood from the property. Stevens is a fan of The Hobbit and The Lord of The Rings book series, but says he pursued the idea of a Hobbit house mostly because he wanted “circular doors and circular windows” to inspire the best birdwatching views. 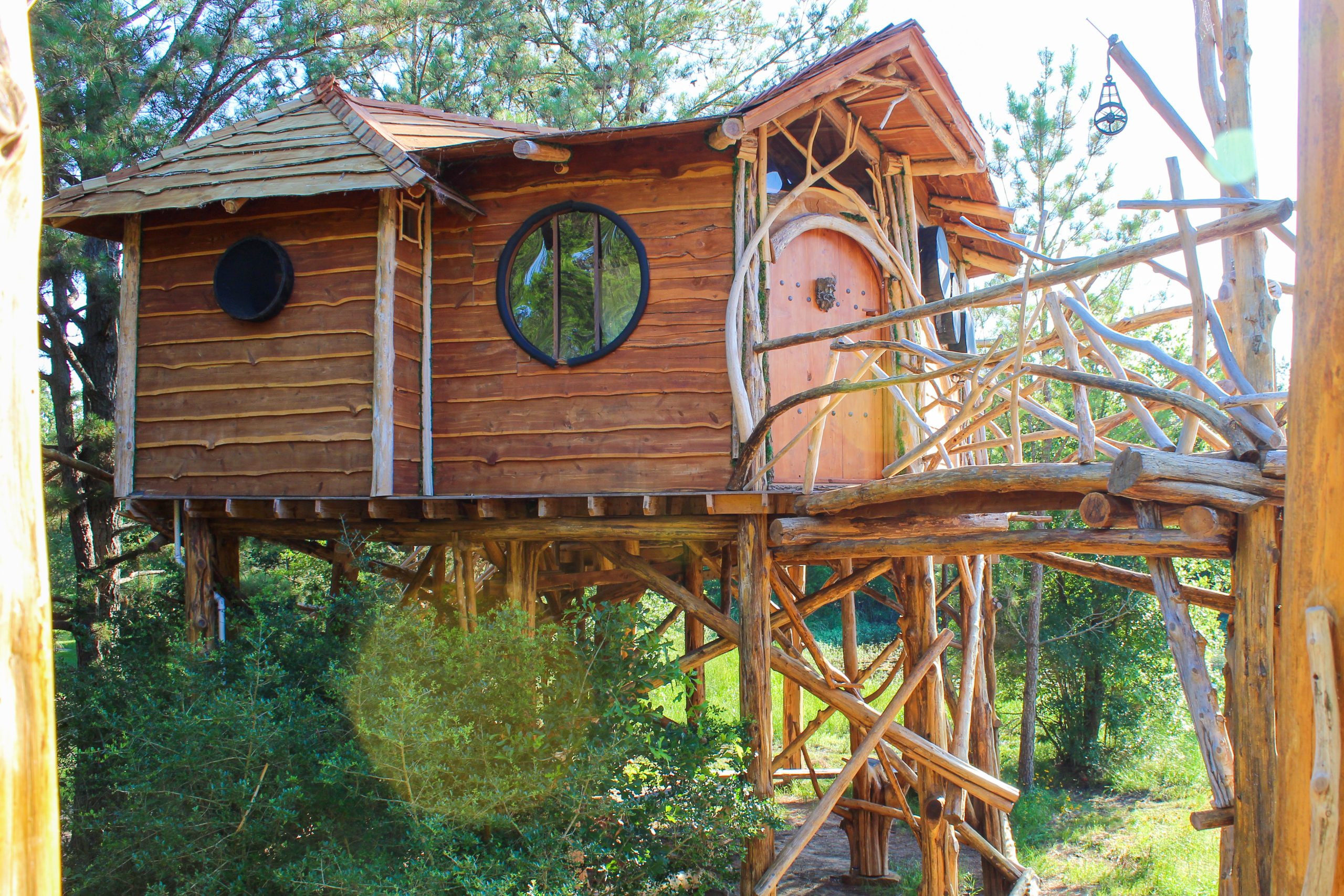 In 2019, the outdoor space was converted to a vacation rental and has become an extremely popular stay among travelers, with 320 nights out of 365 days booked last year alone. “It gives you a real sense of privacy,” Stevens says. “There’s also a lot of people who come to stay here who know a lot more about Hobbits than either of us do.” Guests can enjoy the natural wonder of the 42-acre Lost Pines property—which they share with Stevens’ two other vacation rentals—with hiking and birdwatching opportunities aplenty and the chance to venture out to surrounding attractions like Bastrop State Park and the Colorado River.

Naturalist Boudoir Cabins
If an escape from everyday life is what you desire, look no further than a stay at the cabins at the Rock’N Dollar Ranch with Freddy and Alina Blanchard as your hosts. The Blanchards decided to host an Airbnb space on their property after visiting one for the first time in 2017, taking an opportunity after Hurricane Harvey to redo a cabin on their property and turn it into a beautiful vacation rental, which they opened in May 2018. Together the industrious, self-employed couple have built, furnished, and decorated seven additional rentals, including Naturalist Boudoir and Naturalist Boudoir on Point, on their 300-acre property.

“The whole place is very peaceful. It’s very quiet. You don’t hear traffic or sirens. You actually hear coyotes howling and hooting owls,” Alina says. “It’s intended for two adults to get away from the hustle and bustle of life and reconnect, recharge, and rejuvenate in a beautiful, calm setting.”

Details included in the naturalist cabins include things like floor-to-ceiling windows, beds suspended with ropes from the ceiling, luxury linens, outdoor hot tubs, and other thoughtful details to help guests unwind. Though the Big Thicket National Preserve isn’t too far away, chances are you won’t want to leave this beautiful Lumberton property during your stay.