Officials are trying to monitor the impact of the disease, which could cause big declines in the bat population 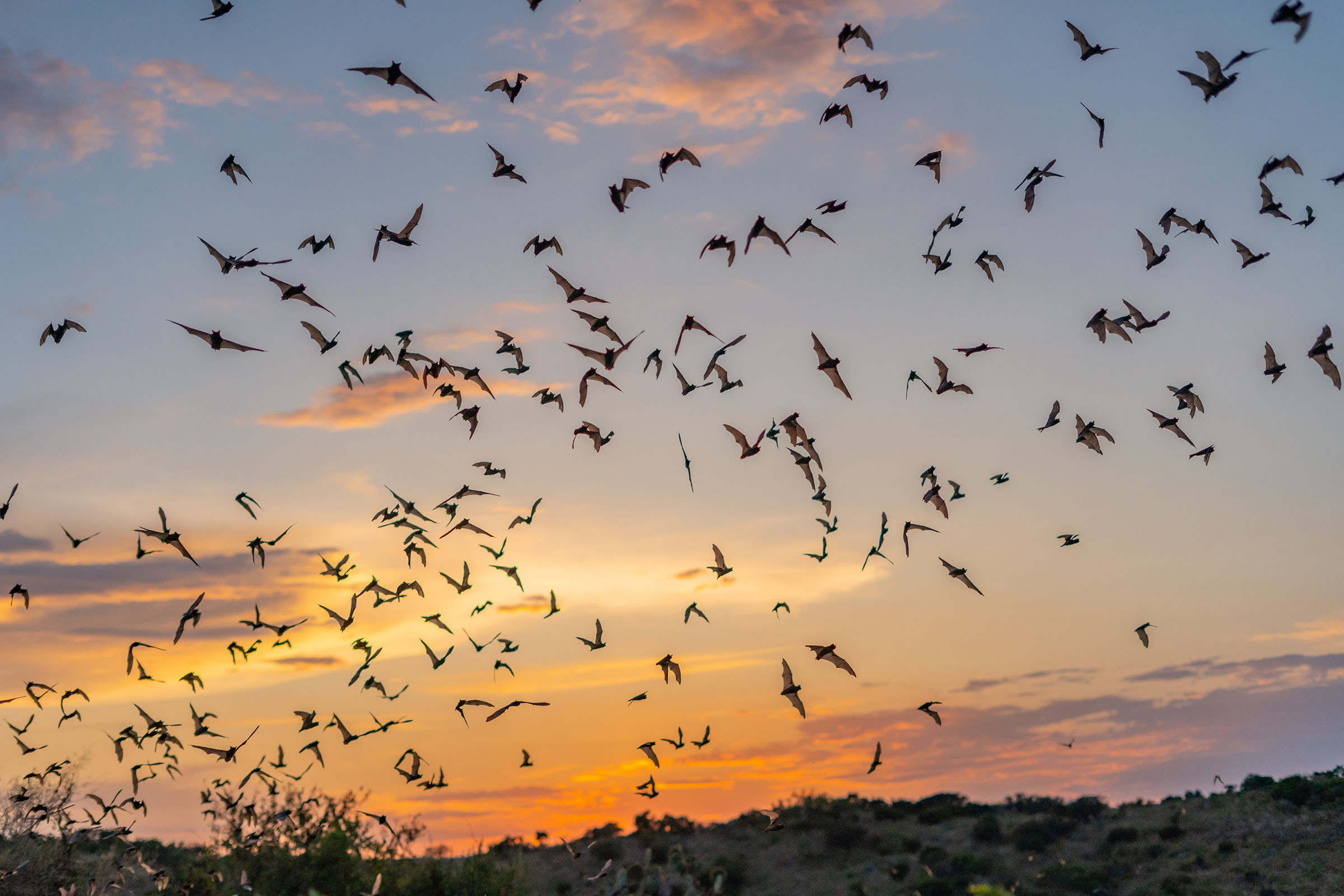 The pandemic arrived unexpectedly. Transported from Eurasia, it spread like wildfire, unexpectedly virulent, evading all quarantine measures, and leaving havoc in its wake. This story might sound familiar, but the disease in question is not COVID-19, and the population threatened isn’t people.

Over the last decade, American bats have been beset by white nose syndrome, a fungal disease that has ripped through cave colonies across the country. Last year, the first confirmed case appeared in Texas. This winter, the Texas Parks and Wildlife Department launched an effort to find out how bad the spread has gotten—and they need the public’s help.

The dangers of white nose syndrome add to a population already disrupted by February’s winter freeze, which killed hundreds of bats under city bridges in places like Austin, Houston, and San Antonio. (Texas Parks and Wildlife estimates the cold snap may have killed as many as 30,000 bats across the state.)

White nose syndrome is caused by a cave-growing fungus that is likely Eurasian in origin, says Nathan Fuller, a bat biologist with the department. In Old World caves, the fungus co-evolved with Old World bats, growing peaceably on their wings and causing no trouble. But sometime around 2006, the fungus was introduced to cave systems in New York, Fuller says, and the bats of North America were completely unprepared. “The bats here roost in high numbers and they’re very susceptible—and as we’ve seen over the last year, there’s nothing better for a disease than finding a virgin population.”

How can Texans help?

At this point, Texas Parks and Wildlife is still trying to figure out how widespread the disease is. If you see dead bats out, report them to the department with a picture and any location data. (Be sure not to touch them, as a bat may be carrying rabies.) The agency has set up an email hotline at [email protected]. The data they get from citizens will help them test bats and target future conservation efforts. And if you have bats on your property, Fuller adds, reporting them will help the agency build a clearer picture of bat populations on the state’s private lands.

“It’s important for people to understand that bats are worth protecting,” he says. “We need to get people to care about bats. That opens up funding opportunities that will help us hold on to remnant populations.”

When North American bats go into winter hibernation, their metabolism slows and their body temperature lowers to the ambient cave temperature: around 40 to 50 degrees. A low metabolism also depresses their immune system. Without any natural defenses, the fungus begins growing on them, giving their faces the characteristic white nose and eating holes in their wings.

“A hibernating bat is basically a ball of fat and protein that a fungus would want to consume,” Fuller says. Eventually, the bats wake up. Sick and unable to hibernate properly during the lean months of winter, they rapidly burn through their stored energy, starve, and die.

For more than 10 years, white nose syndrome has raged through the caves and hollows of the eastern United States. Many caves that once hosted thriving bat colonies have been completely emptied, according to Fuller. In 2009, he entered a white-nose infested cave in an northeastern state and found the floor carpeted in dead bats, a layer of decomposing bat goo and sad little piles of fragile bones. “It’s hard to put it into words,” he says, “but that’s the kind of imagery people are not seeing enough of to realize how bad this disease can be.”

The white nose fungus was first reported in caves of the Texas Panhandle in 2017 and had spread south into the Hill Country by 2019. The first sign of the actual disease appeared in 2020, when Texas Parks and Wildlife began receiving reports of large numbers of sick bats, many of them the common cave bat. Bats seen active during the winter are generally suspected of having rabies or other infectious diseases. But many of the Texas bats tested for rabies came back clean, Fuller says, suggesting white nose was the likely culprit.

“We thought we’d had eyes on the most important parts of the state for monitoring the bat population,” he says. “But bats are cryptic, and most of the state is private land.”

If white nose syndrome behaves in Texas as it has up north—which is not certain, Fuller emphasizes—then the state could see bat populations decline by 90 percent across the state. The charismatic and populous Mexican free-tail bats are unlikely to be badly affected: Experiments have shown they generally don’t develop the disease. But their migrations could be spreading the fungus around. Meanwhile, Fuller says, preliminary reports suggest that Cave myotis populations—once the second-most widespread bat in the state—have absolutely crashed, with some landowners warning that colonies on their land have disappeared.

“It isn’t that all the bats here are going to die,” Fuller says. “There are going to be some remnant populations, but we’re going to have a huge decline in what was once a robust population of bats. Even if the Mexican free-tails make it through, there are 30 more species out there, and half of them are probably susceptible to white nose.”

The bats that roost in smaller numbers, in little caves, and under tree bark are just as important as high-profile roosts, such as the colony beneath Austin’s Congress Avenue Bridge, Fuller says, and we will notice their absence. A lactating bat can eat its body weight—up to 12 grams in some cases—of insects every night, with a particular focus on crop-devouring moths and beetles.

“It would not be a stretch to say that this is a billion-dollar problem,” he says. “Bats provide an incredible ecosystem service by consuming agricultural pests. There’s nothing we can do that kills insects as efficiently as bats do. They move nutrients around. People harvest bat guano as fertilizer. They provide only good, and don’t do any bad.”