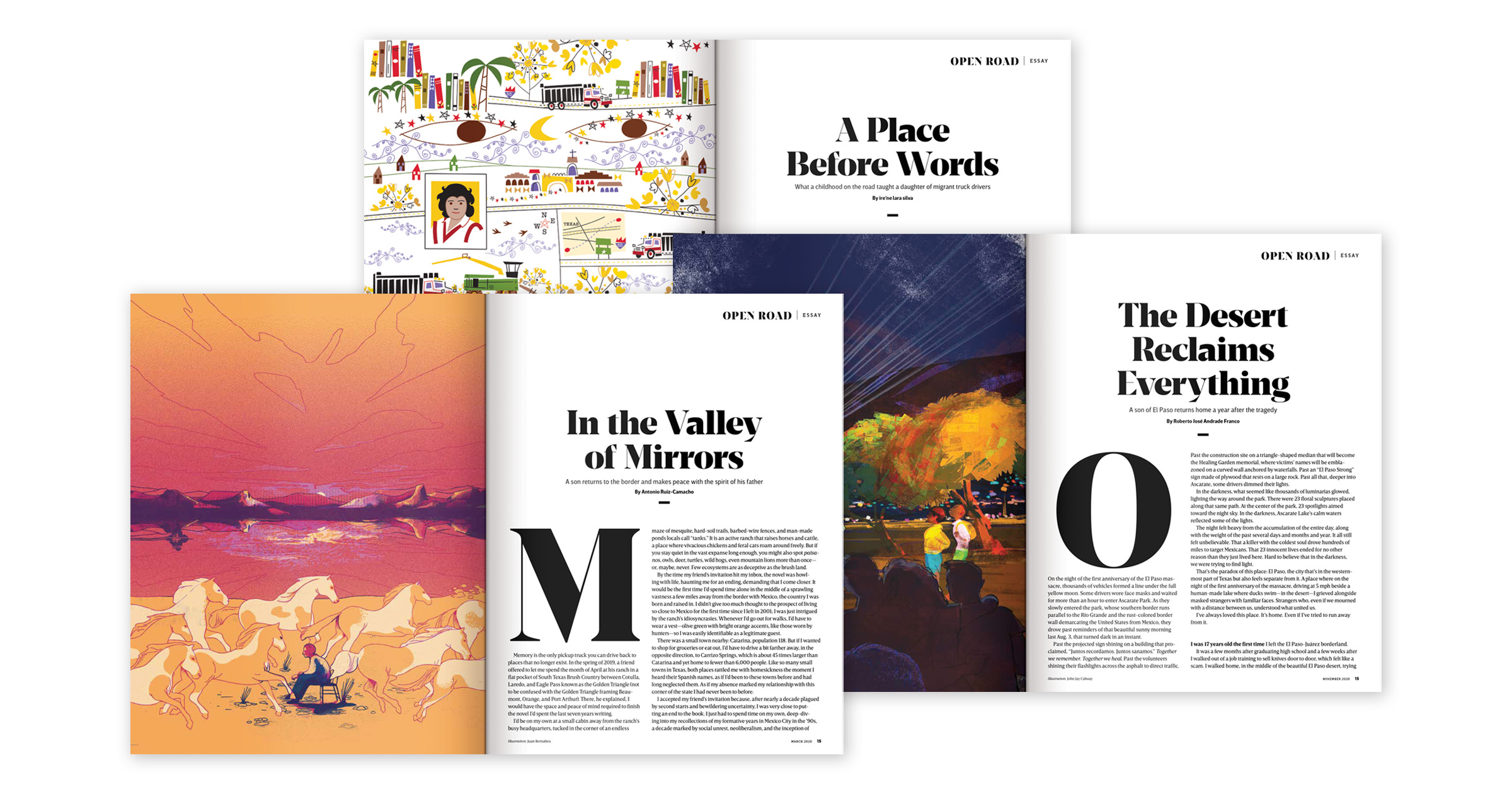 For the first time, Texas Highways will be represented at the biggest award show in magazine journalism.

Texas Highways is one of five finalists for the esteemed 2021 National Magazine Award for Columns and Commentary, the American Society of Magazine Editors announced last week.

Texas Highways’ submission in the category features Open Road essays from Antonio Ruiz-Camacho, Roberto José Andrade Franco, and ire’ne lara silva. Each essay is about an aspect of their experience as Latinos in the Lone Star State.

The National Magazine Awards for Print and Digital Media, or the Ellie Awards, are the most prestigious prizes in magazine journalism. This is the first nomination for Texas Highways in the magazine’s 47-year history.

“We are honored to be recognized alongside such prestigious publications and thrilled to see these three brilliant writers heralded for their work,” Editor-in-Chief Emily Roberts Stone said. “The nomination is a credit to their compelling depictions of their distinctive Texas experiences, and to our Deputy Editor Michael Hoinski who has shepherded the Open Road section from its inception.”

Texas Highways’ submission is up against work from four other nominees: The Atlantic’s Anne Applebaum, The Economist’s Ann Wroe, The New Yorker’s Jelani Cobb, and The Paris Review’s Aisha Sabatini Sloan.

The award winners will be announced during a virtual presentation on June 10.

silva’s essay “A Place Before Words” was published in the September 2020 edition of Texas Highways. In the piece, she writes about her experience growing up as the daughter of migrant truck drivers who crisscrossed the state during her formative childhood years.

This is not the first time the essay is being recognized. Earlier this year, the piece won the 2021 Texas Institute of Letters Edwin “Bud” Shrake Award for Best Short Nonfiction.

“It’s been really great and very unexpected,” silva said of the story’s reception. “My background isn’t something that’s very well known. People aren’t familiar with it. It’s not a common story. It has been a complete surprise to see people react so strongly to it.”

Published in the March 2020 edition of the magazine, Ruiz-Camacho’s “In the Valley of Mirrors” is a reflection on his childhood near the Texas-Mexico border and his relationship with his father. Ruiz-Camacho said the Ellie Award nomination was awesome, and it was “incredibly powerful” to see that all the pieces submitted by Texas Highways were written by Latino writers.

“It’s all about representation,” Ruiz-Camacho said. “I think these three pieces talk about just how complex and diverse the Latino experience is, and I think that’s so important.”

A native of El Paso, Andrade Franco wrote about his feelings toward the city and the power of community one year after the Walmart massacre in “The Desert Reclaims Everything.” Published in the November 2020 edition of Texas Highways, the piece was a finalist for the TIL Shrake Award.

Andrade Franco was on the couch eating oranges with his daughter when he found out about the nomination. He said he didn’t know what the award was when the news was announced, but he soon realized the significance of the honor.

“Once that happened and then I saw what a big deal it was and what other magazines were nominated, it started to sink in,” Andrade Franco said.