Think the Texas Revolution Started in Gonzales? A New Exhibit Will Have You Thinking Again. 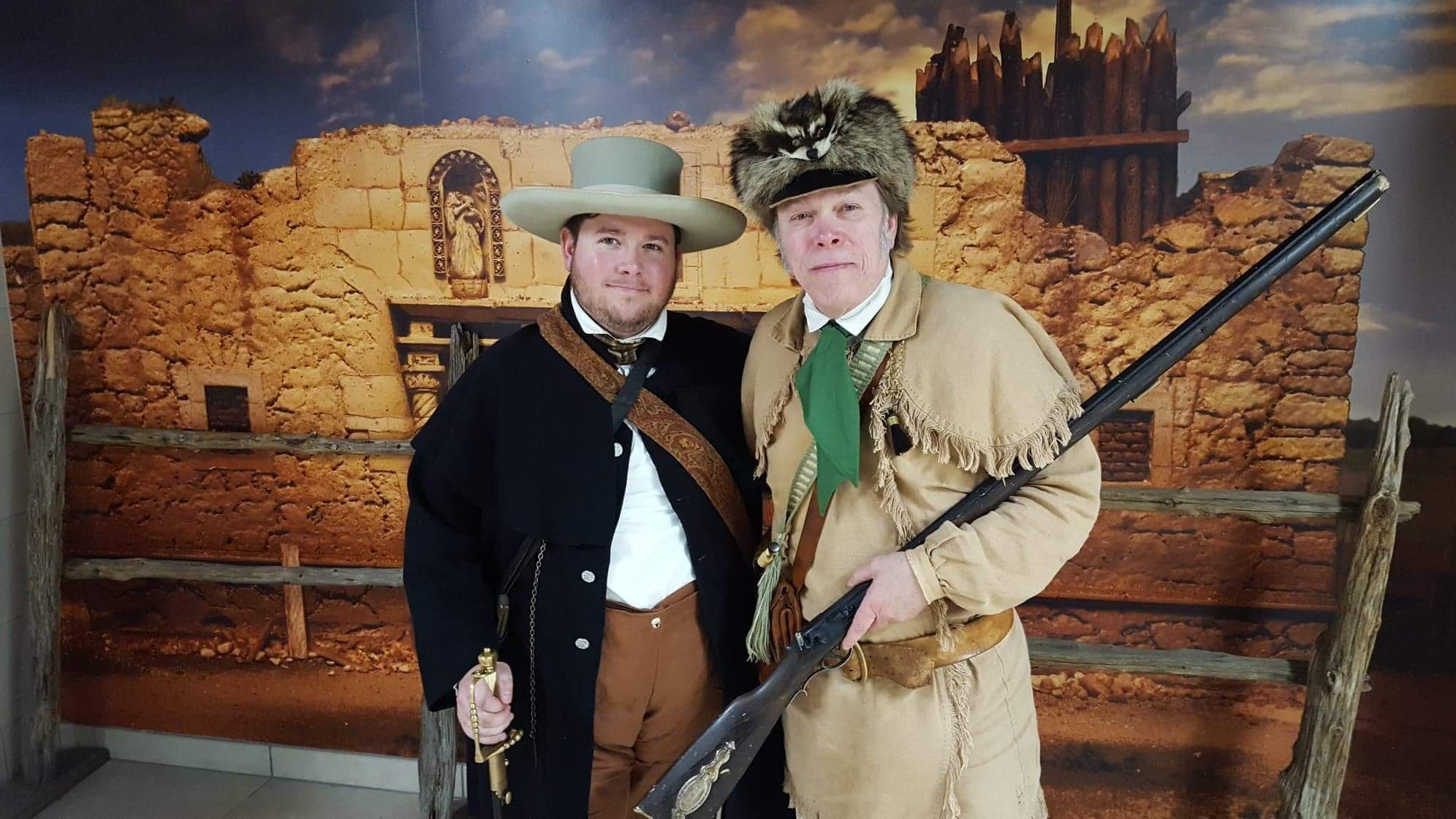 It tends to be glossed over today, but Brazoria County played a role in Texas Independence. Even though it was the heart of Stephen F. Austin’s American colony in Mexican Texas, the Gulf Coast county gets lost in the narrative that the shooting match began with the “Come and Take It” skirmish at Gonzales and culminated at San Jacinto.

A new exhibition at the Freeport Historical Museum and Visitor Center makes a pretty good case that the die was cast at Fort Velasco, a Mexican garrison that once stood over the town of Velasco, where the Brazoria County town of Surfside Beach is today.

Curated by museum director Wade Dillon, Fort Velasco walks visitors mainly through the five years leading up to the pivotal year of 1832, when armed conflict at that coastal citadel greased the skids toward war between Texan colonists and the Mexican government. Through authentic artifacts, representations of period clothing, and 10 or so informative panels (featuring illustrations by Dillon), the new, original, and exclusive exhibit conjures up the conflict. Dillon’s recently departed father, Allen Dillon, a David Crockett reenactor in San Antonio (pictured above), contributed several items.

“The exhibit opens up by laying the ground floor that leads to these two armies fighting at the mouth of the Brazos,” says Dillon. “We start with the arrival of Austin’s colony under the empresario system, and then how the people of Texas reacted to the Law of April 6, 1830.” From there, he says, the exhibit lays out the Anahuac Disturbances and how the people of Texas reacted to them. Then comes “the preparation for and action in the Battle of Fort Velasco.”

To back up a bit, Fort Velasco was the result of the Law of April 6, 1830, which in turn was the result of a fact-finding mission from Mexico City government, through Austin’s Texian colony led by Gen. Manuel Mier y Teran. Ostensibly fourfold in goals, Mier y Teran’s assignment was to find precious metals and other minerals in Texas; assess the number and disposition of the Native tribes; fix the border with the United States (Washington and Mexico City could not agree whether it was the Red River or the Sabine); and finally, to gauge how well Austin’s colonists were assimilating as citizens of the Republic of Mexico.

Not well, Mier y Teran found. This last aspect of his mission came to overshadow all the rest: the Anglo Texans, he observed, were neither learning Spanish nor swearing themselves to the Catholic faith, as they had promised on accepting their Mexican land grants. And they still were devoted to the U.S. Constitution rather than that of Mexico.

On his return to Mexico, Mier y Teran filed a blistering report, concluding in part that: “Texas will be lost for this Republic if adequate measures to save it are not taken. … Where others send invading armies … [the Americans] send their colonists.”

His report was received with grave concern at the highest levels of government. A crackdown was decreed—the law of April 6, 1830. Texas historians equate this law—which among other things, banned further immigration from the U.S., the importation of slaves into Mexico, and attempted to organize the Texas coastal import-export trade with customs oversight and tariffs—with the Stamp Act of the American Revolution, in that Texans found it to be an unbearable abridgment on their liberty and wallets.

Fort Velasco was built as a direct result of this law. In those days Galveston did not exist, and the principal ports were located at the mouths of the mightiest rivers: Velasco had the Brazos and Anahuac had the Trinity. The Texans had been bringing in and shipping out goods and slaves with little or no oversight for years, and suddenly the Mexican government had banned the international slave trade and was now demanding taxes on trade of all goods. Nobody loves the tax collectors; therefore, customs officials needed protection in the form of forts like Velasco.

For the exhibit, Dillon, an illustrator, created a computer-aided graphic of what the fort most likely looked like. Based on historic witnesses’ detailed descriptions, it was a circular fort ringed first by a sort of moat. Inside that was a wall of sharpened wooden spikes (a life-size stretch of such a palisade fence is prominent in the exhibit) surrounding a guardhouse topped by a cannon. Take away the cannon and the smaller swivel gun on one battlement, and you could be looking at a 3,000-year-old citadel in Celtic Britain.

Given that the fort was built less to repel American Indian attacks or foreign invaders, and more to protect the authorities from the local citizenry, its mere existence was an ominous sign of the troubles to come. Enter the Anahuac Disturbances.

These disturbances began with a squabble over two or three runaway American slaves who made their way from Louisiana to Anahuac in the spring of 1832. Adhering to Mexican law, Anahuac’s military leader, a Kentucky-bred Mexican loyalist named Col. Juan Davis Bradburn, gave them asylum and welcomed them into his paid workforce. A slavecatcher sent by their owner from Louisiana demanded their return. Bradburn refused.

The slavecatcher hired a local attorney to plead his case, a hotheaded young Alabaman by the name of William Barret Travis. Bradburn would not budge. Travis resorted to trickery: he appeared in Bradburn’s quarters draped in a sinister cloak, apparently complete with face-covering cowl, purporting to be an emissary from the slaves’ owner and threatening Bradburn’s garrison with armed attack. This farcical ruse led only to Bradburn arresting both Travis and his law partner Patrick Jack, locking them up inside a brick kiln.

Jack’s two brothers down the coast in the town of Brazoria, a couple of dozen miles up the Brazos from Fort Velasco, resolved to spring Jack and Travis. They would need artillery to do so, and the closest available cannons were inside Fort Velasco. By this time, many of the colonists, incensed by the Law of April 6, were looking for any excuse to fight, so the brothers were able to rally up a militia of 100 to 150 Brazos Bottomlands partisans.

In the wee hours of June 26, 1832, this force assaulted Fort Velasco, attacking on two sides by land and a third from the Brazos River, via guns on the schooner Brazoria. After a long night of fighting, five Mexicans had been killed along with seven Texans. Realizing he was almost out of ammunition and had no hope for reinforcements, Mexican commander Domingo de Ugartechea waved the white flag, and the fort and its cannon belonged to the Texans.

On hearing the news of this skirmish at his Matamoros posting, a despondent Gen. Mier y Teran, the man indirectly responsible for Fort Velasco’s existence, fell into a black hole of depression. On July 2, 1832, he wrote an associate wondering how Mexico could hope to hold on to Texas if they couldn’t stop killing each other, and on July 3, he literally fell on his own sword.

Less than four years of uneasy peace in Texas later, Mier y Teran’s darkest nightmares would come true at the Battle of San Jacinto—an army of colonists defeated one led by his domestic nemesis Santa Anna.

The exhibit does a commendable job of telling the story of the 1832 battle from the perspective of both Ugartechea and the Texian commander of the force, Henry Smith. It also does a good job of placing these events in the context of not just the Texas Revolution but also the latter part of the 19th century, when the fort, dismantled after the revolution, was rebuilt to protect against Union navy incursions.

Throughout, Dillon’s panels are well-written and creatively illustrated—one memorable computer-aided image of his devising has us imagining the Alamo church as it appeared in 1836 to stunning effect. Copano Bay Press of Corpus Christi, purveyors of all things printed, have furnished arresting replica maps from this era, including one from the Civil War showing a panorama of the Texas Coast as seen from a soaring sea-bird, a pelican’s-eye view of the mouths of our principal rivers and string of barrier islands.

If you were of the belief that the Texas Revolution began at Gonzales, you should “come and take” in this exhibit. It might just change your mind.

Fort Velasco is on display at the Freeport Historical Museum and Visitor Center through Aug. 31.

(Clarification: The original version of this article mischaracterized one of the computer-aided panels as a reimagining of the Alamo on the beach. It has been updated to reflect that the image represents the Alamo as it appeared in 1836.)