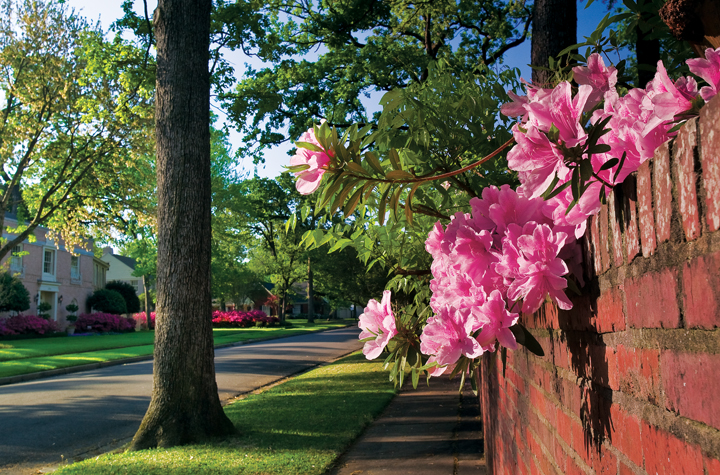 The annual Azalea & Spring Flower Trail winds about 10 miles through Tyler’s vibrant neighborhoods. These pink blossoms sprawl over a wall at East 2nd and Roseland. (Photo by Randy Mallory)

From where I sit, a picture-window perch in my home’s sunroom within Tyler’s 76-block Azalea District, a distinctive sense of tradition prevails.

I can see old oaks lording over homes of diverse styles and sizes. The houses—mostly built in the early 20th Century—line red brick streets like architectural books on a shelf: a brick Victorian mansion here, a wood-frame Craftsman house there.

This time of year, I revel in autumn’s metamorphosis. Oaks cloak themselves in shades of gold and bronze, sweet gums turn reddish-purple, and a looming bald cypress drops a blanket of rust-colored, needle-like leaves.

A couple of blocks away on Chilton Street, a decades-old Japanese ginkgo tree shimmers with a yellowish glow that aspens would envy. Homeowner Billy Barham, glad for passersby to pose for photos beneath his beloved ginkgo, suggests that they not wait. After an early freeze one year, the slow-growing, 30-foot tree shed its golden locks in a single day.

Most who live in Tyler’s historic neighborhoods love sharing their surroundings. So much so, that locals regularly fling open front doors and garden gates for historic homes and gardens tours.

The largest garden in the city, the 14-acre Tyler Municipal Rose Garden dates to 1952 and welcomes visitors year round. It takes center stage each October when eye-popping roses—38,000 bushes and 500 varieties—look their best during the annual Texas Rose Festival (October 14-16, 2010).  Since 1933, the festival’s elaborate parade, Rose Queen’s tea and coronation, and rose show have paid homage to a rose-growing heritage born of disaster.

A century ago, droughts, freezes, and disease devastated the area’s peach orchards, and farmers turned to roses. By the 1950s, some 200 growers in the Tyler area raised half the nation’s roses. Only a handful of growers remain, but local processors still ship much of America’s commercial rose crop, even though it’s grown mostly in Arizona and California. The Tyler Rose Museum, at the Rose Garden, uses historical photos and videos to tell the story of the growers who made Tyler roses famous. The 7,500-square-foot museum also boasts Rose Festival memorabilia and hand-sewn, bejeweled Rose Queens’ costumes dating to 1935.

Each year I stroll the Rose Garden’s Technicolor rows of neatly labeled bushes, and pause at its fountains and reflecting pool. I was delighted recently to rediscover another horticultural gem tucked in a back corner of the garden.

“I call it the garden beyond the roses,” Sue Adee tells me at the IDEA Garden (IDEA is an acronym for Innovate, Demonstrate, Educate, and Apply). She’s one of the Smith County Master Gardeners who hold seminars and nurture the 650 plant varieties packed into this 10,000-square-foot horticultural bonanza. “There’s color in the garden just about all year,” Adee says. “We want to show the wide range of plants that can succeed in home gardens.”

In the last few years, Tyler has added roses to street medians and parks. These roses are among landscaping plants tested and recommended by the Texas AgriLife Extension Service as “EarthKind:” That means these plants grow well in a variety of soils, while thriving with minimal fertilizer, pesticides, and watering.

Last year the city also opened the Chamblee Rose Garden as the anchor of an all Earth-Kind botanical garden on the nine-acre grounds of the 1859 Goodman-LeGrand Home and Museum. Forest-green iron fences and native red-rock pillars surround the garden’s 120 rose bushes.

Goodman family heirlooms such as a grandfather clock from the Colonial era, fine silver and china, books, paintings, and photographs fill the restored Classical Revival mansion (open for tours and special events), which stands as the northern gateway to historic downtown.

The best view of the historic square is from the new rooftop lounge at Jakes Tyler. This popular eatery (steaks and seafood) fills three levels of a 1904 building that once housed a men’s clothing store. From the rooftop here, you can see the sun set behind the 15-story Art Deco Peoples National Bank (now Tyler Towne Centre), designed by noted Houston architect Alfred C. Finn. When built in the 1930s, it was among Texas’ tallest buildings. The Great Depression didn’t affect Tyler nearly as much as other parts of the nation. The East Texas Oil Field had blown in, and oilmen opened offices in the Peoples Bank tower and constructed homes in then-new neighborhoods.

My wife, Sallie, and I often walk or bike through these side-by-side neighborhoods. We stop at Brady’s Coffee for a medium-roast brew and chit-chat with the regulars. Or we drop by Bruno’s, a traditional Tyler favorite for Italian food since 1976, for hand-tossed pizza and antipasto salad. And, we frequently enjoy the Azalea District’s lovely, eight-acre Bergfeld Park.

A must-see stopover during the Azalea Trail lies at the corner of Dobbs Street and College Avenue. That’s where the owners of three contiguous houses—owned by the Davis, Pyron, and McGuire families—let visitors meander through their lush, manicured gardens.

Azalea Trail visitors get a look inside a handful of well-gardened historic homes during the annual Spring Homes Tour, held in late March or early April. “People in the historic neighborhoods devote so much effort to their properties,” says Historic Tyler executive director Janie Menegay. “They really want people to see the architecture and learn the history!”

Year round, the 1878 McClendon House presents refined architecture and history. One family—descendants of Texas State Supreme Court justice M. H. Bonner—lived in the Eastlake Bracketed house for more than a century. The judge gave land for a house to his eldest daughter, Mattie Bonner, who married attorney Harrison Whitaker. The newlyweds obtained Victorian-style mantles, light fixtures, and furniture from New York City. The McClendon House was such a cultured gathering place that Texas Governor R. B. Hubbard, a family friend, described it as “like living on Fifth Avenue.”

Mattie’s younger sister, Annie, and her husband, Sydney McClendon, later bought the house and raised nine children there. Their best-known child was White House correspondent Sarah McClendon—famous for her grilling of presidents at press conferences. A preservation group restored the mansion and opened it to the public in 1988.

Each Saturday evening in October, the McClendon House offers guided Spirit Tours. (It’s also open during the Azalea Trail, for special events, and by appointment.) The McClendon House has its share of ghost stories, but this not-so-spooky annual affair actually features local actors portraying Sarah and other influential McClendon family members.

My favorite stop last year was the funky hideaway of Jim and Ann Powell. Footpaths ramble past 90-plus varieties of trees, shrubs, vines, and ground covers, plus colorful annual and perennial plants such as hostas, Mexican heather, Indigo, and daylilies. Interspersed throughout are eclectic recycled items that the Powells call “artistic junk!” A rusty wheelbarrow overflows with red and pink begonias. Yard rakes stand on end, their metal tines painted blue, red, and yellow like blooms. A cluster of decorated plates and pans rise from a worn-out bed frame as an offbeat “flower bed.”

“It’s fun showing off the garden,” Jim Powell tells me near a row of birdhouses fashioned after rickety shacks. “Visitors seem so interested and friendly, it’s like having neighbors drop by.”

That attitude might just be the best Tyler tradition of all.

For homes and gardens information, an historic landmarks guide and other tourist tips, call the Tyler Convention and Visitors Bureau at 903/592-1661 or 800/235-5712. For information on downtown events and attractions call the Heart of Tyler Main Street Program, 903/593-6905.