Once it blooms, it will be one of only a handful of times a corpse flower has blossomed in Texas 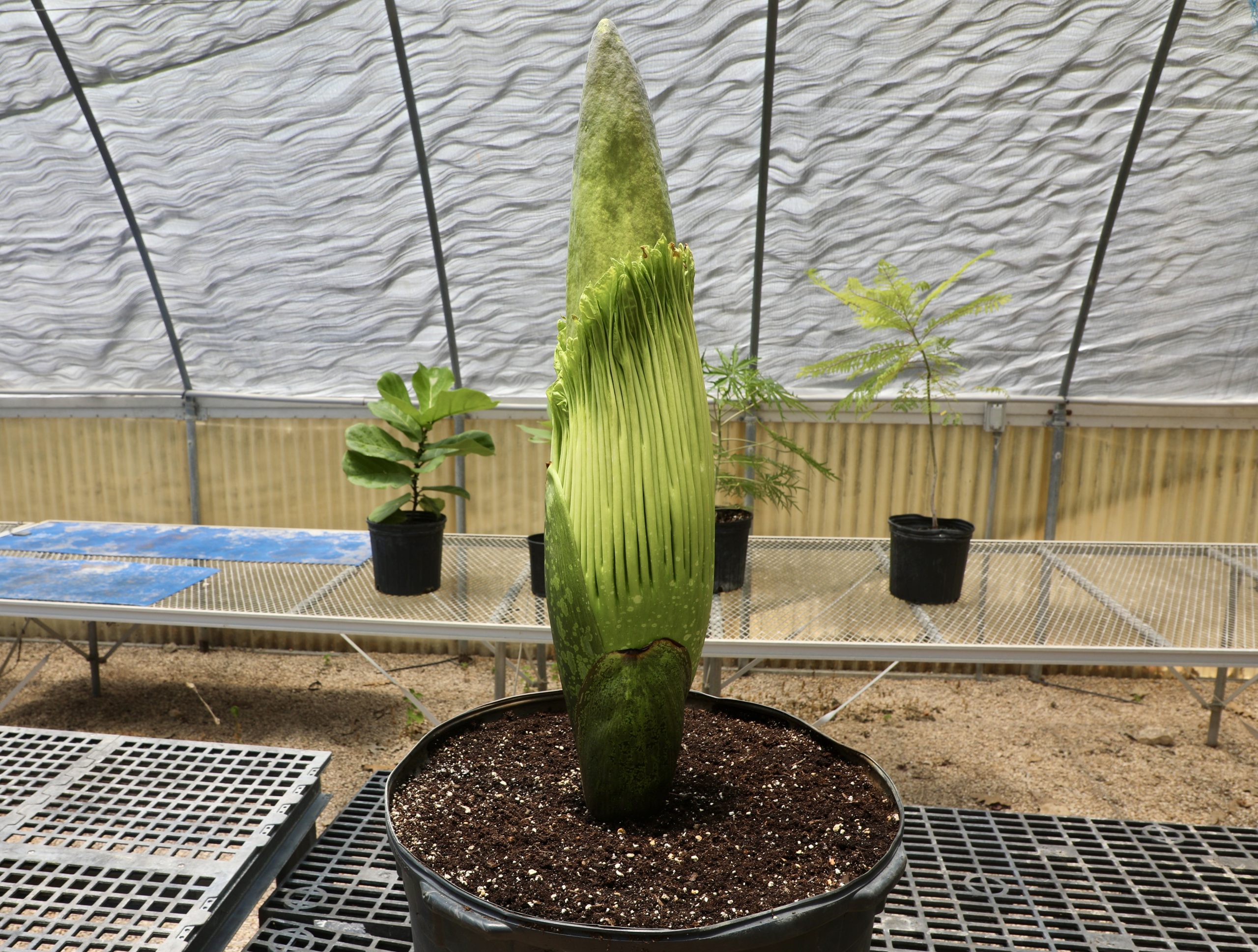 The words “corpse” and “flower” are not commonly associated with one another, but the distinctive stench of the Indonesian rainforest plant Amorphophallus titanium is said to merit such a description.

Texans will likely get a chance to see—and smell—a corpse flower in the coming days with the expected bloom of one of the plants at the San Antonio Zoo. The zoo announced Friday that it’s on “full bloom watch” for what is believed to be the first corpse flowers to ever bloom in the Alamo City.

The plant gets its name from the potent smell it releases when its spathe opens and unfurls a maroon blossom. The odor, which is meant to attract pollinators like flesh flies and dung beetles, has been compared to everything from dirty diapers to 3-day-old roadkill to rotting flesh.

Ariana Duffey, a conservation technician at the zoo’s Center for Conservation and Research, says corpse flowers are the largest plants in the world that has flowers at their base. The plant typically grows to be 6 to 8 feet tall, but there have been some as tall as 10 to 12 feet. During its lifetime, it goes through cycles of growth, reaches a point where it produces either a leaf or, on a rarer occasion, a flower, and then goes through a dormant period until it starts growing again.

“It can take eight to 10 years of growth before it has enough energy to actually bloom,” Duffey says. “The plant that we have is actually 20 years old and this is the first time the plant is doing this.”

The zoo received the plant at the end of May from The Huntington Library, Art Museum, and Botanical Gardens in California, where it was propagated in 2002. Duffey says the zoo is unsure what prompted the plant to flower after years of producing just a leaf—possibly a change in the environment or stored energy. Whatever the reason, they’re excited to have the first to bloom in San Antonio. (The San Antonio Botanical Garden also has one, but it has yet to bloom.)

While this is the first known corpse flower to blossom in San Antonio, it’s not the first for the state of Texas. The first in memory occurred in 2004, when crowds in Nacogdoches braved the stench of the 5-foot corpse flower that bloomed at the Mast Arboretum at Stephen F. Austin University.

Six years later, the Houston Museum of Natural Science’s 30-pound flower, which was given the name “Lois,” bloomed right as the museum’s Cockrell Butterfly Center was preparing for a wedding. “I don’t need a florist anymore,” Jessica Zabala, the bride, joked to the Associated Press. “I’ve got Lois.”

In 2012, Morticia, the Giant Corpse Flower at the Moody Gardens in Galveston, opened its flower for the first time. In a rare treat, it opened again in 2016. This is not unusual—once a corpse flower starts blooming, it is likely to do it again every three to five years.

The San Antonio Zoo has yet to name their plant, but Cyle Perez, the zoo’s director of public relations, says he’d love to get the public’s input. “I’m also curious to see how people describe the smell,” he says.

Speaking of the smell, last year San Antonioans had the chance to find out what the stench is like at the Witte Museum’s Extreme Creatures: Life at the Limits exhibition. A “smell station” was set up where visitors could get a whiff. The Witte’s replica has been the closest Duffey had ever gotten to smelling the flower. “I’m very excited to see if it’s going to smell like that or worse,” she says.

For now, she and other technicians at the zoo will continue to be in “full bloom watch,” monitoring the flower and taking daily measurements. Duffey says the plant is growing several inches a day, and once it gets closer to blooming, it will slow down to an inch a day. A day before it flowers, two leaves at the bloom will fall off. Then get ready to hold your nose.

The flower is out on display for the public to see, with docents available to answer questions. The zoo has set up a live camera feed on through its Facebook page so people can watch the plant’s progress. Don’t hesitate to see it, as a typical bloom lasts only 24 to 36 hours.