A visit to the Charles Goodnight Historical Center 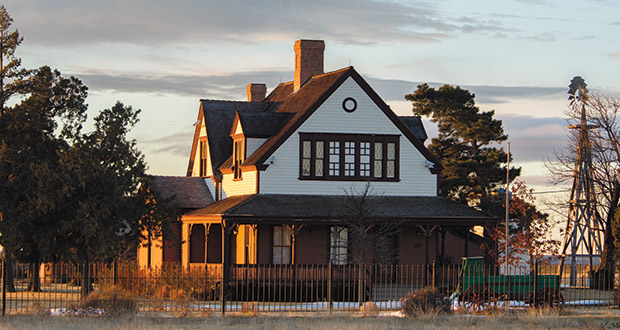 Early travelers on the wagon road that later became US 287 must have thought it was a mirage—a gabled Victorian manse with a covered porch on a West Texas plain. Now the centerpiece of the Charles Goodnight Historical Center, the ranch house of legendary Panhandle cattleman Charles Goodnight is also a tribute to grit and creativity—his and that of a pair of modern-day ranch women who strived to preserve it.

Likely the first house in the Panhandle designed by an architect, the 2,900-square-foot, two-story structure was built when Goodnight founded his ranch in 1887 in Armstrong County. Considered the father of cattle ranching in the Panhandle, Goodnight partnered with Irish businessman John Adair to form the 1.3 million-acre JA Ranch in 1876 before striking out on his own with a portion of the original JA.

Since Goodnight’s death in 1929 and the demise of his empire, a succession of ranch owners have used the house as quarters for employees and their families. The frame structure was unoccupied and its fate uncertain when the last of the owners donated it and the adjoining 30 acres to the Armstrong County Museum in 2005, igniting a remarkable preservation effort that included volunteer craftsmen, the Texas Historical Foundation, and other benefactors.

The faithfully restored house and a ranch bunkhouse opened to the public in October 2012, with original furnishings and other period furniture. Added by year’s end were bison on loan from the Texas State Bison Herd in Caprock Canyons State Park, direct descendants of animals that Goodnight and his wife Mary Ann preserved in the late 1800s. The facility added a visitor center in 2013 to provide tours by local docents and introductory videos about the Goodnights and 19th-Century frontier ranching.

“It is the history of Texas and the history of the West,” says Montie Goodin, past chairwoman of the Armstrong County Museum. She and neighbor Anne Christian, the project chairwoman, worked to raise about $3.5 million for the restoration, researched the home’s original contents, and pulled off a more complicated “fixer-upper” than anything on the Home & Garden channel.

It was providential that the two septuagenarians were so deeply involved. Goodnight had hired Goodin’s grandmother Ella in 1904 to be his housekeeper, and she brought with her a two-week-old son, Cleo. Cleo Hubbard eventually became foreman of the Goodnight Ranch, working for new owners after Goodnight’s death. Hubbard and his family continued to live in the house, and Goodin was born there. Christian’s grandfather-in-law was also a cowboy on the JA.

The restoration team peeled away layers of paint to reveal the original wallpaper and opened fireplaces that had been closed with the installation of a modern heating system. They also located several original furnishings, including a grandfather clock in the entrance that still chimes and a child’s chair with a raised seat that Goodnight bought for a young Cleo Hubbard and kept after the boy grew out of it. When Goodnight got older and had a harder time getting around, he used the raised-seat chair so “he didn’t have to struggle to get up,” Goodin recalls.

Mary Ann Goodnight’s upright piano stands in the parlor and her sturdy oak desk with glass cabinets is in the master bedroom. A schoolteacher from Weatherford, she and Goodnight married in 1870 and she joined him on the range, originally residing in a Palo Duro Canyon dugout and enduring long periods of solitude while Goodnight roamed the JA. After the Goodnights moved into their ranch house, she taught children in a makeshift school in the cowboys’ bunkhouse, helped found the first college in the region, and lobbied her husband to preserve a bison herd when the animals faced overhunting.

Herd Wear, the retail store of Buffalo Gold Premium Fibers, takes care of the descendant bison herd in a small pasture between the Goodnight House and the store. Cecil Miskin and his wife Darlene relocated from Burleson to operate Herd Wear, which is filled with bison paraphernalia like leather dusters, bison rugs, scarves, beanies, and Western art. Miskin, who has raised bison for 30 years, leads pickup-truck tours of the animals upon request to provide a better view.

Scores of volunteers contributed to the Goodnight Historical Center’s restoration. The welding class from White Deer High School, located about 30 miles north, fashioned the wrought-iron fence around the home. Boy Scouts from Troop 80 in Amarillo built a dugout—located near the main house—similar to the one the Goodnights occupied in Palo Duro. They also built mountain bluebird houses and helped restore a model chuck wagon, a mobile cowboy kitchen that Goodnight is credited with inventing.

Across US 287 is the cemetery where Charles and Mary Ann Goodnight are buried, its fence adorned with bandanas left in tribute by visitors. Goodnight influenced the alignment of the highway as well, Goodin explains, because he erected an east-west fence to stop other ranchers’ cattle from moving south onto his land during the winter. The old wagon road and later the railroad followed the fence line.

The Goodnight Center is a blur between Clarendon and Amarillo if you are hurdling along US 287 at 70 mph. Its companion, the one-story Armstrong County Museum, located about 12 miles northwest in the county seat of Claude, is not obvious to long-distance travelers either. The museum chronicles the history of the JA Ranch and includes Goodnight Hall, which displays Goodnight photos and artifacts, such as a saddle and a wagon from the ranch. The downtown complex also includes the century-old Gem Theatre, featured in the movie Hud. No longer a commercial theater, it celebrated its 100th anniversary this past year and hosts traveling performances and local events.

“We are a tiny little town with a great big history,” says Amy Lovell, executive director of the museum’s ventures, of which the Goodnight’s remarkable home is the crown jewel. “People tell me they are surprised that there is so much here.”