A Weekend in Pittsburg 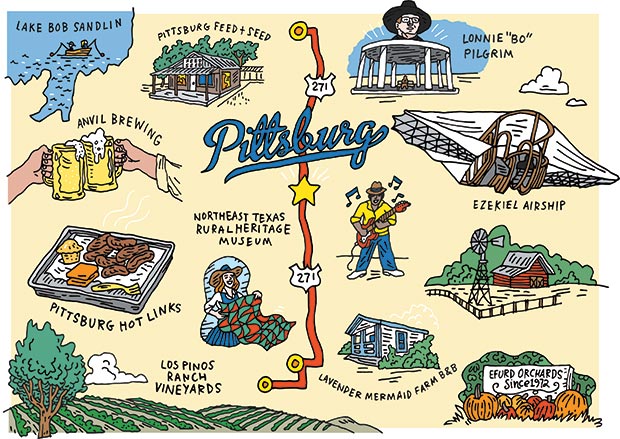 In Pittsburg, the hot links are plump, mermaids abound far from the sea, and a Baptist preacher invented a flying contraption that got off the ground a full year before the Wright Brothers made their famous first flight.

Surrounded by lush green forests and calm blue lakes, the town of 4,700 about two hours east of Dallas is probably best known as the hometown of poultry mogul Lonnie “Bo” Pilgrim, who died in July at the age of 89. But visitors to Pittsburg find much more than chicken when they venture into The Depot at the Northeast Texas Rural Heritage Museum, where a replica of a historic winged machine is suspended from the ceiling as if frozen in midair.

The anachronistic aircraft is called the Ezekiel Airship. Did it ever fly? Folks in Pittsburg say it did.

The anachronistic aircraft is called the Ezekiel Airship. Did it ever fly? Folks in Pittsburg say it did.

The Rev. Burrell Cannon hatched the idea for the airship around the turn of the 20th century while reading the biblical book of Ezekiel, which describes the prophet’s journey on a flying machine that utilized a “wheel within a wheel.” An inventor, sawmill operator, and Baptist minister, Cannon interpreted this as wheels of different sizes. As his imagination whirred, Cannon conceived of an internal motor that would turn a crankshaft, controlling fans to propel the aircraft.

In August 1901, a reporter from The Dallas Morning News found Cannon and a “corps of expert mechanics busily working on this wonderful invention” in Pittsburg. On a Sunday morning in late summer or fall 1902, Cannon’s employees finally rolled the airship to a field near the railroad tracks downtown to try it out. “Rev. Cannon wasn’t even there,” said Vernon Holcomb, a Depot museum volunteer. “He was apparently in church preaching.” 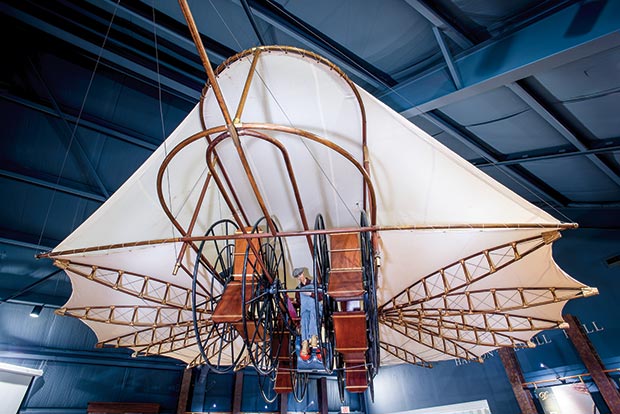 Witnesses claimed the airship soared 12 to 15 feet high before it malfunctioned. Children watched from a nearby fence as the machine careened toward them. “When it got in the air it started shaking, vibrating, and the kids had to scramble,” Holcomb said. The airship is believed to have traveled a distance of about 160 feet. “We don’t think it was a controlled flight, but it was definitely airborne,” he said. “It got off the ground one way or another.”

In 1904 Cannon loaded the airship onto a railroad flatcar to transport it to the St. Louis World’s Fair, the site of the first “Airship Contest.” The contest winner would be awarded a $100,000 grand prize for “aeronautical achievement considerably beyond anything yet attained!”

Cannon never made it to St. Louis. Near Texarkana, a storm blew the Ezekiel Airship off the train, destroying the flying machine.

Today, a historical marker identifies the field where the airship is said to have briefly taken flight. The site is practically next door to the home of Pittsburg’s other historic invention, the East Texas-style hot link. The stubby little “grease bombs” were first sold here in 1897. The last time I was in town, in June, a couple of buddies and I pulled up bench seats around a wooden, horseshoe-shaped table in the Pittsburg Hot Link Restaurant and wolfed ours down with crackers and Pittsburg Hot Sauce, which is also made in the restaurant and is known to friends and family as “Mean Gene” sauce after previous owner Gene Warrick. 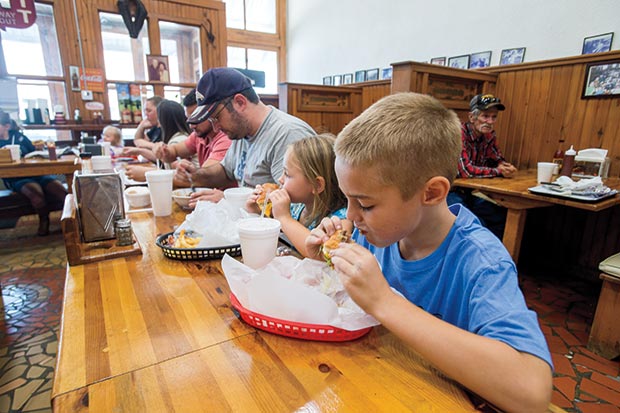 Some folks even call them “East Texas Caviar.” The restaurant also serves classic breakfast items like pancakes and omelets, in addition to burgers, sandwiches, and plate lunches.

After lunch, the Paccard bells from Pittsburg’s 75-foot-tall Prayer Tower chimed a pretty song as we walked past the biggest Coca-Cola mural in Texas, just around the corner from Anvil Brewing. The brand-new brewpub and dancehall revived the historic Pittsburg Feed & Seed, where Pilgrim launched his business in 1946. The feed store had been vacant since 1961, but new owners Byron and Kristin Aldredge rehabilitated the aluminum building and reopened it for business on Fridays and Saturdays, offering craft beer, live music, and pizza.

Walking Pittsburg’s downtown streets, we then made our way to The Farmstead, also part of the Northeast Texas Rural Heritage Museum. The fully restored farm features a general store and farmhouse containing many original furnishings, as well as an old well, outhouse, smokehouse, and barn, revealing how the region’s rural ancestors lived during the time Cannon constructed his airship. Shortly before our arrival, an unwanted guest had also made an appearance. “We had a nest full of eggs, and a chicken snake got ’em—all but one,” volunteer guide Joanne Bates informed us. 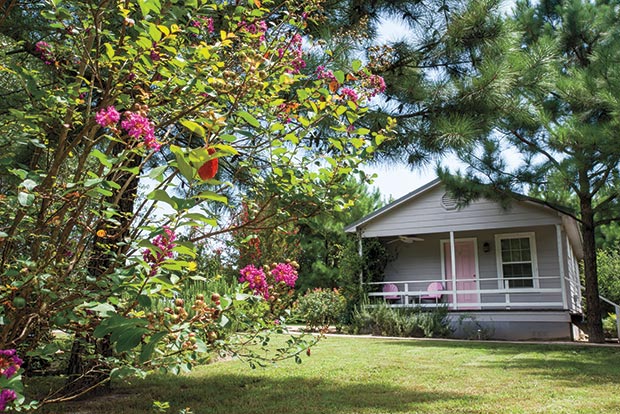 That afternoon we drove south down a narrow country road that tunneled through tall pines and hardwoods, suddenly opening into a beautiful clearing where grapes grow in the East Texas sun. When Los Pinos Ranch Vineyards opened about 15 years ago, the winery and vineyard raised a few eyebrows in the traditional community, says Gerald Jones, a managing partner. “People would come hide and say, ‘Don’t tell anybody I was here!’” he chuckled.

Inside the winery, which produces upwards of 10,000 cases a year, winemaker Arnulfo Perez led us past the wooden cask-lined walls of the barrel room and into a production room where wine was fermenting in huge metal tanks. On a windowsill of Perez’s laboratory office, where he samples and blends Los Pinos’ varieties of sweet and dry wines, I noticed a pile of trophy buckles. Each was more shiny and ornate than the last.

“You guys are going to think I’m crazy, but look at this,” Perez said. He grabbed a couple of cardboard boxes and showed us dozens of ribbons and medals garnered for his award-winning wines. We raised our glasses to toast his achievements. The winery offers private tastings by appointment, which includes a tour of the produc-tion facilities and ends with a pairing of wines and light hors d’oeuvres in Los Pinos’ Barrel Room.

That evening we sat on Los Pinos’ wooden deck overlooking the vineyard rows, feasting and passing around bottles of floral whites and bold reds. Eventually a bright, full moon illuminated our path toward the cozy cottages we had rented at the Lavender Mermaid Farm Bed and Breakfast around the corner.

The next morning, B&B owner Michelle Smith had left a metal pail larded with tasty breakfast treats just outside my cottage door. I sat in the cool shade, facing a lovely stand of young pine trees, and listened to birdsong that was disturbed only once by the distant horn of a passing train. Curious about the cottages’ mermaid-and-flower theme, I asked Smith about it when she stopped by to chat. She explained that she and her partner, Tanya Byrd, had previously owned a lake house filled with mermaid tchotchkes and decor, providing a convenient and catchy theme for their five landlocked cottages. 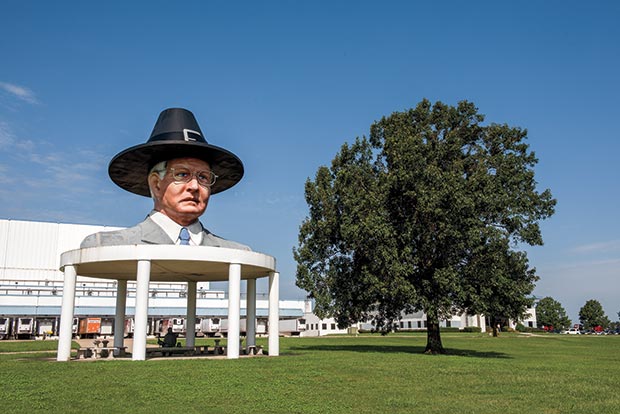 Before long, we made our way down the road to Efurd Orchards, a bustling produce stand and market surrounded by rows of bushy trees bearing locally famous Pittsburg peaches. Greg Efurd, who owns the orchard with his wife, Amy Efurd, said his parents opened the stand in 1972. “It was this little-bitty dirt-floor shed,” he said. “It kept growing, and we kept planting peach trees.”

Peaches grown in the sandy soil around Pittsburg just taste a little sweeter, he added. “I don’t know how many we sell. It’s a bunch though.”

Over the years, the Efurds have expanded their offerings to include jams and jellies, gifts and—a crowd favorite—soft-serve ice cream in a range of flavors such as fresh peach and blackberry. Tourists come for a peck of peaches and end up lingering in the rocking chairs or beside the duck pond, or they marvel at the antique farm equipment suspended from the rafters.

“We’ve got all this junk hanging from the ceilings,” Greg said. “A lot of people reminisce and say, ‘Man, I used to have that when I was a kid.’ It’s just good for parents bringing their kids out here to have a feel for an old farmers market, the way it used to be a long time ago.”

For Pittsburg visitor information, call the Pittsburg-Camp County Chamber of Commerce at 903-856-3442.