After driving the many miles required to reach Alpine from just about anywhere, a lot of folks see this town as if it’s the last stop on the roaring open road to Big Bend National Park. But here’s my best advice any time you get close enough to feel Alpine’s gravitational pull: Just give in. Failing to stop and explore the biggest little town in the Texas Outback is like trying to huff up Mount Everest without spending any time acclimating at base camp.

In other words, its not a good idea for anyone to travel straight into the big-sky country of Far West Texas without slowing down, taking a few deep breaths, and coming to an understanding of all you are about to see and do as you drive farther into the high Chihuahuan Desert. So, when the mountains start to buck up and your cell service goes all hinky, recognize the signs that it’s time to slow down, pluck the tumbleweeds out of your grille, and unplug-you’re in Alpine. 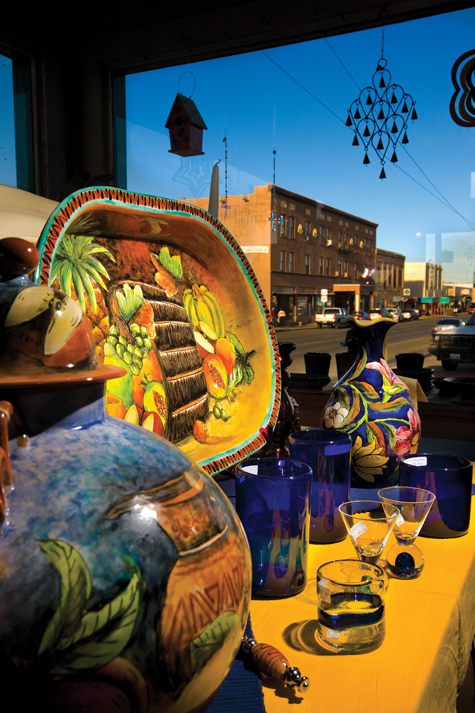 The city boasts many attractions that enhance the West Texas experience, but I suggest these must-dos to help you immerse yourself in the geology and culture of the region: a visit to the Museum of the Big Bend, a day of rock hounding, and a one-two punch of serious browsing at the CatchLight Art Gallery and the Apache Trading Post.

First things first. For the most authentic Alpine stay, check into the Historic Holland Hotel. The Holland isn’t the only hotel in town, but as the oldest and most eccentric of lodgings here, I hold it dear. Recent renovations brought in new furnishings to enliven the Spanish-style architecture of the 1928 main structure. (Be sure to note the original ceiling beams in the lobby, meticulously restored by muralist Stylle Reed in 2005.) From that building’s cozy crow’s-nest—little more than a bed and a 360-degree view—to the adjacent New York-style lofts, the hotel has something for everyone.

I love the Holland because it’s funky good fun. However, if your taste runs to Egyptian-cotton sheets, The Maverick Inn, a newly renovated roadhouse adjacent to Sul Ross State University that boasts wireless internet, fiat-screen TVs, and a swimming pool, may be more to your liking. And in the spirit of full disclosure, I also have to tell you that the Holland’s proximity to the depot promises a stream of night trains whistling through your dreams if you don’t take advantage of the earplugs provided. (The hotel’s loft accommodations don’t have this problem.) My 10-year-old son rates these little silencers as “professionalquality.” With this savvy insight, we sleep soundly until morning, but I awaken to a startling question.

“Just what sort of palm trees will we be seeing in the desert?” Elliott asks, rubbing the sleep from his eyes. I realize my companion is poorly briefed for this trip. For his sake and mine, we begin our day with a tour of the splendid Museum of the Big Bend on the Sul Ross campus.

All museums are not equal, especially when it comes to engaging children, but Goldilocks would have pronounced this one “just right!” A lively balance of videos and interactive exhibits creates a three-dimensional understanding of the high desert’s natural and social history. A Quetzalcoatlus northropi soars overhead, its 34-foot wingspan in delightful competition with the 19-foot-tall anthropomorphic figures on a reproduction of the Tall Rockshelter pictograph wall. The model of the Texas pterosaur captivates, and so does the up-close view of the multihued rock art that is tucked away so high in the Davis Mountains that few will ever see the actual site. It inspires musings on the Indiana Jones-worthy mystery of its 500-1500 A.D. origins.

There are atlatls (I spied Elliott studying the throwing sticks a little too carefully) and arrowheads, conquistador armor, and Hadrosaur vertebrae, but we are both taken with a sprawling relief map featuring the geology, landmarks, and settlements of the Big Bend. The bird’s-eye-view topography features a tiny light at each point of interest. We don’t leave until we have pushed all of the dozens of buttons (and in every combination, to highlight the distance between points) and for the first time, I feel my son has some orientation as to where we are, where we’re going, and what miles and miles of Texas really means.

After lunch, we head out to the Woodward Ranch. Many area ranches are open to visitors who want to do some rock hunting, but we were drawn to the hills undulating beneath the bow of Cathedral Mountain—as appealing for the vistas as for treasures on the ground. Bumping off the highway onto the ranch road, we pass several antelope lounging in the noonday sun.

I barely manage to park the car before Elliott bolts into a canted, old gift shop chockablock with rocks, fossils, minerals, and curiosities, most of them found locally. Established in 1884, the Woodward Ranch has long been known as a rock hound’s paradise. In 1951, National Geographic featured the ranch and its owners, John F. Woodward Sr. and his wife, Mary Frances, in an article about rock hunting, which led to the Woodwards donating a 25-pound specimen of something known as a “pseudomorph after aragonite” to the Smithsonian. (A pseudomorph is a mineral that looks like another mineral that it has displaced by chemical action.) Two sizable chunks of the rare rocks-which look like melted lumps of cheese-remain in the ranch collection.

Fourth-generation rancher Trey Woodward and his wife, Jan, offer visitors the chance to ramble and root among tables heaped high with rough and sometimes polished stones or—beyond the gates—get down and dirty rock hounding. As Jan, a former teacher, walks us through a Geology
101 lesson, her enthusiasm holds the attention of a boy twitching to begin his quest. Fully briefed, we test our newfound ability to identify the number one attraction: red plume agate. Resembling a flat-bottomed biscuit with a furry bloom in its rough state, the famed agate earns its acclaim when sliced and polished to reveal fern-like, red veins suspended in a milky, opalescent background. The sharp-eyed and determined may also find labradorite, amethyst, opal, geodes, and more than 60 types of other agates on the hillsides. proper.

Issued a bucket and water spritzer (it’s easier to identify wet rocks), we set to the hunt, limited only by vehicle clearance and the sturdiness of our legs. The hours pass in a sort of sacred quiet as we crabscrabble about, getting up close and personal to everything from scat to tiny cactinot to mention a covey of quail that startles us into a fit of giggles. We haul pounds of agates and more back for sorting and identification. Just one caveat: Take extra water for your spritzers; kids who deplete their spray may resort to licking the rocks.

Before leaving town, we are split on whether to visit the CatchLight Gallery or Apache Trading Post. We compromise by visiting both. And really, what would a trip into West Texas be without a trading-post visit? For 30 years, the Apache has set the standard, recently raising the bar with the Spirit of the West Gallery inside and a free, continuous Marfa Lights video. Great jewelry and other geegaws prove almost as compelling as the adjacent Jack-assic Park, home to furry little burros braying to be scratched behind the ears and a photo-op that begs to become next year’s Christmas card. (You gotta admit having your kid stick his head into a prop that provides him with the body of a jackass is a stellar opportunity to outdo the neighbors.)

Monthly special exhibits and a surprising inventory make the CatchLight Art Gallery another not-to-be-missed window into the west. The 14-artist cooperative opened in October 2007 to feature a kaleidoscope of talent and media. On our visit, the gallery featured Marjie Erkkila’s royally proportioned silver jewelry, made with large rocks that she cut and polished herself; Terry Biegler’s stained glass and wire-wrapped jewelry; Nancy Whitlock’s bright pastels of cactus; and Merrian Sohl’s richly textured oils. The paintings, pottery, weavings, and lapidary are the works of artists who fuel their visions with the all’s-right-with-the-world West Texas light. There’s a deep breath of possibility captured in everything the CatchLight showcases; taking it all in somehow allows you to see more when you move on. As with everything in Alpine … just take your time.