Autos for the Ages 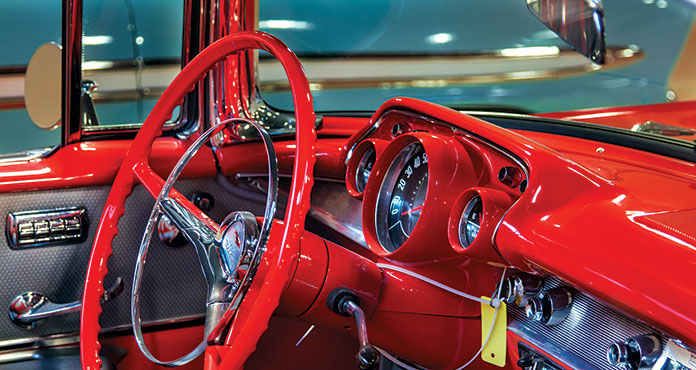 A 1956 sky-blue-and-white Chevrolet Bel Air Sport Sedan cruises a couple of laps around a San Marcos parking lot, its chrome bumpers gleaming in the sunlight, before finding the perfect parking spot.

It backs slowly into the space. The driver revs the engine one final time—as everyone else turns to see—and then lets it die with a low, muffled growl.

It’s a scene straight out of American Graffiti, only it’s taking place in the parking lot of Dick’s Classic Garage Car Museum. This monthly Saturday evening “Cruise In” invites car enthusiasts to show off their classic cars, listen to live music, maybe grab a bite from the Henry’s Restaurant hamburger stand, and do what car enthusiasts do whenever they get together: Lift the hood, rub down the fenders with soft chamois cloths, and lean proudly against their front bumpers.

Car collectors are a natural audience for Dick’s, but the appeal of the museum’s portrayal of the automobile and popular culture extends beyond motor heads. Inside the 43,000-square-foot museum are more than 80 vintage vehicles arranged chronologically. The display tracks the automobile’s evolution from the big, open machines of the early part of the 1900s to the wide-bodied cruisers of the mid-century and the sleeker, sharper vehicles of the jet age.

“The original idea was to start the collection at 1929, which was when I was born, and carry it on up through ’59,” says Dick Burdick, the man behind the museum. “But we have added cars from earlier years to help add context and tell the automobile story.”

The museum’s rare and classic cars include designs that have been lost to time, like the aristocratic elegance of the 1929 Stutz Model M Le Baron, while others remain familiar to this day, such as a sporty 1957 Ford Thunderbird, an iconic two-seater with restrained tail fins. Some of the vehicles—such as a 1930 Duesenberg Model J and a 1948 Tucker Torpedo (aptly named for its distinct, rounded front hood that included a third headlight in its center)—rank among the most sought-after collectibles in automotive history. 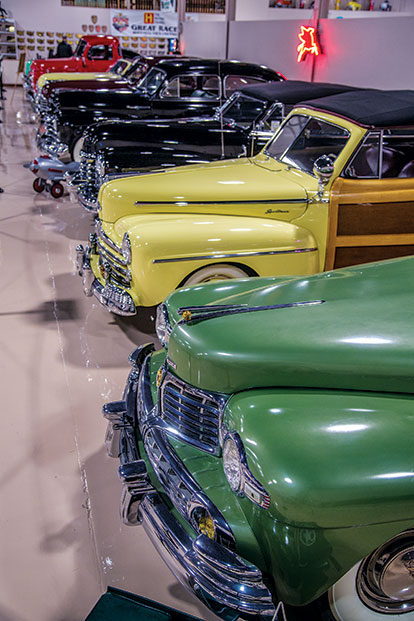 With nearly an acre of brightly lit exhibit space, there’s room for plenty of unusual extras, too, like a 1921 Stanley Steamer (a rare steam-powered auto) and one of the very first Oldsmobiles ever built, from 1901. “The Olds is just a buggy. It’s a horseless carriage, and it stayed in the same family until the 1980s,” says Burdick. “The fact that it was a one-owner car for 80 years is pretty remarkable.”

Naturally, it’s hard for Burdick to pick favorites, but he admits to having a person-al affinity for cars with artistic value. “To me, the real outstanding automobiles were built in the 1920s and ’30s,” he says. “Back then, you could see a car coming down the road a mile away and tell what it was.”

Automobiles have fascinated Burdick most of his life. As a boy in Cheyenne, Wyoming, he and a friend dismantled an old car in a neighbor’s backyard. “We never did figure out how to put it back together again,” he says. “But we learned an awful lot about automotive anatomy.”

Having been an avid car collector for more than three decades, Burdick once housed about 250 of them at his Central Texas Museum of Automotive History in Rosanky. That museum, which closed in 2012, showcased automobiles from throughout the 20th Century. Many of those vehicles now have a home at the San Marcos museum, which Burdick opened in 2009 with a focus on a more selective time period.

Just as important as these machines are the men and women behind their mechanical development, Burdick believes. The museum exhibits include information about pioneers of the industry, like Henry Ford, David Buick, and Walter Chrysler, as well as other important people who, quite literally, moved the country.

Dick’s also features a few antique motorcycles, road signs, gas pumps, and other memorabilia from the early- to mid-20th Century. The museum’s entrance, with its distinctive oversized awning, evokes a drive-in restaurant from decades ago.

The setting is part of the attraction for Dick’s monthly “Cruise In.” A steady stream of cars arrives from nearby towns, such as Wimberley and Seguin. Some are lowriders, some are tricked-out modern cars. Some are every bit as distinctive as the cars inside the museum.

In their element, the collectors eventually break away from their own vehicles and walk around. They do a lot of inspecting and taking pictures of the shiny cars. They examine the exposed engines. They talk shop and trade tips on restoration. And when someone revs an engine, everyone else turns to see.