Beaching on the Cheap 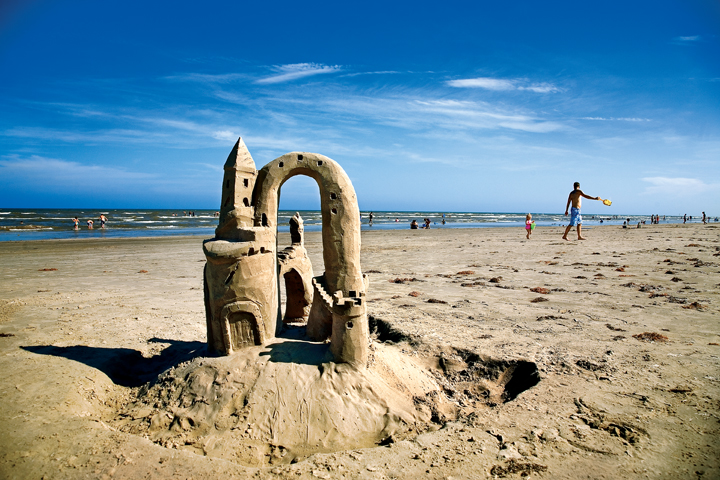 Signs of life on the beach: The sandcastle offers an opportunity to design, sculpt, and free-associate simul­taneously and in three dimensions. But never leave your sandcastle unattended; its life expectancy will be short (Photo by E. Dan Klepper).

I confess. I am a dreamer. A grasshopper in an anthill world. Each month, as soon as I pay the bills, I take the money left over and go hiking or mountain biking. Maybe go fishing. Or pitch a tent, build a campfire, and cook out. Some folks who know me substitute my sobriquet “grasshopper” with the more definitive “bum.” They can say what they will, but I prefer to live outside.

And once a year, I spend an idyllic stretch as a very specific kind of bohemian: the Texas Beach Bum.

The Texas Gulf Coast has a lot to offer—more than 360 miles of coastline, seven barrier islands, and more than 3,000 miles of bay-estuary-lagoon shores. All these provide hundreds of satisfying places to anchor your toes in the sand. And Mustang Island, particularly, lures me back year after year. The island and its only town, laid-back Port Aransas, features funky and affordable eateries, reasonably priced campgrounds and rental cottages, and abundant fishing, paddling, biking, and birding opportunities.

I confess. I am a dreamer. A grasshopper in an anthill world. Each month, as soon as I pay the bills, I take the money left over and go hiking or mountain biking. Maybe go fishing. Or pitch a tent, build a campfire, and cook out. Some folks who know me substitute my sobriquet “grasshopper” with the more definitive “bum.” They can say what they will, but I prefer to live outside.

And once a year, I spend an idyllic stretch as a very specific kind of bohemian: the Texas Beach Bum.

The Texas Gulf Coast has a lot to offer—more than 360 miles of coastline, seven barrier islands, and more than 3,000 miles of bay-estuary-lagoon shores. All these provide hundreds of satisfying places to anchor your toes in the sand. And Mustang Island, particularly, lures me back year after year. The island and its only town, laid-back Port Aransas, features funky and affordable eateries, reasonably priced campgrounds and rental cottages, and abundant fishing, paddling, biking, and birding opportunities.

Start with the main draw: the beach. Mustang Island, a sandy barrier of dunes and lagoons, is only 18 miles long and no more than two miles wide. Most roads lead to the water’s edge, either along the estuaries of Corpus Christi Bay or shin-deep in the Gulf of Mexico. The nearest beach access along the northern end of the island is at I. B. Magee Beach Park. This county park offers RV hookups, a bathhouse, and beach camping. Rates start at $12 a night for tent camping.

Mustang Island State Park occupies the island’s southern end and provides both beach and bay access. On the Gulf side, you’ll find five miles of sand and surf while on the bay side,  you’ll encounter a short channel, called Fish Pass, which makes an easy entry into the kayak-friendly lagoons. Primitive-camping permit fees start at $8 per night.

Elsewhere on the island, RV parks pitch slightly more expensive ways to crash but only a few offer direct access to the beach. The cheapest island overnight is a $12 beach-parking permit (purchase at island retailers) for three days of camping on the beach. Public rest-rooms and cold-water showers are available. Most of the beach along Mustang Island is open to vehicular use, meaning you can drive all of your stuff to a nice spot, park, and enjoy. Just negotiate loose sand carefully, avoid parking in the tide zone, and obey all traffic rules.

Once you lay claim to your own sandy Xanadu, get comfortable. My personal beachwear includes a pair of orange board-shorts, shades with a screaming green neoprene tether, a straw cowboy hat with elastic band to keep it anchored, blue flip-flops, and a thick layer of water-resistant sun block. I wouldn’t walk around my home wearing this getup but, hey, it’s the beach.

Either pack your favorite beach gear or outfit yourself on arrival. I keep my list short: big umbrella, fat-tire bicycle, barbecue grill or Coleman cookstove, and an ice chest. I also include a lawn chair (which I’ll anchor in about a foot of surf), a surf rod, and plenty of cut bait. If you enjoy the relaxation of fishing but not the constant reeling and casting, then surf fishing is for you. The slow pace (cast once then sit and wait) makes surf fishing feel like you’re actually doing something while doing almost nothing.

Zen, isn’t it grasshoppers? Calm surf, no incoming seaweed drifts, and a heavyweight but floppy bait might increase your chances of catching red drum, speckled trout, croaker, and gaff-top catfish. Keep your fishing license handy and pay attention to size and catch limits.

Ready to beachcomb? Some of the best shelling on the island occurs just after storms, but the island’s daily tide always delivers treasures, too. Check tide schedules online or in the local paper (Port Aransas South Jetty) and plan your beach walks accordingly. Beachcombers who peruse the stretch of sand between the water and the latest tide line can find sand dollars, sundials, cockles, moon snails, whelks, Campeche angel wings, and the beautiful disk dosinia.

But always avoid the purple, bubble-like critter that washes up daily on Mustang Island beaches. The Portuguese Man-a-War floats like a butterfly, but stings like a giant, angry lavender bee with stringy, venomous tentacles. Steer clear! And while I’m handing out beachcomber advice, make sure any whelks you collect are free of critters before you leave them in your pockets.

Between beachcombing expeditions, and after you’ve finished sculpting that sandcastle, it’s time to get your paddle on! Mustang Island’s bay side is included in the Texas Paddling Trails program, which provides maps and signage to create a rewarding paddling adventure. Paddlers can access Mustang
Island water trails at three locations off Texas 361: Fish Pass, the Island Moorings Marina, or Wilson’s Cut. Once on the water, you’ll enjoy gliding around small islands and along the shoreline following more than 20 miles of marked trails.

Now that you’ve experienced floating on water, why not get airborne? The father-and-son team at Brazos Helicopters conducts aerial island tours that depart from the Mustang Beach Airport. The Birdsell boys can elevate you for a simple beach fly-over or a search for sharks along the shores of nearby
St. Joseph Island. Or try Bryan Evans of Port A Parasail, behind Woody’s Sport Center on the island. Evans will launch you off his boat deck like a human kite.

Speaking of flying, take time to catch the evening antics of your favorite feathered friends at the Leonabelle Turnbull Birding Center, on the island’s bay side. With its triple-decker observation tower, the Center is an ideal spot for birding enthusiasts. Any migratory waterfowl passing over the island will
usually make a pit stop at the Birding Center’s lagoon, so serious birders often get a chance to extend their life lists. The center’s tower also ranks among the best spots on the island to watch the sun set over the bay.

Ready for dinner? Pick up a pound or three of fresh Gulf shrimp from Port A Seafood Company or, if you want a break from camp cooking, hit the island eateries. Start with a satisfying meal at Seafood and Spaghetti Works. Jay Kenigsburg’s family-owned Works, an island landmark, offers delicious, reasonably-priced cuisine featuring fresh seafood. Or go for the tuna tacos and a deep-fried avocado at Kody’s, another popular hangout.

Feeling like beef instead? Surf over to the Wild Horse Saloon and Grill and order the Stampede, a hand-pressed burger topped with Jack Daniels sauce, bacon, peppers, sauteed onions, onion chips, and chili. Continue your evening with a brew from the Port Aransas Brewing Company, a microbrewery
that serves some outstanding pilsners, stouts, bocks, and ales from eight brewing tanks. You also can select from about 100 bottled microbrews, imports, premiums, and elite beers. Order one of the stellar pizzas while you make up your mind.

Looking for nightlife? A dozen or so clubs feature music and entertainment. The Gaff is a rambling, rowdy, pirate-themed bar with an outdoor stage, and hosts one of the quirkier activities you’re likely to encounter: belt sander races (don’t try to figure this one out, just show up and watch). Need a cappuccino and a cinnamon bun the morning after? Bundy’s opens at seven a.m., and Tammy Bundy is on hand to serve fresh-baked goods along with breakfast. Or, just ask for a fruit smoothie with an espresso chaser.

When you’re ready to learn more about the coastal environment, enjoy a morning or afternoon touring the University of Texas Marine Science Institute and its Wetlands Education Center, a 3.5-acre living laboratory just east of town. Stroll along the boardwalks and explore the surrounding salt marsh or pause in the shade of the observatory platforms to survey the landscape. Check out the adjacent Visitor Center and its seven aquaria featuring Texas coastal habitat. Or catch a public lecture in the Center’s auditorium. There’s no charge!

Maybe culture and history are more to your liking. Visit the Port Aransas Museum, located in a beautifully restored island “kit house,” built in the 1900s, that served as home to several Port Aransas families as well as the island’s U.S. Coast Guard Station. The Museum, part of the Community Center complex, exhibits photographs, artifacts, and documents chronicling Port Aransas’ past.

The lore of Mustang Island will entertain as it informs. Since its founding in the first half of the 19th Century, residents have called the village Sand Point, Star, The Pass, Ropesville, and Tarpon. The island community sheltered about 300 residents by 1870. Port Aransas became the community’s name about
1910. These days, Port Aransas maintains its relaxed, 19th-Century ambiance by preserving historic architecture, protecting and promoting natural resources, and managing development.

Bohemians are known for their love of leisure. And beach bums, in particular, are not immune to the allure of hot showers and clean linens. So if you begin to feel salted and overly sanded while camping, check in to some proper digs. The Balinese Flats, a cool, calm retreat for the meditatively inclined, is a converted 1950’s motel reimagined as a private, harmonious blend of bayside simplicity and Mexican colonial décor.

If you’re traveling with pets, try A Laughing Horse Lodge, a collection of cowboy-kitsch cottages two blocks from the beach. Want to go old-school? Check into one of the recently renovated rooms at the Tarpon Inn, the island’s oldest standing structure. Built more than a century ago, the Tarpon Inn dispenses with telephones and TVs in exchange for rocking chairs and porch fans. Need a little high-tech while aligning your chakras? The Tarpon has wi-fi. And a new pool.

If you’re still not quite convinced to chuck your shoes (along with that weekend to-do list) and head to the beach, you might need more visualization. Try this: Close your eyes and take a big, deep breath as if you were diving underwater. Let the breath out slowly. Feel your body rising gently, floating,  breaking the surface of warm, salty foam as the noise and clutter around you recedes. Now, you’re gliding across the waves in your own special craft, its pleasant rocking sensation a lulling duet with the splendid sunrise and the call of gulls.

Are you ready for the Island?