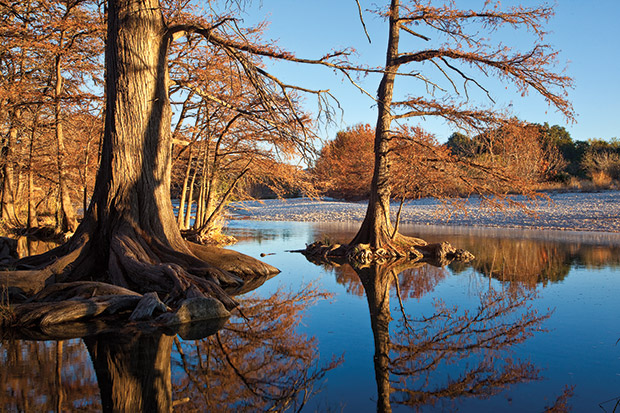 “But won’t it be cold?” my in-laws asked, when I first proposed the idea of a February getaway to Garner State Park. They were visiting from Wisconsin, where the idea of camping in winter is about as foreign as snow in South Texas.

But not to worry, I assured them: Even if the weather didn’t cooperate, we could always stay huddled together by the limestone fireplace in one of the park’s cozy wooden cabins, which were built by the Civilian Conservation Corps in the 1930s.

As it turned out, though, we didn’t need to worry about the cold, or just about anything else, either. The cold front that had been predicted for the weekend never quite blew in, and when we pulled into the cabin parking lot just in time for dinner on Friday night, the gauge on the dash in Grandma and Grandpa’s truck read a pleasant 65 degrees.

In anticipation of our arrival, the park staff had left the outside light on and the front door open. Our two preschoolers, Byrdie and Ana, rushed inside to check out their weekend playhouse, while Grandma and Grandpa got busy unloading the gear. Meanwhile, my wife Laura and I paused for a moment to breathe in the Hill Country air and catch a moonlit glimpse of Old Baldy, the majestic bluff that stands quiet watch over the campground.

We were already feeling overjoyed just to be out of the city (and the car), and then we walked into the cabin. Through years of family reunions and off-season adventures, I’ve stayed at my fair share of state park cabins, and to my mind none quite compare to these. Inspired by the pioneer architecture of the German immigrants of the region, the cabins have been thoughtfully updated with modern conveniences, but in such a way that the essential rustic spirit remains intact. Sure, it’s nice to have heating and air conditioning and brand-new stainless-steel kitchen appliances, but what I’ll really remember is the native limestone of the fireplace, which was quarried in the surrounding hills, and the bald cypress of the exposed beams, which was felled by Depression-era workers and trimmed and planed right here in the park. The experience of staying in these new-but-old cabins was like being transported back in time to 1941, when the park opened. Back then, the freshly finished cabins must have wowed new visitors the same way they wowed us today.

After a splendid night’s sleep with the cabin windows open, Byrdie and Ana woke us up at first light, eager to explore the caves we’d seen marked on the trail map left for us on the fireplace mantle. After breakfast, we found the trailhead marked White Rock Cave and started to climb … and climb … and climb.

It may be called the Hill Country, but for two kids ages five and three—and, if we’re being honest, for their parents and grandparents—the landscape definitely felt more like mountains. We quickly shed the layers of clothing we’d worn in anticipation of an early-morning chill, and Laura and I were glad to be able to split the child-toting duties with Grandpa. Still, the destination was well worth the 20 minutes of strenuous exertion, as the kids enjoyed pretending they were going on a bear hunt inside the cave, and the adults marveled at the view of the Frio River valley stretching for miles, seemingly right beneath our feet.

We were enjoying our hike so much that no one noticed when Byrdie and I managed to lead us on a wrong turn, which meant that our trek back to the park road took an hour longer than expected. By the time we made it back, Ana was sleeping in my arms, and the rest of us were ready for lunch and then for some cooling off down by the river.

In the summertime, the Frio River teems with squealing children and teenage tubers, and while that kind of youthful energy is definitely its own kind of fun, it was also nice to have the water completely to ourselves. And yes, it was a bit frío, but by that time the sun was high in the sky, and after a few minutes we forgot it had ever been cold to begin with. As the adults let the water ripple over our legs and the kids splashed around, we enjoyed our very own private moment of blissful summer vacation, right in the middle of winter.

Back at the cabin, after dinner we’d prepared outside over an open fire, we waited for the embers to die down enough to roast marshmallows. Three generations of our family sat at the picnic table and stared through the treetops at the stars just beginning to appear in the crystalline night sky.

“This,” Grandma said, holding her granddaughter in her lap, “was well-nigh the perfect day.”