Health and Happiness in Sulphur Springs 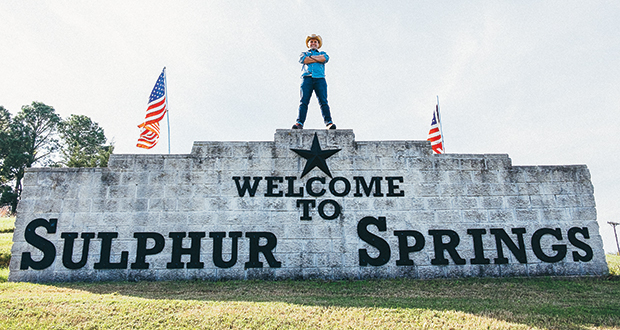 Back in the day, folks traveled from near and far to this Northeast Texas town to take a dip in the sulphur springs for their rumored healing powers. While those stinky springs may be dry, I found that this town still flows with culture, art, good eatin’, and the sweet aroma of Texas.

Chet Garner is the host of The Daytripper® travel show on PBS. To view the Sulphur Springs episode visit thedaytripper.com

9 a.m.: A crisp breeze greeted me as I started my day, causing my bones to yearn for a hot cup of coffee. Luckily, I spotted Coffee off the Square in a historic building just “off the square.” While the name calls it like it is, the coffee tasted delicious, and my giant homemade cinnamon roll was a good omen for an epic daytrip.

10 a.m.: I followed the “red brick road” to Celebration Plaza, the town’s historic square. But after circling the regal 1884 Hopkins County Courthouse a few times, I realized this “square” more accurately represented a pentagon with five full sides. Regardless, the lush lawn and stately Veterans Memorial made it an excellent center of town. I noticed two large mirrored boxes that seemed a bit modern for such a down-home Texas town. I peered at my reflection and suddenly heard the sound of a flushing toilet as a door swung open and a gentleman walked out holding his morning paper. I instantly realized these boxes aren’t just art but outdoor restrooms with two-way mirrored sides. The public can’t see in, but the user gets a full view of the square. And, yes,
I did give it a try.

11 a.m.: Interested in seeing more multipurpose art, I stopped into the Sulphur Springs Public Library to view the Leo St. Clair Music Box Collection. Started in 1919 by a World War I veteran after the Queen of Belgium gifted him a music box, the rotating collection has since grown to include over 150 music boxes as unique as Texas is wide. It was like walking through an art exhibit where all the sculptures make noise!

Noon: I tripped back to the square and gave a hearty “howdy” to the town’s favorite potato—the mascot of The Potato House, a stuffed-spud eatery where potatoes come filled with everything from broccoli cheese soup to chicken-fried chicken. I chose the “Easy Rider” piled high with jalapeños, hot sausage, and pepper jack cheese—it was definitely a “hot potato.” After devouring the entire thing, my mouth was on fire; luckily I knew exactly where to go for some relief.

1 p.m.: I headed to The Southwest Dairy Museum and Education Center for a scoop of vanilla ice cream topped with hot fudge and history. I meandered through the museum and learned all about the hard work that goes into producing milk and how the process has drastically changed over the years. Ice cream had never tasted so good or laborious. After working extra hard to milk a model cow, I decided that I had earned a second scoop.

3 p.m.: Full of calcium, I was feeling strong enough to reel in a whopper and headed north to Cooper Lake State Park. East Texas is known for producing some of the biggest largemouth bass in the country, and I was feeling good about my luck. I joined a number of anglers on a pier at the South Sulphur Unit of the park and cast my lure into the open water. Within minutes I had a white bass on the line. It was followed by a few perch and a catfish, making for a great couple hours of fishing.

It’s a shame that the healing springs are gone, but there’s still plenty of therapy to be found in this town’s art, wildlife, history, and food. And after a day exploring all of it, I felt better than ever. So whether you follow my footsteps or forge your own path, I hope to see you on the road.