From Food Trucks to Friezes 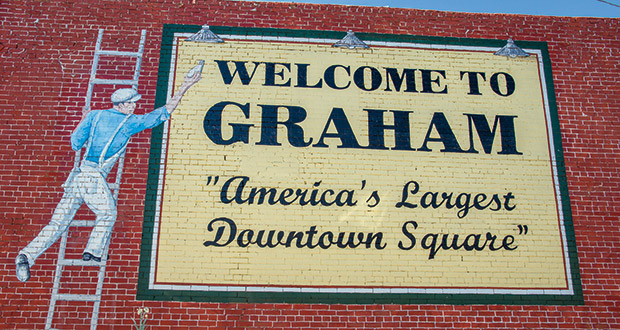 Traveling with a group of friends devoted to eating and exploring, I arrived in Graham on a sunny June day to attend the annual Food Truck Championship of Texas, which featured some four dozen trucks in heated competition. But it turns out we’d come to enjoy Graham—a town of some 9,000 people about an hour-and-a-half northwest of Fort Worth—for much more than a day of good eating.

Read more about places to eat, shop and catch a movie in Graham.

Organizers orchestrate this gastronomy event at the center of town on the Young County Courthouse Square, using a delicious, trendy hook—food trucks—to bring in adventurers who might not otherwise think to give Graham a look. Like my merry band of food fans, festival-goers come for the flavors but wind up struck by the surroundings and year-round attractions.

Nearly everything worth exploring in Graham is in or around the downtown square, which claims to be the largest in the United States. That we learned by reading a massive sign painted on a wall downtown, one of many painted images and/or messages on the exteriors of several downtown buildings.

The “America’s largest downtown square” sign at Third and Oak streets faces a terrific mural of 7UP’s vintage yellow-and-green logo, painted on the side of what was originally Graham’s Masonic Lodge. That 1900-era building also once housed city hall.

In fact, any way we walked along Oak Street led us to another portal into Graham’s past. We chose to roam north, past the century-old National Theatre, a movie house still showing first-run films. As we wandered, we noted a steady stream of customers heading into Pam’s, an old-school health-food store whose non-vitamin attraction for young and old is frozen yogurt.

Our destination, however, was Pratt’s Books at 502 Oak Street. The 1890s building was originally the home of Doty’s Grocery Store, where customers once tied their horses to the long-gone hitching posts, and in subsequent years it has housed a soda fountain, a pharmacy, and a children’s clothing store. The bookstore’s founder, the late Rozella Pratt, was a local book-lover who created a place for like-minded folks in the early 1980s.

“My mother-in-law’s love of books proved to be contagious, and my husband took to collecting, as well as assuming the role of book buyer,” said Gayle Pratt, who owns and runs the store today with her husband, David.

Browsing, it struck me that some of these books must have come from nearby Booked Up, the famous bookstore owned by author Larry McMurtry in his native Archer City.

“Of course, you can’t find a book person who hasn’t shopped at the iconic Booked Up,” Gayle confirmed, noting that the Pratts brought home boxes of treasures from an auction McMurtry held a few years ago. Gayle told me that the store has acquired many of its titles in world history, Eastern philosophy, and contemporary literature through its work with famous auction houses like Sotheby’s and Christie’s. “Our inventory is a result of a passionate quest containing equal parts of scouting, happenstance, relationship, and reputation,” she continued.

I found myself stuck in the Texana section, marveling at the abundance of titles covering the history of Young County and the region. Here were tomes full of John Graves’ and Elmer Kelton’s powerful prose, books documenting the history of all 254 Texas counties, and paperbacks and hardbacks alike about ranches and the Texas Rangers. Before I knew it, I’d spent an hour in a rocking chair, skimming the pages of a first-edition McMurtry book, which was out of my price range at more than $100.

Reluctantly, we left Pratt’s because we didn’t want to miss our chance to explore more Graham history just a few steps away at the Old Post Office Museum and Art Center. Opened as a post office from 1936 until 1992, the building came to life again in 2002 as a center of heritage and culture.

Inside, we were taken with one of the famous murals that came to decorate post offices across the nation during the Great Depression. Completed in 1939 by Alexandre Hogue, who was hired as part the government’s WPA relief program, The Oil Fields of Graham features bold scenes of workers against a backdrop of equipment on the landscape. Interestingly, there’s a stately looking, white-haired gentleman in a suit standing on the far left side of the mural.

“That’s Colonel Graham,” the museum’s director, Marlene Edwards, explained with a wry smile. “When the townspeople first saw the mural, they felt like the town founder should be recognized. So he was painted in.”

In what was the post office lobby, there is now a museum gift shop and displays of local history. We admired a case full of ornate spurs, boots, and hats belonging to a Graham resident named Dean Smith, who spent his career as a Hollywood film stuntman.

The museum features changing exhibits throughout the year. In a hallway just behind the art exhibit areas, a display of more than 100 vintage Young County photos tells the story of a growing community. And on the museum’s lawn, sculptures include a beautiful copper kinetic piece by Lake Buchanan artist Ralph Moresco and a striking depiction of a cowboy by his campfire by Throckmorton artist Joe Barrington.

But my favorite art display awaited discovery across the street at the 1932 Young County Courthouse, which offers a wealth of WPA-era friezes on its exterior. “The scenes tell the story of Young County,” said local historian Dorman Holub, who noted that a single artist was rarely credited for such
work and that a team of carvers was likely hired for the task. “The two men you see riding and walking with the wagon train are the Graham brothers. The cattleman overseeing his herd is Oliver Loving, the famous trail driver,” Holub explained.

Even minor elements deserve notice, such as smaller carvings of an Indian head and a buffalo head, as well as etched-glass sconces over the smaller doorways into the courthouse. Through the ornate bronze doors, the courthouse interior beguiles with its black marble details, oak paneling, and terrazzo and tiled floors.

Because it’s not easy to pack everything into a single day, the option to stay overnight won us over. We found a good night’s sleep just outside of town at the Wildcatter Ranch, a modern guest ranch with horseback riding, Jeep tours, hiking, and a steakhouse. Resting our heads inside cabins lavishly outfitted with Western décor, we dreamed about early Texas history and the folks who keep it ready for us to devour.